PSG vs RB Leipzig prediction: How will Champions League fixture play out tonight? 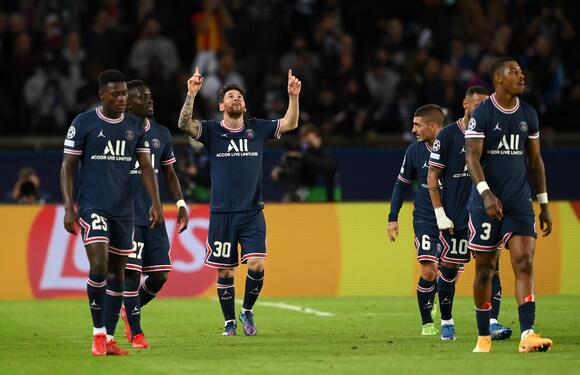 Paris Saint-Germain will look to build on their recent victory over Manchester City when they host RB Leipzig in the Champions League group stage this evening.

Lionel Messi scored his first goal for the club since his move from Barcelona in a memorable 2-0 win over the Premier League champions in Group A but Mauricio Pochettino’s side have had mixed results so far this campaign.

The French side were held by Club Brugge in their Champions League opener while their 100 per cent start to the Ligue 1 season was put to an end by Rennes before the international break.

Here’s everything you need to know before the match this evening.

When is PSG vs RB Leipzig?

The match will kick off at 8pm BST on Tuesday 19 October.

It will be shown live on BT Sport 3, with coverage starting from 7:30pm. BT Sport customers can also stream the match live on the BT Sport website and mobile app.

Although the Bundesliga side arrive in Paris pointless in Group A, RB Leipzig can still pack a punch and have the in-form former PSG player Christopher Nkunku in their ranks. PSG remain favourites however, and will have the edge in a close match. PSG 2-1 RB Leipzig

PSG travel to face Manchester City in their penultimate group stage clash in the Champions League looking to take a huge step towards qualification for the knockout stages. Mauricio Pochettino's side trail City by a point at the top of Group A after they were held in Germany by RB Leipzig on their last European outing earlier this month.
PREMIER LEAGUE・12 DAYS AGO
firstsportz.com

Manchester City vs PSG: The City of Manchester Stadium will witness a thrilling upcoming encounter between Manchester City and PSG. They’ll be meeting for their upcoming Champions League encounter of Group A. The match is scheduled to be played on Wednesday, November 25 at 1:30 AM as per IST. Manchester...
UEFA・10 DAYS AGO
goal.com

That's all from us this evening after yet another thrilling night in the Champions League. Liverpool boss Jurgen Klopp to BT Sport: "It was good, we could have done better and been more calm in the first half but we were a bit hectic. That is not unusual when you put a team out that has not played together a lot. Some people think we might play an easy game but we were not here for that, Anfield is sold out so we want to go [for it].
PREMIER LEAGUE・9 DAYS AGO

Gabriel Jesus completed Manchester City’s comeback to beat Paris Saint-Germain 2-1 and secure a place in the round of 16 of the Champions League as group winners on Wednesday.PSG is also sure of going through as runner-up in Group A thanks to Leipzig beating Club Brugge 5-0.The clash of the competition’s wealthiest teams, who are yet to win European football’s top prize, fully came to life in the 50th minute when Kylian Mbappe put PSG ahead after an interchange between Lionel Messi and Neymar.But the attacking dominance by City that defined the first half saw Raheem Sterling’s outstretched left...
PREMIER LEAGUE・9 DAYS AGO
NBC Sports

Manchester City vs PSG is a crucial game in the UEFA Champions League on Wednesday (start time 3pm ET with live updates via NBCSports.com) as both teams aim to secure a spot in the last 16. Pep Guardiola and Mauricio Pochettino have had plenty of epic battles in the UEFA...
PREMIER LEAGUE・10 DAYS AGO
AFP

Paris Saint-Germain have been milking the fact that they have this year's Ballon d'Or winner in their ranks, but Lionel Messi was crowned the world's best player for the seventh time in his glittering career entirely because of what he achieved elsewhere. At 34, perhaps Messi was principally rewarded for his enduring brilliance by jurors as he won the prize ahead of much-fancied rivals including Robert Lewandowski and Karim Benzema. However, he still scored 38 goals in his final campaign with Barcelona, was top scorer in La Liga, won the Copa del Rey and captained Argentina to victory at the Copa America. As he collected his prize in a ceremony in the French capital on Monday, PSG president Nasser al-Khelaifi was there and spoke of his "immense pride that one of our players has won the most prestigious and coveted award".
SOCCER・1 DAY AGO
CityXtra

Pep Guardiola's side are looking to guarantee top spot in Group A, as they prepare to come up against some of football's biggest names when Paris Saint-Germain travel to Manchester. Mauricio Pochettino watched his PSG team capitulate at the Etihad Stadium last May, as Manchester City secured a place in...
PREMIER LEAGUE・10 DAYS AGO

Champions League Matchday 5 is now behind us with some lopsided results. Manchester City took care of business at home to win Group A behind goals from Raheem Sterling and Gabriel Jesus. Thanks to RB Leipzig 5-0 win, PSG have book their tickets to the knockout stage as second-place finishers with a game to go.
UEFA・9 DAYS AGO
The Independent

If you are already bored of the interminable debate over whether Cristiano Ronaldo is a help or a hindrance to Manchester United, bad news, this is just the beginning. It is not going away any time soon, partly because he is not going away any time soon either. Just as Old Trafford prepares to enter the gegenpressing era and even more attention is paid to what he does off the ball, he keeps winning matches with what he does on it.That might ignore some of the particular nuances in the arguments over Ronaldo’s role in this team, on both sides...
PREMIER LEAGUE・1 DAY AGO
Absolute Chelsea

Mason Mount has lauded Chelsea teammate Kai Havertz for being unselfish for the 22-year-old's goal to help Thomas Tuchel's side to all three points against Watford. Havertz assisted Mount in the 29th minute for Chelsea's opener at Vicarage Road on Wednesday night. Marcos Alonso found the German, who could have easily taken a shot at goal, but he found the simpler pass across to Mount who slotted it past Daniel Bachmann in front of the travelling support.
PREMIER LEAGUE・2 DAYS AGO
90min.com

RB Leipzig vs Man City to be played behind closed doors

Bayern Munich can win Group E on Tuesday night with a positive result against Ukrainian outfit Dynamo Kyiv. The German champions suffered a shock defeat to Augsburg on Friday night, meaning their lead at the top of the Bundesliga is now just one point. In the Champions League they have won all four games, scoring 17 goals and conceding just two.
UEFA・11 DAYS AGO
The Independent

Chelsea can qualify for the round of 16 in the Champions League this evening as they host Juventus in the group stage.The defending champions occupy second place in Group H with nine points, trailing Juventus by three points with two matchdays left before the knockout stages.FOLLOW LIVE: Chelsea vs Juventus – build-up and team newsA draw tonight would see Chelsea progress, though the Blues can also go through with a defeat if Zenit St Petersburg fail to overcome Malmo.Thomas Tuchel’s players recorded a 3-0 victory at Leicester on Saturday as they remained top of the Premier League, three points...
PREMIER LEAGUE・10 DAYS AGO
CBS Sports

Juventus has had a turbulent campaign in Serie A this season, but has been remarkably successful in 2021 UEFA Champions League play. With four wins, Juve sits atop the Group H standings, but the club will put its undefeated streak on the line Tuesday against Chelsea. Frederico Chiesa struck what proved to be the game-winning goal at the start of the second half of the last meeting, but the Blues hope playing at home will tilt the scales in their favor this time around. You can catch the match live on Paramount+.
UEFA・10 DAYS AGO
The Independent

Michael Carrick takes charge of Manchester United for the first time after Ole Gunnar Solskjaer’s sacking on Sunday. The Red Devils find themselves in a desperate situation, having been thrashed by Watford at Vicarage Road, leaving them 12 points off leaders Chelsea in the Premier League and six points off fourth.FOLLOW LIVE: Team news and latest updates as Man United face Villarreal in Champions LeagueTheir position in the Champions League is far from comfortable either, and this game will go a long way to deciding who will top Group F and who will qualify, with United already holding a victory...
PREMIER LEAGUE・10 DAYS AGO
The Independent

Manchester United boss Ole Gunnar Solskjaer is likely glad to have had an interruption to the domestic game thanks to the international break, after receiving heavy criticism for some painful defeats to rivals earlier this month.They are back on the pitch this weekend though, away to Watford, and nothing other than a comfortable win will avoid the same comments and questions coming back his way, with United sixth in the Premier League table.FOLLOW LIVE: Teams and all the action as Man United head to WatfordWatford linger just outside the relegation zone after four defeats in five games, though Claudio Ranieri...
PREMIER LEAGUE・14 DAYS AGO
firstsportz.com

Barcelona played out a 0-0 draw against Benfica, and the second match of the Xavi-era has failed to bring out the desired result for the Catalan club. The result also means, that their chances of qualifying in the knockout stages of the Champions League depend on their result on the final match-day which is against German giants Bayern Munich.
UEFA・10 DAYS AGO
90min.com

Liverpool host Porto in the Champions League on Wednesday knowing they have already tied up top spot in Group B. With four wins from four in Europe, the Reds will compete in the knockout stages of the competition but still have two group games to contend with, starting with the Portuguese side at Anfield.
PREMIER LEAGUE・10 DAYS AGO
The Independent

Is Bayer Leverkusen vs Celtic on TV tonight? Kick-off time, channel and how to watch Europa League fixture

Celtic could be knocked out of the Europa League tonight if they lose to Bayer Leverkusen in Germany and results elsewhere do not go their way. The Hoops secured back-to-back wins over Ferencvaros to reignite their bid to reach the knockout stages of the competition and they will be looking to continue that momentum this evening. A defeat to the Bundesliga side, however, combined with a Real Betis win over bottom side Ferencvaros would see Celtic drop down into the Europa Conference League. Leverkusen sit fourth in the Bundesliga and were 4-0 winners at Celtic Park in the reverse fixture...
UEFA・9 DAYS AGO