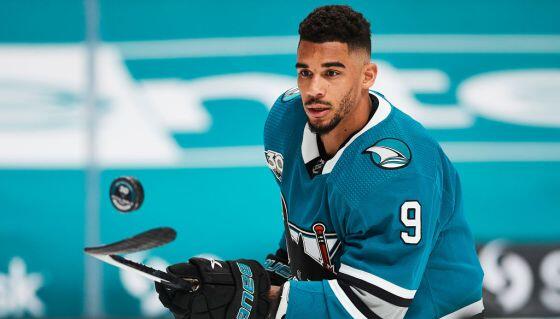 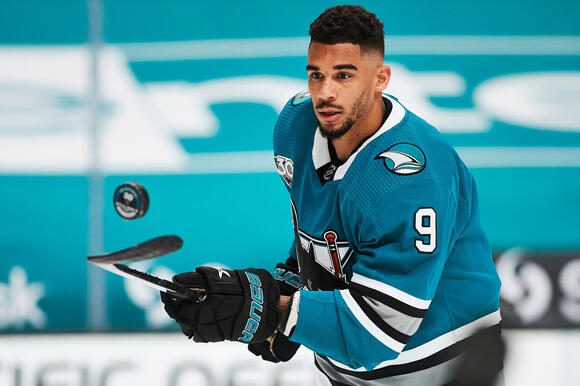 T he hits keep on coming for Evander Kane. Months after the San Jose Sharks’ forward filed for bankruptcy; he is being suspended for misrepresenting his vaccination status.

The NHL announced Monday that Kane would face a 21-game suspension after being investigated for submitting a fake vaccination card . Kane released a statement apologizing to his teammates for violating the NHL rule. Calling the move a” mistake,” he said he would work hard to earn his way back on the ice.

“During my suspension, I will continue to participate in counseling to help me make better decisions in the future,” said Kane in a statement. “When my suspension is over, I plan to return to the ice with great effort, determination, and love for the game of hockey.”

Canada’s CBC News reported he would forfeit over $1.6 million of his season salary to the Players’ Emergency Assistance Fund. He was expected to earn $7 million this season.

“While we are encouraged by Evander’s commitment to moving forward, we are extremely disappointed by his disregard for the health and safety protocols put in place by the NHL and the NHLPA,” the team said in a statement. “We will not be commenting further on Evander’s status before the conclusion of the NHL’s mandated suspension.”

A first-round draft pick in 2009, Kane is no stranger to controversy.

The Mercury News reported Kane filed for Chapter 7 bankruptcy earlier this year, estimating his total debt at $26.8 million and assets as $10.2 million. A creditor filed suit in May alleging he misrepresented his financial standing.

A prior investigation into allegations of betting on league games or even throwing games found no evidence to support the claims. While he listed $1.5 million in gambling debts in his bankruptcy filing, it does not appear there was anything inappropriate as it pertained to his league involvement.

News reports also indicate the league also found no evidence of abuse against his former partner.

Kane is one of a handful of Black players in the NHL. Estimates indicate less than 5 percent of NHL players are Black or people of color.

Fake vaccination cards have become an increasing issue with the enforcement of vaccine mandates and widespread misinformation about the efficacy of the COVID-19 vaccinations.

As previously reported by NewsOne , vaccine cards have become an increasing issue as mandates become more common. But such forgeries are illegal.

Creating or using a forged government document is a federal crime and could land you up to five years in federal prison. Federal statutes make it illegal to use any government seal in a forged document. All U.S. vaccination cards have the CDC logo in the right corner. If this shows up on a fake vaccine card, you are committing a crime. If you are caught with one, even if your intention is just to show as proof, you will be breaking the law and may end up being punished, according to U.S Federal statutes.

Read the U.S. Federal statute below…

“Whoever fraudulently or wrongfully affixes or impresses the seal of any department or agency of the United States, to or upon any certificate, instrument, commission, document, or paper or with knowledge of its fraudulent character, with wrongful or fraudulent intent, uses, buys, procures, sells, or transfers to another any such certificate, instrument, commission, document, or paper, to which or upon which said seal has been so fraudulently affixed or impressed, shall be fined under this title or imprisoned not more than five years, or both.”

After Pfizer’s News Of Promising Vaccine Results, Concerns Linger About Vaccine Equity for Under 12 Year Olds

NHL star Evander Kane’s ongoing divorce with ex-wife Anna is getting uglier. The San Jose Sharks player — in court documents obtained by TMZ — has accused his estranged wife of faking a pregnancy with their second child since July. The baby was reportedly due in February 2022. In the...
RELATIONSHIP ADVICE・11 DAYS AGO
Bay Area Sports Page

What Sharks sacrifice by assigning Evander Kane to Barracuda

When the final horn blew at the United Center on Sunday night, it primarily signified a 2-0 victory for the San Jose Sharks, but it also signified something else; Evander Kane’s 21-game suspension for violating the NHL and NHLPA’s COVID Protocols had officially expired. That morning, it was reported that Kane would be placed on waivers to be reassigned to the Sharks’ AHL affiliate, the San Jose Barracuda. Kane cleared waivers the next day and was officially reassigned on Monday.
NHL・5 DAYS AGO
nhltraderumor.com

With Evander Kane set to come back from suspension on Tuesday November 30th, one team is showing interest in making a trade for Kane. Kane was placed on waivers yesterday and he is expected to clear and will report to the Sharks AHL affiliate the San Jose Barracuda to get back into game shape.
NHL・6 DAYS AGO
markerzone.com

Evander Kane's tenure in the National Hockey League has been mired in controversy, but what has occurred over the last two seasons has really elevated the amount negative attention that he and, by proxy, the San Jose Sharks have garnered. The latest bit of controversy surrounds Kane and his estranged...
NHL・12 DAYS AGO

Will the Sharks Attempt to Trade Evander Kane?

There is credible chatter reaching Slap Shots that an Eastern Conference team has shown considerable interest in dealing for Evander Kane, the Sharks winger who on Nov. 30 is due to come off his 21-game suspension for violating NHL/NHLPA COVID-19 protocols, and no, it’s not the Rangers. Kane, who has...
NHL・8 DAYS AGO
wincountry.com

The San Jose Sharks will place Evander Kane on waivers, the San Jose Mercury News reported Sunday. If the veteran forward clears waivers, he will be assigned to the AHL’s San Jose Barracuda, per the report. Kane, 30, has not played this season and has not practiced with the Sharks...
NHL・7 DAYS AGO
thecapitalsportsreport.com

Two days after Doug Wilson announced he was taking a temporary leave, interim GM Joe Will has made his first transaction. The San Jose Sharks have released winger Evander Kane. He will now go through the waiver process. If he is not claimed by 2 pm on Monday, he will...
NHL・7 DAYS AGO

Which Eastern Conference Club is Interested in Evander Kane?

On Sunday, the San Jose Sharks placed Evander Kane on waivers. If he is not claimed by another team by Monday at 2 p.m. ET, he will be assigned to San Jose's AHL affiliate the San Jose Barracuda. Sharks assistant general manager Joe Will said he predicts Kane will be...
NHL・7 DAYS AGO
Bleacher Report

Evander Kane to Be Waived by Sharks, Will Be Assigned to AHL Affiliate

The San Jose Sharks are going to waive Evander Kane with the hope of assigning him to their AHL affiliate. Sharks assistant general manager Joe Will told reporters on Sunday that Kane will begin practicing with the San Jose Barracuda this week, assuming he clears waivers. Kane's agent, Dan Milstein,...
NHL・7 DAYS AGO
coloradohockeynow.com

Should the Avs put in a claim for Evander Kane?

Fairly big news today in the NHL, when it was revealed that the San Jose Sharks would be putting Evander Kane on waivers. The Avalanche will probably be near the bottom of the pack in the ability to even put in a claim if they wanted to, as they only recently claimed Nicolas Aube-Kubel on waivers from Philadelphia – and that moves you to the bottom of the pack when you do that.
NHL・7 DAYS AGO

Last week it was reported that the San Jose Sharks had three options with Evander Kane. Trade him, have him stay at home and pay him or put him on waivers. With no team wanting to touch his salary cap hit even with the Sharks offering to retain salary on a Kane trade, the Sharks have ultimately put him on waivers to see if any team will pick him up.
NHL・7 DAYS AGO
Pro Hockey Rumors

San Jose Sharks forward Evander Kane has cleared waivers and is expected to be assigned to the AHL. Previous reports have made it clear that the Sharks would retain salary in order to facilitate a trade of the veteran forward, and Kane’s new agent Dan Milstein of Gold Star Hockey told Rick Dhaliwal of CHEK TV that there are “multiple options on the table.” Milstein even included the Vancouver Canucks specifically as one of the teams he will be contacting as he tries to get his client a new home.
NHL・6 DAYS AGO
Yardbarker

SAN JOSE, Calif. – The San Jose Sharks have placed forward Evander Kane on waivers and plan to send him to the American Hockey League if he isn’t claimed by another team. Assistant general manager Joe Will said Sunday that Kane has been placed on waivers before his 21-game suspension for submitting a fake COVID-19 vaccination card ends. Kane was eligible to return to play Tuesday against the New Jersey Devils.
NHL・7 DAYS AGO
Mercury News

After suspension, Evander Kane looks ahead: “I served my time … and now I’m back”

SAN JOSE – Evander Kane is eager to turn the page on a year that included multiple investigations into his behavior by the NHL, frayed relationships with Sharks teammates, strife in his personal life, and a 21-game suspension for a violation of the league’s COVID protocol. Back on the ice...
NHL・5 DAYS AGO
markerzone.com

NO TAKERS FOR EVANDER KANE, ANOTHER PLAYER CLEARS WAIVERS

The San Jose Sharks placed Evander Kane on waivers on Sunday, and on Monday he was one of two players to clear. Kane, who was the Sharks leading scorer last season, has had a lot of run-ins with drama in his home life. The 30-year-old was suspended for 21 games due to violating NHL COVID-19 protocol. Along with this, the drama with his ex-wife has been nothing short of jaw-dropping. Kane is expected to joining the San Jose Barracuda of the American Hockey League on Tuesday.
NHL・6 DAYS AGO
ABC7 News Bay Area

Will ‘best behavior’ in AHL be enough for Evander Kane to resuscitate NHL career?

Evander Kane was the rare NHL prospect to bypass the minor leagues. A hockey prodigy, he made his professional debut with the Atlanta Thrashers in October 2009, just two months removed from his 18th birthday. But there Kane was Tuesday morning, wearing a yellow practice jersey with the logo of...
NHL・5 DAYS AGO