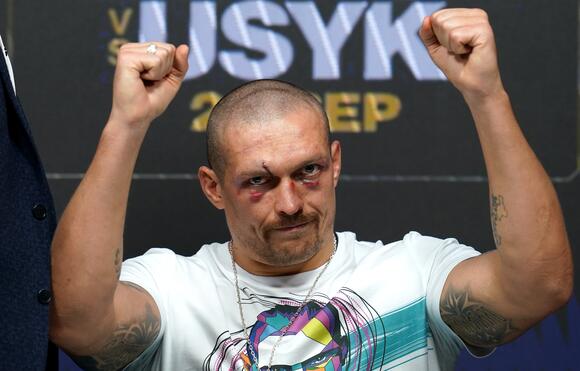 Tyson Fury has been warned that Oleksandr Usyk is “trouble for everybody” ahead of a future meeting to crown an undisputed heavyweight world champion.

The Ukrainian must negotiate a rematch against the Briton early next year, while Fury is due to meet his mandatory against Dillian Whyte.

But should both men avoid defeat, the pair could meet later in 2022, with former junior welterweight world champion Chris Algieri maintaining it will be an “interesting” fight.

“Usyk, hands down,” Algieri said after iFL TV asked who would be the trickiest heavyweight for Tyson Fury. “I think stylistically, Joshua falls into the hands of Tyson.

“Too athletic, too much movement, and too much conditioning. We saw Joshua get tired in the Usyk fight from that movement and that rhythm, making him miss.

“Usyk, I think is trouble for everybody. He’s very elusive and very good at changing his rhythm. Things that Tyson is good at. It’ll be an interesting fight.”

Meanwhile, Eddie Hearn has dismissed Fury’s rise up many pound-for-pound rankings after his dominant victory over Wilder.

Fury has risen to fourth in ESPN’s latest rankings , with a similar place in many other lists, prompting Hearn to label the move as “strange”.

“It’s very difficult to say anything negative about Tyson Fury at the moment, because you just get criticism for being ‘Ah, well, you’re just bitter, you’re just this’,” Hearn told Volume Sports .

“I do find it strange that you can continuously climb up a pound-for-pound ranking by beating the same person you’ve beat two-and-a-half years ago – and the only person. 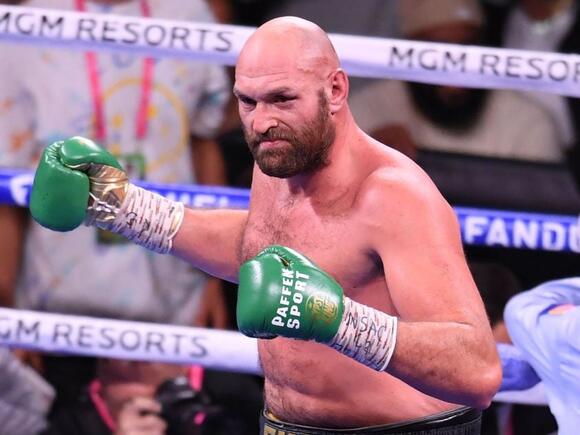 “But, you know, you look at the ESPN rankings, Tyson Fury beat Deontay Wilder, who he just stopped in [seven] rounds, in an absolute war, yet all of a sudden jumps up the pound-for-pound rankings [from sixth to fourth].

“Like, to be a heavyweight great, you have to have a brilliant resume that consistently beats the top heavyweights of your era. Now, don’t take nothing away from the performance, the last two performances.

“I mean, he probably won’t be happy with his last one because he was a bit wild. But it was a great fight.”

Tyson Fury says his own world heavyweight title ambitions do not "make much sense" as he must instead pick an "available" opponent for his next fight. Fury's US promoter Bob Arum has suggested the British star would ideally like to face Oleksandr Usyk in an undisputed world heavyweight title fight.
COMBAT SPORTS・12 DAYS AGO
Yardbarker

Tyson Fury has dismissed the threat posed by unified heavyweight champion Oleksandr Usyk. With Usyk having dethroned Anthony Joshua back in September, the Ukrainian has to be considered one of the best heavyweights on the planet, even if he’s naturally a cruiserweight. Usyk will head into his second bout with...
COMBAT SPORTS・11 DAYS AGO
The Independent

Tyson Fury promises to give Oleksandr Usyk ‘a good hiding’

Tyson Fury has predicted he will give Oleksandr Usyk a “good hiding” if they go head-to-head next year.Fury retained his WBC heavyweight title in October by stopping Deontay Wilder in the 11th round of their trilogy bout, a month after Usyk outpointed Anthony Joshua to win the WBA, WBO, IBF and IBO heavyweight belts.Joshua has activated a rematch clause to face Usyk again, likely next spring, while Fury has been linked with a bout against Dillian Whyte.A match-up with undefeated Ukrainian Usyk is still a possibility in the near future, however, according to Fury.“I thought I was going to...
COMBAT SPORTS・10 DAYS AGO
BoxingNews24.com

Tyson Fury wants Oleksandr Usyk next for all the belts

By William Lloyd: Tyson Fury says he’s only interested in two fights against IBF/WBA/WBO heavyweight champion Oleksandr Usyk and Anthony Joshua. Apart from those two, Fury says he has NO interest in fighting Dillian Whyte or Joe Joyce. Usyk (19-0, 13 KOs) isn’t likely to face Fury next, unfortunately, because...
COMBAT SPORTS・8 DAYS AGO

Tyson Fury has admitted that he doesn’t expect to fight Anthony Joshua as he believes his fellow British heavyweight will lose to Oleksandr Usyk for a second time. Joshua is looking to retake his world heavyweight titles when he fights Usyk next year, with a bout between the two expected to happen in either March or April.
COMBAT SPORTS・5 DAYS AGO
BoxingNews24.com

By William Lloyd: Tyson Fury coach Jorge Capetillo wants Anthony Joshua to step aside and let Tyson face IBF/WBA/WBO heavyweight champion Oleksandr Usyk for the undisputed championship next. Capetillo feels that Joshua (24-2, 22 KOs) needs to get a new trainer and rest from his loss to Usyk (19-0, 13...
COMBAT SPORTS・5 DAYS AGO
punditarena.com

Bob Arum has revealed that Tyson Fury would rather fight Oleksandr Usyk in a world unification heavyweight title bout than defend his WBC belt against Dillian Whyte. The WBC were expected to name Whyte as a mandatory challenger for Fury, but the governing body decided against doing so as they are currently involved in a legal battle with the man who holds their interim world heavyweight title.
COMBAT SPORTS・14 DAYS AGO
The Independent

Tyson Fury had apparently hoped to fight Oleksandr Usyk in a unification encounter after defeating Deontay Wilder, according to Bob Arum - but Eddie Hearn says there’s no chance of that being the next big heavyweight fight.Despite suggestions that Dillian Whyte will be the next opponent for Fury, the WBC opted against sanctioning the mandatory challenge between the two and Arum had suggested a line of Usyk, then Anthony Joshua fighting the winner and Whyte having to “stand in line and fight the winner ultimately”.Talking to Sky Sports, however, Joshua’s promoter rejected the notion and says the Brit is single-minded...
COMBAT SPORTS・14 DAYS AGO

Fury: If Joshua Loses To Usyk, Which I Think He Will, Our Fight is Dead in The Water

WBC heavyweight champion Tyson Fury is still looking for his domestic rival, Anthony Joshua, to step aside in order to allow a full division unification with IBF, IBO, WBA, WBO champion Oleksandr Usyk. Back in September, Usyk outboxed Joshua over twelve rounds to capture the four belts at Tottenham Hotspur...
COMBAT SPORTS・7 DAYS AGO
The Independent

Anthony Joshua admits he remains “angry” at how he performed in defeat to Oleksandr Usyk and is using the hurt to “fuel” him in the rematch. The Briton lost his heavyweight world titles to the Ukrainian at Tottenham Hotspur Stadium in September. But after triggering a rematch clause, AJ can...
NFL・21 HOURS AGO
MiddleEasy

Before it was even announced that they were going to be fighting, it was clearly that there was some beef between Jake Paul and Tommy Fury. Now it seems that this rivalry may bleed over into each man’s girlfriend too. By fighting Fury, Paul will be taking on an actual...
COMBAT SPORTS・22 DAYS AGO
boxingnewsandviews.com

The Teofimo Lopez vs George Kambosos Jr. fight for much of 2021 went into utter oblivion. Rescheduled date after rescheduled date due to the world situation. That said — pragmatically looking at it all in all — now the dust has settled — with a sense of measure in what transpired in the end — it was worth the wait and patience.
COMBAT SPORTS・4 DAYS AGO

Dillian Whyte says Tyson Fury has got "no choice" but to accept a WBC mandatory title fight and has vowed to brutally "finish" his British rival when they finally share the ring. The WBC have already publicly ordered Fury to face Whyte, the WBC interim champion, if he could not...
COMBAT SPORTS・14 DAYS AGO
bjpenndotcom

Boxing legend Tyson Fury claimed that his brother Tommy played possum against Anthony Taylor in order to secure the fight with Jake Paul. The younger Fury meets Paul on December 18 in what is expected to be one of the most highly-anticipated fights of the year to close out 2021. Back in August, Paul defeated former UFC welterweight champion, Tyron Woodley, for the biggest win of his career. On the undercard for that boxing event was a matchup between the younger Fury and Taylor, who is a former Bellator MMA fighter. Although Fury was a big favorite to defeat Taylor and he did so, he did not get the knockout despite having more skills, power, and experience in boxing. If you ask the older Fury, that’s because his younger brother was playing possum.
UFC・6 DAYS AGO
boxingnewsandviews.com

Former heavyweight title challenger Kubrat Pulev recorded a big win this weekend in maybe an unexpected way. In what was mostly boxing rules he took on former UFC (the sport of mixed martials arts) champion Frank Mir. The Bulgarian showed class perhaps in the Thanksgiving Holiday spirit to not follow...
UFC・4 DAYS AGO
MMAmania.com

Former UFC women’s bantamweight champion Miesha Tate will battle hot-and-cold division bruiser Ketlen Vieira for the right to stay alive in the 135-pound title chase, courtesy of the UFC Vegas 43 main event on Sat. night (Nov. 20, 2021) inside the promotion’s APEX facility in Las Vegas, Nevada. And like every UFC fight card — both good and bad — we’re here to help decide who wins and who loses tomorrow night in “Sin City.”
UFC・13 DAYS AGO
ClutchPoints

Boxing Hall of Famer George Foreman shockingly recalled the exact words of Muhammad Ali moments before they took on each other. Forty-seven years after he went toe-to-toe inside the ring with Muhammad Ali, George Foreman still vividly remembers how the late boxing icon tried to get under his skin just seconds before the opening bell rang.
COMBAT SPORTS・15 DAYS AGO
BoxingNews24.com

By Chris Williams: Terence ‘Bud’ Crawford is already looking past his opponent for this Saturday night in Shawn Porter by saying he wants superstar Canelo Alvarez. Like a glutton, Crawford (37-0, 28 KOs) isn’t satisfied with the filet mignon that’s on his plate this Saturday; he wants some tasty ribeye steak in targeting Canelo for that lottery money.
COMBAT SPORTS・14 DAYS AGO
dexerto.com

Heavyweight boxing champion Tyson Fury has responded to YouTuber Logan Paul’s challenge to a fight, ahead of younger brother Tommy’s bout against Jake Paul on December 18. After months of going back and forth with challenges over social media, the date for a fight between Tommy Fury and Jake Paul was finally set for December 18, and tensions are already ramping up.
COMBAT SPORTS・6 DAYS AGO
dexerto.com

Logan Paul has challenged heavyweight champion Tyson Fury to a boxing match, claiming he’s “gonna take [him] down” after Jake Paul defeats Tommy Fury. Following months of challenging each other over the internet, the date for a fight between Tommy Fury and Jake Paul was finally set for Saturday, December 18.
COMBAT SPORTS・21 DAYS AGO