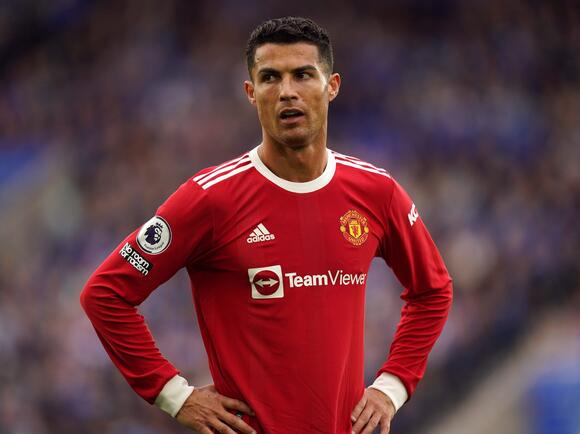 Cristiano Ronaldo has made Manchester United worse than it was last season.

That's according to the former Liverpool defender-turned-pundit Jamie Carragher, who claims the Portuguese forward has added to the club's problems of having too many individual stars.

Ronaldo returned to United three matches into the season and enjoyed a brilliant start to his second spell at Old Trafford, scoring three times in back-to-back wins over Newcastle United and West Ham.

However, Ole Gunnar Solskjaer's side has since failed to win any of its last three top flight games, losing two, while Ronaldo has yet to find the net again, leaving the club sixth in the table with eight matches played.

"Manchester United remain a team of individuals rather than a team. Cristiano Ronaldo has added to that rather than fixed it," Carragher told the Daily Telegraph of United, which finished second in the Premier League last season.

"That's why, despite a brilliant squad, they are not yet at the level of the other three. Dropping five points in their last two home games highlighted lingering inconsistency."

United was backed to challenge for the title following the arrivals of Ronaldo, defender Raphael Varane, and electric winger Jadon Sancho in the summer.

But the side's mixed start to the season has seen pressure mount on Solskjaer. The Norwegian's side now face a daunting month of fixtures, taking on Liverpool, Tottenham, Manchester City, and finally Chelsea in the league.

Liverpool are next up for the Red Devils on Sunday, and ahead of the clash, Carragher was asked to pick his combined XI from the two clubs.

In it, he included just two United players - Mason Greenwood and Bruno Fernandes - and omitted Ronaldo.

"I'm a massive Greenwood fan, I think he's a superstar, I really do," Carragher said on Sky Sports.

"How can you not put Ronaldo in, in terms of what he's done, legendary figure? I'm talking about actually right now, today, I'd have to have Greenwood."

Insider spoke to Mikaël Silvestre, who played with Ronaldo during his first spell at United. Silvestre said teammates used to kick Ronaldo in training when he was trying too many tricks. "If you ask him, he will tell you that there was no mercy," Silvestre said. Cristiano Ronaldo's teammates from...
PREMIER LEAGUE・8 DAYS AGO
Insider

Manchester United's soon-to-be new manager once called Cristiano Ronaldo "too old and too expensive." Ralf Rangnick made the comment when asked if he would sign Ronaldo for RB Leipzig in 2016. It is a worrying sign for the Portuguese forward's future at Old Trafford. Manchester United's soon-to-be new manager Ralf...
PREMIER LEAGUE・5 DAYS AGO
Insider

"It is unacceptable that the person responsible for awarding such a prestigious prize could lie in this way," Ronaldo said.
SOCCER・2 DAYS AGO

Liverpool are hoping to compound Everton’s misery when they travel to Goodison Park for the Merseyside derby this evening. Jurgen Klopp’s side are on a terrific run of form, having beaten Arsenal and Porto before thrashing Southampton last weekend all in the space of eight days. FOLLOW LIVE: Everton vs Liverpool – latest updatesLiverpool came into the midweek round of fixtures just two points adrift of leaders Chelsea and have already scored 39 goals in 13 Premier League games this season. However, for Everton, fortunes are far bleaker. Rafael Benitez is under increasing pressure after the Toffees limped to a...
PREMIER LEAGUE・1 DAY AGO
firstsportz.com

It had to be Cristiano Ronaldo, to score the opening goal for Manchester United in the UEFA Champions League encounter against Villarreal. The Portuguese superstar turned up yet again when his side needed him to, scoring from a dinked finish in the second half of the match. The goal came...
PREMIER LEAGUE・9 DAYS AGO
firstsportz.com

The 2021/22 summer transfer window was one of the craziest ever seen in football, as it saw two of the best players of the generation, Lionel Messi and Cristiano Ronaldo change clubs at the same time. While Ronaldo returned to his former Premier League club Manchester United, Messi took the huge leap of leaving his boyhood club FC Barcelona for PSG.
PREMIER LEAGUE・9 DAYS AGO
Daily Mail

Phil Neville has jokingly claimed that Cristiano Ronaldo owes him for helping him to secure his move to Manchester United, following the superstar's destructive cameo against his current club in 2003. Casting his mind back to a pre-season friendly between United and Sporting Lisbon, then Ronaldo's team, Neville recalled to...
PREMIER LEAGUE・13 DAYS AGO

Cristiano Ronaldo's transfer deadline day signing back in August has been blamed on ruining all of Ole Gunnar Solskjaer's plans at Manchester United, including the use of Jadon Sancho. Ronaldo has been one of the few bright sparks for United this season and saved them on a number of occasions,...
PREMIER LEAGUE・9 DAYS AGO
ESPN

Count the Ballon d'Or as one of those grand old institutions that's insanely popular. There are several reasons for it, too. There's history: The Ballon d'Or dates back to 1956, which means it predates the European Championships, yellow and red cards, substitutions, color TV, remote controls and of course, FIFA (the video game). There's the fact that top players really, really care about winning it: Clubs mount campaigns on behalf of their star players, guys like Cristiano Ronaldo (despite already having five of these at home) get annoyed when it gets canceled (like it did last year due to the coronavirus pandemic), while Bayern Munich striker Robert Lewandowski's face lit up like a child hearing reindeer footsteps on the roof when he found out he was among the favorites.
MLS・2 DAYS AGO
The Independent

The more things change, the more they stay the same. There was a different system, a different starting line-up and a different ex-player in a club suit and tie inside the technical area but, for the fourth of Manchester United’s five games in Group F to date, there was a crucial late goal from Cristiano Ronaldo.Another Ronaldo late show against Villarreal and a welcome first goal for Jadon Sancho in the dying embers ensured Michael Carrick’s first game in caretaker charge saw him apply the finishing touches to arguably the one thing that was going well for Ole Gunnar...
PREMIER LEAGUE・9 DAYS AGO
BBC

Manchester United moved into the Champions League last 16 thanks to two late goals against Villarreal in Michael Carrick's first game as caretaker manager. Cristiano Ronaldo maintained his record of scoring in every game in this season's competition when he lifted the ball over goalkeeper Geronimo Rulli in the 78th minute, after Fred had dispossessed Etienne Capoue.
PREMIER LEAGUE・9 DAYS AGO

When Thomas Tuchel comes in after games and scans the other results, he doesn’t automatically go to Liverpool or Manchester City. At least not yet.“There are some teams behind us who show consistency, who show quality, who show determination,” the Chelsea manager said last week. “This is what it is. You have a right to be proud of your competition here, in the Premier League, and for us it feels good because we are in the middle of that race and we want to stay here. I don’t know if it will settle down.”There is a bit of a...
PREMIER LEAGUE・1 DAY AGO
The Independent

Chelsea centre-back Thiago Silva has revealed his side's game plan to halt Cristiano Ronaldo in his tracks in their clash with Manchester United on Sunday afternoon. The Blues will host the Red Devils at Stamford Bridge on Sunday in matchday 13 of the 2021/22 Premier League campaign. Thomas Tuchel's boys...
PREMIER LEAGUE・4 DAYS AGO
Yardbarker

Liverpool and Egypt winger Mohamed Salah came 7th in this years Ballon D'or, with Cristiano Ronaldo finishing 6th and Jorginho finishing in 3rd place. Liverpool fans have no reacted well to the shocking, yet not surprising news. Despite a continuous of record breaking, dragging a depleted Liverpool side to third...
PREMIER LEAGUE・3 DAYS AGO
The Guardian

Cristiano Ronaldo scored twice, including the 800th goal of his career, as United recovered from conceding a bizarre early goal to beat Arsenal
PREMIER LEAGUE・5 HOURS AGO
San Diego Union-Tribune

Cristiano Ronaldo passed the 800-goal mark for club and country, scoring twice as Manchester United beat Arsenal 3-2 in an incident-packed Premier League match on Thursday. - Ogden: Ronaldo proves worth to Rangnick on record night. - Can Ronaldo reach 1,000 goals before he retires?. - ESPN FC 100: The...
PREMIER LEAGUE・1 DAY AGO