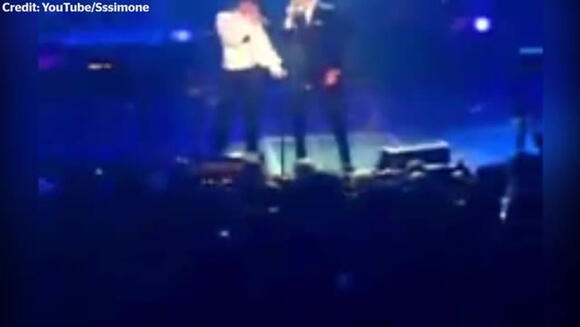 Susan Sarandon has opened up about her final phone call with David Bowie before he died in 2016.

The Thelma & Louise star dated the musician after they starred together in the 1983 horror movie The Hunger. Bowie went on to marry supermodel Iman in 1992 and he died of liver cancer in 2016.

Recalling their last in-person meeting at the New York premiere of his musical Lazarus , Sarandon said: “I was fortunate enough to be closer to him right before he died, the last couple of months. He did find me again. We talked to each other and said some things that needed to be said.”

She told The Mail On Sunday ’s You magazine of their final phone call, which happened a short while later: “I wasn’t sleeping so I took a pretty strong sleep aid. And I had this dream that David had called me and that we’d had this conversation. Then later I thought, ‘Did he actually call me?’

“And I went to my phone and he had. But I have no recollection of what that conversation was.”

Sarandon added: “He died a week later. It’s all so frustrating.”

The actor also praised Bowie’s widow Iman, saying: “I love his wife Iman, someone who was so equal in stature to him. That was clearly who he was destined to be with. And I’ve kept in touch with her.”

Why would you even come out and say this? Ah...celebs trying to maintain relevance. miss on that one

another Hollywood actor with no career left.

Hoda Kotb Gets Emotional as Iman Remembers Late David Bowie: 'The Only Thing We Have Is Memories'

Hoda Kotb was brought to tears when Iman opened up about the love she holds for her late husband David Bowie. During Iman's Wednesday morning appearance on Today, the supermodel got candid about her marriage with the legendary musician. "You put his cologne on you for years after he passed...
CELEBRITIES・14 DAYS AGO
Insider

Iman is sharing details about the "eternal love" between her and the late David Bowie. The supermodel told People that she still "feels married" and doesn't plan to remarry. The couple were married for 26 years before Bowie died six years ago. Iman says her love with David Bowie is...
CELEBRITIES・14 DAYS AGO
NBC New York

Iman Says She Won't Remarry After David Bowie: ‘I Wait Until I Meet Him Again'

Iman has no plans to marry again after losing husband David Bowie to cancer six years ago. The 66-year-old entrepreneur and retired supermodel shared on TODAY Wednesday that she had an immediate answer when she was asked by their daughter, Lexi Jones, 21, if she would ever get remarried following the death of her husband of 24 years.
CELEBRITIES・14 DAYS AGO
wiltonbulletin.com

All products and services featured by Variety are independently selected by Variety editors. However, Variety may receive a commission on orders placed through its retail links, and the retailer may receive certain auditable data for accounting purposes. In all the decades she’s been in the fashion and beauty business, Iman...
RETAIL・14 DAYS AGO

Iman’s debut fragrance, Love Memoir, is nearly here — and it’s an emotional tribute to her late husband David Bowie. The 66-year-old model, who was married to the late musician from 1992 up until his passing in 2016, set out to create a scent that not only reminded her of Bowie, but also was a “tribute” to love in general.
BEAUTY & FASHION・14 DAYS AGO
go955.com

David Bowie‘s widow, Somali-born supermodel Iman, has just released a fragrance called Love Memoir that she says is an homage to her “epic romance” with and “everlasting love” for her late husband, who died of liver cancer in 2016 at age 69. Iman tells People that creating fragrance, which is...
CELEBRITIES・14 DAYS AGO
Vanity Fair

All products featured on Vanity Fair are independently selected by our editors. However, when you buy something through our retail links, we may earn an affiliate commission. Iman, like so many with a second home outside New York City, suddenly found herself upstate during the onset of the pandemic—a temporary escape into rural living that stretched on for months. The march of time was hard to ignore. “It’s a very special property because it really has these beautiful mountain views, and the sun sets every day behind those mountains,” Iman explains in a phone call from the house that she and her late husband, David Bowie, built together some eight years ago. In a way, the landscape reminds her of Tuscany, where the couple married in 1992: the supermodel bride in Hervé Léger, the rock star in Thierry Mugler. (Teddy Antolin, the hairdresser who played matchmaker for the pair years earlier, styled her cascade of curls.) But following Bowie’s death from cancer in 2016—a devastating loss the world over, but especially at home—Iman found the upstate place to be heavy with memory.
NEW YORK CITY, NY・14 DAYS AGO
ABC News

Iman has unveiled her first fragrance inspired by her love for David Bowie. The supermodel and activist posted a stunning photo on Instagram of herself holding the new Love Memoir eau de parfum along with the caption, "My love memoir lives because I live." Launched on HSN, the latest fragrance...
BEAUTY & FASHION・14 DAYS AGO

David Bowie Documentary in the Works

The David Bowie albums you should definitely own

While most of his peers softened into water-treading middle-age, David Bowie’s view on art was that it was almost worth drowning for. “If you feel safe in the area that you’re working in, you’re not working in the right area,” he once advised. “Always go a little further into the water than you feel you’re capable of being in. Go a little bit out of your depth. And when you don’t feel that your feet are quite touching the bottom, you’re just about at the right place to do something exciting.”
MUSIC・14 DAYS AGO
GeekTyrant

Director Brett Morgen, who brought us Kurt Cobain: Montage of Heck, Jane, and The Kid Stays in the Picture, is finalizing a top-secret David Bowie documentary based on “thousands of hours of rare performance footage of the musician, most of it previously uncirculated.”. Morgen has been working on the doc...
MOVIES・7 DAYS AGO
InsideHook

What Can We Expect From a Forthcoming David Bowie Documentary?

The long career of David Bowie includes a number of high points, both on record and on the screen. And a forthcoming documentary might well see those two strains of his life converge, albeit posthumously. Writing at Ultimate Classic Rock, Jen Austin has details on an untitled project that’s attracting some pre-release buzz. Why? Director Brett Morgen has had access to a host of previously-unreleased footage of Bowie — and he’s been working on this project for the last four years.
MOVIES・11 DAYS AGO

Gene Simmons has been very open on his feelings about anti-vaxxers and even said at one point he wasn't 'worried if an idiot gets COVID and dies.' Also very open about his stance on COVID-19 vaccines is Ted Nugent, who had a lot to say in a recent interview regarding Simmons.
CELEBRITIES・2 DAYS AGO
thedigitalfix.com

Two of Arnold Schwarzenegger’s five children have followed in his acting footsteps – Patrick Schwarzenegger and Joseph Baena. And five years ago, Baena recreated one of his father’s most memorable scenes from 1991’s Terminator 2: Judgement Day. Now on the set of his new movie, Baena is once again channeling his famous father.
MOVIES・5 DAYS AGO
Popculture

Indian actor Yusuf Hussain has passed away at the age of 73 after contracting COVID-19. The Tribune India reports that Hussain, best known for his roles in Dhoom 2, Raees, and Road to Sangam passed away on Saturday at Lilavati Hospital in Mumbai. His son-in-law, filmmaker Hansal Mehta, who is...
PUBLIC HEALTH・28 DAYS AGO
Outsider.com

“Happy Days” star Erin Moran most notably played the beloved Joanie on the popular TV series. She was perfect in her role as the sister of Richie and brought a fresh element to “Happy Days.” Though the actress struggled in her offscreen life with addiction, she is still remembered for her work on the beloved show.
CELEBRITIES・5 DAYS AGO

Natalie Wood's sister says Christopher Walken spoke to detectives working her reopened case, but made them promise not to reveal what he said

The circumstances around Natalie Wood's 1981 death have long been the focus of intense speculation. The actress was yachting with her husband and co-star Christopher Walken when she disappeared and drowned. In an interview, Natalie's sister, Lana Wood, told Insider that she doesn't hold Walken responsible. The 1981 drowning death...
CELEBRITIES・13 DAYS AGO
Hello Magazine

Carrie Underwood's exciting update on her much-loved activewear brand, CALIA, was tainted with something unexpected on Friday, when she revealed her new winter range, would be her last. The star looked glowing in new snapshots promoting the line and all the new holiday collection pieces. But fans were saddened to...
BEAUTY & FASHION・5 DAYS AGO
thebrag.com

During an appearance on BBC Radio, Paul McCartney has opened up about the “cruel” and “nasty” behaviour of his late Beatles bandmate John Lennon following the group’s breakup. When asked about his song ‘Too Many People,’ McCartney replied (via Ultimate Guitar): “‘Too Many People,’ this song was written a year...
CELEBRITIES・28 DAYS AGO
HollywoodLife

Learn about Taraji P. Henson’s son Marcell Johnson, who she welcomed with her late high school sweetheart William LaMarr Johnson. Award-winning actress Taraji P. Henson did not let National Sons Day pass this year without paying homage to her son, Marcell Johnson. The Hollywood star, 51, welcomed her son, 27, with the late William LaMarr “Mark” Johnson, her high school sweetheart who was murdered at the age of 34 in 2003. In an Instagram post on National Sons Day in September, Taraji celebrated Marcell, calling him her “heart.”
CELEBRITIES・17 HOURS AGO