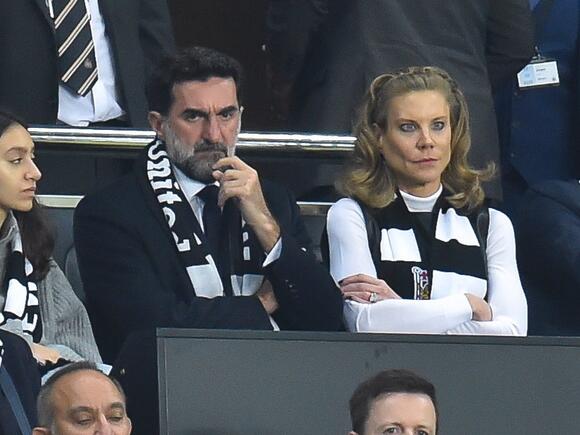 It is understood clubs held an emergency meeting to impose a freeze on any of them agreeing to commercial arrangements with businesses their owners are associated with.

Newcastle were joined by Manchester City in resisting the move to prohibit clubs agreeing to related-party transactions.

But it passed with 18 votes in favor as Newcastle opposed and City abstained after they questioned the legality of the ban.

Since being bought by Abu Dhabi's Sheikh Mansour in 2008, City has amassed sponsorships from companies linked to the emirate with Etihad Airways having the naming rights to the stadium and appearing on team jerseys.

City have always insisted they are paying fair market value rather than inflated fees for sponsorship to provide revenue to allow the club to comply with financial regulations.

Premier League rivals are worried Newcastle will use friendly sponsorship deals with related parties to help it comply with financial fair play rules that are in place to prevent rich clubs from spending unchecked. Under league rules, clubs are allowed to make losses of £105million over a rolling three-year period.

Newcastle became the Premier League's second club to fall under state ownership when it was bought by Saudi Arabia's sovereign wealth fund two weeks ago.

The Public Investment Fund provided the league with legally binding guarantees that the kingdom does not own the club, while being unable to say publicly how that fits with the company board being headed by the Saudi crown prince and mostly featuring government ministers.

The vote by clubs on Monday prevents Newcastle immediately bringing in sponsorship linked to PIF while a league working group works on new longer-term regulations.

It was not immediately clear whether the Premier League would deem any company funded by the Saudi state as being associated to PIF.

Chelsea welcome Manchester United to Stamford Bridge in the Premier League on Sunday afternoon. Thomas Tuchel's Blues are leading the way on 29 points after 12 games, losing only once back in September to Manchester City. While Manchester United are under caretaker Michael Carrick, with Ralf Rangnick set to take...
PREMIER LEAGUE・12 DAYS AGO
AFP

As Barcelona and Spanish champions Atletico Madrid scrap for a place in the Champions League last 16 this week, the Premier League's four participants can take it easy knowing their places in the knockout stages are already guaranteed. This week financially stricken Barca, Atletico, Sevilla and Villarreal are all in serious peril of bowing out at the group stage of the Champions League.
PREMIER LEAGUE・2 DAYS AGO
firstsportz.com

Mikel Arteta’s Arsenal back in the winning ways courtesy of goals from Bukayo Saka and Gabriel Martinelli. Eddie Howe on the other hand, should be proud of his team in the first half, however Arsenal simply outclassed them in the second half. Player ratings below – Arsenal. Aaron Ramsdale –...
PREMIER LEAGUE・11 DAYS AGO
newschain

Premier League chief executive Richard Masters says Newcastle’s owners can be removed should the Saudi state be found to control the club. Newcastle were taken over by a consortium led by Saudi Arabia’s Public Investment Fund – who the country’s Crown Prince is chairman of – last month. Masters said...
PREMIER LEAGUE・12 DAYS AGO

NEWCASTLE’s £300million Saudi takeover would NOT have been waved through by a proposed new owners’ test for football. Former Sports Minister Tracey Crouch and her 'fan-led review' team have recommended a new comprehensive process for the entire game. In order to be approved by the proposed new independent regulator who...
WORLD・14 DAYS AGO
90min.com

Newcastle travel to face Arsenal in the Premier League this weekend as Eddie Howe looks to haul the Magpies off the foot of the table heading into a busy month of fixtures. The former Bournemouth boss could not be in the dugout for his side's 3-3 draw with Brentford last time out after he contracted COVID-19, casting a keen eye from home as Newcastle's defensive frailties were laid bare.
PREMIER LEAGUE・13 DAYS AGO
CBS Sports

The Premier League is back in action on Saturday. Current Records: Newcastle United 0-6-6; Arsenal 6-4-2 Newcastle United needs to shore up a defense that is allowing 2.25 goals per matchup before their contest on Saturday. They and Arsenal are meeting up for their first leg of the season at 7:30 a.m. ET at Emirates Stadium. Newcastle hasn't won a game against Arsenal since April 15 of 2018, but they'll be looking to end the drought.
PREMIER LEAGUE・12 DAYS AGO
newschain

Mikel Arteta has admitted Newcastle’s riches will force the rest of the Premier League to react to the emergence of another potential powerhouse. The Magpies’ new owners, who have the backing of Saudi Arabia’s Public Investment Fund, have big plans for the ailing Tyneside giant, which spent much of previous owner Mike Ashley’s 14-year reign treading water.
PREMIER LEAGUE・12 DAYS AGO

Our betting guru Jones Knows thinks Newcastle can end their long wait for a win this season at Arsenal. Check out his predictions and betting angles on all 10 games. That was a huge reality check for Arsenal at Liverpool last weekend. A 4-0 drubbing identified just how far away...
PREMIER LEAGUE・13 DAYS AGO
Sunderland Echo

Chatham and Aylesford MP Crouch chaired the review panel, which has published 47 recommendations designed to make English football more sustainable. Central to the proposals is the creation of an Independent Regulator for English Football (IREF), which would have financial oversight of the sport at the professional level and license clubs in the top five tiers of the game.
UEFA・13 DAYS AGO
SPORTbible

Newcastle United want to bring in Manchester City left-back Oleksandr Zinchenko in the January transfer window, according to reports. After being taken over by the Saudi Public Investment Fund and the Reuben Brothers, Newcastle are expected to be active in the transfer market. And as per the Daily Mail, Newcastle...
PREMIER LEAGUE・12 DAYS AGO
Taylor Daily Press

From Premier League NBC has signed a new mega deal with Universal. The BBC has reported that the television network will pay less than 37 2.37 billion over the next six years to broadcast matches from the English top competition in the United States. NBC Universal had already held the...
PREMIER LEAGUE・10 DAYS AGO
LFCTransferRoom

This weekends Premier League fixtures are the start of what is the busiest period of the season, as clubs look to start making their intentions known. Chelsea sit top of the league, but face a Manchester United that are looking to go in a different direction. Liverpool and Manchester City are not too far behind but have potential banana skins at home.
PREMIER LEAGUE・11 DAYS AGO
goal.com

Should Premier League clubs take a look at Sebastien Haller?

Does the ex-West Ham United striker still have something to offer in the top flight?. After a failed stint in the Premier League with West Ham United, Sebastian Haller is playing at the peak of his powers, with the forward now creating a habit of dominating headlines at Ajax. According...
PREMIER LEAGUE・11 DAYS AGO
NJ.com

Arsenal, led by forward Pierre-Emerick Aubameyang, faces Newcastle United in an English Premier League match on Saturday, November 27, 2021 (11/27/21) at Emirates Stadium in London, England. Fans can watch the match for free via a trial of fuboTV. Here’s what you need to know:. What: English Premier League. Who:...
PREMIER LEAGUE・11 DAYS AGO
Tribal Football

Newcastle United boss Eddie Howe insists his players are Premier League class. After defeat at Arsenal, Howe was asked about the squad he must work with between now and then. He said: "I think my own experience has helped me in that I know that you can achieve some remarkable things in football if you believe and stay united.
PREMIER LEAGUE・11 DAYS AGO
90min.com

The Premier League is without doubt the biggest and most competitive league in the world, and club owners in England are often at the center of the attention from the media, fans and former players. There are a number of owners who are loved by the club faithful, but not...
PREMIER LEAGUE・10 DAYS AGO
theedgemarkets.com

NEWCASTLE, England (Dec 1): Newcastle United must now do what no other team in Premier League history has achieved if they are to avoid relegation -- survive after failing to win any of their first 14 games. A 1-1 home draw with fellow strugglers Norwich City on Tuesday extended their...
PREMIER LEAGUE・8 DAYS AGO
The Guardian

Another game, another goal for Dusan Vlahovic. The Serb scored his 12th of the season in Fiorentina’s 3-1 win over Sampdoria on Tuesday night to open up a two-goal lead between himself and Ciro Immobile in the race for the Capocannoniere. Whether Vlahovic will still be in Italy when the award is given out is another matter. He is a wanted man in England and for good reason. Arsenal and Tottenham are apparently interested in the 21-year-old, with Spurs reportedly making him their top January target as the long-term successor for Harry Kane. Vlahovic will not come cheap but, with just 18 months to run on his contract and a reluctance to put pen to paper on a new deal, Fiorentina’s stance on their prized asset may soften in the new year, particularly if they can sign a replacement early in the window.
PREMIER LEAGUE・7 DAYS AGO
The Independent

In the days since the 2-0 defeat to Arsenal, Eddie Howe has been attempting to shift Newcastle United’s approach to something much less defensive – but the big question is how far to go.His side badly need a win against Norwich City to revitalise their season, but also know that another loss could prove fatal.It is one of many balancing acts that this Newcastle team have to strike right now, between the medium term and the short term. Howe wants to introduce the side to a completely new approach, but knows he just doesn’t have the time such processes...
PREMIER LEAGUE・9 DAYS AGO