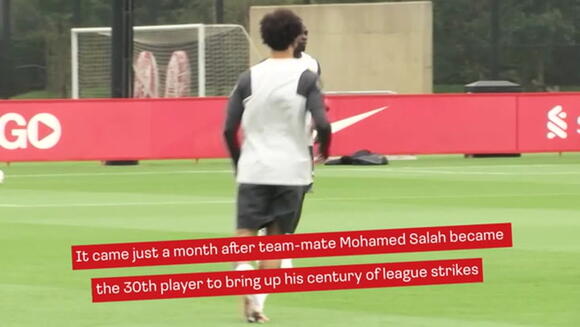 Liverpool are looking to continue their momentum when they travel to Atletico Madrid for a tricky Champions League tie on Tuesday evening.

Jurgen Klopp’s side have been in tremendous form so far this season, with Mohamed Salah’s performances bolstering his claim to being the world’s best player at present.

It was the Egyptian’s magical solo goal that stole the show in a 5-0 thrashing of Watford that saw the Reds maintain their unbeaten start in the Premier League.

Liverpool sit two points clear at the top of Group B after an emphatic victory over Porto but know they cannot afford to slip up, with AC Milan also pushing for a place in the knockout stages.

As Liverpool have already qualified for the knockout stages of the Champions League as winners of Group B, it is fair to expect a good deal of rotation from manager Jurgen Klopp when they take on Porto on Wednesday. Neco Williams, Andy Robertson, Jordan Henderson, James Milner and Divock Origi...
UEFA・8 DAYS AGO
BBC

Liverpool boss Jurgen Klopp has been forced into two changes from the 3-2 defeat by West Ham a fortnight ago for the teatime visit of Arsenal to Anfield after two of his players suffered injuries on international duty. Skipper Jordan Henderson is fit enough to make the bench but is...
PREMIER LEAGUE・12 DAYS AGO
firstsportz.com

Wanda Metropolitano witnessed a thrilling encounter between Atletico Madrid and AC Milan. The two giants of the football World did put up a great fight in their quest to clinch those three points, however, only one emerged victorious. The first half was a pretty decent one with neither of the...
UEFA・7 DAYS AGO
CBS Sports

The Champions League continues Wednesday on Paramount+. We're heading into Matchday 5 of the Champions League group stage, and AC Milan will be playing Atletico Madrid at 3 p.m. ET Wednesday, Nov. 24 at Estadio Wanda Metropolitano. AC Milan tied Porto 1-1 in their previous leg to earn one point. Atletico Madrid is coming off of a 2-0 defeat to Liverpool. Right now, AC Milan (one point) is last in Group B, while Atletico Madrid (four points) is in third place in the group. Recall that only the top two teams in the group will advance to the knockout phase. The teams both need a win to help get themselves out of the bottom half of the group. Keep up with this and all the UEFA Champions League action on CBSSports.com.
UEFA・8 DAYS AGO

Liverpool vs Porto: Player ratings as Reds keep up 100 per cent record in Champions League

Liverpool won a fifth straight Champions League group stage game as they saw off Porto 2-0 on Wednesday night.Otavio had the first big chance of the night but sent an effort wide of what was effectively an open goal.Sadio Mane thought he had put the Reds ahead before the break when he ran through from Thiago’s pass and side-footed in, but a VAR check ruled it offside. Nothing stopped Thiago himself celebrating soon after the restart though, with a fantastic half-volley from distance finding the bottom corner.Takumi Minamino also saw a strike ruled out for offside, before Mohamed Salah made...
PREMIER LEAGUE・7 DAYS AGO
LFCTransferRoom

The Champions League is down the last two matches and things are heating up as teams have a lot to play. Who will make the round 16? Who will drop into the Europa League?. The two money powerhouses collide once again with Manchester City holding the advantage. A win for...
UEFA・8 DAYS AGO
LFCTransferRoom

AC Milan travel to the Wanda Metropolitano to face Atletico Madrid knowing that they must win to keep alive their slim hopes of reaching the Champions League knockout stages. They have taken just one point in the first four games with Liverpool already confirmed as group winners. Milan come in...
UEFA・8 DAYS AGO
goal.com

That's all from us this evening after yet another thrilling night in the Champions League. Liverpool boss Jurgen Klopp to BT Sport: "It was good, we could have done better and been more calm in the first half but we were a bit hectic. That is not unusual when you put a team out that has not played together a lot. Some people think we might play an easy game but we were not here for that, Anfield is sold out so we want to go [for it].
PREMIER LEAGUE・8 DAYS AGO

The pressure is off for Liverpool tonight as they host FC Porto in the Champions League, but it’s still all to play for as far as the visitors are concerned. The Reds won each of their first four group stage games to seal top spot and qualification to the last 16, while the Portuguese side sit in second with two games to play - just one point ahead of Atletico Madrid.While some supporters would perhaps like to see the Reds rotate to an extent and preserve the first-choice stars who will have an inevitably busy run over the December...
PREMIER LEAGUE・7 DAYS AGO
CBS Sports

With Liverpool already through to the next round, Porto should have every chance to come away with a result to secure some points Wednesday on Paramount+. Liverpool have been perfect through Champions League play but with qualification secured and players in need of rest, they could spring a few surprises in their lineup. Liverpool won their last match 5-1 but this one should be a little closer. Porto have yet to defeat Liverpool in Champions League play so they will hope for rotation otherwise they'll need to defeat Atletico Madrid on the final day to secure their ticket to the round of 16.
PREMIER LEAGUE・8 DAYS AGO
The Independent

When Thomas Tuchel comes in after games and scans the other results, he doesn’t automatically go to Liverpool or Manchester City. At least not yet.“There are some teams behind us who show consistency, who show quality, who show determination,” the Chelsea manager said last week. “This is what it is. You have a right to be proud of your competition here, in the Premier League, and for us it feels good because we are in the middle of that race and we want to stay here. I don’t know if it will settle down.”There is a bit of a...
PREMIER LEAGUE・1 DAY AGO
SkySports

Team news, stats and prediction ahead of Liverpool vs Southampton in the Premier League on Saturday; kick-off 3pm. Andy Robertson could return to the Liverpool starting line-up when Southampton travel to Anfield on Saturday. Robertson has been sidelined with a minor hamstring strain but made a late substitute appearance against...
PREMIER LEAGUE・6 DAYS AGO

Atletico Madrid up to second with win in Cadiz

Atletico Madrid turned around a poor first-half performance to score four goals after the break and earn a 4-1 win at Cadiz on Sunday that put them second in the LaLiga standings. Thomas Lemar, Antoine Griezmann, Angel Correa and Matheus Cunha were all on target as Atletico won when scoring...
MLS・3 DAYS AGO
The Independent

Real Madrid host Sevilla this evening, with the visitors looking to keep pace with their rivals at the top of the La Liga table.Real entered the gameweek atop the standings on 30 points, with Sevilla third on 28, and Carlo Ancelotti’s men are unbeaten in their last eight fixtures.Sevilla, though, are undefeated in their last nine matches, so will also enter this game high on confidence.Julen Lopetegui’s players were 2-0 winners against Wolfsburg in the Champions League group stage on Tuesday, keeping alive their chances of reaching the knockout rounds, a night before Real thrashed Sheriff Tiraspol 3-0 in...
SOCCER・3 DAYS AGO
The Guardian

Clockwatch: Chelsea, Man City and Liverpool all won to keep the pressure on each other at the top of the table, while Everton fans are increasingly mutinous
PREMIER LEAGUE・20 HOURS AGO
The Independent

Liverpool are hoping to compound Everton’s misery when they travel to Goodison Park for the Merseyside derby this evening. Jurgen Klopp’s side are on a terrific run of form, having beaten Arsenal and Porto before thrashing Southampton last weekend all in the space of eight days. FOLLOW LIVE: Everton vs Liverpool – latest updatesLiverpool came into the midweek round of fixtures just two points adrift of leaders Chelsea and have already scored 39 goals in 13 Premier League games this season. However, for Everton, fortunes are far bleaker. Rafael Benitez is under increasing pressure after the Toffees limped to a...
PREMIER LEAGUE・23 HOURS AGO
LFCTransferRoom

Liverpool face former manager Rafael Benitez's Everton on Wednesday evening in the Premier League and LFC Transfer Room can now bring you the confirmed line ups. The match will be played at Goodison Park and the game will kick-off at 20:15GMT. Liverpool manager Jurgen Klopp knows his team need to...
PREMIER LEAGUE・23 HOURS AGO
The Independent

Liverpool manager Jurgen Klopp praised his side’s “mindset” after their record-breaking win over Everton at Goodison Park on Wednesday (1 December). The Reds ran out 4-1 winners over their bitter rivals thanks to two goals from Mo Salah and a goal apiece from Jordan Henderson and Diogo Jota. However, Klopp...
PREMIER LEAGUE・8 HOURS AGO
The Independent

Liverpool manager Jurgen Klopp believes their resounding Merseyside derby victory over Everton at Goodison Park has set a benchmark for the rest of the season.His side went to Old Trafford and hammered Manchester United 5-0 in October but Klopp was more impressed with the way his players handled the occasion of a feisty encounter against their near-neighbours to walk away with a 4-1 win.Not only was it their biggest victory at Goodison Park in 39 years it was just Klopp’s second success at the home of their rivals.And after the emotion of last season, when Virgil Van Dijk’s campaign was...
PREMIER LEAGUE・9 HOURS AGO
San Diego Union-Tribune