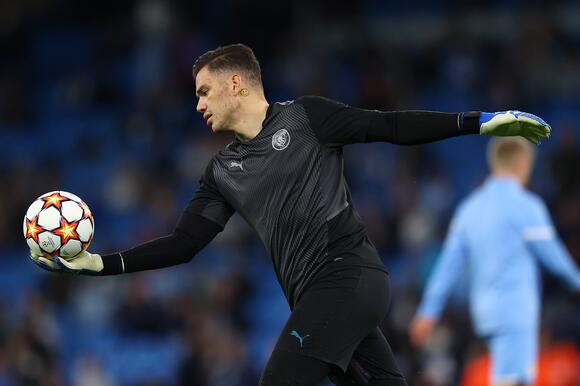 Manchester City are set to be boosted by the return of goalkeeper Ederson and forward Gabriel Jesus as they travel to Club Brugge in the Champions League tonight.

Both players were unavailable for Saturday’s win over Burnley following their involvement for Brazil in World Cup qualifying as they had flown directly to Belgium for the match.

City will be wary of another Club Brugge upset after the Belgian champions defied the odds to take four points from their opening two matches against Paris Saint-Germain and RB Leipzig in Group A.

Pep Guardiola’s side were beaten by PSG last time out and sit third in the standings with three points, following their opening win over RB Leipzig last month.

Here’s all the information you need before the match tonight.

When is Club Brugge vs Manchester City?

The match will kick off at 5:45pm BST on Tuesday 19 October.

It will be shown live on BT Sport 2, with coverage starting from 5pm. Subscribers can also stream the match live on the BT Sport website and mobile app.

Ederson and Gabriel Jesus could return for City after missing Saturday’s win against Burnley due to their involvement with Brazil during the international break.

After playing in Brazil’s match against Uruguay last Thursday, the pair flew straight to Belgium to avoid quarantining in the UK and Guardiola has suggested that they could play.

Jack Grealish, Ruben Dias and Kyle Walker could all return to the line-up after starting Saturday’s match against Burnley on the bench, which could see Raheem Sterling and John Stones drop out.

Ilkay Gundogan and Oleksandr Zinchenko have returned from injuries but Ferran Torres has been ruled out for the rest of the year with a broken foot.

Manchester City will be treating Club Brugge seriously as the Belgian side have upset the odds so far in the Champions League, but Pep Guardiola’s team remain heavy favourites and will be confident of picking up three points. Club Brugge 0-2 Manchester City

The Latest on Kevin De Bruyne, Jack Grealish, Dominic Calvert-Lewin and the Complete Team News Ahead of Man City vs Everton (Premier League)

City, who moved to second in the Premier League table following a 2-0 win over Manchester United earlier this month, face an Everton side who are winless in their last five matches. Pep Guardiola's side are just three points off the top of the table, while the Toffees come into...
PREMIER LEAGUE・12 DAYS AGO
The Independent

Manchester City host Everton this weekend with the two teams in contrasting form before the international break.Pep Guardiola’s team are second in the Premier League table after their all-too-comfortable win in the local derby against United, while the Toffees are down in 11th after going five without a win.Both sides are without a number of players to injuries, suspensions and other absences, but the expectation will be on City’s greater squad depth to still see them earn a positive result.LIVE: Follow live coverage of Man City vs EvertonRafael Benitez’s team have only won once away from home in the league this...
PREMIER LEAGUE・11 DAYS AGO
90min.com

Manchester City could seal top spot in Group A as they welcome PSG to the Etihad Stadium in the Champions League group stage. Pep Guardiola's side have recovered from their defeat to the Parisiens in the reverse fixture in September to put themselves in poll position to progress to the knockout stages, recording back-to-back victories over Club Brugge in the interim.
PREMIER LEAGUE・10 DAYS AGO
Yardbarker

The Ligue 1 giants are expected to make the trip to the North-West of England on Tuesday afternoon, ahead of a decisive match at the top of Champions League Group A on Wednesday night. Manchester City will secure a place in the knock-out stage of Europe's premier competition once again,...
PREMIER LEAGUE・10 DAYS AGO

The Sky Blues will be seeking revenge against the Parisiens after suffering a 2-0 loss at the hands of Lionel Messi and Co on matchday two of the Champions League group-stage in September. City will be looking to make it four wins out of four so far in November against...
PREMIER LEAGUE・9 DAYS AGO
The Independent

Is Man City vs PSG on TV tonight? Kick-off time, channel and how to watch Champions League fixture

Man City are taking on PSG in a match which could decide who wins Champions League group A.City have three wins from their four games so far, with their only defeat coming at the hands of Lionel Messi in Paris. If Leipzig beat Brugge away in the other game, City and PSG advance whatever the result in their game at Etihad Stadium. City would guarantee topping the group with a victory and will be looking to make a statement after losing in Paris in the return fixture, which marked Messi’s first goal for PSG.Follow Man City vs PSG LIVE!PSG’s build-up...
PREMIER LEAGUE・8 DAYS AGO
CityXtra

The Blues moved three points clear of David Moyes' highflying Hammers side with a 3-0 win over Everton on Sunday afternoon, as goals from Raheem Sterling, Rodri and Bernardo Silva secured an eighth league win of the season. West Ham's fine winning run came to an abrupt end against Wolves...
PREMIER LEAGUE・10 DAYS AGO

Manchester City hit back in the final half an hour to beat Paris Saint-Germain 2-1 and seal top spot in Group A of the Champions League. Goals by Raheem Sterling and Gabriel Jesus were no more than City deserved after dominating for much of the game without reward, denied time after time by PSG’s last-ditch defending. Kylian Mbappe’s goal on the break gave PSG the lead early in the second half, but they could not hold on.Here’s how every player rated. Manchester CityEderson, 5: Had very little to do, but will think he could have done better with Mbappe’s goal...
PREMIER LEAGUE・8 DAYS AGO
CityXtra

Pep Guardiola's side are within touching distance of the knock-out stage of Europe's premier club competition once again, and have the opportunity to secure their place and top spot in Group A with a victory against the Paris outfit. The clash at the Etihad Stadium will also present Manchester City...
PREMIER LEAGUE・9 DAYS AGO
The Independent

Gabriel Jesus completed Manchester City’s comeback to beat Paris Saint-Germain 2-1 and secure a place in the round of 16 of the Champions League as group winners on Wednesday.PSG is also sure of going through as runner-up in Group A thanks to Leipzig beating Club Brugge 5-0.The clash of the competition’s wealthiest teams, who are yet to win European football’s top prize, fully came to life in the 50th minute when Kylian Mbappe put PSG ahead after an interchange between Lionel Messi and Neymar.But the attacking dominance by City that defined the first half saw Raheem Sterling’s outstretched left...
PREMIER LEAGUE・8 DAYS AGO
The Independent

Manchester City host West Ham today in a Premier League top-four battle at the Etihad Stadium.Pep Guardiola's side come into the game full of confidence following back-to-back wins in the Premier League before victory over PSG in the Champions League in midweek. City came into the weekend second in the table behind leaders Chelsea, and can ill-afford a slip-up now. FOLLOW LIVE Man City vs West Ham build-up, team news, score and goal updatesThe Hammers had been flying with four wins on the bounce until last weekend's surprise defeat at Wolves, and David Moyes knows it will be a tough...
PREMIER LEAGUE・4 DAYS AGO

David Moyes: Brighton are really lucky to have Graham Potter as manager

West Ham boss David Moyes feels Brighton fans should count themselves “really lucky” to have Graham Potter in charge.Following Saturday’s goalless draw with Leeds at the Amex Stadium there was booing from some of the home support as the Seagulls saw their winless run in the Premier League extended to eight matches.Boss Potter was left “a little bit perplexed” by the negative reaction, later suggesting those fans who did vent their frustrations could have found themselves somewhat caught up in the moment.Brighton head to the London Stadium on Wednesday night sitting ninth in the table.Moyes believes Potter deserves full...
UEFA・2 DAYS AGO
San Diego Union-Tribune

Burnley keeps up good record vs. Wolves with 0-0 draw in EPL

Burnley maintained its impressive record against Wolverhampton by securing a 0-0 draw in the Premier League to make it six matches unbeaten against its opponent
SAN DIEGO, CA・1 DAY AGO
The Independent

Bernardo Silva’s exquisite volley inspired Manchester City to a battling 2-1 win at Aston Villa.The forward’s brilliant strike proved the difference as City were made to fight for a fourth straight Premier League win.Silva’s first-half screamer added to Ruben Dias’ opener had the champions in cruise control before Ollie Watkins’ goal after the break made life uncomfortable.Jack Grealish was a late substitute on his first return to Villa Park since his £100million summer move to the Etihad to earn a mixed reception.Chelsea’s 2-1 win at Watford made victory imperative for City and they sit a point behind the leaders in...
PREMIER LEAGUE・1 DAY AGO
The Independent

When Thomas Tuchel comes in after games and scans the other results, he doesn’t automatically go to Liverpool or Manchester City. At least not yet.“There are some teams behind us who show consistency, who show quality, who show determination,” the Chelsea manager said last week. “This is what it is. You have a right to be proud of your competition here, in the Premier League, and for us it feels good because we are in the middle of that race and we want to stay here. I don’t know if it will settle down.”There is a bit of a...
PREMIER LEAGUE・1 DAY AGO
The Guardian

Clockwatch: Chelsea, Man City and Liverpool all won to keep the pressure on each other at the top of the table, while Everton fans are increasingly mutinous
PREMIER LEAGUE・1 DAY AGO
The Independent

John Sillett, fondly known as ‘Snoz’ throughout the world of football because of his large nose, will forever be remembered for leading Coventry to FA Cup glory in 1987.The nickname suited the larger than life Sillett as he certainly had a nose for drama during a career that began at Chelsea and reached its zenith when the unfancied Sky Blues won the cup by beating Tottenham 3-2 in thrilling fashion at Wembley.It remains the only major honour in Coventry’s 138-year history.Sillett, who has died at the age of 85, said his great pal and former Chelsea team-mate Jimmy Greaves coined...
PREMIER LEAGUE・2 DAYS AGO
NBC Sports

Leicester vs Watford: The Foxes need a win at the King Power Stadium on Sunday (Watch live at 9 am ET, on Peacock Premium), or they’ll find themselves below the Hornets in the Premier League table. There’s no two about it, Leicester’s start to the season has been abysmal given...
PREMIER LEAGUE・6 DAYS AGO
Yardbarker

Juventus are set to take on Chelsea on Tuesday evening with the chance to seal top spot in our group. The Old Lady have had a number of injury issues this term, and that doesn’t appear to be changing much any time soon. Danilo is the latest player to be...
SOCCER・10 DAYS AGO