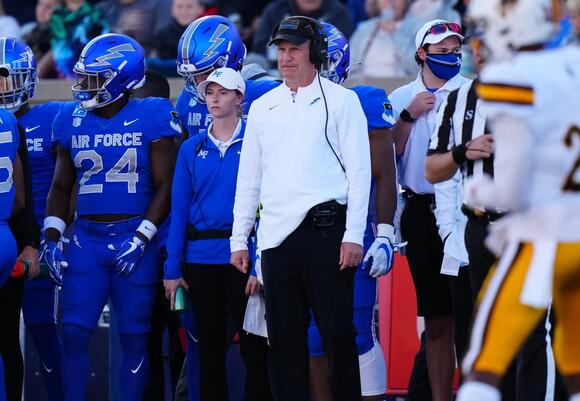 Check out odds, insights and more in our betting preview for the Air Force Falcons vs. San Diego State Aztecs college football matchup on October 23, 2021.

A pair of the nation's most prolific running games meet when the Air Force Falcons (6-1, 0-0 MWC) bring college football's first-ranked rushing offense into a matchup with the No. 22 San Diego State Aztecs (6-0, 0-0 MWC), who have the No. 20 rushing offense, on Saturday, October 23, 2021. The Falcons are 3.5-point favorites. The total for this matchup has been set at 40 points.

It has been a rough two weeks for the Falcons, as they have scored just three points total in their two losses. Atlanta had won three of four before it ran into the Cowboys and Patriots in back-to-back weeks that resulted in two blowout losses. How to Watch Atlanta Falcons...
NFL・2 DAYS AGO
Sports Illustrated

Check out odds, plays and more for the Tampa Bay Buccaneers vs. Atlanta Falcons NFL Week 13 matchup on December 5, 2021.
NFL・1 HOUR AGO
Sportsnaut

Can the Tampa Bay Buccaneers win back-to-back Super Bowls? Find out how the 2021 schedule sets up nicely for Tom Brady and Co. to make another title run.
NFL・1 DAY AGO
Sportsnaut

Atlanta Falcons schedule: Looking to get back in playoff race against Buccaneers

COLUMBUS — Backup Ohio State quarterback Jack Miller has been suspended from the football team following an arrest on suspicion of OVI Friday morning in Columbus, according to our news partners at WBNS-TV. >>Victim identified in deadly crash involving ex-Raider Henry Ruggs in Las Vegas. State troopers confirmed to the...
OHIO STATE・24 DAYS AGO

Report: LSU has made massive offer to top head coach

LSU is expected to pursue several big names for its head coaching vacancy, and one report claims they have already made a mammoth offer to one of the top coaches in the nation. Jake Crain, a former college football coach who used to work for Rivals.com, said on his “The...
NFL・12 DAYS AGO
Larry Brown Sports

The Ohio State Buckeyes appear to be hitting their stride at the right time, and coach Ryan Day wants his biggest rival to know it. The Buckeyes throttled the Michigan State Spartans 56-7 on Saturday, turning a clash of top ten teams into an uncompetitive blowout. Ohio State jumped out to a 49-0 lead before halftime, and quarterback C.J. Stroud asserted his Heisman Trophy credentials by throwing for 432 yards and six touchdowns.
MICHIGAN STATE・9 DAYS AGO
Sports Illustrated

Report: Brian Kelly Will Return to Notre Dame Next Season Despite Speculation

It's late in the college football season, which means that there are plenty of rumors regarding whether Notre Dame head coach Brian Kelly will be sticking around in South Bend next year. It looks like he'll be giving it another go. Dennis Dodd of CBS Sports reports that Kelly will...
NOTRE DAME, IN・10 DAYS AGO
The Spun

An anonymous Oklahoma Sooners football player has a telling admission on the news of Lincoln Riley leaving for USC. Sunday afternoon, Riley shocked the college football world, when he agreed to leave Oklahoma for Southern California. “My time at OU has included some of the most special years of my...
OKLAHOMA STATE・1 DAY AGO

The Heisman race will likely go down to conference championship weekend and which player shines the brightest in that moment.
COLLEGE SPORTS・13 DAYS AGO
The Spun

Cowboys Announce Who Will Take Over As Head Coach

Mike McCarthy will not be on the sidelines for the Dallas Cowboys when they take on the New Orleans Saints this Thursday. But somebody has to step in and run the team in his absence. Speaking to the media on Monday, McCarthy announced that defensive coordinator Dan Quinn will serve...
NFL・19 HOURS AGO
AllSooners

Luke Fickell is having an outstanding season at Cincinnati that could culminate with a trip to the College Football Playoff. In the meantime, the head coach has been mentioned as a potential candidate for some much bigger jobs than the one he has with the Bearcats. He may be interested in at least one of them.
CINCINNATI, OH・6 DAYS AGO

Before every episode of “College GameDay,” ESPN’s Kirk Herbstreit interviews Lee Corso to discuss the current landscape of college football and what’s in store for that given weekend. During this Saturday’s mini interview, Corso revealed that he’s predicting one of the top-five teams in the country to lose this afternoon.
COLLEGE SPORTS・24 DAYS AGO
Larry Brown Sports

TCU on Sunday surprisingly parted ways with Gary Patterson as head coach even though he had been extremely successful at the school. Though the Horned Frogs were 3-5 this season, Patterson’s firing was surprising; few saw it coming. Maybe TCU was concerned with the trajectory of the football program the...
COLLEGE SPORTS・28 DAYS AGO
The Big Lead

Notre Dame is looking for a new head football coach after Brian Kelly shocked the sports world by bolting to take the LSU job. Coaching the Fighting Irish is a marquee job and Notre Dame should have no trouble finding an excellent replacement. What follows are five candidates to replace Kelly as the school's head coach.
COLLEGE SPORTS・13 HOURS AGO
247Sports

In a battle of unbeaten teams, the Michigan State Spartans defeated the Michigan Wolverines by a score of 37-33 Saturday. Heisman Trophy candidate Kenneth Walker rushed the ball 23 times for 197 yards and five touchdowns for the Spartans in the win. During an appearance on ESPN’s SportsCenter Sunday, college...
MICHIGAN STATE・29 DAYS AGO