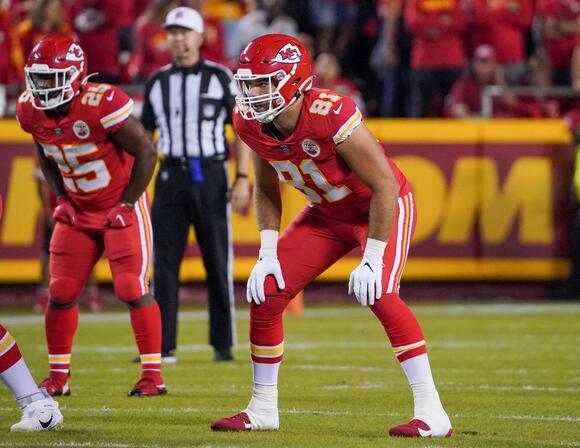 Check out odds, plays and more for the Kansas City Chiefs vs. Tennessee Titans NFL Week 7 matchup on October 24, 2021.

Odds for Chiefs vs. Titans

Kansas City Chiefs quarterback Patrick Mahomes has impressed NFL fans, media members and opponents with an array of on-the-money deep balls, no-look passes and left-handed throws since entering the league. So much so, that anytime Mahomes throws an interception or makes a bad play, the NFL world is forced to remember that he is still mortal.
NFL・15 DAYS AGO
myq105.com

We were hoping Gronk and Brown would return soon, but that doesn’t look like it’s happening right now. Rob Gronkowski’s injuries from earlier this season seem to be bad enough that the Buccaneers have signed , a tight end, to the practice squad. Fells is a former basketball player-turned football player, at 6’7′ tall.
NFL・24 DAYS AGO
The Tennessean

Since Derrick Henry’s injury, the Tennessee Titans have leaned on a committee approach in the backfield.  Adrian Peterson believes it’s “getting to that point” where things could change. “I think this week will be a good week to see how things unfold with that,” Peterson said Friday. ...
NFL・15 DAYS AGO
CBS Sports

December is here, a time for celebration and feeling good, so let's get the picks back on track. Make it a December to remember. Wait, I've heard that before. Anyway, the picks weren't great last week. I went 7-8 against the spread, 9-6 straight up and 3-3 with my Best Bets as part of the Pick Six Podcast.
NFL・3 DAYS AGO

Discover player props odds, plays, and insights for Travis Kelce in his Week 13 contest with the Kansas City Chiefs against the Denver Broncos.
NFL・11 HOURS AGO
sportsgamblingpodcast.com

The Kansas City Chiefs (7-4) are favored by 9.5 points as they attempt to keep their four-game winning streak going in a matchup against the Denver Broncos (6-5) on Sunday, December 5, 2021 at GEHA Field at Arrowhead Stadium. An over/under of 47.5 is set for the game. Chiefs vs....
NFL・1 DAY AGO
USA TODAY

What will be the NFL's next great quarterback rivalry?

The NFL has a horde of talented young passers, but it's still to be determined if another Tom Brady-Peyton Manning rivalry will emerge.
NFL・1 DAY AGO

Super Bowl 2022: The Tampa Bay Buccaneers are the reigning NFL champions, but who'll make the playoffs — and lift the Lombardi Trophy at the end of this season?
NFL・1 DAY AGO
Sportsnaut

Check-in here throughout the year for the NFL games today full weekly schedule. Including links to Sportsnaut’s season forecasts for
NFL・2 HOURS AGO
featureweekly.com

The Dallas Cowboys will be missing wide receiver Amari Cooper for at least two of their three games in a 12-day span, beginning Sunday against the Kansas City Chiefs. Cooper was placed on the reserve/COVID-19 list on Friday. Cooper tested positive for COVID-19 and is unvaccinated, according to ESPN, which...
NFL・14 DAYS AGO
thecomeback.com

On Friday, as soon as Aaron Rodgers started saying all kinds of scientifically inaccurate things about vaccines and how he was trusting medical advice from podcaster Joe Rogan over scientists, you knew it was only a matter of time before some of his sponsorship deals started drying up. The big...
NFL・28 DAYS AGO

A Dallas Cowboys player’s wife took to Twitter on Tuesday afternoon to announce her husband’s injury diagnosis. Kate Urban, the wife of Cowboys defensive lineman Brent Urban, announced on Tuesday that Brent is out for the season. The Cowboys defensive player underwent season-ending tricep surgery. He’ll continue to be involved...
NFL・4 DAYS AGO
AOL Corp

Mac Jones was trying to hurt an opponent. That's the only takeaway one can have after watching replays of him twisting Brian Burns' ankle on Sunday in the New England Patriots' 24-6 victory against the Carolina Panthers. And any player who intentionally tries to hurt an opponent, especially with something...
NFL・26 DAYS AGO
The Spun

With Aaron Rodgers officially back, the Green Bay Packers did some backup quarterback shuffling on Monday afternoon. The Packers activated Kurt Benkert from the practice squad Reserve/COVID-19 list and released former No. 3 overall pick Blake Bortles. Green Bay originally brought Bortles into the fold earlier this month after Rodgers and Benkert tested positive for COVID-19.
NFL・19 DAYS AGO
CowboyMaven

FRISCO In more ways than one, Dak Prescott captained his Dallas Cowboys to Sunday’s 43-3 rout of the Atlanta Falcons. Michael Irvin would like his pal Dak to captain his Cowboys in one less way. “We don’t need that TD that bad bro!! @dak don’t do that s-t again!!!! WE...
NFL・19 DAYS AGO
FanSided

The Baltimore Ravens were without quarterback Lamar Jackson in practice on both Wednesday and Thursday as the former MVP sat out due to a non-COVID-19 illness. This marked the third time this season that Jackson had missed practice time due to an illness. Although it certainly didn’t hurt his team the previous two times as the Ravens went on to win both games.
NFL・14 DAYS AGO
The Spun

Buccaneers quarterback Tom Brady has beaten every team in the NFL throughout his career but there’s one team that he loves to win against more than any other. It should come as no one’s surprise that it’s the New York Giants. Brady lost to New York twice in the Super Bowl while he was with New England, one of which came in 2008 when his team was vying for a perfect season.
NFL・12 DAYS AGO
The Spun

Packers Are Feared To Have Suffered Major Injury Loss

The Green Bay Packers are in a tight one against the Minnesota Vikings on Sunday afternoon. Regardless of the end result, though, the NFC North franchise is feared to have suffered a major loss on Sunday. According to NFL Network insider Ian Rapoport, the Packers fear that standout offensive lineman...
NFL・13 DAYS AGO
The Spun

Aaron Rodgers’ estranged father has weighed in on the situation involving the Green Bay Packers star quarterback. The Packers quarterback made his return to the field on Sunday, after missing a game due to a positive COVID-19 test. Rodgers, who previously told the media that he had been “immunized,” was actually not vaccinated.
NFL・20 DAYS AGO