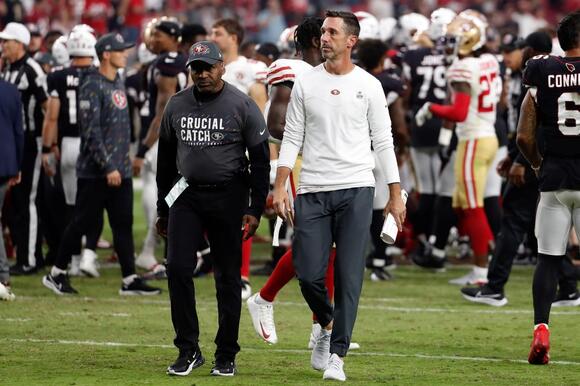 Check out odds, plays and more for the San Francisco 49ers vs. Indianapolis Colts NFL Week 7 matchup on October 24, 2021.

The San Francisco 49ers (2-3) are 3.5-point favorites as they look to end their three-game losing streak in a matchup against the Indianapolis Colts (2-4) on Sunday, October 24, 2021 at Levi's Stadium. The over/under is 44 in this game.

Odds for 49ers vs. Colts

Super Bowl 2022: The Tampa Bay Buccaneers are the reigning NFL champions, but who'll make the playoffs — and lift the Lombardi Trophy at the end of this season?
NFL・15 HOURS AGO
FOX59

INDIANAPOLIS – It was less than 2 minutes of Wednesday’s Episode 3 of HBO’s “Hard Knocks,’’ but it was impossible to ignore. There was Frank Reich on the sidelines, arms crossed. His Indianapolis Colts had just suffered a fourth turnover – Nyheim Hines’ muffed punt – and Tom Brady was back in business early in […]
NFL・1 DAY AGO
Sports Illustrated

Discover player props odds, plays, and insights for Carson Wentz in his Week 13 contest with the Indianapolis Colts against the Houston Texans.
NFL・9 HOURS AGO
Sports Illustrated

Frogs in the NFL: Week 13 Action

16 TCU Horned Frogs are on NFL rosters as of Week 13, with nine of them making significant contributions to their teams. Here is where you can see each of your Pro Frogs this coming week, along with last week’s performances. Note: Jason Verrett (49ers), Marcus Cannon (Texans), and Sewo...
NFL・6 HOURS AGO

Check-in here throughout the year for the NFL games today full weekly schedule. Including links to Sportsnaut’s season forecasts for
NFL・1 DAY AGO
Sportsnaut

Bucs Have Made An Official Decision On Richard Sherman

Over the weekend, the Tampa Bay Buccaneers found themselves in an unfamiliar spot – losing. Heading into the weekend at 6-2, the Buccaneers were expected to easily dispatch the Washington Football Team. However, like last year’s playoff matchup between the two teams, Washington proved to be a tough out. Taylor...
NFL・16 DAYS AGO
thecomeback.com

On Friday, as soon as Aaron Rodgers started saying all kinds of scientifically inaccurate things about vaccines and how he was trusting medical advice from podcaster Joe Rogan over scientists, you knew it was only a matter of time before some of his sponsorship deals started drying up. The big...
NFL・27 DAYS AGO

The Dallas Cowboys will be missing wide receiver Amari Cooper for at least two of their three games in a 12-day span, beginning Sunday against the Kansas City Chiefs. Cooper was placed on the reserve/COVID-19 list on Friday. Cooper tested positive for COVID-19 and is unvaccinated, according to ESPN, which...
NFL・13 DAYS AGO
The Spun

With Aaron Rodgers officially back, the Green Bay Packers did some backup quarterback shuffling on Monday afternoon. The Packers activated Kurt Benkert from the practice squad Reserve/COVID-19 list and released former No. 3 overall pick Blake Bortles. Green Bay originally brought Bortles into the fold earlier this month after Rodgers and Benkert tested positive for COVID-19.
NFL・18 DAYS AGO
myq105.com

We were hoping Gronk and Brown would return soon, but that doesn’t look like it’s happening right now. Rob Gronkowski’s injuries from earlier this season seem to be bad enough that the Buccaneers have signed , a tight end, to the practice squad. Fells is a former basketball player-turned football player, at 6’7′ tall.
NFL・23 DAYS AGO
The Baltimore Sun

There was a time when the Ravens would have celebrated holding Le’Veon Bell to 48 yards on 11 carries. Not so long ago, he lived in their nightmares — those outside runs on which he’d wait and wait, then snap off a double-digit gain, or the pass routes on which he’d toy with some poor linebacker. As an All-Pro for the Pittsburgh Steelers, he played a starring role in some of the most painful ...
NFL・23 DAYS AGO

With Kyler Murray still nursing an ankle injury, the Arizona Cardinals are reportedly adding another quarterback to their active roster. According to ESPN’s Adam Schefter, Arizona is signing Trace McSorley off the Baltimore Ravens’ practice squad. McSorley joins Murray, Colt McCoy and Chris Streveler as quarterbacks on the Cardinals’ roster.
NFL・11 DAYS AGO
CBS Sports

Hall of Famer Scottie Pippen has thrown shade at his longtime Chicago Bulls teammate Michael Jordan, widely considered the greatest basketball player of all time, since the 2020 debut of the Jordan-centric docuseries "The Last Dance." Now, Pippen is directing his criticism toward the player widely known as football's greatest of all time.
NFL・14 DAYS AGO
The Spun

The Miami Dolphins announced a plethora of moves this Wednesday involving both their 53-man roster and practice squad. For starters, the Dolphins signed cornerback Jamal Perry to their active roster. He has been elevated from the practice squad three times this season, making two specials team tackles in those appearances.
NFL・16 DAYS AGO
The Spun

A Dallas Cowboys player’s wife took to Twitter on Tuesday afternoon to announce her husband’s injury diagnosis. Kate Urban, the wife of Cowboys defensive lineman Brent Urban, announced on Tuesday that Brent is out for the season. The Cowboys defensive player underwent season-ending tricep surgery. He’ll continue to be involved...
NFL・3 DAYS AGO
ClutchPoints

After a standout start in his return to the Carolina Panthers, quarterback Cam Newton had his fair share of struggles in his team’s Week 12 road loss to the Miami Dolphins. The Panthers offense once again faced stout difficulties in stringing together multiple touchdown drives over a game. Newton led the offense to a mere one touchdown drive, while the Panthers averaged a lowly 3.7 yards per play against the Dolphins. This led to Panthers head coach Matt Rhule opting to bench Newton over the second half in favor of backup quarter P.J. Walker.
NFL・5 DAYS AGO
96-5 The Fox

Minnesota Vikings coach Mike Zimmer is 65 years old. He's dating, however, a woman nearly half his age, and oh yeah, she's a Maxim cover model. According to an article in Brobible, she's Maxim cover model Katarina Miketin. Rumors began circulating back in October of 2020 the two were dating....
NFL・10 DAYS AGO
The Spun

The Tampa Bay Buccaneers are bringing a familiar face back into the building. According to a report, the Buccaneers have signed veteran wide receiver Breshad Perriman. He will reportedly start out on Tampa Bay’s practice squad. Perriman spent the 2019 season in Tampa Bay. He caught 36 passes for 645...
NFL・24 DAYS AGO