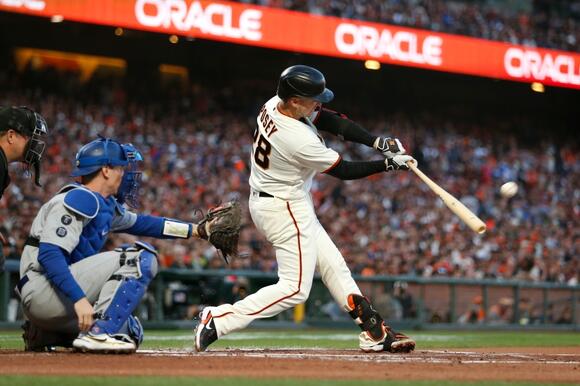 SAN FRANCISCO (AP) — The San Francisco Giants plan to exercise Buster Posey’s $22 million club option for the 2022 season as long as the veteran catcher wants to keep playing after a stellar year.

Posey, whose contract includes a $3 million buyout, helped lead the Giants to a franchise-record 107 wins and their first NL West title since 2012 by playing regularly down the stretch this year as he demonstrated his health and durability during his 12th major league season. The 34-year-old Posey opted out of the coronavirus-shortened 2020 campaign to care for prematurely born adopted twin girls.

“He is in our estimation the best catcher in baseball this year,” Farhan Zaidi, Giants president of baseball operations, said Monday. “… Obviously want to have conversations with Buster and continue to have internal conversations about that but having him on this team next year is a high priority.”

Posey caught five of the final six regular-season games and 10 of the last 13 as San Francisco clinched the division on the final day. He batted .304 with 18 homers and 56 RBIs, showing his surgically repaired right hip had finally regained full strength three years post-op.

Zaidi, manager Gabe Kapler and San Francisco are still dealing with the sting of a 2-1 loss to the rival Dodgers in the decisive Game 5 of the NL Division Series on Thursday night.

The Giants certainly missed first baseman Brandon Belt, who fractured his left thumb Sept. 26 at Colorado after being hit on the hand with a pitch while squaring to bunt. The 33-year-old Belt batted .274 with a career-high 29 homers and 59 RBIs.

He is someone else Zaidi is committed to keeping — while starting pitching also will be a top priority this offseason. A one-year qualifying offer to Belt might be considered as he wraps up a $72.8 million, five-year contract that took him from 2017 to 2021.

“You can talk about his value both in how he played down the stretch and how much we missed him when he went down. Really, really important part of this team,” Zaidi said. “The qualifying offer decision we’ll have to think more about and I’m sure we’ll have some conversations with his representation as we did during the year. He’s happy here, I think he feels really appreciated. And we appreciate him. He’s been one of the best hitters in baseball over the last couple of years. He’s a big part of this team and we’ll certainly hope that those are productive dialogues.”

Zaidi realizes retaining Kris Bryant might be a tough task after the Giants acquired him from the Cubs at the July trade deadline. Bryant gave Kapler so many options with his ability to play all three outfield spots and the infield.

“We recognize that he’s superstar talent and it’s going to be a really competitive market for his services,” Zaidi said. “I’m sure we’ll have conversations there but he’s going to have a long line of suitors so we’ll just have to see how that develops.”

San Francisco Giants legend Buster Posey has been named the NL Comeback Player of the Year. Posey is set to retire after playing for the Giants since 2009. After sitting out the 2020 season because of the COVID pandemic, Buster Posey hit .304 with 18 home runs. He helped lead the Giants to the NL West division winners.
MLB・4 DAYS AGO
giants365.com

Good morning, baseball fans! It was announced yesterday that the San Francisco Giants had one player winning a 2021 Silver Slugger, and I bet you already know who it was. That's right, our recently retired catcher/epitome of a Forever Giant, Buster Posey.
MLB・14 DAYS AGO
editorials24.com

The San Francisco Giants updated Team Outlook after picking up the mutual options on Wilmer Flores, Jose Alvarez, & Jay Jackson https://editorials24.com/outlooks/?league=mlb&team=2582. A Senior writer & Editor, James is a postgraduate in biotechnology and has an immense interest in following news developments. Quiet by nature, he is an avid Lacrosse...
MEDICAL & BIOTECH・10 DAYS AGO

Crawford has highest MVP finish by a Giant since Posey

The best player on baseball's best regular season team was not voted the National League Most Valuable Player, but Brandon Crawford did get more consideration than any Giant since 2012, when Buster Posey won the award. Crawford finished fourth in the voting, trailing winner Bryce Harper, Juan Soto and Fernando...
MLB・8 DAYS AGO
NBC Sports

Nobody was looking forward to saying goodbye to Buster Posey, especially his teammates. The longtime Giants catcher announced his retirement in a Nov. 4 press conference at Oracle Park, ending a decorated career that consisted of three World Series championships. Two of which, he won alongside shortstop Brandon Crawford, who...
MLB・3 DAYS AGO
Red Bluff Daily News

The Giants and their fans will miss Buster Posey terribly when the new season rolls around next spring. Brandon Crawford will miss him even more. Less than three weeks after Posey announced his retirement from baseball, Crawford penned a first-person tribute to his longtime teammate and friend, calling the star catcher “one of my best friends in the world.”
MLB・3 DAYS AGO
The Spun

Former Mets pitcher Pedro Feliciano reportedly passed away in his sleep on Sunday night. ESPN’s Eduardo Perez first had the news on his Twitter account on Monday morning. Feliciano was just 45 years old and was reportedly jet skiing on Sunday with his family. Feliciano played nine seasons in the...
MLB・18 DAYS AGO

Freddie Freeman has donned only a single uniform throughout his Major League Baseball career. And if the Atlanta Braves have their way, it’s the only uniform he’ll ever wear. But the path to that end may not come without come some hiccups. Freeman is currently a free agent and seeking...
MLB・13 DAYS AGO
Talking Chop

It’s no secret that the Braves need to re-sign Freddie Freeman. The only question is the cost. Freeman rejected the Braves’ initial offer of 5 years for $135 million. The free agent is seeking a deal closer to $200 million and a projected 6 years. Re-signing Freeman at that price...
MLB・12 DAYS AGO
News-Democrat

Two career-long St. Louis Cardinals with a combined 20 seasons in the big leagues officially cut ties with the team on Thursday morning, as the club officially declined its contract options on infielder Matt Carpenter and pitcher Carlos Martínez. Carpenter’s buyout will cost the club $2,000,000; Martínez’s will cost $500,000.
MLB・22 DAYS AGO
The Spun

The Yankees are sending an infielder to LA. On Monday, the team reported Tyler Wade has been traded to the Angels. “The New York Yankees today announced that they have traded INF/OF Tyler Wade to the Los Angeles Angels,” the team announced on social media. The trade is for a...
MLB・4 DAYS AGO

The Houston Astros will turn the ball over to starting pitcher Zack Greinke for Game 4 of the World Series against the Atlanta Braves. This will be the third appearance for Greinke in this postseason and just his second start, as he got the starting nod against the Boston Red Sox in Game 4 of the ALCS, where he allowed two earned runs in 1.1 innings pitched.
MLB・27 DAYS AGO
FanSided

The Detroit Tigers need a shortstop and more and more fans are hoping that free agent Carlos Correa can be convinced to come to the Motor City. According to reports, the Houston Astros have reportedly offered Correa a 5-year, $160 million deal, which is less than half of what Francisco Lindor.
MLB・20 DAYS AGO
The Spun

The Los Angeles Dodgers bolstered their pitching staff on Monday afternoon. According to MLB insider Ken Rosenthal, the Dodgers have signed free-agent left-hander Andrew Heaney. Heaney spent the first half of the 2021 season with the Angels before he was traded to the New York Yankees. He struggled with both...
MLB・18 DAYS AGO

Kris Bryant is finally an MLB free agent, one year later than he would have been if not for the
NFL・17 DAYS AGO
FanSided

These three members of the Houston Astros won’t return next season after losing the 2021 World Series. The Houston Astros made it to the World Series for the third time in five years after disposing of the Chicago White Sox and Boston Red Sox in the previous rounds of the postseason. But, they met their match against a red-hot, 88-win Atlanta Braves team.
MLB・24 DAYS AGO
fox40jackson.com

Trevor Bauer, the Los Angeles Dodgers pitcher accused of sexual assault, used the Kyle Rittenhouse acquittal to take a shot at “the media.”. “I guess it’s important to know all the facts before jumping to conclusions, huh? Apparently not everything written in the media is true,” Bauer tweeted. Kyle Rittenhouse...
MLB・6 DAYS AGO
FanSided

The Pittsburgh Pirates have signed former division rival Jose Quintana in free agency in the exact sort of low-risk move they were built for. Quintana hasn’t exactly put up All-Star numbers of late, as his last season with a sub-4 ERA was 2017. Still, beggars can’t be choosers, and the Pirates finished last place in the NL Central for a reason.
MLB・5 DAYS AGO