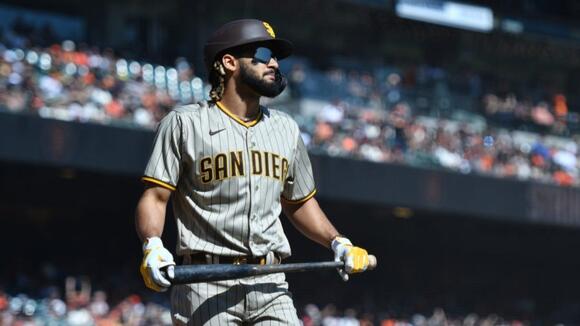 The answer may already be decided, according to a report Monday.

The Padres star shortstop is not planning to have surgery on the shoulder this offseason, the San Diego Union-Tribune reported , citing an unnamed source. Rumors swirled about the potential decision through the season, particularly after he landed on the injured list with a partially dislocated left shoulder after exiting a July 30 game against the Rockies.

They teased, they faded: Some moments to remember (and forget) from the Padres’ second half

Asked about the U-T’s report, a team spokesman told FOX 5 “a final decision has not been made yet.”

“Should know more in the next couple of days,” the spokesman said in an email.

Tatis told reporters this month that he’d hoped to avoid surgery on his shoulder. He was quoted by MLB.com saying he was weighing the opinions of medical professionals and those close to him before making the call.

“We’re just going to see what’s in front of us and just try to take the smart decision,” he told MLB.com.

In his third season for the Friars, Tatis led the National League with 42 home runs in addition to his .282 batting average, 97 RBIs and 25 stolen bases. He also made the NL All-Star team, becoming the first Padre in more than 20 years to be voted by fans to start the game.

Tatis, who turns 23 in January, is under contract with San Diego through the 2034 season.

The New York Yankee family was saddened to learn of the passing of ex-Yankee manager Bill Virdon. Virdon was manager of the Yankees during 1974 and 1975 before being replaced in 1975 my the new manager Billy Martin. In 1974 he won 89 games for the Yankees. However, Virdon’s claim...
MLB・8 DAYS AGO
The Spun

Former Mets pitcher Pedro Feliciano reportedly passed away in his sleep on Sunday night. ESPN’s Eduardo Perez first had the news on his Twitter account on Monday morning. Feliciano was just 45 years old and was reportedly jet skiing on Sunday with his family. Feliciano played nine seasons in the...
MLB・24 DAYS AGO
Tv20detroit.com

A former Boston Red Sox player who helped the team win a World Series title in 2007 has died. According to ESPN Deportes and Dominican newspaper Diario Libre, former shortstop Julio Lugo died of an apparent heart attack on Monday. Lugo's sister, Rina Lugo, told the sports outlet that her...
MLB・17 DAYS AGO
NESN

The New York Yankees seemingly have been tied to each free agent this offseason, but reportedly got one of their guys Monday. The Yankees signed former Boston Red Sox shortstop José Peraza to a minor league deal, according to Dan Martin of the New York Post. Peraza has bounced around...
MLB・3 DAYS AGO

Freddie Freeman has donned only a single uniform throughout his Major League Baseball career. And if the Atlanta Braves have their way, it’s the only uniform he’ll ever wear. But the path to that end may not come without come some hiccups. Freeman is currently a free agent and seeking...
MLB・20 DAYS AGO
Boston

One of MLB’s fastest players — if not the fastest — is coming to Boston. The Red Sox announced Friday afternoon that they had claimed speedster outfielder Tim Locastro off waivers from the New York Yankees. Locastro, a 29-year-old who has played with Los Angeles Dodgers, Arizona Diamondbacks, and Yankees,...
MLB・27 DAYS AGO
ClutchPoints

Noah Syndergaard helped the New York Mets reach the World Series in 2015, his first season there, and has called New York his home until he signed with the Los Angeles Angels in free agency. He said that his decision to leave the Mets was the toughest choice of his life.
MLB・13 DAYS AGO
NJ.com

More problems for Robinson Cano. The New York Mets announced Wednesday “Canó was removed from the Estrellas Orientales roster with lower back discomfort. He has been prescribed physical therapy and is considered week to week.”. ESPN’s Hector Gomez was the first to report on Cano’s plans to play in the...
MLB・8 DAYS AGO

Ever since the New York Yankees’ 2021 season came to a close, the organization made it very clear that it intended on making some big-time offseason moves. When MLB general manager meetings kicked off earlier this month, the Yankees were quickly mentioned as potential trade partners for the Oakland Athletics’ All-Star first baseman Matt Olson.
MLB・16 DAYS AGO
FanSided

The New York Mets are skimming the free-agent pool, and one name that could make sense would be Steven Matz. Ironically, the 30-year-old pitcher is the same guy the Mets traded to the Toronto Blue Jays last winter. A reunion between the Mets and Matz would make sense considering the...
MLB・14 DAYS AGO
NBC Sports

The Boston Red Sox continued to add to their organizational depth, signing former Detroit first-round pick Christin Stewart to a minor-league deal with an invitation to big-league camp.
MLB・2 DAYS AGO
dodgerblue.com

The Los Angeles Dodgers had Will Smith, Max Muncy, Justin Turner, Corey Seager, Trea Turner, Mookie Betts, Walker Buehler, Max Scherzer, Julio Urias and Kenley Jansen named among the nominees for the 2021 All-MLB Team. This is the third annual recognition for the top players, with winners being announced on...
MLB・22 DAYS AGO
MLB

It wouldn’t be a recent Milwaukee Brewers off-season without trade rumors and closer Josh Hader. Hader has been now linked to the Philadelphia Phillies, who are looking to make a World Series run next year after just missing the playoffs in 2021 to the eventual World Series Champions Atlanta Braves. The Phillies will need several pieces to do that, including a shutdown closing pitcher.
MLB・13 DAYS AGO
Inside The Phillies

Kyle Schwarber's time with the Boston Red Sox may be coming to an end. The slugger had a mutual option on his contract for the 2022 season that ESPN reported was worth $11.5 million with a $3 million buyout, but he declined his option on Thursday. However, he could still...
MLB・28 DAYS AGO
FanSided

After the Los Angeles Dodgers decided not to give Clayton Kershaw a qualifying offer, he’s now an unrestricted free agent. Who could sign Kershaw as a free agent?. With Clayton Kershaw officially entering into free agency, there’s a ton of interest around where the legendary pitcher could land. The Los Angeles Dodgers chose not to give their longtime star a qualifying offer and now Kershaw has the freedom to look around and find a new team if he so chooses.
MLB・18 DAYS AGO
ClutchPoints

Freddie Freeman is one of the most coveted names on the free agency market this offseason, though it’s widely expected the former NL MVP will re-sign with the Atlanta Braves. Still, many clubs are surprised the veteran first baseman hasn’t agreed to a deal with the Braves yet, and it’s especially surprising considering what the 32-year-old is seeking on the open market.
MLB・2 DAYS AGO