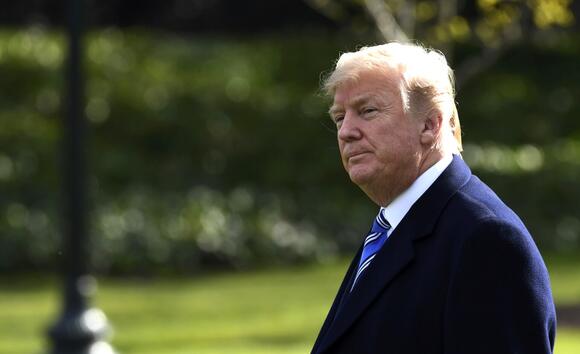 Donald Trump, who claims he never conceded the 2020 election, establishes himself as a former president in his lawsuit against the Capitol riot committee and National Archives.

The passage appears on page 11 of the complaint filed in federal court on Monday.

"Plaintiff Donald J. Trump is the 45th President of the United States. President Trump brings this suit solely in his official capacity as a former President under the PRA, associated regulations, the Executive Order, the Declaratory Judgment Act, and the Constitution of the United States," the lawsuit states.

The phrasing caught the eye of New York Times reporter Maggie Haberman, who has covered Trump for years.

"I don’t know how serious this suit is. It is notable that the suit actually refers to him as 'former President' Trump, which is something they've stayed away from. But Trump is going to do everything he can to try to drag this out as long as possible," she said on CNN.

In January, after the riot at the Capitol, Trump said in a video that a "new administration will be inaugurated on Jan. 20."

But Trump has repeatedly insisted he did not lose to Biden, who won 7 million more votes and 74 more electoral votes than his Republican challenger, with allegations of widespread fraud in the 2020 election. Election officials spanning from the state to federal level, including those in Trump's own government , have said they didn't find evidence to support his claim of a stolen election.

Still, that has not stopped Trump from telling his supporters as recently as this month he "never conceded" and encouraging Republicans not to vote in the 2022 and 2024 elections “[i]f we don’t solve the Presidential Election Fraud of 2020."

So trump is being represented by the attorney who represented Flynn who was found guilty and convicted of being a Russian spy.🤣 Classic trump...

Do something or never Imprison any one else again , back in the day Trump would have executed, he would not be having rallies!

Am I the only individual that is totally in disbelief that this obvious crack pot still getting air let alone press time?

The Biden administration has reached a deal with the Mexican government to restart a Trump-era border initiative that mandated all asylum-seekers be returned to Mexico while their claims are processed.
PRESIDENTIAL ELECTION・19 HOURS AGO
WashingtonExaminer

Wyoming Republican Rep. Liz Cheney, vice chairwoman of the House select committee tasked with investigating the Jan. 6 attack on the U.S. Capitol, issued a warning to former President Donald Trump amid his posturing that he wanted to debate members of the committee: Lie, and there will be criminal penalties.
CONGRESS & COURTS・1 DAY AGO
WashingtonExaminer

Asked about a shocking new claim that Donald Trump tested positive for Covid-19 before a presidential debate in 2020, Joe Biden had a blunt response.“I don’t think about the former president,” he told a press conference on Wednesday – before calmly turning and walking away.Mr Biden was being asked about a story from an upcoming book by Mark Meadows, Donald Trump’s last presidential chief of staff. In The Chief’s Chief, Mr Meadows recounts that the ex-president – known as “the former guy” in the Biden White House – was departing for a Pennsylvania rally three days before the debate...
PRESIDENTIAL ELECTION・18 HOURS AGO

Trump called it "not true" that Melania is enjoying private life and isn't interested in returning to Washington, D.C.,
PRESIDENTIAL ELECTION・19 HOURS AGO
HuffingtonPost

D.C. Metropolitan Police Officer Michael Fanone, who was brutally attacked by Donald Trump supporters during the assault on the U.S. Capitol, said the newly released FBI interview with the assailant who drove a stun gun into Fanone’s neck on Jan. 6 illustrates how the former president “manipulated” his followers. “If...
PUBLIC SAFETY・1 DAY AGO
Newsweek

The former president was making reference to a "pigs in a blanket, fry them like bacon" chant heard at a protest in 2015.
POTUS・22 HOURS AGO
Fox News

By the time the FBI showed up to his mom’s house in Southern California to arrest him in late March, 38-year-old Donald Trump supporter Danny Rodriguez knew he was in trouble. You’d be hard-pressed to find a bigger Trump fan than Rodriguez: He even tried to join the Army when Trump became president, showing up to a recruiting office with a Trump shirt on. So when Trump said that the election had been stolen, Rodriguez actually believed him, and when the president tweeted “Be there, will be wild!” about a protest in D.C. on Jan. 6, Rodriguez started making plans.
PUBLIC SAFETY・1 DAY AGO
Newsweek

The House could vote on whether to charge Jeffrey Clark with criminal contempt as soon as Thursday.
CONGRESS & COURTS・1 DAY AGO
Fox News

White House press secretary Jen Psaki refused to discuss previous remarks from President Biden about former President Trump which claimed "anyone who is responsible" for so many COVID-19 deaths should "not remain" in the White House. During a campaign debate last fall, Biden took a jab at then-President Trump for...
PRESIDENTIAL ELECTION・1 DAY AGO
Business Insider

Jena Griswold told The Washington Post that there was a concerted campaign to place Trump allies in roles overseeing elections.
COLORADO STATE・2 DAYS AGO

Over four years in the White House, President Donald Trump proved exceptionally adept at using his office to manipulate the legal system. But the Constitution gives no role — or powers — to ex-presidents. The result is that Trump’s run of evading accountability may finally be ending, as most recently shown by an appellate court’s skepticism Tuesday toward his attempt to block the House Jan. 6 Committee investigation.
PRESIDENTIAL ELECTION・1 DAY AGO
WashingtonExaminer

In this daily series, Newsweek explores the steps that led to the January 6 Capitol Riot. "Freedom never kneels except for God," retired Michael Flynn tweeted on December 2, sharing an advertisement from the We the People Convention, an Ohio activist group. In the ad, the Convention asks President Donald...
POTUS・1 DAY AGO
The Independent

The largest newspaper in Missouri has called for one of the state’s US senators to be promptly investigated by a congressional panel over his alleged role in the Jan 6 riot at the US Capitol.More than 10 months after the Senate ethics committee said it was to probe the actions of Missouri’s Josh Hawley and Texas’s Ted Cruz for their alleged encouragement to supporters of Donald Trump seeking to overturn the 2020  election, there has been little outward sign of progress.Several times, however, both Mr Cruz and Mr Hawley have defended their actions that day, with the Missouri senator...
ADVOCACY・2 DAYS AGO
CNN

(CNN) — The news that former Trump White House chief of staff Mark Meadows is now cooperating with the House's January 6 select committee investigation represents a clear and present danger to the former president and his attempts to rewrite the history of that fateful day. "He has produced records...
PRESIDENTIAL ELECTION・2 DAYS AGO
Washington Post

As the Jan. 6 select committee investigation gathers momentum, Donald Trump has gotten several cronies to refuse to testify by invoking “executive privilege.” That’s absurd on its face: Much of the information Trump wants to keep buried doesn’t relate to the office of the presidency, but rather to his incitement of mob violence to remain president illegitimately.
POTUS・2 DAYS AGO