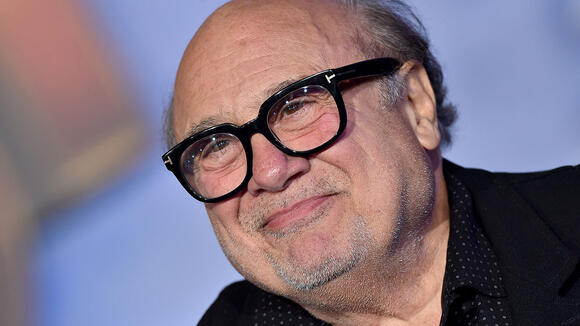 Danny DeVito has joined the luminous cast of Haunted Mansion , Disney’s ghostly family adventure based on one of the company’s signature theme park rides.

DeVito, whose last big-screen studio appearance was in 2019’s Jumanji: The Next Level, boards a project that already has LaKeith Stanfield , Tiffany Haddish, Owen Wilson and Rosario Dawson on the call sheet.

The details of the story and script by Katie Dippold are being kept deep in the bayou. The film follows a mother and her son who come across a mansion that is more than it seems while being orbited by various characters key to undressing the spooky mystery.

DeVito will play a smug professor.

DeVito is a veteran comedic actor whose more than 100 credits range from seminal 1970s TV series Taxi to major movies such as Romancing the Stone and Batman Returns , and appearing, for over the last 15 years, in long-running comedy, It’s Always Sunny in Philadelphia.

He is due to reteam with helmer Ivan Reitman and star Arnold Schwarzenegger for Triplets , a sequel to 1988 comedy hit, Twins . The decades-long gestating project, which has yet to land a distributor, is gearing up for a winter production start, with Tracy Morgan added to the mix.

DeVito is repped by CAA.

Emily Arlook, Bryan Greenberg, Andrew Schulz and Jordan Firstman have joined Kenya Barris’ untitled comedy feature at Netflix. Jonah Hill, Eddie Murphy, Nia Long, Julia Louis-Dreyfus and David Duchovny are starring in the feature, now in production. Hill and Barris co-wrote the script said to be an incisive examination of modern love and family dynamics and how clashing cultures, societal expectations and generational differences shape and affect relationships. Hill and Long are at the center, as a couple trying to navigate the issues, while Murphy, Louis-Dreyfus and Duchovny are parents with many sets of expectations. Arlook is playing a woman with whom Hill...
MOVIES・7 DAYS AGO
The Hollywood Reporter

Justin Long has signed with APA for representation in all areas. A fast-rising movie player in the 2000s, Long made his debut with a scene-stealing role in Galaxy Quest and then starring in the horror hit Jeepers Creepers. He went on to appear in movies that showcased his versatility, working in comedy, horror and action. Among the titles on his lengthy resume are Dodgeball, Drag Me to Hell, Live Free or Die Hard, He’s Just Not That Into You, Accepted, Idiocracy, Tusk and Waiting, working with Ben Stiller, Sam Raimi, Kevin Smith, Mike Judge, Robert Redford and Sam Esmail. He also became known...
CELEBRITIES・12 DAYS AGO
The Hollywood Reporter

Hollywood and theater owners have reason to be thankful this holiday season, even if moviegoing has yet to return to pre-pandemic levels. Walt Disney Animation’s musical adventure Encanto is succeeding in luring families back to the multiplex and is looking at a five-day Thanksgiving opening of $40 million or more after grossing $11 million on Black Friday. Fueled by Latinos and an A CinemaScore, Encanto should boast the top showing of the COVID-19 era for a family title. It is the first major animated studio title to receive an exclusive theatrical window since the pandemic struck in spring 2020 and opens as...
MOVIES・2 DAYS AGO
Best Life

Take a look at the new Netflix movie offerings for these first two weeks of November 2021, and you'll notice some patterns. With the holidays closing in and the end of the year approaching, there are plenty of new holiday movies and Oscar hopefuls to be found on the service. But that's not all that's just landed. In addition to a fairytale-like Santa origin story, a critically acclaimed period drama, and a new Western packed with movie stars, you'll also find some returning old favorites. So read on to see our picks for what movies to catch on Netflix this weekend.
MOVIES・17 DAYS AGO

Jurnee Smollett has landed the female lead in “The Burial,” a new courtroom drama from Amazon Studios. The “Lovecraft Country” actor will star opposite Jamie Foxx and Tommy Lee Jones in the Maggie Betts-directed project. Based on a true story, the film follows a bankrupt funeral home owner who decides to sue a rival businessman over a handshake deal gone wrong. The owner hires a flamboyant attorney (Foxx) to handle the case. Smollett will play Foxx’s opposing counsel, sources said. Betts is directing from a script written by Doug Wright. Producers on the film include Bobby Shriver via his Bobby Shriver Inc....
MOVIES・11 DAYS AGO
goodhousekeeping.com

Marry Me, an unconventional rom-com starring singer and actress Jennifer Lopez and Loki's Owen Wilson has released its first trailer. Coming to cinemas next year, the film marks JLo's return to the romantic genre after big hits like The Wedding Planner and Maid in Manhattan. Marry Me is the story...
MOVIES・10 DAYS AGO
ComicBook

Danny DeVito is officially 77 years old and fans of the actor have taken to social media to pay tribute to him while also shouting out their favorite performances. With a decades long and storied career under his belt with acclaimed performances in Batman Returns, One Flew over the Cuckoo's Nest, Get Shorty, and Matilda, plus voice roles in Space Jam, Hercules, and The Lorax, and his Emmy-winning TV role in Taxi, plus It's Always Sunny in Philadelphia, there's a lot from people to choose from, and they did. We've collected some of the tweets wishing DeVito a happy birthday below, many of which shouted out their favorite performances, further proof of his amazing career.
CELEBRITIES・12 DAYS AGO
1051thebounce.com

Jennifer Lopez and Owen Wilson are two unlikely lovers in a new rom-com. The trailer of Marry Me debuted today (November 18), following the story of music superstars Kat Valdez (Lopez) and Bastian (played by Maluma) who were supposed to get married before a global audience of 20 million fans. But when Kat learns seconds before her vows that Bastian has been unfaithful, she decides to marry Charlie Gilbert (Wilson), a stranger in the crowd, instead. Marry Me also stars Sarah Silverman and Game of Thrones’ John Bradley.
CELEBRITIES・11 DAYS AGO

J.Lo Just Shared a Glimpse of Her Upcoming Rom-Com with Owen Wilson (Including a New Song)

As if we weren't excited enough for Jennifer Lopez's next movie, this new teaser has us even more hyped. Lopez has been keeping quite busy these past few months, and she has a string of movies that are set to premiere in 2022, with the first being Marry Me. ﻿The romantic comedy is directed by Kat Coiro (﻿L!fe Happens﻿, And While We Were Here), and it's inspired by a graphic novel of the same name.
MUSIC・14 DAYS AGO
darkhorizons.com

Universal Pictures has released a trailer for the romantic comedy “Marry Me” starring Jennifer Lopez and Owen Wilson. The story follows a pop superstar (Lopez) who, during a live stream of her wedding, discovers she has been cheated on by her fiance (Maluma) and decides to pick a stranger (Wilson) in the crowd to marry.
MOVIES・11 DAYS AGO
The Dad

It’s always a treat when an actor gets to reconnect with his iconic character years later. And Disney is not one to shy away from that formula, whether it’s Luke Skywalker picking up his lightsaber again (and then chucking it into the sea) or resurrecting the X-Men animated series. And now, the entertainment giant is doing us another solid, by bringing the hilarious Owen Wilson back to one of his best roles: Lightning McQueen.
TV & VIDEOS・13 DAYS AGO
thecomedybureau.com

Based on a letter Blair wrote to Owen Wilson in 2007 after his suicide attempt telling him how much she loved him and appreciated him, the show will feature comedians reading a letters to the celebrities of their choice. Featuring.. CALEB HEARON. ROB HAZE. ATSUKO. DAVE MERHEJE. GRETA TITELMAN. RON...
CELEBRITIES・12 DAYS AGO

Yesterday, November 17th, was the incomparable Danny DeVito's 77th birthday, and he rang in the lucky seven-seven flanked by an incredibly eclectic crew. The group, who posed for a couple of photos before the meal got going, included actors like Lakeith Stanfield, Tiffany Haddish, and Rosario Dawson. It was a small gathering for the star, a party of nine in total, but the photos posted to Instagram show a warm and happy group genuinely enjoying one another's company.
CELEBRITIES・11 DAYS AGO
Us Weekly

‘Wedding Crashers’ Cast: Where Are They Now? Owen Wilson, Rachel McAdams and More

Keep your eye on the prize! Wedding Crashers taught an entire generation of moviegoers that the most fun parties are the ones where you don’t know anyone. The movie, released in July 2005, follows two divorce mediators — John Beckwith (Owen Wilson) and Jeremy Grey (Vince Vaughn) — who attend strangers’ weddings as a method of picking up women. It works out very well them until they meet Claire Cleary (Rachel McAdams) and her sister, Gloria (Isla Fisher), the daughters of an intimidating politician played by Christopher Walken.
MOVIES・3 DAYS AGO
The Hollywood Reporter

While moviegoing over the long 2021 Thanksgiving corridor didn’t come close to reaching pre-pandemic levels, Hollywood feasted on gains for family fare and adult dramas. Walt Disney Animation’s original musical adventure Encanto topped the domestic chart with a Wednesday-Sunday opening of $40.3 million, the best start of the pandemic era for an animated title. That includes $27 million for the three-day weekend. Overseas, Encanto opened to $29.3 million from more than 47 markets for a global launch of $69.6 million. Disney always releases an animated film over Thanksgiving, albeit to far bigger numbers. The last original movie to launch over the holiday,...
MOVIES・1 DAY AGO
The Hollywood Reporter

The 2021 Gotham Awards are taking place in New York, recognizing independent content across film and TV. Two Netflix titles, The Lost Daughter and Passing, topped this year’s film nominees with five nominations each, followed by three nods apiece for Apple’s CODA and Kino Lorber’s Test Pattern. The Lost Daughter, Passing and Test Pattern were nominated for best feature alongside A24’s The Green Knight and Neon’s Pig. On the TV side, the Gotham Awards is among the first awards bodies to recognize buzzy new series Squid Game, The White Lotus and Reservation Dogs, which each scored two nominations. For this year’s awards, the performance...
MOVIES・3 HOURS AGO
Variety

Rebecca Hall on the Gotham-Nominated ‘Passing’

In 2008 Rebecca Hall received a Gotham for best ensemble performance for her “Vicky Cristina Barcelona.” Thirteen years later she’s back with her directorial debut “Passing,” which garnered five Gotham nominations in the best feature, breakthrough director, screenplay, lead performance and supporting performance categories. Based on the eponymous novel by Nella Larsen, “Passing,” written by Hall, takes place in the 1920s and follows the lives of two Black women, one of whom passes as a white woman, due to her light skin tone, and marries a white husband who is clueless about her race. Did you always know that you wanted to...
MOVIES・7 HOURS AGO
The Hollywood Reporter

After five nights of starry events, Hollywood’s AFI Fest closed out on Sunday with the premiere of Warner Bros.’ King Richard, plus two very special guests — the film’s subjects, Venus and Serena Williams. The sisters — who are both executive producers on the story of their journey to tennis stardom, fueled by father Richard and his extensive plans for their careers — walked the red carpet alongside Saniyya Sidney, who plays a young Venus, and Demi Singleton, who plays a young Serena, as the cast reflected on portraying the famous family. “I’ve loved Richard Williams for a lot of years,” Will...
TENNIS・14 DAYS AGO
Oroville Mercury-Register

CELEBRITIES BORN ON THIS DAY: Damon Wayans Jr., 39; Nasim Pedrad, 40; Owen Wilson, 53; Oscar Nunez, 63. Happy Birthday: Backing up when forward motion is necessary will prolong matters better off behind you. Focus on putting an end to situations that make you uncomfortable and embracing the activities and people who put you in your comfort zone. Life is about choices, and it’s up to you to choose what’s best for you. Personal gain is within reach. Your numbers are 8, 12, 20, 26, 31, 39, 45.
CELEBRITIES・11 DAYS AGO