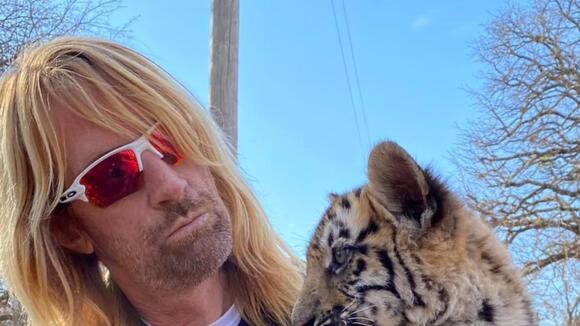 Now, his cause of death has been revealed. According to the New York Chief Medical Examiner, Cowie died from “acute and chronic alcohol use.”

His death has been classified as natural, TMZ reports.

In September, the outlet reported that Cowie was found dead at a residence in NYC. Cowie was discovered facedown in a bedroom, and insiders say there were no drugs at the scene, nor anything suspicious.

Months before his death, Cowie was arrested and booked for DUI in Oklahoma after he was involved in a two-car collision. He pleaded guilty.

Cowie worked for Joe Exotic at the Greater Wynnewood Exotic Animal Park in Oklahoma and with Jeff Lowe at his now defunct Tiger King Park.

The Tiger King Park Instagram account shared a photo and video of Erik with the message, “It comes with great sadness to say that a dear friend and hard working employee has passed away. Erik Cowie dedicated every waking moment caring for the animals at GWEAP & Tiger King Park. After the animals were ripped away by the Department of Justice, he sadly couldn’t take it anymore. He absolutely loved all the animals and would show up early to check on each and everyone. He had his Demons but the animals helped bring joy and happiness in his life. #rip #tigerking #erikcowie.”

alcohol is horrible on the body its a slow painful way to die, addition for whatever reason it maybe is very sad, i figure his drinking got worse after they took his animals, a broken heart an too much time on his hands.R.i.p.🙏💔

Acute means "sudden onset" Chronic means "long term" so, he started drinking one day and never stopped. That would be "Alcoholism" WHERE DO THEY GET THESE WRITERS. 🤔

it could've been accidental. that's what happened to my brother, God rest his soul. just drank too much one night & was found on the floor face down. NO one wanted to help except root thru his stuff.

Jeff Johnson, who appeared in Netflix’s hit documentary series Tiger King, has died aged 58. The former reptile dealer died after taking his own life in front of his wife in September, Oklaholma police told TMZ. An incident report obtained by the publication states Johnson was arguing with his wife...
CELEBRITIES・5 DAYS AGO
HollywoodLife

Joe Exotic: Why Is ‘Tiger King’ Star In Jail?

Joe Exotic aka the ‘Tiger King’ made a lasting impression on viewers of the titular Netflix show, but after the docuseries aired, he could only make an impression behind bars. So what really went down?. Tiger King 2 is coming Nov. 17 to Netflix, and fans again have the stars...
TV & VIDEOS・10 DAYS AGO
Distractify

The head zookeeper of Joe Exotic's (aka Joseph Allen Maldonado Passage) scandalous Oklahoma zoo, The Greater Wynnewood Exotic Animal Park, was found dead in an apartment in East Flatbush, Brooklyn, N.Y., in September 2021. Erik Cowie earned considerable popularity for his work ethic. Who was the Tiger King star? What was his cause of death?
CELEBRITIES・8 DAYS AGO
musictimes.com

Illinois-based band Planes Mistaken for Stars lead singer Gared O'Donnell reportedly died at the age of 44 last Wednesday, November 24, 2021. According to Pitchfork, the singer and guitarist passed away after going through a long battle with cancer. His bandmates confirmed the news regarding their "leader". "Our brother, our...
MUSIC・1 DAY AGO

Tiger King star Carole Baskin has suggested that her missing husband Don Lewis could be “alive and well in Costa Rica” when appearing on ITV’sThis Morning on Thursday (18 November). A lot of the first season of the hit Netflix show centred around rumours that Baskin had killed Lewis and...
TV & VIDEOS・9 DAYS AGO
E! News

After Brian Laundrie's remains were found in a Florida reserve, new details have come to light about his passing. On Nov. 23, the Laundrie family's attorney confirmed the 23-year-old's cause of death. "Chris and Roberta Laundrie have been informed that the cause of death was a gunshot wound to the...
PUBLIC SAFETY・4 DAYS AGO
Primetimer

Even though Stevens is an executive producer on Tiger King, he says "I had very little to do, to be honest, with the second season. But I’ve seen it, and once you get in, it’s hard to get out. It’s real. It’s all real. That’s what’s so wild. They’re not acting for the camera—well, most of them are not acting for the camera. It’s just the way some people are. Sadly, some of these animals have paid a terrible price. But the upside of Tiger King is that there’s a bill in Congress to try to protect big cats and try to stop captivity in the homes. They’re trying to do a national bill. It’s had a good effect in that sense."
PETS・10 DAYS AGO
thebrag.com

Today in unexpected celebrity news, Aussie actor Tammin Sursok has revealed she was once held at gunpoint by Tiger King star Joe Exotic. Speaking on HIT FM’s Breakfast with Stav, Abby and Matt, Tammin Sursok recalled encountering Joe Exotic while she was filming 2019’s Braking for Whales with her filmmaker husband Sean McEwen.
CELEBRITIES・8 DAYS AGO

As the world prepares for the premiere of Tiger King 2, there is one person that’s not exactly thrilled about the upcoming sequel to the 2020 documentary phenomenon. While chatting with TMZ on Tuesday (November 16th), Tiger King star Carole Baskin stated that while she is suing Netflix, she is not trying to stop the streaming service from putting out the sequel. She just simply wants any ties to her cut from the series because she believes that the producers duped her.
TV & VIDEOS・10 DAYS AGO
musictimes.com

Chris Daughtry dealt with painful news amid his tour as his stepdaughter, Hannah, was found dead in her home. The Nashville Police Department confirmed the tragic news on Friday, reporting that Daughtry's 25-year-old daughter was found dead inside her home in Nashville. "Due to the unexpected death of Chris and...
NASHVILLE, TN・14 DAYS AGO
The Independent

Photos of two gunmen suspected of ambushing and killing rapper Young Dolph as he was buying cookies at a Memphis store on Wednesday have emerged.The 36-year-old artist, real name Adolph Robert Thornton, Jr, was inside Makeda’s Homemade Butter Cookies when two men drove up and fire multiple rounds into the store through a window.Law enforcement confirmed photos of the two suspected shooters, which had been circulating online, were authentic, Fox13 reporter Jeremy Pierre said.In one of the images, Dolph’s camouflage-colored Lamborghini could be seen parked outside of the shop.Music stars Megan Thee Stallion and Chance the Rapper led tributes...
PUBLIC SAFETY・9 DAYS AGO
Popculture

Popular and Grammy-Nominated Singer Dead at 26 After Plane Crash

Brazilian singer Marília Mendonça was died in a plane crash, her representatives confirmed in a statement on her Instagram page. She was 26. Four other people died in the crash, which remains under investigation. Mendonça was on her way to perform in Caratinga. The plane crashed in the state of...
CELEBRITIES・21 DAYS AGO

Chris Daughtry’s daughter Hannah Price, 25, was found dead at her Nashville home on Friday, and now prosecutors are speaking out about the investigation. The 8th District Tennessee District Attorney’s office tells TMZ, "This is a death investigation and any attempt to classify it as a homicide investigation at this time is premature and irresponsible."
NASHVILLE, TN・11 DAYS AGO
HollywoodLife

Angelina Jolie took two of her kids, Shiloh and Pax, to the premiere of a French photographer’s documentary on Nov. 18, and they all posed together on the red carpet. Shiloh Jolie-Pitt, 15, stepped out for another red carpet appearance on Nov. 18. This time, she joined her mom, Angelina Jolie, and older brother, Pax Jolie-Pitt, 17, at the premiere of French photographer, JR’s, documentary, Paper & Glue, at the Museum of Tolerance in Los Angeles. The trio posed for photos with JR before the big event, with Angelina and Pax standing to one side of the artist and Shiloh standing solo on the other.
LOS ANGELES, CA・8 DAYS AGO
E! News

The world has lost a rising talent. Thomas Wells, who competed on The X Factor among other reality shows, died on November 13, his wife Jessica Wells wrote on Facebook. He was 46. "I feel like it's not real but I know it is," she shared in a heart-wrenching videotaped...
CELEBRITIES・20 HOURS AGO
TVOvermind

Michael B. Jordan and Lori Harvey are getting into the Thanksgiving spirit. On Instagram, Harvey gave fans a look at the delicious Thanksgiving spread — including mac and cheese, cornbread, turkey, salmon, potato gratin, spaghetti and more — as she poked fun of her boyfriend as he tried the food.
CELEBRITIES・1 DAY AGO