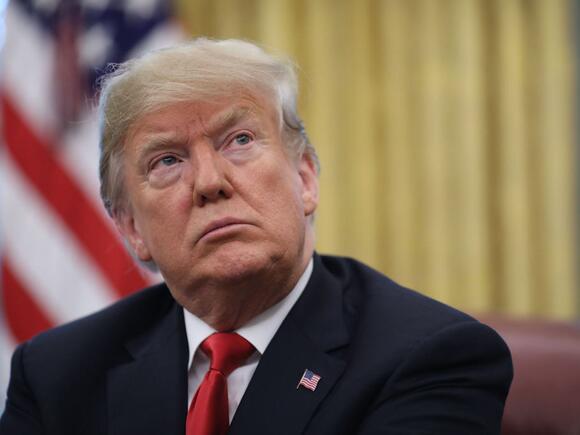 In November 2020, hackers using the same name defaced a campaign website for President Joe Biden, using it to promote "Turkish nationalist themes," as detailed in a report from the US National Intelligence Council.

Monday's hack included links to Facebook and Instagram accounts for the purported hackers, who identify as "RootAyyildiz."

A person claiming to be the hacker told Insider, in a Facebook message, that they carried out Monday's attack because they had "hacked Joe Biden before and now he is Trump," asserting that the current US president is "anti-Turkey and anti-Islam." They claimed to be a supporter of Erdogan but not an agent of the Turkish government.

Facebook did not respond to a request for comment on whether it intends to remove the accounts.

Have a news tip? Email this reporter: cdavis@insider.com

Former President Trump responded that Turkish President Recep Erdogan is a "Great Leader", so he wasn't upset about promoting him on his Website, but the Islamic stuff is worth a lawsuit.

If they wanted to protest something Biden did, why hack Trump's site? They should go after Biden. Wouldn't it be interesting to read all his email?

Amid turnover in Harris' office, reports have swirled for months concerning her office environment. An ex-Harris staffer told The Washington Post that the vice president is a highly-critical boss. "With Kamala you have to put up with a constant amount of soul-destroying criticism," the staffer said. A former staffer who...
PRESIDENTIAL ELECTION・12 HOURS AGO
Business Insider

Tesla CEO Elon Musk took a jab at older lawmakers, tweeting that there should be an upper age limit for anyone planning to run for political office.
ECONOMY・1 DAY AGO
Newsweek

The former president's statement prompted sarcastic comments on social media from a range of his detractors.
PRESIDENTIAL ELECTION・21 HOURS AGO
Fox News

Despite every effort of the Biden administration, the Justice Department, the congressional Democrats and the propaganda media, Hunter Biden is going to end up being investigated – and the impact on President Joe Biden, his administration and his legacy is going to be enormous. As more stories about Hunter Biden’s...
U.S. POLITICS・12 HOURS AGO

Symone Sanders dismisses notion that she's leaving Kamala Harris' office over displeasure with the job: 'I have earned a break'

"I'm getting married next year. I would like to plan my wedding. You know, I have earned a break," Sanders said of her exit from Harris' office.
U.S. POLITICS・16 HOURS AGO
The Guardian

In remarks to diners at his Mar-a-Lago resort in Florida on Saturday night, Donald Trump called the American media “crooked bastards” and Gen Mark Milley, the chairman of the joint chiefs of staff, a “fucking idiot”. The meandering, foul-mouthed speech to Turning Point USA, a group for young conservatives, was...
POTUS・1 HOUR AGO
Washington Post

When he first learned he had tested positive for the coronavirus, President Donald Trump was already aboard Air Force One, en route to a massive rally in Middletown, Pa. With him on the plane that Saturday evening were dozens of people — senior aides, Air Force One personnel, junior staffers, journalists and other members of the large entourage typical for a presidential trip — all squeezed together in the recirculating air of a jetliner.
POTUS・9 HOURS AGO
Washington Times

Biden, Trump, lawmakers in both parties unite in praise of Bob Dole

Tributes for former Sen. Bob Dole poured in from presidents, lawmakers of both parties, veterans and other admirers after the war hero and longtime Republican statesman died Sunday at age 98. President Biden, who served in the Senate with Mr. Dole for 23 years, praised the late Kansas Republican for...
PRESIDENTIAL ELECTION・16 HOURS AGO

Former Trump White House official Sebastian Gorka says the midterm elections next year will be the determining factor in whether former President Donald Trump runs again in 2024.
PRESIDENTIAL ELECTION・2 DAYS AGO
The Guardian

In a blurb on the cover of Mark Meadows’ new book, Donald Trump calls the former congressman a “great chief of staff – as good as it gets” and predicts “a great future together”. The former president has also promoted the book to his followers. Now the book is in...
POTUS・1 DAY AGO
POLITICO

CNN By Veronica Stracqualursi, CNN Bob Dole, a Republican Party stalwart and presidential hopeful who espoused a brand of plain-spoken conservatism as one of Washington’s most recognizable political figures throughout the latter half of the 20th century, died Sunday. “Senator Robert Joseph Dole died early this morning in his sleep. At his death, at age The post Bob Dole, giant of the Senate and 1996 Republican presidential nominee, dies appeared first on NewsChannel 3-12.
U.S. POLITICS・14 HOURS AGO

In this daily series, Newsweek explores the steps that led to the January 6 Capitol Riot. Joint Chiefs Chairman Army General Mark Milley spent December 4 at the White House, attending meetings with the national security team and principals—all the while, thinking he'd be fired. The chain of command, and the entire national security leadership had been disrupted.
POTUS・1 DAY AGO
Rolling Stone

A new NPR analysis reveals that since May of this year, people living in counties that voted for Donald Trump have been almost three times as likely to die from Covid-19 than those living in counties that Joe Biden won. NPR published its findings on Sunday after examining the number of deaths per 100,000 people across nearly 3,000 U.S. counties since May 2021, when vaccines became widely available. They found a disturbing trend: counties that voted for Trump with a 60 percent or more majority had 2.7 times the death rates as counties that Biden won. This data can partially be...
PUBLIC HEALTH・13 HOURS AGO
Fox News

"Life, Liberty, & Levin" host Mark Levin took aim at the media's incompetence and its kid-glove treatment of the Biden presidency on his show Sunday, contrasting their slanted coverage of Biden's time in office to that of his predecessor. "If you listen to the media in this country, you're going...
PRESIDENTIAL ELECTION・4 HOURS AGO
HuffingtonPost

WASHINGTON ― A faction of congressional Republicans threatened to shut down the government this week over what they call President Joe Biden’s “vaccine mandate.”. The rule from the Occupational Safety and Health Administration would not require employers to take action against unvaccinated workers so long as they’re willing to be tested weekly for COVID-19 ― but Republicans have ignored that part of the regulation.
U.S. POLITICS・1 DAY AGO
Newsweek

Nikki Haley, unable to escape 2024 intrigue, tells Republicans in SC: 'We will win'

CHARLESTON, S.C. — South Carolina's Republican presidential primary flickered to life Thursday night when former Gov. Nikki Haley took the stage in Charleston, where she addressed a room full of GOP voters who, at times, struggled to hide their own hopes about her political future. One man jumped to his...
CHARLESTON, SC・2 DAYS AGO
Shore News Network

WASHINGTON, DC – After nearly one full year of being unable to fulfill his promise to America to defeat COVID-19, President Joe Biden today said he is changing his plan and will have to now ‘beat it back’ before the virus can be defeated. During Biden’s first year, the administration...
PUBLIC HEALTH・2 DAYS AGO
Fox News

Sparks flew on the set of ABC's "The View" Friday as co-hosts clashed over President Biden's decision to restart the Trump-era "Remain in Mexico" policy. During a segment discussing Biden's decision, co-host Ana Navarro butted heads with Sunny Hostin and guest host America Ferrera over the policy, with the latter two excoriating Biden for breaking his campaign promise to end it, and the former arguing that the policy discouraged people from attempting to make the dangerous journey to the southern U.S. border.
PRESIDENTIAL ELECTION・2 DAYS AGO