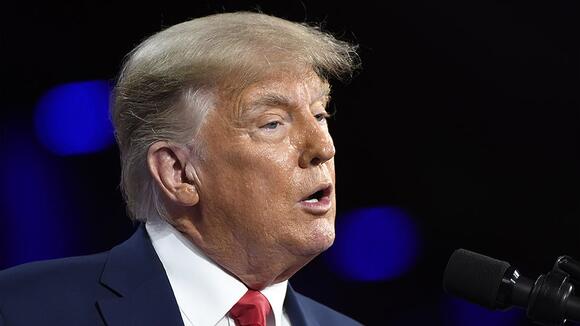 Former President Trump on Monday filed a federal lawsuit against the Jan. 6 select committee seeking to block the panel from obtaining his administration's records from the National Archives.

"The Committee’s request amounts to nothing less than a vexatious, illegal fishing expedition openly endorsed by Biden and designed to unconstitutionally investigate President Trump and his administration," the lawsuit reads. "Our laws do not permit such an impulsive, egregious action against a former President and his close advisors."

The committee requested in August that the National Archives turn over an exhaustive list of records from Trump's time in office and in the aftermath of the Capitol riot.

"As it relates to any materials being sought in situations like this, where fundamental privileges and constitutional issues are at stake and where a committee has declined to grant sufficient time to conduct a full review, there is a longstanding bipartisan tradition of protective assertions of executive privilege designed to ensure the ability to make a final assertion, if necessary, over some or all of the requested material," the lawsuit reads.

In a joint statement from the panel's Chair Bennie Thompson (D-Miss.) and Vice Chair Liz Cheney (R-Wyo.), the committee vowed to "fight the former President’s attempt to obstruct our investigation."

“The former President’s clear objective is to stop the Select Committee from getting to the facts about January 6th and his lawsuit is nothing more than an attempt to delay and obstruct our probe. Precedent and law are on our side. Executive privilege is not absolute and President Biden has so far declined to invoke that privilege," they said in a Monday statement.

"Additionally, there’s a long history of the White House accommodating congressional investigative requests when the public interest outweighs other concerns. It’s hard to imagine a more compelling public interest than trying to get answers about an attack on our democracy and an attempt to overturn the results of an election."

It’s unclear how Trump’s case will fare in court. The Supreme Court has previously ruled that former presidents have some authority to assert executive privilege, but the full scope of it has never been addressed by the courts.

Even if a court decides that Trump can assert executive privilege over certain documents, judges will have to weigh the former president’s interest in confidentiality against the committee’s investigative need for the records.

The complaint targets Thompson, the committee, U.S. Archivist David Ferriero, and the National Archives and Records Administration (NARA). NARA did not immediately respond to a request for comment.

The lawsuit argues that the committee has not demonstrated a legitimate legislative purpose for the documents that would override the former president's assertions of executive privilege.

Taylor Budowich, a spokesman for Trump, tweeted on Monday, "Today, President Trump filed a lawsuit in defense of the Constitution, the Office of the President, and the future of our nation, all of which the sham Unselect Committee is trying to destroy."

The sweeping request from the committee asked the Archives to turn over documents and communications from within the White House “relating in any way” to Trump's wife, children and a who's who of aides within Trump's orbit, ranging from high-ranking White House officials to advisers such as Rudy Giuliani .

It has also issued numerous subpoenas to his former aides seeking their testimony.

The committee is set to vote Tuesday on whether to move forward with a criminal contempt referral for former Trump White House strategist Steve Bannon for refusing to comply with a subpoena for his testimony.

Bannon cited the coming suit from Trump in his refusal to comply.

“We must accept his direction and honor his invocation of executive privilege. As such, until these issues are resolved, we are unable to respond to your request for documents and testimony,” Robert Costello, Bannon’s attorney, wrote in the letter.

“We will comply with the direction of the courts.”

Thompson, in addressing Bannon, said the former Trump adviser “has declined to cooperate with the Select Committee and is instead hiding behind the former President’s insufficient, blanket, and vague statements regarding privileges he has purported to invoke. We reject his position entirely.”

The other three Trump associates subpoenaed alongside Bannon are said to be “engaging” with the committee.

The former president's statement prompted sarcastic comments on social media from a range of his detractors.
PRESIDENTIAL ELECTION・22 HOURS AGO
The Guardian

In a blurb on the cover of Mark Meadows’ new book, Donald Trump calls the former congressman a “great chief of staff – as good as it gets” and predicts “a great future together”. The former president has also promoted the book to his followers. Now the book is in...
POTUS・1 DAY AGO
POLITICO

The House Select Committee to Investigate the Jan. 6 Attack on the U.S. Capitol has been busy. In the five months since the probe was launched, the committee has issued dozens of subpoenas to high-profile members of former President Trump’s circle, as well as a smattering of other MAGA-affiliated figures involved in the effort to overturn the results of the 2020 election. The process has been fraught for a number of reasons, but revelations that have emerged from Rolling Stone’s conversations with cooperating sources indicate the committee could be sitting on a mountain of material — material that could clarify what...
CONGRESS & COURTS・2 DAYS AGO

Lawyers for Donald Trump appeared before a federal appeals court on Friday to argue that the US government should take his place as the defendant in a defamation lawsuit filed by writer E Jean Carroll, who has accused him of rape. The former president’s attorneys told the judges he was...
POTUS・2 DAYS AGO
Washington Post

An earlier version of this article misidentified Rep. Bennie G. Thompson as Bernie. The article has been corrected. It’s rare when lawyers — as opposed to their clients — take the Fifth Amendment. But Jeffrey Clark, the former Justice Department lawyer who reportedly tried to help Donald Trump overturn the 2020 presidential election, is now claiming the privilege against self-incrimination to avoid testifying before the House committee investigating the Jan. 6 attack on the Capitol. He has just been joined in that posture by one of Trump’s main outside legal advisers, John Eastman.
POTUS・2 DAYS AGO
WashingtonExaminer

The House committee investigating the Jan. 6 Capitol riot agreed to delay its deposition of former Justice Department official Jeffrey Clark, whose attorney said he is dealing with a medical condition that prevented him from showing up this weekend.
CONGRESS & COURTS・2 DAYS AGO
Business Insider

John Eastman is the second witness who has invoked or plans to invoke the Fifth Amendment in response to a January 6 committee subpoena.
PRESIDENTIAL ELECTION・2 DAYS AGO

Federal appeals judges asked Friday whether a U.S. president's every remark is part of the job as they weighed whether former President Donald Trump can be held liable in a defamation case that concerns his response to a rape allegation.Trump and the Justice Department say he was acting in his official capacity when he spoke to the media about writer E. Jean Carroll's accusation, so they want to swap the U.S. government in for Trump himself as the defendant in her defamtion lawsuit. The change might sound technical, but it could make a big difference. Federal law makes it...
PUBLIC SAFETY・2 DAYS AGO
The Guardian

Former Trump lawyer John Eastman, who was connected to efforts to stop the certification of Joe Biden’s presidential election win on 6 January, will plead the fifth amendment protection against self-incrimination before the House select committee investigating the Capitol attack. The move by Eastman, communicated in a letter to the...
PRESIDENTIAL ELECTION・2 DAYS AGO
Newsweek

The House could vote on whether to charge Jeffrey Clark with criminal contempt as soon as Thursday.
CONGRESS & COURTS・4 DAYS AGO
POLITICO

The Jan. 6 panel has voted to hold another former Trump official in contempt: Jeffrey Clark.

However, Clark will come back to the panel for a second deposition. The vote: The select panel investigating the Jan. 6 insurrection voted unanimously Wednesday to hold former Justice Department official Jeffrey Clark in criminal contempt of Congress, sending the measure to the full House for consideration as soon as Thursday. But Clark also informed the committee he plans to assert his Fifth Amendment right against self-incrimination, complicating the committee’s calculus.
PRESIDENTIAL ELECTION・4 DAYS AGO

To date, Trump has made at least four assertions of executive privilege since leaving office in an attempt to block the release of sensitive information.
CONGRESS & COURTS・5 DAYS AGO
Reuters

Mark Meadows, Trump's chief of staff, is cooperating with a panel investigating the Jan. 6 Capitol insurrection and will appear for a deposition.
LOS ANGELES, CA・5 DAYS AGO
Washington Post

As the Jan. 6 select committee investigation gathers momentum, Donald Trump has gotten several cronies to refuse to testify by invoking “executive privilege.” That’s absurd on its face: Much of the information Trump wants to keep buried doesn’t relate to the office of the presidency, but rather to his incitement of mob violence to remain president illegitimately.
POTUS・5 DAYS AGO
USA TODAY

Trump Jan. 6 records on the line in federal appeals court

Judges grilled lawyers for former President Donald Trump about his bid to block the release of White House communications and other records to the lawmakers investigating the deadly Capitol invasion. The House select committee seeks those documents as part of its probe of the riot, when hundreds of Trump's supporters...
POTUS・5 DAYS AGO
NPR

Ex-Trump Chief of Staff Mark Meadows will appear before the Jan. 6 panel

President Trump's former chief of staff, Mark Meadows, will appear before the House committee investigating the January 6 attack on the U.S. Capitol. Today's announcement comes more than two months after Meadows received his subpoena. During weeks of disagreements between the two sides, Meadows claimed executive privilege prevents him from cooperating. Now he's turning over records and has agreed to appear. Joining us to discuss this is NPR congressional reporter Claudia Grisales. Hi, Claudia.
POTUS・5 DAYS AGO