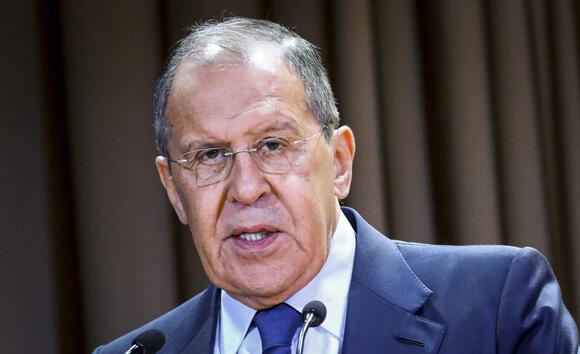 Russian Foreign Minister Sergey Lavrov has suspended his team’s diplomatic mission to NATO and closed the trans-Atlantic alliance’s two offices in Moscow in the latest dispute about diplomatic behavior and intelligence operations.

“We regret these steps,” NATO spokeswoman Oana Lungescu said, referring to the suspension of the Russian mission and the closure of NATO’s military liaison and information offices in Moscow. “NATO’s policy towards Russia remains consistent. We have strengthened our deterrence and defense in response to Russia’s aggressive actions, while at the same time, we remain open to dialogue, including through the NATO-Russia Council.”

The contretemps flared after NATO Secretary-General Jens Stoltenberg revoked the credentials of eight Russian attaches last week on the grounds that they are “undeclared Russian intelligence officers.”

"Lavrov declared that an “unfriendly” decision that unmasks NATO’s putative disinterest in "an equal dialogue or joint efforts to defuse military-political tension” between Moscow and Western capitals.

"Its policy towards Russia is becoming increasingly more aggressive,” Lavrov said . “The myth about the alleged ‘Russian threat’ is being promoted, in part, to strengthen the bloc’s internal affinity and to make it look important in the current geopolitical circumstances.”

US AND GEORGIAN LEADERS REAFFIRM MILITARY PARTNERSHIP AMID RUSSIAN THREAT

Moscow’s relationship with NATO powers cratered following Russian President Vladimir Putin’s decision to deploy an invading force of unmarked Russian troops into Ukraine to annex Crimea and destabilize eastern Ukraine in 2014. That deceptive military operation resulted in Russia’s expulsion from the group of industrialized democracies and set the geopolitical table for the 2016 election interference.

“It only confirms that the Russians were never really serious in having a substantial debate with NATO,” Europeum Director Zdenek Beranek, who helped lead the Czech diplomatic mission in the United States prior to taking over at the Prague-based think tank, told the Washington Examiner . "At least from what I know as an outsider, the NATO-Russia committee meetings were mostly fruitless. They were used as a platform for the Russian diplomats to lecture their Western counterparts, so there was frustration on the NATO side that the official interaction didn't make sense."

The election interference effort featured a Russian intelligence officer, who doubled as a business associate of former Trump campaign Chairman Paul Manafort, who “may have been connected to the GRU's hack and leak operation targeting the 2016 U.S. election,” according to a bipartisan Senate Intelligence Committee investigation , and pitched Manafort on a “pro-Russia” plan for ending the Ukraine conflict. That crisis deepened distrust for Moscow in Ukraine and other neighboring states, spurring interest in closer ties with NATO even as Russian officials accused the Western bloc of trying to encroach on its borders.

Lavrov insisted that NATO’s restrictions on the Russian mission since 2014 have made it obsolete.

"This corroborates the fact that NATO is not interested in an equal dialogue with us or any joint work,” he said. “If this is the case, we do not see much reason in continuing to pretend that things may change in the foreseeable future.”

Ukraine claims that it has found evidence of Russia helping an unidentified group plan a coup in the immediate future.
POLITICS・1 DAY AGO
WashingtonExaminer

Germany will continue to host U.S. nuclear weapons, the incoming government has decided, despite strong anti-nuclear traditions within the major parties of the coalition.
POLITICS・2 DAYS AGO
Business Insider

The buildup of Russian troops on Ukraine's border has prompted fears of an invasion. Former US diplomats and officials say there's a significant risk of a Russian incursion, given Putin's history. "One way or another, he wants Ukraine neutralized," Fiona Hill, a top Russia expert, told Insider. For the second...
POLITICS・20 HOURS AGO

T-84U: The Tank Ukraine Would Use in a War With Russia

The Ukrainian T-84U Main Battle Tank Does Not Have the Numbers: Russia may have as many as 1,000 tanks, armored personnel carriers, and self-propelled howitzers along the border with Ukraine, according to recent satellite imagery released this month. And that’s just the force located north of Ukraine. About 90,000 Russian troops are on the border too.
MILITARY・1 DAY AGO
Detroit News

Mud could help decide timing of any Russia move against Ukraine

Muddy terrain and the need for more troops on the ground make any large-scale Russian invasion of Ukraine unlikely until January at the earliest, military analysts in Moscow and the West say, creating a window of diplomacy to steer President Vladimir Putin away from a war. Those judgments come as...
POLITICS・1 DAY AGO
AFP

Ukraine's President Volodymyr Zelensky said Friday that Russia was sending "very dangerous" signals with troop movements on the border, warning that his military was ready to push back any offensive.  Zelensky said Ukraine was ready to take on Russia if Moscow decides to move troops across the border.
POLITICS・22 HOURS AGO
Business Insider

William J. Burns confronted the heads of Russia's security and intelligence agencies in Moscow but did not blame Russia, The Washington Post reported.
U.S. POLITICS・2 DAYS AGO

The president of Ukraine, Volodymyr Zelensky, said this Friday that the intelligence services have detected the preparation of a coup in the country for December 1 and ensures that there are recordings of the coup plotters. “I have information that on December 1 we will have a coup. I think it is interesting information,” he said during a press conference with national and international journalists.
POLITICS・1 DAY AGO
hngn.com

The US practiced attack drills with ten nuclear bombers driving tensions in Eastern Europe sky-high. This the Kremlin called a dire threat against Russia that will have a proper response to match it. Moscow was not pleased with the mock nuclear attack that was only 20-kilometers from its air defense...
MILITARY・2 DAYS AGO
US News and World Report

MOSCOW (Reuters) - Russia's military is tracking the guided missile destroyer USS Arleigh Burke after it entered the Black Sea to patrol with NATO allies, TASS news agency cited the Russian defence ministry as saying on Thursday. The manoeuvre comes at a time of high tension in the region, with...
MILITARY・1 DAY AGO

Ukraine’s President Volodymyr Zelenskiy said the country has uncovered a plot for an attempted coup that was due to take place as early as next week and involve people in Russia. Zelenskiy did not accuse the Russia government of playing a role in the coup attempt but warned of a wider threat of military escalation from Moscow, and said Ukraine would be prepared. The president did not give more details about the alleged coup, but said Ukrainian intelligence suspected the involvement of Russian citizens and Ukraine’s richest man, Rinat Akhmetov. “We have challenges not only from the Russian Federation and...
POLITICS・1 DAY AGO
thedrive

Russian armored units are apparently busy developing new countermeasures to drones and possibly top-attack missiles. Amid growing concerns about a potential new large-scale Russian invasion of Ukrainian territory, at least one Russian T-80 tank has apparently been sighted in occupied Crimea with a bizarre-looking ad hoc armor fit. Armor of this type has been increasingly appearing on Russian tanks as of late and appears to be primarily intended to defend them against attacks by loitering munitions and other armed unmanned aircraft. The solution, which is part of a wider trend of improved defenses for Russian tanks, may well have been inspired by the destruction wrought by drone-launched munitions during last year’s conflict in Nagorno-Karabakh, although it may have at least some capacity to decrease the effectiveness of certain top-attack guided missiles, too.
MILITARY・2 DAYS AGO
AFP

Hands on his machinegun, a Ukrainian soldier scans the grey steppe towards the positions of pro-Russian separatists in his country's war-scarred east. Armed with a Kalashnikov rifle, another Ukrainian soldier takes part in a shooting exercise a few kilometres away from Zhura's position.
MILITARY・1 DAY AGO

MOSCOW - Defenders of Memorial, Russia's most prominent rights group, urged the Supreme Court on Thursday to dismiss a case to shut it down, saying the move would mark a dark day for the country. In court for alleged violations of its designation as a 'foreign agent,' Memorial is facing...
CONGRESS & COURTS・1 DAY AGO
USA TODAY

What is happening at Ukraine's border? Putin's buildup of Russian troops sparks concern

SOCHI, Russia (AP) — Russian President Vladimir Putin said Thursday that Moscow would continue providing natural gas to Serbia on terms favorable to its ally. Putin voiced confidence that a new contract for gas supplies to Serbia would be signed quickly to replace the current one that expires at year-end.
ENERGY INDUSTRY・2 DAYS AGO
thedrive

The disclosure that Ukrainian troops have been employing Javelin missiles in combat comes as fears grow that Russian could launch a new invasion. Joseph Trevithick View Joseph Trevithick's Articles. The head of Ukraine's top military intelligence agency has confirmed, for what appears to be the first time, that Ukrainian troops...
MILITARY・4 DAYS AGO