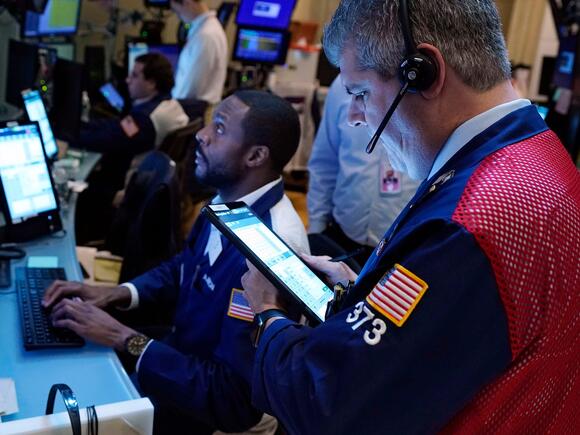 US stocks closed mixed Monday, near session highs, as the benchmark 10-year Treasury yield and oil prices give up most of their early gains.

The Dow Jones Industrial Average shed just over 36 points at the start of the trading week. Only five of its 11 major sectors closed higher, led by consumer discretionary and technology.

However, the benchmark S&P 500 and the tech-heavy Nasdaq Composite gained, lifted by Apple , which closed slightly higher after the tech giant unveiled new Mac laptops. All three major indexes opened lower but somewhat rebounded throughout the trading day.

But oil prices finished mixed. West Texas Intermediate crude tacked on 0.2% to settle at $82.44 per barrel. Brent oil , the international benchmark, slipped 0.72% to $84.25, marking its first drop in three sessions. Last week, it notched its eighth consecutive week of gains in what is so far its longest streak since a 10-week period through April 1999.

Investors continue to anticipate inflationary pressures that could compound further ahead of holiday demand amid supply-chain bottlenecks and labor shortages.

Industrial output posted its worst performance since the start of the pandemic, made worse by power shortages, supply-chain woes, and debt problems in its property sector.

In cryptocurrencies, bitcoin surged 5.5% to $62,667 ahead of an imminent exchange-traded fund debut on Tuesday. Some on Wall Street, including hedge fund chief Mark Yusko, think bitcoin is " overbought " as excitement keeps pushing the price higher. He said the asset might be shaping up for a pullback.

Altcoin prices were mixed. Ethereum, cardano, and litecoin each fell about 1% while meme-inspired dogecoin and shiba inu coin each jumped 7%.

Meanwhile, New York Attorney General Letitia James ordered the shutdown of two cryptocurrency lending platforms for "unlawful activities" and directed the investigation of three others. All the firms' names were redacted. However, initial reporting from The Block showed the letters labeled as "Nexo Letter" and "Celsius Letter."

3 reasons why gas prices are so high right now

Gas prices are the highest they've been in seven years. Demand is up, domestic supply was hit by a hurricane — and then there's overseas production.
TRAFFIC・1 DAY AGO
Markets Insider

As bitcoin enters a bear market, these are the 5 best performing cryptocurrencies over the past week

While bitcoin and ether dominate the headlines, there are more than 14,000 other crypto coins. With less liquidity and more volatility, these alternative cryptocurrencies can deliver investors massive losses or gains in a short period of time. These are the five best performing cryptocurrencies over the past week, according to...
STOCKS・21 HOURS AGO
FXStreet.com

BOOM! Game over. The Stock Market Crash is Upon Us.

BREAKING NEWS: Markets are crashing everywhere, stocks and currencies, there is likely a catalyst, we will know soon, but with all the pieces in place for a stock market correction and a higher US dollar already in place, there is the risk this can snow ball for weeks even months ahead.
STOCKS・1 DAY AGO
Markets Insider

The SkyBridge Capital boss said the Federal Reserve is now less likely to tighten aggressively, making this plunge in stocks a buying opportunity.
STOCKS・21 HOURS AGO

Stocks sank Friday, with the Dow Jones Industrial Average briefly falling more than 1,000 points, as a new coronavirus variant first detected in South Africa appeared to be spreading across the globe.
STOCKS・17 HOURS AGO
Markets Insider

Concerns of a new COVID-19 variant sent Wall Street's fear gauge soaring as much as 51% on Friday. The volatility surge could signal an end to the low volatility regime of 2021, according to Fairlead Strategies. This is the level the VIX needs to close above to signal a "difficult...
STOCKS・21 HOURS AGO
Markets Insider

Brent and WTI fell by more than 10%, given the expectation for a surplus of unused fuel to weigh on prices in the coming few months.
ENERGY INDUSTRY・21 HOURS AGO
Markets Insider

Little is known about the new COVID strain except it may be vaccine-resistant. Meanwhile traders are betting big on lockdown and a return to telework.
MARKETS・20 HOURS AGO

US stocks closed sharply lower Friday as investors moved out of risk assets after rapidly rising cases of coronavirus from a new strain drove worries that the pandemic would throw the global economy off its course of recovery. Wall Street's key benchmarks had an ugly Black Friday, with the Dow...
STOCKS・19 HOURS AGO
24/7 Wall St.

Friday's shortened trading session was dominated by the news of a new coronavirus variant and its impact on investors.
STOCKS・19 HOURS AGO
Markets Insider

'A black Black Friday': Here's what analysts are saying as global stocks plunge on fears about new COVID variant

Is It Time To Short High-Growth Stocks Amid Rising Treasury Yields?

Stocks of high-growth names on the Nasdaq took a severe hit during Wednesday’s trading session. On CNBC’s “Halftime Report,” Jenny Harrington of Gilman Hill Asset Management said they were not looking to buy the dip. She recommended buying stocks for their growth strategy and have a 5% or more free cash flow yield.
STOCKS・1 DAY AGO
NBC Philadelphia

Yields slid lower on Friday, as investor fled to the safety of bonds, with stock market futures also falling. The bonds market was closed on Thursday for Thanksgiving and there are no economic data releases or Treasury auctions slated for Friday, with markets closing early for the holiday weekend. U.S....
BUSINESS・1 DAY AGO
FOXBusiness

Top oil producers Saudi Arabia and Russia are considering pausing their planned efforts to ramp up oil production, according to The Wall Street Journal, after the U.S. and other energy-consuming countries said they would tap their national strategic petroleum reserves in an attempt to bring down gasoline prices. The Journal...
ENERGY INDUSTRY・1 DAY AGO
Markets Insider

Wall Street's verdict is in: the US economy is booming again

JPMorgan and Morgan Stanley just boosted estimates for Q4 growth, but it's a strange type of boom — Americans' economic optimism is at a decade low.
STOCKS・2 DAYS AGO
Markets Insider

Bitcoin lost 8% Friday to touch its lowest level in two months, as cryptos fell across the board. The discovery of a new, potentially vaccine-resistant COVID-19 variant drove investors to dump riskier assets. Metaverse-linked coins plunged, reversing a recent rally, as sand dropped 4.2% and mana lost 10.8%. Sign up...
MARKETS・1 DAY AGO
kitco.com

Gold/silver/commodities: where is the bottom?

The selloff this week began when President Biden nominated Fed Chair Powell to a second term leaving precious metals struggling to digest his hawkish monetary policy and aggressive stance on tapering. The news had boosted the U.S. Dollar and Treasury Yields. Traders that hold precious metals then begin to weigh opportunity costs for maintaining non-yielding assets, and the Gold liquidation begins. The non-trending volatility spike further accelerates the panic liquidation, which is how $1 selloffs occur in the Silver market. So where is the bottom again? Our models show that the 10-Year Treasury Yields will face enormous pressure between 1.75-2%, and with CPI holding above 2%, negative real yields pressure will build on U.S. Equities, and funds will flow back into Gold. To further expand your knowledge on Gold, we cover the economic backdrop and all the quantitative analysis in our "Gold Trends Macro Book," You can request yours here: Free Gold Trends Macro Book.
ECONOMY・2 DAYS AGO
WOOD TV8

Ahead of a shortened session of trading on Friday, investors were shedding perceived riskier assets and stock futures were tumbling as a new, contagious COVID variant was found in South Africa.
WORLD・1 DAY AGO