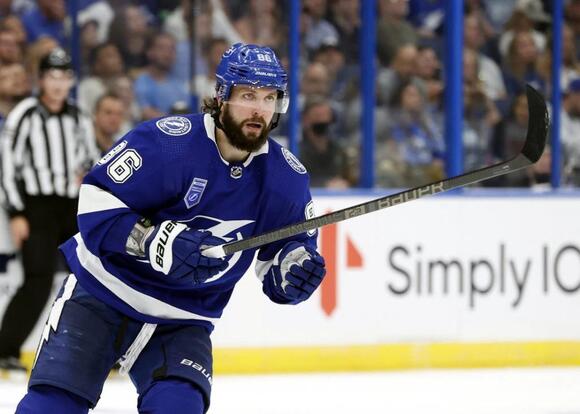 “Definitely not a day-to-day thing,” Cooper said of Kucherov, who was injured in a collision with Washington forward Garnet Hathaway during Saturday’s 2-1 overtime win against the Capitals.

Kucherov, 28, missed the 2020-21 regular season following hip surgery in December. He returned with a flourish in the playoffs, recording 32 points (eight goals, 24 assists) in 23 games to help the Lightning repeat as Stanley Cup champions. 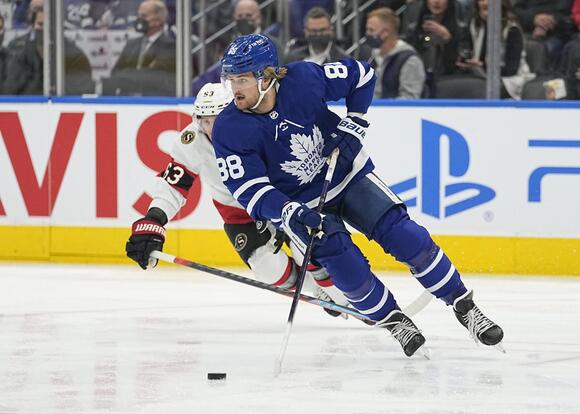 Kucherov won the Hart Memorial Trophy, Art Ross Trophy and Ted Lindsay Award in 2018-19 after scoring a career-high 41 goals and leading the league in assists (87) and points (128).

Late comeback bid falls short as Flyers drop to Lightning in shootout originally appeared on NBC Sports Philadelphia. Despite some late-game theatrics, the Flyers fell to the Lightning, 4-3, in a shootout Thursday night at the Wells Fargo Center. Claude Giroux forced overtime with nine ticks left on the regulation...
NHL・14 DAYS AGO
Reporter

It was just over 20 months ago when the Flyers, in the midst of a road trip through Florida, found their game at Tampa Bay postponed. Home they came, chatting about their coronavirus cancelation, certainly unaware of the scope of the impact that it would have on the world in the coming months and now years.
NHL・14 DAYS AGO
The Hockey Writers

In the summer of 2012, the Tampa Bay Lightning made two free-agent signings that addressed their blueline for the immediate future. The move fans may remember more might be inking Matt Carle to a six-year contract worth $33 million. He played four seasons with the club before being bought out of his deal following the 2015-16 season. The Lightning’s other transaction on defense through free agency was signing Sami Salo to a two-year contract.
NHL・13 DAYS AGO
Sportsnaut

Tampa Bay Lightning star center Brayden Point will be sidelined indefinitely with an upper-body injury, the team announced during Sunday
NHL・10 DAYS AGO

The Tampa Bay Lightning had many incredible players appear for the organization during the 2010s. So why not put together a dream team of Lightning players that appeared for them during the 2010s? Correct. There is not reason not to, so let’s do it!. Rules: To be eligible, a player...
NHL・13 DAYS AGO
rawcharge.com

Tampa Bay Lightning at Philadelphia Flyers: GAME Fifteen. Tonight’s game against the Philadelphia Flyers is a quick road trip in the middle of a long stretch of home games for the Tampa Bay Lightning. Entering this matchup, the Lightning are still running their point streak, which was extended to eight games after beating the New York Islanders on Monday. Since the beginning of November the team is fourth in the league in point percentage and second in the Atlantic division, trailing only to the Toronto Maple Leafs. The Bolts are also one of the three teams, which didn’t suffer a regulation loss during this month.
NHL・14 DAYS AGO
The Hockey Writers

The New Jersey Devils look to bounce back this afternoon against the defending Stanley Cup Champions. They will try to earn two points in regulation for the first time since Nov. 11. Dawson Mercer, Pavel Zacha, Andreas Johnsson and Jesper Bratt are all tied with a team-leading 11 points on the season.
NHL・12 DAYS AGO
rawcharge.com

Yesterday the Tampa Bay Lightning suffered their first loss in regulation in November, thereby ending their nine-game point streak. The Lightning controlled the game throughout the first two periods, but couldn’t prevent the New Jersey Devils’ comeback in the third period, conceding four unanswered goals [Raw Charge]. There is little...
NHL・11 DAYS AGO

The Tampa Bay Lightning learned a hard lesson on Saturday afternoon after blowing a 3-1 lead in the game against the New Jersey Devils. Jon Cooper sensed some arrogance in the way his team played, even saying that “some old bad habits crept into our game from years when we didn’t go very far in the playoffs“. The Lightning, however, need to move on from that loss as quickly as possible, as they’re hosting the Minnesota Wild today in another afternoon game.
NHL・11 DAYS AGO
FingerLakes1.com

The Tampa Bay Lightning have recalled forward Alex Barre-Boulet from the Syracuse Crunch of the American Hockey League, vice president and general manager Julien BriseBois announced today. Barre-Boulet, 24, has skated in nine NHL games this season with the Lightning and Seattle Kraken, posting a goal and four points to...
NHL・11 DAYS AGO
Sportsnaut

When the two-time defending Stanley Cup champion Tampa Bay Lightning take the ice against the Flyers for the second time in six days on Tuesday night, they’ll do so without one of their best players, center Brayden Point. After sustaining an upper-body injury on Saturday against the New Jersey Devils...
NHL・9 DAYS AGO

The Tampa Bay Lightning have reassigned defenseman Fredrik Claesson to the Syracuse Crunch, vice president and general manager Julien BriseBois announced today. Claesson, 29, has skated in three games with the Lightning this season, posting two shots on goal. The 6-foot-1, 196-pound defenseman has appeared in 164 career NHL games over seven seasons, notching seven goals and 28 points. He’s also skated in three games for the Crunch this season, posting one assist and a plus-3 rating.
NHL・8 DAYS AGO
NHL

TAMPA BAY - The Tampa Bay Lightning have recalled defenseman Sean Day from the Syracuse Crunch of the American Hockey League, vice president and general manager Julien BriseBois announced. Day, 23, has skated in 15 games with the Crunch this season, posting two goals and 10 points to go along...
NHL・6 DAYS AGO
Sportsnaut

Ryan Hartman scored the go-ahead goal midway through the third period to lift the Minnesota Wild to a 4-2 win
NHL・4 DAYS AGO
rawcharge.com

It’s been just over two years since the St. Louis Blues and the Tampa Bay Lightning have faced each other. If you’re keeping score that was two Lightning Stanley Cups one one Raw Charge editor ago! On November 27th, 2019 the Blues defeated the Lightning in Tampa, 4-3. Brayden Schenn scored the eventual game-winner on the power play.
NHL・2 DAYS AGO

BOSTON (CBS) — Bruins winger Brad Marchand was dominant on Sunday night against the Canucks, scoring a game-tying goal and registering a primary assist on the go-ahead goal, both of which came in the third period of Boston’s 3-2 win. This development no doubt irked many Canucks viewers back in Vancouver, as Marchand has never been the most celebrated player in British Columbia, dating back to his and the Bruins’ Stanley Cup win over the Canucks in 2011. Capping off some chaos. Marchy's tying goal on the power play is tonight's @JagermeisterUSA Shot of the Game!@Bmarch63 | #NHLBruins pic.twitter.com/8mpV8cDTtO — Boston Bruins (@NHLBruins) November...
NHL・3 DAYS AGO
CBS Boston

BOSTON (CBS) — In the case of Tuukka Rask potentially rejoining the Boston Bruins this season, there’s been a whole lot of open-ended, speculative talk. Now, there’s something a bit more definitive — and it points to a return seeming borderline imminent. Bruins general manager Don Sweeney spoke to the media on Tuesday, and at the end of the session, he was asked if the team has spoken with Rask about a contract. Sweeney said that such a time has not yet come, but when it does, he’s confident that the two sides will be able to reach an agreement. “If indeed...
NHL・2 DAYS AGO
10 Tampa Bay

TAMPA, Fla. — The Tampa Bay Lightning will host its annual "Hockey Fights Cancer Night," taking time to "honor, recognize and acknowledge all those battling [cancer], as well as the families, doctors and caregivers who continue the fight each and every day." The event will begin at 5 p.m. on...
NHL・13 DAYS AGO