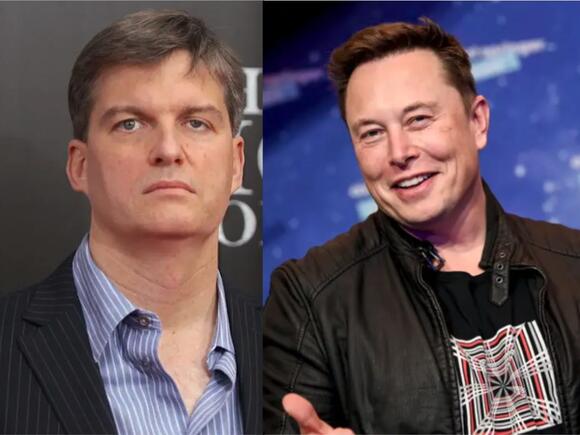 Michael Burry's Scion Asset Management is no longer short Tesla stock via puts, according to a Friday report from CNBC.

Burry told CNBC by e-mail that the media had blown his Tesla short bet out of proportion and that it was just a trade.

"No, it was a trade," Burry told CNBC when asked if he was still short Tesla. "The options bets were extremely asymmetric, and the media was off by orders of magnitude."

A put option gives its holder the right to sell shares at a certain strike price set in the future. If the stock falls below the strike price before expiration, the value of the put will increase.

Shares of Tesla are up 24% year-to-date and recently reclaimed the $800 price level following a strong third-quarter delivery number from the electric vehicle manufacturer.

Tesla's rise in 2021 makes it less likely that Burry scored a profit on the put position, but the stock did experience a near-40% decline from its record high as growth stocks fell out of favor with investors amid a resurgence in cyclical stocks earlier this year.

Additionally, not knowing the strike price or expiration date of Burry's puts makes it impossible to gauge whether the position turned out to be profitable or not.

Burry has previously called Tesla's valuation of more than $800 billion "ridiculous" and told CEO Elon Musk over Twitter that he should raise more capital and sell stock to take advantage of such high prices.

Why Nio Stock Was Moving 5% Today

The Chinese EV maker is teasing that it will soon expand on its global aspirations.
STOCKS・7 HOURS AGO
Markets Insider

Tesla Inc. stock snaps a losing streak that took it near a bear market after UBS analysts slapped a $1,000 price target on the stock and called the electric-vehicle maker the EV market's "undisputed leader."
STOCKS・12 HOURS AGO
MarketWatch

Ethereum is outperforming bitcoin because its a technology bet rather than a bet on inflation, says crypto bull Mike Novogratz

Mike Novogratz said Wednesday that ethereum is attractive as a bet on the technology versus bitcoin's appeal as an inflation hedge. The crypto bull said ethereum is outperforming bitcoin as the Fed looks to tackle inflation. He added that the economy is booming, and expects the markets to see a...
BUSINESS・8 HOURS AGO
The Motley Fool

Fresh off earnings, one Wall Street analyst is optimistic.
STOCKS・4 HOURS AGO
The Motley Fool

Microsoft is one of the world's largest companies, but investors do have concerns.
STOCKS・14 HOURS AGO

Lynch, who scored a 29% annualized return over 13 years as the head of Fidelity's Magellan fund, argued index-fund investors are "missing the boat."
STOCKS・6 HOURS AGO
The Motley Fool

A diverse basket of EV and renewable energy stocks built for the long term.
STOCKS・11 HOURS AGO
The Motley Fool

These 3 EV stocks have beaten others to top the charts.
ECONOMY・11 HOURS AGO
24/7 Wall St.

Reduced concern for the impact of the Omicron variant of the coronavirus lifted stocks higher on Monday. The effect appeared to be continuing in Tuesday's premarket trading.
STOCKS・1 DAY AGO

Buffett's Berkshire Hathaway conglomerate has more than quadrupled its money on Apple after plowing $36 billion into the stock.
BUSINESS・1 DAY AGO
The Motley Fool

Is Tesla's stock price due for a fall, or is there more growth yet to come?
STOCKS・1 DAY AGO
The Motley Fool

Instead of chasing momentum stocks into the graveyard, do this, strategist says

Assets that are priced for perfection against record profits and liquidity could falter for any number of reasons, this strategist says.
STOCKS・1 DAY AGO
24/7 Wall St.

XPeng delivered more electric vehicles in China than Nio in both October and November.
ECONOMY・1 DAY AGO
The Motley Fool

One analyst just upped his 12-month price target for the stock by 38%.
STOCKS・1 DAY AGO
The Motley Fool

2 Hypergrowth Stocks to Buy in 2022 and Beyond

These tech stocks could see massive growth as they expand their niche businesses.
STOCKS・1 DAY AGO