ABBA have shared a clip of another new song from upcoming new album “Voyage”.

The group – made up of Benny Andersson , Anni-Frid (Frida) Lyngstad, Agnetha Fälskog and Björn Ulvaeus unveiled two new singles: “ I Still Have Faith In You ” and “ Don’t Shut Me Down ” after a high profile event in London.

They went on to reveal details of a new, ten-track album, “Voyage”, which will be the group’s first new studio album since “The Visitors”. It’s set for release on 5 November 2021 via Polydor/Universal Music.

Now, the group have teased more new music from the project. On TikTok today (18 October), the group shared a clip of new song “Just A Notion”.

The brief snippet revealed a strong pop-piano melody – similar to “Don’t Shut Me Down” – but a faster, more up-beat tempo.

You can listen to the clip of the new song here:

Speaking about the reunion recently, ABBA said in a statement: “It’s been a while since we made music together. Almost 40 years, actually. We took a break in the spring of 1982 and now we’ve decided it’s time to end it. They say it’s foolhardy to wait more than 40 years between albums, so we’ve recorded a follow-up to “The Visitors”.

“To tell the truth, the main inspiration to record again comes from our involvement in creating the strangest and most spectacular concert you could ever dream of. We’re going to be able to sit back in an audience and watch our digital selves perform our songs on a stage in a custom-built arena in London next spring. Weird and wonderful!

“To all of you who patiently have followed us in some way or another these past decades: Thank you for waiting – it’s time for a new journey to begin.”

ABBA’s last studio album was released in 1981 while their last new music came in the form of the 1982 single, “Under Attack”. Three previously unreleased songs were made public a decade later in 1993 and 1994. The band shot to international fame in 1974 after representing Sweden in the Eurovision Song Contest with the track “Waterloo”. 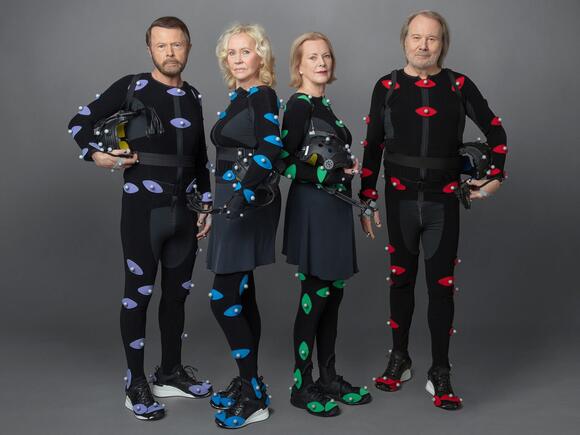 The group won – the first Scandinavian act to do so – after performing the winning song on stage at the event in Brighton. They subsequently went on to become one of the most popular recording acts of all time and have sold over 400 million albums worldwide to date.

At the peak of their fame, ABBA consisted of two married couples, but both relationships broke down during their time as a group.

The reunion was first mentioned by born in May 2020 by Ulvaeus. He said at the time: “It took half a minute and somehow we were back in time like we had been there yesterday as well. It was so strange. That feeling between us was extraordinary.”

ABBA also announced details of a state-of-the-art virtual concert series in which all four members of the band will appear on stage digitally. The group will appear with a live 10-piece band, in a purpose-built arena in London from 27 May 2022.

Ahead of her Saturday Night Live debut tomorrow night, Saweetie has released the single “Icy Chain.” The track is produced by Dr. Luke, Rocco Did It Again!, and Lil Aaron. Find “Icy Chain” below. Dr. Luke, who remains in a legal battle with Kesha, produced Saweetie’s Doja Cat collaboration “Best...
MUSIC・10 DAYS AGO
Pitchfork

Cardi B is back with her first solo song since February’s “Up.” The new track, “Bet It,” opens Warner Records’ Bruised (Soundtrack From and Inspired by the Netflix Film). The album also features new songs from City Girls (“Scared”), Latto, Rapsody, H.E.R., Saweetie, Flo Milli, Erica Banks, Young M.A, Baby Tate, and more. Hear Cardi B’s “Bet It,” along with the full Bruised soundtrack, below.
MUSIC・10 DAYS AGO
hotnewhiphop.com

Rod Wave Shares New Song "By Your Side"

The soul-trap wave certainly took over the rap game in 2021. While the lines between singing and rapping became increasingly blurred in the past 10 years, the new crop of rappers, specifically coming from the South, have taken the production of trap with the soul of R&B to create a new wave.
MUSIC・14 DAYS AGO
newschain

ABBA have announced plans to release their first ever Christmas song. They already have a song dedicated to the New Year, so why not add another holiday to the mix. Single Little Things will be released on December 3 and is taken from the Swedish supergroup’s recent number one selling album Voyage.
MUSIC・13 DAYS AGO

Just in time for Christmas, ABBA has announced their first-ever holiday single. The Swedish superstars will officially release the song “Little Things” on December 3. Taking to Instagram on Tuesday to share the track’s official artwork, the band teased, “Christmas is around the corner – Take a look at the cover art for ABBA’s Christmas song ‘Little Things’ being released December 3d on CD. Maybe something for the Christmas stocking?”
MUSIC・13 DAYS AGO
Pitchfork

Yaya Bey Shares New Song “Made This on the Spot”: Listen

Yaya Bey has shared a new song called “Made This on the Spot.” It features the violinist and composer V.C.R. “‘Made This on the Spot’ is a song that’s still pretty painful to talk about,” Bey said in a statement. “It’s a confusing situation honestly. Relationships go through so many transitions and the in-between phases can be really difficult. That’s the best I can say about this song.”
MUSIC・12 DAYS AGO
Pitchfork

Kavinsky, the French producer well known for his 2010 single “Nightcall,” is back with his first new track since 2013. The new song, titled “Renegade,” features vocals from Cautious Clay. Listen to “Renegade” and its instrumental below. Kavinsky worked on “Renegade” with Victor Le Masne and Justice’s Gaspard Augé at...
MUSIC・10 DAYS AGO
undertheradarmag.com

Just Mustard Share New Song “I Am You” From Forthcoming Album

Irish five-piece Just Mustard have shared a new song, “I Am You.” It is the first glimpse from the band’s forthcoming sophomore album, set to drop sometime in 2022, as well as being their first new music after recently signing to Partisan. They have also announced that they will be the supporting act for Fontaines D.C. for their upcoming European tour. Check out the new song below, along with a full list of tour dates for the band.
MUSIC・10 DAYS AGO

Morray took a little break from putting out new music, focusing on his live appearances around the country but he’s back. The Fayetteville rapper returns with a brand new single called ‘Never Fail’ where he enlists Benny The Butcher. The two artists have a different style from each other but they do well in joining forces on this track which features production from 808 Mafia. Listen to the song below until the video arrives later tonight.
MUSIC・11 DAYS AGO
officialcharts.com

It’s that time of year when loads of festive favourites edge their way towards the chart again - which means songs from across several generations of pop competing against each other on the Official Christmas Chart. Now that both Mariah and Wham have finally achieved Number 1 with their classics,...
MUSIC・11 DAYS AGO
Pitchfork

Listen to Clip’s “Calvin K”: The Ones

Clip refuses to waste her time on anyone who isn’t worth it. The New York City rapper’s dismissive delivery and monotone vocals fit neatly into her untouchable aesthetic. On “Calvin K,” she wants it to be known that she keeps a short leash: “If you act up, I’ll cut you off like that,” she raps over the song’s distorted drum’n’bass production. Her icy words cut through the beat’s organized chaos, making it clear that there’s a deadly seriousness to her promises to leave losers in the dust. She’s not playing around.
MUSIC・10 DAYS AGO
Punknews.org

Listen to the new song by Suckerpunch!

Today we are thrilled to bring you the premiere of the debut track from pop punkers Suckerpunch! The single is called "Hope Like Hell". The band said of the song,. "The concept behind this song hits close to home for all of us in the band: diving into a deep depression and willingly existing in that spiral. Many of us have experienced what depression does to you, and how it might make you want to not exist in one way or another. This song ends with a string of hope about a better tomorrow. Many of us feel like we can’t catch a breath, and this song shares that sentiment."
MUSIC・11 DAYS AGO

Huerco S. has announced Plonk, producer Brian Leeds’ first new album under that name since 2016’s For Those Of You Who Have Never (And Also Those Who Have) and QTT4. It’s out February 25 via Incienso. Watch the Jack Anderson–directed video for “Plonk IV” below. Leeds has also released music...
MUSIC・12 DAYS AGO
Pitchfork

Pearl Jam’s Eddie Vedder is back with a new song called “The Haves,” which is set to appear on his new solo album called Earthling. Plus, that album now has a release date—it’s out February 11 (via Seattle Surf/Republic). Listen to “The Haves” below. The album also features the previously...
RETAIL・11 DAYS AGO
wfpk.org

Listen hear! spotlights a song we like and think you will too. It was love at first listen! We immediately fell for Elise LeGrow‘s soulful vocals and her latest single, “Forever.” The song was inspired by her grandparents, Audrey and Osborne, who shared over 50 years of marriage. The track...
MUSIC・7 DAYS AGO
Pitchfork

Backxwash Shares New Song With Dreamcrusher Called “Thumbs Down (Not I)”: Listen

Backxwash has shared a new song called “Thumbs Down (Not I),” with Dreamcrusher. It’s the 33rd entry in the 2021 Adult Swim Singles program. Check it out below. In July, Backxwash released I Lie Here Buried With My Rings and My Dresses, the follow-up to her Polaris Prize–winning 2020 LP God Has Nothing to Do With This Leave Him Out of It. The new LP featured contributions from Clipping and Sad13. Of the new single, Backxwash said in a statement:
MUSIC・6 DAYS AGO
mxdwn.com

Eels recently shared a new track “The Magic” from their upcoming album Extreme Witchcraft, which is set for release on Jan. 28 via PIAS and the band’s label E Works Records. While staying true to their punk rock roots, this song adds synth effects that draw upon ‘60s psychedelic rock. This Magical Mystery Tour sound is fitting for a song about “feeling the magic.”
MUSIC・5 DAYS AGO
Pitchfork

Cavalcade have released a brand new single called "Dreaming About". The track is the follow up to the band's previous single "Feels Like Home" (Golden Robot Records). Lead singer Connor Duggan had this to say about the new track, "'Dreaming About' was born out of a recognition of just how much two people can learn in a relationship.
MUSIC・3 DAYS AGO
xsnoize.com

THE BOO RADLEYS share new single 'You And Me' - Listen Now

Having completed six, emotionally charged and joyously-received live shows around the UK this autumn, with rumours of more to come, The Boo Radleys return further emboldened with new music, revealing the synth-dashed, lilting indie-pop of You And Me. Drawn from their long-awaited, seventh studio album, Keep On With Falling, set for release on Fri 11 March 2022, the song finds the re-energised band huddled in harmony-rich melancholy.
MUSIC・3 DAYS AGO