FBI, US embassy working to obtain release of Americans kidnapped in Haiti 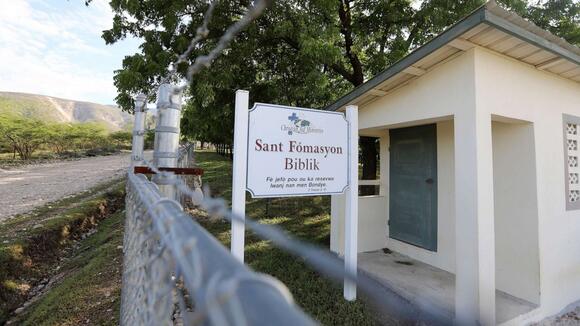 The FBI, the State Department, and other U.S. agencies have dispatched a team to assist Haiti an authorities in their efforts to negotiate the safe release of a group of missionaries kidnapped by a gang in the troubled country, according to U.S. officials.

Seventeen people, including 16 U.S. citizens, were abducted by a gang at a checkpoint in Haiti during an airport run on Saturday, sources told ABC News.

The kidnappings have put Haiti in the spotlight again after a turbulent few months, including a devastating earthquake and a presidential assassination -- although gangs' violence and use of kidnapping for ransom have plagued the Haitian people for years.

President Joe Biden has been briefed on the kidnappings and "what the State Department and the FBI are doing to bring these individuals home safely," White House press secretary Jen Psaki said Monday.

The team of U.S. officials is on the ground working with Haitian national police, while the U.S. embassy in Port-au-Prince has been in "constant contact" with Haitian authorities, the missionary group Christian Aid Ministries and the victims' family members, according to State Department spokesperson Ned Price.

The Haitian government suspects the gang known as 400 Mawozo to be responsible for the abductions, according to a source at the Haitian presidential office. Price declined to say whether U.S. officials had been in touch with the group.

The Ohio-based Christian Aid Ministries confirmed in a statement that a group of 17 people, including five children, were "abducted" while on a trip to an orphanage on Saturday. In addition to the Americans, the group includes one Canadian.

"Civil authorities in Haiti and the United States are aware of what has happened and are offering assistance. We continue to monitor the situation closely and are in earnest prayer," the missionary group said in a statement Monday.

"The kidnappers, like all people, are created in the image of God and can be changed if they turn to Him. While we desire the safe release of our workers, we also desire that the kidnappers be transformed by the love of Jesus, the only true source of peace, joy, and forgiveness," they added.

Haiti has seen a spike in gang violence in recent years amid political unrest and turmoil in its government, especially after July's assassination of President Jovenel Moïse -- the controversial leader accused of creating a constitutional crisis. Just weeks after a successor was sworn in -- the U.S.-backed Ariel Henry -- Haiti experienced a massive 7.2-magnitude earthquake in August that killed over 2,200 people.

"You put the poverty on top of repeated 7.0 plus magnitude earthquakes over the years, and it's just been brutal for the Haitian people and very difficult for them to establish not just the rule of law, but basic functions of society," said retired Col. Stephen Ganyard, an ABC News contributor and former assistant secretary of state.

Haiti leads the world with the highest kidnapping rate per capita. According to Haiti's Center for Analysis and Research in Human Rights, there have been at least 628 kidnappings this year, including 29 foreigners, and nearly 800 in 2020. Ganyard said westerners like Americans increasingly make for easier targets because there's a "sense that they can probably afford to pay."

The group 400 Mawozo is responsible for the most abductions, the center's director Gédéon Jean told the Washington Post , including allegedly kidnapping two French priests earlier the same day. The group is notorious for its violent tactics and for brazenly targeting clergy and churches -- particularly controversial in Catholic-majority Haiti.

With that rise in kidnappings, the Biden administration announced an additional $15 million for Haitian national police in recent weeks, $12 million of which went to anti-gang violence efforts, according to Price.

Even though Haiti can’t seem to get a break there is a victory that has to be acknowledged. Two missionaries have been freed after being held hostage over a month. As spotted on CNN two Americans have been let go after being captured. The Christian Aid Ministries confirmed the great news after days of speculation. “We have learned that two of the hostages in Haiti were released. We praise God for this! Only limited information can be provided, but we are able to report that the two hostages who were released are safe, in good spirits, and being cared for,” the organization stated in a statement on Sunday, November 21.
PUBLIC SAFETY・10 DAYS AGO
newsy.com

Two of 17 members of a missionary group who were kidnapped more than a month ago are safe and "in good spirits" after being freed in Haiti, their U.S..-based church organization announced. Christian Aid Ministries issued a statement Sunday saying it could not give the names of those released, why...
PUBLIC SAFETY・10 DAYS AGO
Knox Pages

Two of 17 people being held captive in Haiti have been released, according to the organization who sponsored the missions trip. Christian Aid Ministries, based in Holmes County, announced on its website Sunday the "two hostages who were released are safe, in good spirits and being cared for." The organization...
HOLMES COUNTY, OH・10 DAYS AGO
The Guardian

Two of 17 abducted members of a missionary group have been freed in Haiti and are safe, “in good spirits and being cared for”, their Ohio-based church organisation has announced. Christian Aid Ministries issued a statement on Sunday saying it could not give the names of those released, why they...
PUBLIC SAFETY・11 DAYS AGO

WASHINGTON, D. C. -- The Assistant Secretary of State for Western Hemisphere Affairs told U.S. Sen. Rob Portman earlier this week that he’s been personally involved in trying to recover 15 Christian missionaries from an Ohio organization who were kidnapped in Haiti six weeks ago. During a Senate Foreign Relations...
OHIO STATE・1 DAY AGO
Cleveland Jewish News

The first Chanukah party held by a Latin American embassy in America took place this week at the residence of the Guatemalan Ambassador to the United States H.E. Alfonso Quiñónez. The celebration was organized by the Combat Antisemitism Movement (CAM) and the Central America Forum for Israel. Ambassadors and high-level...
SOCIETY・17 HOURS AGO
Newsweek

Wife of American Man Kidnapped 5 Years Ago in Africa Says Release Being Hindered By U.S.

Els Woodke, wife of a man kidnapped from Niger by JNIM, said the U.S. government has put restrictions on her trying to raise ransom money.
14 DAYS AGO

A man from Spokane, Washington, Taylor Allen, was arrested in Mexico after allegedly murdering his girlfriend Sativa Transue during the couple's Thanksgiving trip abroad. Transue was found dead in their hotel room by a maid after guests at the hotel "heard screams in the middle of the night," according to Front Page Detective.
PUBLIC SAFETY・11 HOURS AGO
Daily Beast

The family of Sativa Transue, a 26-year-old American woman from Spokane, Washington who was found dead in her Cancun hotel room while on vacation with her boyfriend, said she looked like she had been “beaten to a bloody pulp” when Mexican authorities discovered her body on Saturday. “I received a...
PUBLIC SAFETY・1 DAY AGO
Telegraph

Agents from Israel’s spy agency Mossad recruited Iranian scientists to sabotage the nuclear facility where they were employed by smuggling in explosives disguised as boxes of food, it has been reported. The explosion at the Natanz nuclear facility in April completely destroyed the plant’s independent internal power system, which powered...
INDUSTRY・16 HOURS AGO
Vice

Confusingly, the leaders of this land of contradictions—who have said they’re motivated by California governor Gavin Newsom’s mandate that schoolchildren be vaccinated against COVID-19—have asserted that they are not seceding from either the state of California or the United States, but simply refusing to recognize their legal and political authority. (They cite the refusal of San Francisco, a Newsom stronghold, to enforce federal immigration laws as precedent, though that city has not declared itself a republic.) Footage from the council meeting, though, complicates the picture.
U.S. POLITICS・19 HOURS AGO

D.C. Metropolitan Police Officer Michael Fanone, who was brutally attacked by Donald Trump supporters during the assault on the U.S. Capitol, said the newly released FBI interview with the assailant who drove a stun gun into Fanone’s neck on Jan. 6 illustrates how the former president “manipulated” his followers. “If...
PUBLIC SAFETY・1 DAY AGO
The Associated Press

NEW YORK (AP) — As Donald Trump’s lawyers try to block the White House from releasing records to the congressional committee investigating the Jan. 6 Capitol insurrection, the former president faces a flurry of other investigations that could come to a head in the coming weeks and the new year.
5 HOURS AGO
Indy100

A new viral video is making just about everyone cringe.In the clip, an emotional alleged MAGA rioter is seen starting to cry in front of FBI interrogators as he is being questioned. When asked about former President Donald Trump calling him to Washington D.C the waterworks NBC journalist Scott MacFarlane shared the clip on Twitter. He wrote, “NEW: Court orders release of video of FBI questioning US Capitol breach defendant Daniel Rodriguez. This is a first listen in the interrogation room. He questions election, cites Biden’s rallies and says he’s long been an InfoWars fan.”NEW: Court...
PUBLIC SAFETY・1 DAY AGO
WashingtonExaminer

The mother of a sophomore student accused of opening fire inside his Michigan high school previously wrote an open letter to former President Donald Trump praising his support for the Second Amendment. Ethan Crumbley on Wednesday was charged as an adult with two dozen crimes — including murder, attempted murder...
MICHIGAN STATE・1 DAY AGO
The Independent

Americans with private medical insurance will be able to have the costs of at-home Covid-19 testing kits reimbursed by their insurers as part of a series of actions from Joe Biden’s administration to bolster the US against the coronavirus pandemic as the public health crisis enters a third year.The new policy will not cover upfront costs for such rapid at-home kits, which can range from $10 to $25. Instead, the roughly 150 million Americans with private insurance plans must file claims with their insurance providers to be reimbursed for the cost of at-home testing. Private insurers already cover in-office...
PUBLIC HEALTH・15 HOURS AGO
Fox News

Jason Transue was trying to convince his daughter, 26-year-old Sativa Transue, to drive across Washington state for Thanksgiving last week, but she told him on Thursday morning that she was going on a last-minute trip to Cancun, Mexico, with her boyfriend of three years, 31-year-old Taylor Allen. On Saturday morning,...
PUBLIC SAFETY・6 HOURS AGO