Two longtime Democratic congressmen announced Monday they will not seek re-election next year, putting the pressure on Speaker Nancy Pelosi to keep control of the House in her party's hands.

The two men each have more than 20 years experience on Capitol Hill.

'While it is time for me to retire, it is no time to flag in our efforts to secure a 'more perfect union' and to protect and expand our democracy. I am deeply grateful to the people of the Fourth District for making my service possible and for what we have been able to achieve together. And I promise, in the fifteen months remaining and beyond, to continue fighting for the just and inclusive country we believe in,' Price said in a statement.

'I believe the time had come to pass the torch to the next generation,' Doyle said. 'This was not an easy decision and I spent the most of this year going back and forth.'

Price first won election in 1996. Doyle was wiped out in the 1994 Republican wave election after previously holding his seat from 1987. He returned to Congress in 1997. 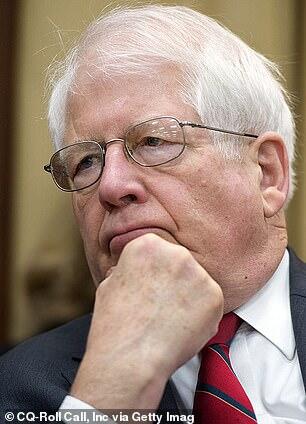 Doyle is the most senior member of Pennsylvania's congressional district, and his retirement is expected to set off a fierce political battle among members of that party to replace him.

Both seats are seen as trending Democratic - Price and Doyle both easily won re-election in recent years, signaling that their seats are likely to remain blue.

Democrats hold a slight edge on the generic congressional ballot: according to the polling average on FiveThirtyEight: Democrats lead Republicans 44 per cent to 42 per cent.

Still Doyle and Price make a total 12 Democrats not seeking re-election to the House next year, a sign of the party's fading hopes they will remain the majority party after the 2022 midterm election.

Their announcements also come as House Democrats are struggling to pass President Joe Biden's agenda, including his infrastructure plan and his budget package of social programs.

Historically a president's party loses seats in the next midterm election and Biden is expected to follow that model.

His approval rating has been sliding downward in Gallup's average, currently sitting at 43 per cent from its high of 57 per cent.

And with Democrats holding a scant four-seat majority in the House and, with the Senate at a 50-50 split, Republican hopes are high they can win control of Capitol Hill.

Also looming for Democrats is the Nov. 2 gubernatorial election in Virginia, which is being seen a referendum on Biden. The result will be used to forecast Democrats' chances of retraining control over Congress in next year's midterm election.

Democratic hopes are a little higher for the Senate.

No Senate Democrat has announced plans to retire or seek another office next year. And Republicans are defending more seats.

They have 20 seats up for grabs in 2022, including two in states Biden won in 2020, while Democrats are defending 14 and none in states carried by Donald Trump.

Several Republican senators announced they would not be on the ballot next year, complicating GOP efforts to win control of the Senate: Roy Blunt of Missouri, Rob Portman of Ohio, Richard Burr of North Carolina, Pat Toomey of Pennsylvania and Richard Selby of Alabama all decided no to run again.

What poll is Biden seeing a 43% approval rating. Must have only polled Democrats. I know if no one who is supporting him

Bless all politicians that give up their seat after 20 years. no one should be holding office at 80 and 90 years old.

If Republicans don't win. America will be a different place to live giving it up to socialism.

Assurances that President Joe Biden will seek reelection in 2024 have done little to silence speculation among Democrats over his potential successor.
PRESIDENTIAL ELECTION・18 HOURS AGO
Business Insider

The GOP wants us to forget what they actually represent. Mitch McConnell is focused "on the future," allowing his party to forget about the recent past. Democrats need to hold the minority party accountable as soon as possible. Eoin Higgins is a contributing opinion writer for Insider. This is an...
CONGRESS & COURTS・16 HOURS AGO
Business Insider

The Democrats need to stop acting scared, stop scaling back the Build Back Better, and pass the bill right now

Polls are showing broad support for Build Back Better's many provisions. Still, Democrats are trying to scale the bill back to appeal to Republican brass. Instead of paring back popular legislation, Democrats should pass the bill now. Karen Dolan directs the Criminalization of Race and Poverty Project at the Institute...
CONGRESS & COURTS・17 HOURS AGO
AOL Corp

Will any Republicans challenge Trump in 2024? DeSantis, Pence and the other top contenders to know

WASHINGTON – Many Republicans are spending the holidays planning for the congressional and gubernatorial elections of 2022 – especially Donald Trump and other Republicans who are thinking of running for president in 2024. The midterm elections are still more than 11 months away, but the Republican presidential race of early...
PRESIDENTIAL ELECTION・1 DAY AGO

Newspaper headline writers joke about keeping "Democrats in Disarray" set in type, just to be ready the next time it's needed. In any given year or season, that "standing head" pops up about as often as "Weather Snarls Traffic" or "Middle East Peace Talks Collapse." But we lack an equally...
PRESIDENTIAL ELECTION・20 HOURS AGO
Vanity Fair

Marjorie Taylor Greene to Kevin McCarthy: Meet My Cultish Demands If You Ever Want To Be House Speaker

In Washington, a town coursing with shameless ambition, Kevin McCarthy’s thirst for power — and apparent willingness to do anything to get it, no matter how degrading — stands out. Back in 2015, he mounted a doomed campaign for House Speaker that ended when he acknowledged he had failed to build a consensus around his candidacy. McCarthy stumbled in part because he accidentally admitted, in an interview with Sean Hannity, that Republicans’ Benghazi probe was to some degree a “strategy to fight and win” by tanking Hillary Clinton’s poll numbers. That scandal helped end his speakership bid, but not his designs on the gavel. Since 2018, when Nancy Pelosi succeeded Republican Paul Ryan, McCarthy has been on an embarrassingly transparent mission to unseat his fellow California representative, a dream he made explicit in his recent eight-and-a-half hour talkathon on the House floor. “I want her to hand that gavel to me,” McCarthy said.
CONGRESS & COURTS・1 DAY AGO
Fox News

The Lincoln Project is, on the surface, vehemently against Donald Trump ever becoming president of the United States again. The left-wing PAC founded by disgruntled ex-Republicans has called him a coward, a loser, an authoritarian, a clear and present danger to national security, and responsible for the deaths of hundreds of thousands of Americans.
LINCOLN, VA・1 DAY AGO
Newsweek

"This type of sadistic behavior can NOT be tolerated," Greene tweeted. "They must be held accountable for their reprehensible actions."
NEW YORK CITY, NY・1 DAY AGO

Georgia Rep. Marjorie Taylor Greene, one of Donald Trump’s staunchest allies in Congress, on Thursday laid out demands for a GOP leader to earn her vote for House Speaker if Republicans are able to retake the majority after the 2022 elections and cast doubt on House Minority Leader Kevin McCarthy being elected to the position. “We know that Kevin McCarthy […]
CONGRESS & COURTS・1 DAY AGO
MarketWatch

Senators return to Washington on Monday, and with them will come fierce debate over President Joe Biden’s sprawling social-spending and climate bill. Here are some of the hurdles as Democrats try to get the measure over the finish line.
CONGRESS & COURTS・1 DAY AGO
Washington Times

At least five moderate Democratic senators have reportedly told the White House they will not support his embattled nominee to lead the Office of the Comptroller of the Currency. Such opposition from within his own party would effectively kill the nomination of Saule Omarova to head the powerful bank-regulatory agency.
CONGRESS & COURTS・3 DAYS AGO

Progressive Rep. Rashida Tlaib is "fearful" about what could happen to Democrats' massive reconciliation spending plan in the Senate, she told Axios, because moderate Sens. Joe Manchin, Kyrsten Sinema, and others will have to approve of the bill in order for it to become law. "We have corporate Dems," Tlaib,...
CONGRESS & COURTS・5 DAYS AGO
Markets Insider

Trump, who threatened to withhold endorsements from Congressional Republicans, called McConnell a "fool" who should have resigned a "long time ago."
PRESIDENTIAL ELECTION・10 DAYS AGO

A moderate House Republican is firing off a warning shot at House Minority Leader Kevin McCarthy as he caters to his right flank in a quest for the speaker's gavel. "He's taking the middle of the conference for granted," the GOP lawmaker told CNN, speaking on condition of anonymity to discuss internal conference dynamics. "McCarthy could have a bigger math problem with the moderates."
CONGRESS & COURTS・11 HOURS AGO
Axios

Manchin’s next blow to liberals

During his six years as governor, Sen. Joe Manchin developed a rough three-part test he's taken to Washington: Are proposed programs paid for? Do they have bipartisan support? And do they solve a specific problem facing his constituents?. Why it matters: The West Virginia Democrat wields unparalleled power in a...
CONGRESS & COURTS・1 DAY AGO
Florida Phoenix

Quality Journalism for Critical Times WASHINGTON — Nearly 100 House Democrats are pushing the Senate to expand immigration protections in President Joe Biden’s massive social spending and climate bill, and advocates say that it may be a last opportunity for years to advance any reform. A letter to Senate Majority Leader Chuck Schumer of New York and the chairman of […] The post Immigration protections in Biden’s social policy bill face a new test in the Senate appeared first on Florida Phoenix.
FOREIGN POLICY・1 DAY AGO
Business Insider

The Republican lawmaker's bill is highly unlikely to advance given the Democratic-controlled House and Senate.
CONGRESS & COURTS・2 DAYS AGO