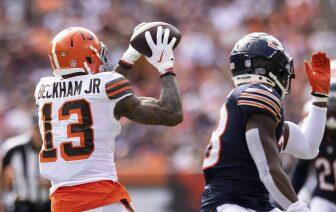 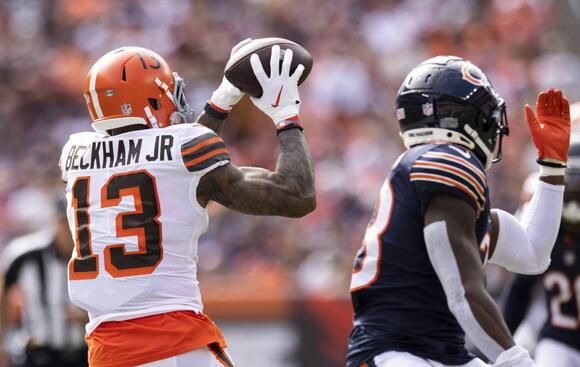 NFL Week 7 has arrived and it offers a ton of promise throughout the schedule. From epic primetime games to potential shootouts between star players, there is something for everyone from Thursday through Monday.

Expect it to be exciting immediately. We’re poised for a fantastic “Thursday Night Football Game” between two fun teams, but the action won’t stop there. Division battles between great teams could lead to an upset and we might have the highest-scoring NFL game of the 2021 season, too.

Let’s dive into our bold predictions for NFL Week 7.

Expectations for this Thursday Night Football matchup between the Denver Broncos and Cleveland Browns . After a 3-0 start, Denver enters on a three-game skid and one of the best defenses in the NFL suddenly looks nothing like it. Meanwhile, the Browns have lost two in a row and could be without Kareem Hunt and Nick Chubb.

Once a run-heavy team, Cleveland will turn to the run in this matchup. In the Broncos’ last three games, their secondary has allowed 888 passing yards with a 114.9 passer rating, 10.2 yards per attempt and a 5-0 TD-INT ratio. Baker Mayfield and Odell Beckham Jr. will take notice of that. 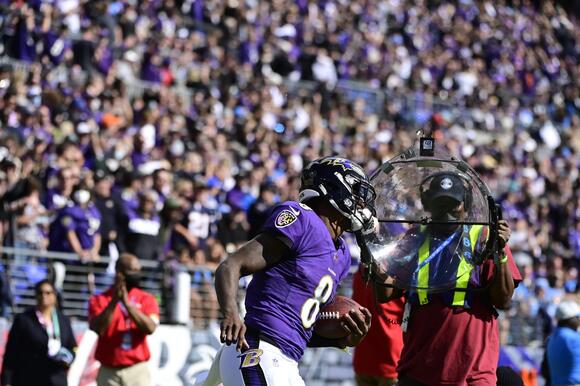 It’s been a few years since OBJ erupted for a huge game. While fans will remember his big 2020 performance against the Dallas Cowboys, he didn’t finish that day with 100 receiving yards. The last time he eclipsed 100 receiving yards, Oct. 13, 2019 against the Seattle Seahawks. Expect this wild drought to end in NFL Week 7.

Before this season, reigning NFL MVP Aaron Rodgers and Davante Adams facing off against the Washington Football Team defense seemed like a terrific chess match. Fast forward to NFL Week 7, it projects to be an entirely lopsided duel between elite players vs. a hapless group.

Opposing quarterbacks are averaging a 104.4 passer rating, 309.5 passing yards, and a 65.3% completion rate against Washington’s secondary. Patrick Mahomes just cooked Washington for 397 yards and two scores, in a game that included an interception off Tyreek Hill’s hands and another pick on a baffling mistake. 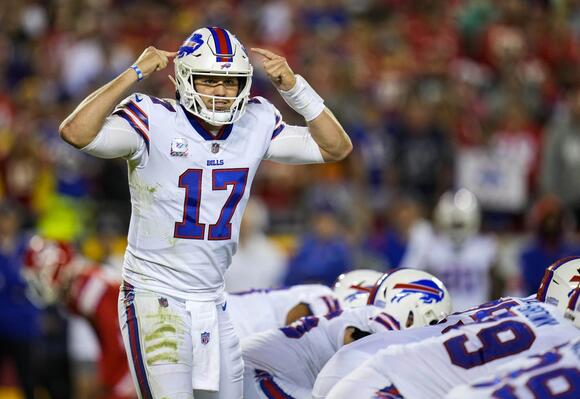 Even if the Green Bay Packers don’t get All-Pro left tackle David Bakhtiari back for this game, they should roll at Lambeau Field. Adams will cook William Jackson ( 92.3 passer rating allowed in coverage) , Randall Cobb scores a touchdown and Green Bay wins big.

Sunday’s AFC North clash between the Cincinnati Bengals and Baltimore Ravens is the must-see NFL Week 7 game. Lamar Jackson is playing at an MVP-caliber level and Baltimore’s defense is coming off a huge performance, but don’t sleep on a 4-2 Bengals team.

Entering as a 6.5-point underdog, there are ways Cincinnati can pull off the upset. Marlon Humphrey might shadow Ja’Marr Chase, but that still leaves Tee Higgins and Tyler Boyd in man coverage against Tavon Young (50.5 PFF grade in coverage) and Anthony Averett (27 receptions allowed, 14.6 yards per catch).

The Bengals have the talent to put up 24-plus points against Baltimore’s defense. So, it comes down to Cincinnati’s ability to stop the run. Allowing the eight-fewest yards per carry (3.9) and grading as Pro Football Focus’ sixth-best run defense , this won’t be a mismatch. Don’t be surprised if the Bengals win, taking first place in the division.

The relationship between Matthew Stafford and the Detroit Lions is in a good place. Detroit let him choose a trade to the Los Angeles Rams and he left the organization on good terms. Needless to say, Jared Goff doesn’t share those same warm feelings towards Sean McVay.

This will certainly be labeled as a revenge game. Giff wants to prove his former coach wrong and Stafford intends to show what would have happened if the Lions built a better team around him. It’s fair to say both these quarterbacks will have very different experiences on Sunday.

Playing at home, Stafford will carve up a Lions’ secondary allowing the highest average passer rating (113.8) and passing yards per game (9.8). While he throws touchdowns and racks up the yards, Goff will be facing a defense that knows all his bad habits and will be more than happy to prove their head coach was right.

If given the ability to flex NFL games, the Kansas City Chiefs vs Tennessee Titans duel would be moved to Sunday Night Football. When Kansas City controls the football, we’ll witness an offense with three All-Pro talents (Mahomes, Hill and Travis Kelce). After they score, a Titans’ offense with Derrick Henry, Julio Jones and A.J. Brown will take the field.

Good defenses have problems stopping the Titans and Colts. Fortunately for fantasy managers and fans who love highlights, Tennessee and Kansas City have two of the worst defenses in the NFL. The Chiefs allow the sixth-most rushing yards (133.2), fifth-most points (29.3) per game and opponents score on 48.3% of their drives. 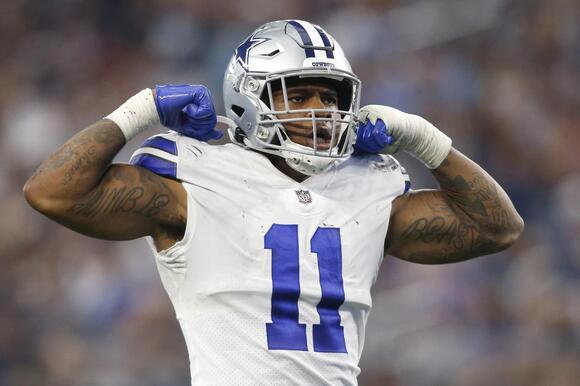 Also Read:
Top 2021 NFL Rookie of the Year candidates: Micah Parsons near top, with QBs nowhere to be found

As for Tennessee, this defense surrenders a 100.3 average passer rating, the fourth-highest yards per pass attempt (8.4) and are the fifth-most blitz-heavy team in the NFL. Against a quarterback with a 114.0 passer rating and 17-2 TD-INT ratio when blitzed, that won’t end well. This is going to be the shootout of NFL Week 7.

There was a time when the Ravens would have celebrated holding Le’Veon Bell to 48 yards on 11 carries. Not so long ago, he lived in their nightmares — those outside runs on which he’d wait and wait, then snap off a double-digit gain, or the pass routes on which he’d toy with some poor linebacker. As an All-Pro for the Pittsburgh Steelers, he played a starring role in some of the most painful ...
NFL・23 DAYS AGO
ClutchPoints

Seattle Seahawks head coach Pete Carroll has one of the hottest seats of any coach in the NFL. Not only is his team a disappointing 3-8 on the season following a rash of injuries that Seattle’s shallow roster failed to overcome, but he has also had a rocky relationship with his star quarterback, Russell Wilson.
NFL・3 DAYS AGO
ClutchPoints

The Baltimore Ravens didn’t make any notable trades last week, but it reportedly was not for a lack of effort. According to a report from NFL.com insider Ian Rapoport, the AFC North contenders made several notable inquiries, including one big one with an AFC East franchise. Rapoport reports that the...
NFL・26 DAYS AGO

Tony Romo was criticized on social media Sunday after seemingly defending Aaron Rodgers over the fallout from his vaccine status during CBS’ broadcast of the Green Bay Packers-Seattle Seahawks game. The former Dallas Cowboys quarterback applauded Rodgers for taking "responsibility" over "misleading" fans about his vaccine status when he told...
NFL・17 DAYS AGO
FanSided

It was an ugly game between the Seattle Seahawks and the Green Bay Packers. Neither team looked great, but Seattle completely fell apart in the closing minutes of the contest. DK Metcalf became so frustrated, he was ejected from the game for attempting to fight two Packers players, then tried sneaking back onto the field.
NFL・18 DAYS AGO
The Spun

Last Tuesday, the Tennessee Titans parted ways with veteran running back Adrian Peterson. A little over a week later, the future Hall of Famer is on a visit with the Seattle Seahawks. NFL Network insider Ian Rapoport was first to break the news that Peterson is visiting the Seahawks this...
NFL・1 DAY AGO

The Seattle Seahawks are technically still in the hunt for a playoff spot, but it feels as though this isn’t going to be one of those seasons where Russell Wilson, Pete Carroll, and company are going to make it past the last week of the regular season. A disjointed offense is largely to blame for the Seahawks’ offense, and they got reminded of that again in Week 11 when they lost to an Arizona Cardinals team that didn’t even have Kyler Murray and DeAndre Hopkins.
NFL・11 DAYS AGO
CBS Sports

December is here, a time for celebration and feeling good, so let's get the picks back on track. Make it a December to remember. Wait, I've heard that before. Anyway, the picks weren't great last week. I went 7-8 against the spread, 9-6 straight up and 3-3 with my Best Bets as part of the Pick Six Podcast.
NFL・2 DAYS AGO
ClutchPoints

Seattle Seahawks QB Russell Wilson didn’t have the best game in their Monday Night Football showdown with the Washington Football Team. Sure he had two touchdowns, but he also made some ill-advised decisions that cost them the game. Speaking to reporters after the contest, Wilson admitted that it’s not the...
NFL・3 DAYS AGO
The Baltimore Sun

Exactly a year ago, the Ravens’ offense was in a bad place. On Dec. 2, 2020, a unit crippled by the coronavirus — quarterback Lamar Jackson’s absence, especially — finished with 219 total yards in a Wednesday afternoon loss to the Pittsburgh Steelers. A week before that, a more representative Ravens attack had settled for field goal after field goal against a depleted Tennessee Titans defense ...
NFL・1 DAY AGO

The Seattle Seahawks sure could use some of that Monday night magic. The Seahawks, who have won 11 of their
NFL・3 DAYS AGO
Sports Illustrated

The 36-year-old running back was released by the Titans last week.
NFL・1 DAY AGO
FanSided

What will happen when the Arizona Cardinals travel to the pacific northwest for a Week 11 matchup against the Seattle Seahawks?. The Arizona Cardinals are coming off of a rough loss to the Carolina Panthers. But, you can place an asterisk beside it. Colt McCoy led the charge only to go down with a pectoral injury, which made way for Chris Streveler. DeAndre Hopkins did not play, nor did Chase Edmonds.
NFL・13 DAYS AGO
Sportsnaut

Running back Adrian Peterson visited with the Seattle Seahawks on Wednesday, NFL Network reported. The Tennessee Titans waived the 36-year-old
NFL・1 DAY AGO

Throughout the 2021 NFL season, NFL Network analysts will provide one bold prediction heading into each week's slate of games (see the full Week 12 schedule). Maurice Jones-Drew: Sunday's Bucs-Colts game features a pair of MVP candidates in Tom Brady and Jonathan Taylor. Who has the better game? Taylor, of course! (Like I'd go against a running back.) Indianapolis' second-year star gains more yards on the ground than Brady produces through the air, carrying the Colts to a huge win over the defending champs.
NFL・7 DAYS AGO
The Baltimore Sun

Ravens’ Week 15 game vs. Packers pushed back to late-afternoon kickoff

The Ravens’ Week 15 home game against the Green Bay Packers has been pushed back to a 4:25 p.m. kickoff, the NFL announced Tuesday. Fox’s telecast of the game had been scheduled to start at 1 p.m. on Dec. 19. The NFL uses “flexible scheduling” in Weeks 11-18, meaning that, after consultation with its broadcast partners, it can move games into prime-time or late-afternoon slots. The ...
NFL・2 DAYS AGO
Sportsnaut

Super Bowl 2022: The Tampa Bay Buccaneers are the reigning NFL champions, but who'll make the playoffs — and lift the Lombardi Trophy at the end of this season?
NFL・2 HOURS AGO
Sportsnaut