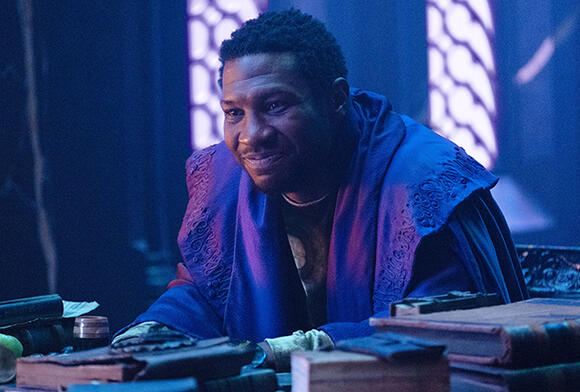 The latest wave of Marvel movie delays means there is a greater chance for Loki Season 2 to hit our screens before Jonathan Majors’ Kang the Conqueror makes his big-screen presence known in the third Ant-Man film.

Majors was long ago cast in Ant-Man and The Wasp: Quantumania , which until recently was due to be released on Feb. 17, 2023. But Marvel announced on Monday, along with several other delays, that the third Ant-Man film now won’t arrive until July 28, 2023. With Loki Season 2 expected to start production sometime in 2022 (though possibly not until 2023), it would seem that the trickster’s ongoing small-screen adventures could precede Kang’s the Conqueror’s movie debut.

Marvel of course has said nothing about the anticipated timetable for Loki Season 2, which was officially announced in July .

Majors appeared in Loki ‘s Season 1 finale as “He Who Remains,” an enigmatic man who told end-of-time Citadel visitors Loki and Sylvie (played by MCU vet Tom Hiddleston and Sophia Di Martino) that he has been known by “many names” including as a “conqueror.” He Who Remains spun a yarn about a variant of himself who, long, long ago, as a scientist from the 31st Century, discovered other universes stacked on top of our own. Alas, other variants of said scientist did same, a power struggle ensued, and…. yada yada yada … He Who Remains tamed and weaponized the trans-temporal entity known as Alioth to end that multiversal war. He then formed the TVA (Time Variance Authority) to maintain one timeline (and avoid others).

Though He Who Remains did not end up walking away from his encounter with Loki and Sylvie, the aftermath of that meeting was instantly felt in the finale’s very final scene — which thus promised that Loki Season 2, if not preceding MCU movies such as Doctor Strange in the Multiverse of Madness , will further explore the timeline-splintering ramifications.

Doctor Strange in the Multiverse of Madness is now set to premiere on May 6, 2022, marking another six-week delay — and there are (unconfirmed!) rumors that Loki, Sylvie and Owen Wilson’s Mobius all will appear in it.

Hawkeye Stages 'Rogers: The Musical' — Listen to the Full Cast Recording of That Broadway Showstopper

“I could do this all dayyyyyyy!” Following a harrowing cold open that actually revisited the Battle of New York, Disney+’s Hawkeye leaps forward to the MCU’s present-day Broadway, where Clint Barton (with his three kids) is enduring a performance of Rogers: The Musical. The fictional production is very… “hit show for all ages,” let’s politely say… loading the stage with mid-budget takes on the Avengers as a showstopper ahead of intermission recounts their defeat of Loki and the Chitauri. Clint (played by Jeremy Renner), we and daughter Lila realize, had his hearing aid dialed down, but was paying attention enough to note...
MOVIES・3 DAYS AGO
TVLine

Birds of Prey no longer flips the bird in a sanitized edit that was accidentally uploaded to HBO Max. As first noted by CBR.com and other sites, the R-rated Birds of Prey (and the Fantabulous Emancipation of One Harley Quinn) — which first landed on HBO Max in August 2020 — returned to the streamer after a brief absence this week with numerous, basic cable-friendly edits. Though listed on its main page as being the original “R” version, the DC movie opens with an advisory saying, “This film has been modified as follows from its original version: it has been edited for...
TV & VIDEOS・13 HOURS AGO
TVLine

Samuel “Screech” Powers’ former classmates gather at The Max to honor their late friend in the Season 2 premiere of Peacock’s Saved by the Bell revival. The memorial doubles as a tribute to legacy cast member Dustin Diamond, who died in February of lung cancer; he was 44 years old. Though Screech was not seen during Season 1 of the sequel series, he was mentioned during the big homecoming episode, when Slater alluded to Screech having relocated to the International Space Station with his robot companion Kevin. So how exactly does the revival acknowledge Diamond’s passing? Read on to find out… Wednesday’s opener...
TV & VIDEOS・3 DAYS AGO
Esquire

Marvel's Moon Knight Looks To Be Marvel's Darkest Outing Yet

It's OK. You can say it. Disney+ day—which promised to give us a boatload of announcements and teasers for its upcoming project—was a little bit of a bummer. Most of the event merely reminded us of the bazillion superhero TV shows the Mouse House has in the works rather than revealing much of anything new. The whole shindig was capped off by fleeting first looks of Ms. Marvel, She-Hulk, and Moon Knight, which got the most airtime.
TV SHOWS・12 DAYS AGO

Marvel Studios' newest live-action offering Hawkeye is already making waves on Disney+ and with two episodes released, it's already safe to say that the Marvel Cinematic Universe has knocked another one out of the park. However, some dirty laundry between Marvel Studios and a comic book artist is being revealed and it's already making quite an impact amongst fans, influencing some of them to boycott the Jeremy Renner and Hailee Steinfeld series.
TV SERIES・2 DAYS AGO
ComicBook

Spider-Man: No Way Home Plot Was Changed After Another Marvel Movie Delayed Release

There was once a timeline when Spider-Man: No Way Home was going to come after the events of Doctor Strange in the Multiverse of Madness, where the Sorcerer Supreme (Benedict Cumberbatch) went on a mind-bending trip through the multiverse. Because of the COVID-19 pandemic, the Doctor Strange follow-up was delayed (more than once), forcing the filmmakers to alter No Way Home significantly. In fact, Spider-Man star Tom Holland says there were substantial script rewrites being done to the movie long after principal photography had even started.
MOVIES・10 DAYS AGO
WIBX 950

Marvel’s big contribution to Disney+ Day was a 15-minute “special” that included clips of some of the series that have premiered on the streaming service so far — including WandaVision, The Falcon and the Winter Soldier, and Loki — and clips from their upcoming slate. There was an extended clip from Hawkeye, which premieres in just a few weeks, and the first footage of maybe the most exciting Marvel Disney+ series to date: Moon Knight starring Oscar Isaac.
TV & VIDEOS・14 DAYS AGO
The Guardian

More is less? What it’s like to watch an Imax movie at home

Disney+ has added enhanced Imax versions of a selection of Marvel adventures but does it make a shred of difference?
MOVIES・12 DAYS AGO

Iron Man 3 is a Christmas movie according to Marvel Studios head Kevin Feige. During a press conference for Hawkeye on Disney+, the executive was joking around with the cast about the setting of the series. When someone said that it was the big Christmas entry in the MCU, Brandon Davis joked that Iron Man 3 existed. it seems as though Feige enjoyed that nod and contrasted the two projects for a minute. The Tony Stark feature centered around the Holidays plot-wise, but the film was released in the middle of the summer. Iron Man 3 is one of those Marvel movies that invite a ton of debate because of how it deviates from some of the previous entries. Shane Black's take on Robert Downey Jr.'s journey through the series differs a bit from Iron Man 1 and 2. It would be hard not to mention The Avengers occurring before the third installment as well. In that way, the movie is very similar to Hawkeye, which will deal with some of the fallout from The Snap and how the Marvel universe moves forward.
MOVIES・11 DAYS AGO
newsradioklbj.com

Take a look at the new trailer for Marvel’s ‘Spider-Man: No Way Home’

Spider-Man faces multiple villains who have arrived from different universes in the latest trailer for Sony and Marvel’s Spider-Man: No Way Home. In the trailer (seen here), Doctor Strange (Benedict Cumberbatch) explains to Spider-Man (Tom Holland) that visitors from other universes are arriving due to him botching a spell that would have made Peter Parker’s secret identity secret once again.
MOVIES・9 DAYS AGO
Inverse

Here’s the surprising Marvel movie you to watch before

At long last, Clint Barton is the hero of his own story in the Marvel Cinematic Universe. Jeremy Renner’s master archer is set to make his first screen appearance since 2019’s Avengers: Endgame in Hawkeye, Marvel’s upcoming six-episode Disney+ series. The new series will see him team up with Kate Bishop (Hailee Steinfeld), a skilled archer and aspiring superhero, to take down bad guys in red tracksuits and clean up messes he made during his days as the murderous vigilante Ronin.
MOVIES・7 DAYS AGO
thewoodword.org

Popcorn Picks: Marvel’s “Eternals” proves to be nothing like any movie the MCU has ever seen.

Marvel’s “Eternals” premiered on November 5, and it is unlike any other Marvel Cinematic Universe (MCU) movie I have ever seen. This film offered a completely new look and style to the traditional superhero movie. The cast of this movie was the most diverse the MCU has ever had and...
MOVIES・6 DAYS AGO

What Is It Like to Write a Movie for Marvel?

A stunning concept design for the second season of Tom Hiddleston’s Loki imagines Jonathan Majors as Kang the Conqueror. The season finale of the Disney Plus original series Loki gave us an exciting glimpse at the future of the Marvel Cinematic Universe. The episode saw Loki (Tom Hiddleston) and Sylvie (Sophia Di Martino) encountering the eccentric He Who Remains (Jonathan Majors), who reveals that he has several horrific variants, including the Marvel comic book icon Kang the Conqueror.
TV SERIES・5 DAYS AGO