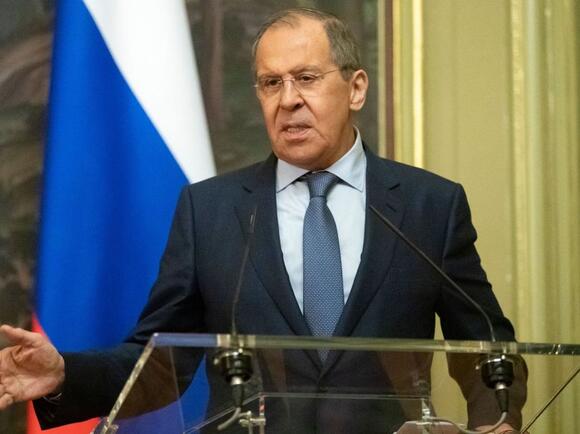 Russia's top diplomat on Monday announced that Moscow is suspending its mission to NATO in Brussels, a response to the alliance kicking out eight Russians it accused of secretly working as spies earlier this month.

"As a result of NATO's deliberate moves, we have practically no conditions for elementary diplomatic work and in response to NATO's actions we suspend the work of our permanent mission to NATO, including the work of the chief military envoy, probably from Nov. 1. Or it may take several more days," Russian Foreign Minister Sergey Lavrov said, per the TASS news agency .

NATO is not interested in "equal dialogue nor in any joint work," Lavrov said.

"We have taken note of Minister Lavrov's comments to the media, however we have not received any official communication on the issues he raised," NATO spokesperson Oana Lungescu said in a statement provided to Insider.

This announcement from Russia came as Defense Secretary Lloyd Austin set off on European trip, including visits to Georgia, Ukraine, and Romania.

Austin is "traveling to Europe to reassure allies and partners of America's commitment to their sovereignty in the face of Russian aggression," the Pentagon said in a statement . The Pentagon chief is also set to attend a NATO defense ministerial meeting in Brussels at the end of the trip

Russian forces invaded Georgia during a brief war in 2008 and continue to occupy two disputed territories in the region: South Ossetia and Abkhazia. A majority of the international community recognizes these territories as part of Georgia.

Ukraine is engaged in an ongoing war with Kremlin-backed separatists in the eastern Donbass region. The Ukraine conflict began in 2014, the same year that Putin unilaterally annexed Crimea. Earlier this year, Russia prompted fears of an invasion as it amassed tens of thousands of troops along the Ukrainian border. The troops were ultimately withdrawn.

Russian President Vladimir Putin threatened a Russian retaliation if the U.S. or NATO allies cross a “red line” by reinforcing Ukraine by sending certain weapons, such as hypersonic weapons, cruise missiles and missile defense systems, to which he said Russia will match. “If some kind of strike systems appear on...
MILITARY・1 DAY AGO
Reuters

MOSCOW, Dec 1 (Reuters) - Russia accused Ukraine on Wednesday of deploying half of its army or 125,000 troops to Donbass, a conflict zone in eastern Ukraine, where government forces have been battling Russia-backed separatists since 2014. The accusation was levelled by Russian foreign ministry spokeswoman Maria Zakharova during a...
POLITICS・18 HOURS AGO
The Guardian

The US says it has evidence Russia has made plans for a “large scale” attack on Ukraine and that Nato allies are “prepared to impose severe costs” on Moscow if it attempts an invasion. Speaking at a Nato ministers meeting in Latvia, the US secretary of state, Antony Blinken, said...
POLITICS・9 HOURS AGO
Newsweek

The Kremlin said the move is a response to a U.S. announcement that 27 Russian diplomats and their families would have to leave by January 30.
POLITICS・11 HOURS AGO

NATO on guard against Chinese, Russian missiles that can hit allies

LONDON, Dec 1 (Reuters) - NATO Secretary-General Jens Stoltenberg said on Wednesday that the Western alliance was working closely to protect allies against new Chinese and Russian missiles that can reach Europe and North America. "Russia, but also China, now invest heavily in nuclear-capable systems that can reach all NATO...
MILITARY・12 HOURS AGO
AOL Corp

MOSCOW (Reuters) - Russia said on Wednesday it was ordering U.S. embassy staff who have been in Moscow for more than three years to fly home by Jan. 31, a retaliatory move for what Moscow said was a U.S. decision to limit the terms of Russian diplomats. The step, the...
U.S. POLITICS・16 HOURS AGO
US News and World Report

RIGA (Reuters) - NATO has a range of options should Russia use force against Ukraine, including economic, financial and political measures, the secretary-general of the Western defence alliance said on Wednesday. "We have a wide range of options to make sure that Russia will be confronted with serious consequences if...
POLITICS・13 HOURS AGO

NATO debates the lessons of mission creep in Afghanistan

RIGA, Latvia (AP) — Barely 3 months after the chaotic U.S.-run troop evacuation from Afghanistan, NATO foreign ministers met Wednesday to debate a rapidly compiled report on the lessons to be learned from the military organization’s 18-year security presence in the conflict-ravaged country. NATO took over the International Security Assistance...
WORLD・18 HOURS AGO
Washington Post

Why the CIA is so worried about Russia and Ukraine

The CIA discovered something scary in October: Russia was moving troops toward the Ukrainian border — and, unlike in previous border thrusts, was making secret plans about how to use them. The agency also worried that the potential conflict zone didn’t appear to be just the eastern sliver of Ukraine...
FOREIGN POLICY・1 DAY AGO
The Independent

President Vladimir Putin said Wednesday that Moscow would seek Western guarantees that would preclude any further NATO expansion and deployment of its weapons near Russia s borders.Putin’s statement came amid Ukrainian and Western worries about an alleged plan by Moscow to invade Ukraine. Russian diplomats countered them Wednesday by expressing concern about Ukraine’s military buildup near the area of the separatist conflict in the country’s east.Speaking at a Kremlin ceremony where he received credentials from foreign ambassadors, Putin emphasized Russia will seek “strong, reliable and long-term guarantees of its security.”“In a dialogue with the United States and its allies...
POLITICS・14 HOURS AGO
San Diego Union-Tribune

Russia has 'no right' to demand Ukraine be excluded from Nato, says alliance chief

Russia has “no right” to demand Ukraine be permanently excluded from Nato, the head of the alliance said on Wednesday, as President Vladimir Putin suggested he would insist on such a move as a guarantee of peace. The comments by Jens Stoltenberg, the Nato secretary general, came as Nato foreign...
POLITICS・9 HOURS AGO
Business Insider

Putin warned NATO that deploying troops or advanced missiles to Ukraine would cross a "red line." The Russian leader said Moscow would be forced to take action while boasting about Russia's hypersonic missiles. Hypersonic missiles are designed to be virtually unstoppable, and can fly at least five times the speed...
POLITICS・1 DAY AGO
AFP

US warns Russia of 'high-impact' sanctions if it invades Ukraine

US Secretary of State Antony Blinken said Wednesday that Washington had seen "evidence" Russia could be planning an invasion on Ukraine, threatening Moscow with painful economic sanctions if it attacks. Russian President Vladimir Putin, for his part, said he wanted "concrete agreements" from NATO that it would not expand eastwards. Blinken accused Moscow of massing "tens of thousands of additional combat forces" near Ukraine's border as he geared up for talks with his Russian counterpart Sergei Lavrov in Stockholm over the crisis. "We're deeply concerned by evidence that Russia has made plans for significant aggressive moves against Ukraine, plans include efforts to destabilise Ukraine from within as well as large scale military operations," Blinken said after a meeting of NATO foreign ministers in Latvia's capital Riga.
FOREIGN POLICY・7 HOURS AGO
The Independent

The UK’s foreign secretary Liz Truss has warned Russian president Vladimir Putin against making a “strategic mistake” by launching an invasion of Ukraine.The senior minister accused Moscow of “malign activity” in the Balkans, as Nato allies gathered in Latvia to consider how to respond to Russia’s military build-up near the Ukrainian border.Suggesting the Kremlin was stirring up tensions, Ms Truss said: “We will support Ukraine and stability in the western Balkans … we will stand with our fellow democracies against Russia’s malign activity.”The foreign secretary also warned: “Any action by Russia to undermine the freedom and democracy that our partners enjoy...
POLITICS・1 DAY AGO

Latvia's prime minister on Wednesday accused Russia of seeking to destabilise and split Europe with a series of actions including its latest build-up of troops on the border with Ukraine. In an interview with Agence France-Presse, Prime Minister Krisjanis Karins described the build-up as "disturbing" and said it was the latest in a series of interconnected actions by the Kremlin including limits on gas supply, its buttressing of the regime in Belarus and disinformation.
POLITICS・7 HOURS AGO
The Independent

Blinken says Russia could move on Ukraine 'on short order'

U.S. Secretary of State Antony Blinken warned Wednesday that President Vladimir Putin could quickly order an invasion of Ukraine if he had a pretext for doing so but that NATO allies stand ready to inflict heavy sanctions on Russia’s economy if that happens.Tensions over a Russian troop buildup along the border of Ukraine have been a focus of Blinken’s weeklong Europe trip and topped the agenda of his meeting Wednesday with NATO counterparts in Latvia. The Ukrainian government is seeking to align with NATO and the West. “We don’t know whether President Putin has made the decision to invade....
U.S. POLITICS・10 HOURS AGO
Business Insider

Secretary of State Antony Blinken warned that Russia is trying to "destabilize Ukraine from within." Russia has amassed thousands of troops along Ukraine's border, prompting fears of an invasion. Blinken said it's unclear if Putin will invade, but Russia could do so in "short order" if it wants to. US...
FOREIGN POLICY・8 HOURS AGO
Reuters

MOSCOW, Nov 30 (Reuters) - Russian Foreign Minister Sergei Lavrov accused NATO on Tuesday of deploying a significant amount of military hardware near Russia's borders and said Moscow could respond to security threats from Western countries and Ukraine if necessary. U.S., NATO and Ukrainian officials have raised the alarm in...
MILITARY・1 DAY AGO