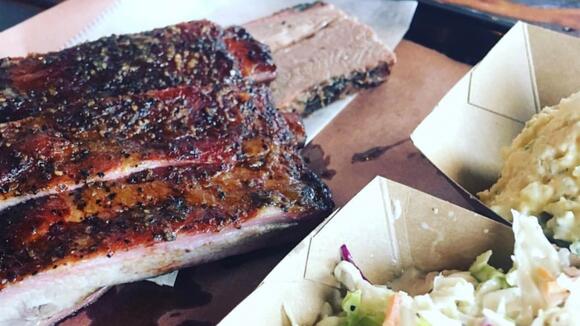 AUSTIN– After Texas Monthly traveled to Lubbock as part of its “BBQ Fest: Road Trip Edition” last week, two West Texas barbecue joints made the cut for the “Top 50 Barbecue Joints List,” according to an article by the Austin publication.

The Wolfforth BBQ restaurant opened in 2015, owned by Arnis and Mallory Robbins, the article said. Pitmasters who make the BBQ are Emma Mendoza, Nathan Pier, Arnis Robbins and Joseph Rodriguez.

Before turning to the culinary arts, Arnis and Mallory Robbins ran a landscaping company in Arizona, the article said. But they eventually went from cutting grass to cutting “some of the best meat in the state” when their food truck opened outside Lubbock in 2015.

According to the article, Evie Mae’s serves a more limited menu with longer hours at its newest location inside United Supermarkets on 114th Street and Slide Road in Wolfforth.

The restaurant is open from 11:00 a.m. until it is sold out, Wednesday through Saturday.

The second West Texas BBQ joint to make the top 50 list was Rejino Barbeque in Olton. Rejino was ranked No. 17 on the list, the article said.

Texas Monthly said by the time its crew arrived at Rejino, the owners were wrapping up for the day. However, crews managed to get brisket “with a perfect bark, juicy smoked chicken and a bounty of well-crafted sides.”

To see which other Texas BBQ joints made the top 50 list, click HERE to read the full article.

Small Business Saturday a success for one Lubbock shop

LUBBOCK, Texas — Piper, a local clothing store, celebrated Small Business Saturday to help highlight small businesses. In the Hub City, shopping local is a big deal for local stores, especially during Small Business Saturday. “I think it kicks off the Christmas giving time and people get excited and they start thinking about all the […]
LUBBOCK, TX・1 DAY AGO
KAMC KLBK EverythingLubbock.com

Why did Jennifer Read release video of the deadly shooting Nov. 5 in South Lubbock? She explains to GMA

LUBBOCK, Texas — Jennifer Read, the widow of Chad Read, granted an interview recently to Good Morning America – her first interview outside of law enforcement since the deadly shooting of Chad on November 5. Police have not officially named the shooter, but family court records and a lawsuit named William “Kyle” Carruth as the […]
LUBBOCK, TX・18 HOURS AGO
KAMC KLBK EverythingLubbock.com

Lubbock courts still behind amid the pandemic

LUBBOCK, Texas — Over one year ago, COVID-19 took a toll on all court cases as the courts took measures to keep individuals safe. Amid the pandemic, last year’s hearings were moved to zoom, and jury trials were postponed. Judge William Eichman II of the 364th district court said they had business to do and […]
LUBBOCK, TX・16 HOURS AGO
KAMC KLBK EverythingLubbock.com

LUBBOCK, Texas– Following his announcement on running for Texas governor, Beto O’Rourke scheduled a meet and greet opportunity in Lubbock to hear more about why he has decided to run, according to a social media post. The “Lubbock Meet and Greet with Beto” is scheduled for noon, December 14. The location for the meet was […]
LUBBOCK, TX・1 DAY AGO

EL PASO, Texas (KTSM) – A security guard died while trying to protect a television news crew that was covering a smash and grab looting event in California. In response to the accident, Gov. Greg Abbott promised to keep Texans safe. According to police, the security guard, Kevin Nishita, was shot in the stomach while […]
TEXAS STATE・2 DAYS AGO
KAMC KLBK EverythingLubbock.com

LUBBOCK, Texas– Light Up Lubbock, a non profit organization, hosts its first-ever year in the Hub City. Light Up Lubbock provides family fun opportunities to look at Christmas lights, get hot chocolate and see Santa. “Light up Lubbock is centered around the whole experience with your family and creating memories at Christmas time, because it […]
LUBBOCK, TX・5 DAYS AGO
KAMC KLBK EverythingLubbock.com

LUBBOCK, Texas– The Grand Marshall for the 16th annual Miracles Christmas Parade will be new Texas Tech Head Football Coach Joey McGuire, according to a Miracles news release. McGuire will take over as the head coach of Tech football duties in January, but he said he wanted to make the Miracles parade one of his […]
LUBBOCK, TX・8 DAYS AGO
KAMC KLBK EverythingLubbock.com