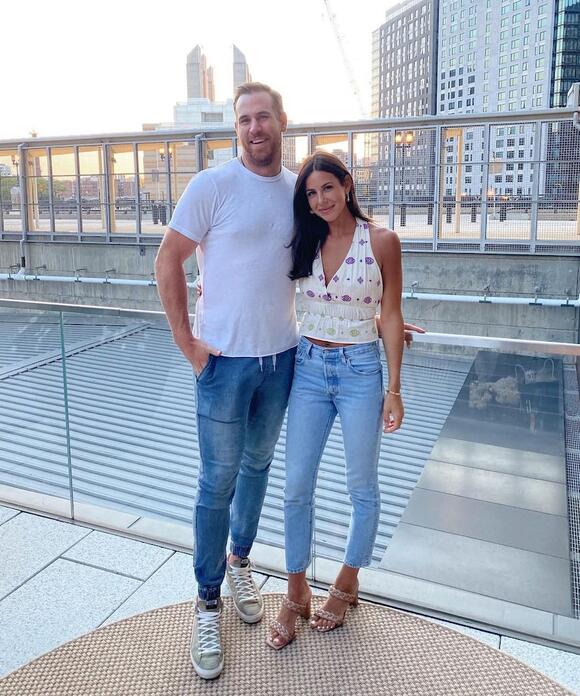 Jimmy Hayes died in August at just 31 years old, and now the NHL player’s cause of death has been revealed.

His widow Kristen and father Kevin Sr. spoke to The Boston Globe, explaining that his death has been ruled accidental after fentanyl and cocaine were found in his system.

The athlete passed away just one day after celebrating his son Beau’s second birthday. Jimmy, Kristen and friends shared photos and videos on Instagram Stories from the festivities. The couple had also welcomed son Mac three months earlier.

Kristen received Jimmy’s toxicology report on Friday from the Massachusetts state medical examiner. She told The Globe, “I was completely shocked. I was so certain that it had nothing to do with drugs. I really thought it was a heart attack or anything that wasn't that [drugs].”

Kevin Sr. said he saw signs, explaining, "I'm an addict myself. I'm sober a long, long time, but I know how powerful this stuff is. I was in shock when it happened, but then I started putting stuff together in my head," saying Jimmy "made a terrible mistake and it cost him his life."

He went on, "About maybe 16 or 17 months ago, I saw a little change in Jimmy's behavior and I went to him and I said, 'I think there might be a problem here with pills.' He had had an injury for a while and I think he started taking the painkillers and they get you."

Kevin Sr. says Jimmy told him: "Dad, I'm hooked on these pills. I got injured and I started taking them and I never got off."

Kristen said of her late husband, "I know he would give anything to still be here with us today. I am heartbroken and devastated, but I will choose to remember my husband and the boys' dad by all the joy and love he brought us, and I hope everyone else does, too.''

Jimmy was first drafted to the NHL in 2008, and debuted with the league in 2011 with the Chicago Blackhawks. His other teams over the years included the Florida Panthers, New Jersey Devils, Boston Bruins and Pittsburgh Penguins.

After leaving hockey in 2019, Hayes went on to co-host the podcast “Missin Curfew,” with former pros Shane O'Brien and Scottie Upshall.

When you mix cocaine with fentanyl and you die, remember that it's an accident because you should have taken them on separate occasions to avoid the accident.

Still hurting. Jimmy Hayes’ death has been challenging for his family to grapple with — especially for his wife, Kristen Hayes. While she was answering fan questions on Tuesday, November 30, one Instagram follower sent condolences to Kristen, noting that “grief is a crazy ride.” In her reply, the hockey athlete’s widow shared how she’s been coping.
NHL・5 DAYS AGO
People

Just over three months after his death, Kristen Hayes is celebrating her first Thanksgiving without her husband, hockey player Jimmy Hayes. Jimmy, who played for the Boston Bruins, among other NHL teams, was pronounced dead by first responders at his Milton, Massachusetts, home on Aug. 23. The evening prior to his death, Hayes and Kristen celebrated their son Beau's second birthday with their son Mac, who was born on May 5.
MILTON, MA・11 DAYS AGO
CBS Boston

BOSTON (CBS) — Bruins winger Brad Marchand was dominant on Sunday night against the Canucks, scoring a game-tying goal and registering a primary assist on the go-ahead goal, both of which came in the third period of Boston’s 3-2 win. This development no doubt irked many Canucks viewers back in Vancouver, as Marchand has never been the most celebrated player in British Columbia, dating back to his and the Bruins’ Stanley Cup win over the Canucks in 2011. Capping off some chaos. Marchy's tying goal on the power play is tonight's @JagermeisterUSA Shot of the Game!@Bmarch63 | #NHLBruins pic.twitter.com/8mpV8cDTtO — Boston Bruins (@NHLBruins) November...
NHL・8 DAYS AGO
Sportsnaut

This latest edition of the NHL Stat Corner covers the past two days (Friday/Saturday) since the NHL took a one-day break for American Thanksgiving. Scoring highlights this entry with lots more player and team stats and milestones from around the NHL. Ovechkin Goals Fuel the Capitals. Alex Ovechkin is tied...
NHL・8 DAYS AGO
Pro Hockey Rumors

The Department of Player Safety is working this holiday, as they’ve issued a pair of fines for actions in last night’s Winnipeg Jets-Columbus Blue Jackets game. Max Domi has been fined $5,000 for unsportsmanlike conduct, while Josh Morrissey has earned a $5,000 fine for slashing. Both are the maximum allowable under the CBA.
NHL・11 DAYS AGO
Yardbarker

Capitals’ Backstrom Is Most Underrated Player in the NHL

When conversing with non-hockey fans about hockey, the same few names always come up in conversation. Sidney Crosby , Connor McDavid, and Alex Ovechkin are the names that non-hockey fans usually associate with because these future hall of fame players dominate a majority of NHL publicity in their respected cities, including national advertising space across North America, because eh, why not promote the best?
NHL・13 DAYS AGO
markerzone.com

While the NHL chose to impose restrictions on players who refused to get their COVID-19 vaccinations, the league is being much more relaxed when it comes to recommended booster shots of the vaccine. "NHL sent a COVID-19 letter to all clubs acknowledging vaccination booster shots remain a players choice," said...
NHL・13 DAYS AGO

Alain Vigneault’s quote sums up everything wrong with spiraling Flyers

Alain Vigneault started his postgame media availability with an interesting quote following the Flyers’ 7-1 loss to the Lightning on Sunday night. It was the team’s eighth-straight loss and they’re starting loss No. 9 in the face with the Avalanche on the docket tonight. “That’s a good question,” AV said...
NHL・1 DAY AGO
Sportsnet.ca

The same goes for a bounce back. It takes strength and resiliency to dust yourself off after a down season (whether injury-induced or just plain old off-pace play) and regain old form. Many of the players highlighted in this week's power rankings are doing exactly that. Let's dig in. 1....
NHL・4 DAYS AGO
Yardbarker

The Arizona Coyotes will not be headed to Houston or Quebec City, the team said in an emphatic statement released Thursday, shortly after a report said relocation could be coming soon for the franchise. "This is false. Totally false. We're not selling. We're not moving. The Coyotes are 100 percent...
NHL・4 DAYS AGO

The NHL’s inconsistency when it comes to penalizing slew-foots continues, as Devils defenseman P.K. Subban committed his fourth of the season Friday night and apparently won’t face any supplemental discipline for it.
NHL・2 DAYS AGO
FanSided

The Dallas Stars were able to conquer the backend of a back to back game situation and win 3-2 against the Arizona Coyotes. This was the fourth win in a row for Dallas which is one of their longest winning streaks this season. Heres how the Stars did without Jake Oettinger between the pipes tonight.
NHL・9 DAYS AGO
Sportsnaut

Last week, news broke that the Arizona Coyotes may be in search of a new home–yet again. While the team
NHL・23 HOURS AGO
NHL

Less than three months away from the 2022 Navy Federal Credit Union NHL Stadium Series outdoor game between the Nashville Predators and Tampa Bay Lightning, the Preds have unveiled their new jersey to wear when they take to the ice at Nissan Stadium. The first-ever outdoor NHL contest in Nashville...
NHL・4 DAYS AGO

No charges filed after death of Columbus NHL goaltender

COLUMBUS — Oakland County Prosecutor’s Office has ruled Columbus Blue Jacket’s goalie, Matiss Kivlenieks death as accidental. The prosecutor’s office in Michigan says they will not be pursuing charges in relation to the goalie’s death. According to our news partners at WBNS-TV, Kivlenieks died after a “tragic accident” on the...
NHL・5 DAYS AGO
Sportsnaut

We’re starting to get an idea of who some of the teams are that might be interested in Boston Bruins forward Jake DeBrusk now that his trade request has gone public.
NHL・5 DAYS AGO