Garic: Ed Orgeron is out at LSU for one big reason, he just couldn't say no 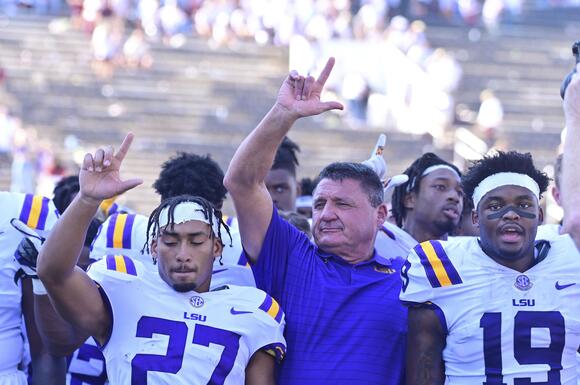 LSU Athletic Director Scott Woodward arrived at the point he and many Tigers fans already knew was coming. This football season is going to end in disaster. Sure, the Tigers just pulled off a big upset of Florida, little did we know it was in spite of Coach O not because of Coach O. That's wild to think about.

The midseason announcement that LSU and Coach O have agreed to mutually part ways is a concession that the season is not salvageable. Woodward is admitting the 2021 season is all but over. Coach O will remain as the coach until the end of the season. Orgeron went from interim head coach at LSU 5 years ago and will end that run, again, as the interim. Just, wow.

It's a rise and fall of epic proportions. Twenty one months ago Coach O led LSU to a perfect season culminating in a College Football Playoff win over Clemson. Less than 2 years later the program is back on the hunt for a new head football coach. Coach O went from the top dog in college football to a dog with his tail between his legs. How did we get here?

I can only guess as to what might have happened. Human nature could answer a lot. Success is hard to manage. Power is even harder. When we have success and we also get some air of invincibility to us. Your decision-making becomes clouded. Everyone tells you how much they love you and how great you are. You start to believe all your own hype. Your legend grows and so does your ego and power. You start to partake in things that come with success. You believe that you can do it again and again.

Everyone wants a piece of a successful person. You get surrounded with opportunities that might not be in your best interest, you get pulled in so many different directions and it's hard to say no to those requests and demands. The bottom line is Coach O didn't have a person next to him to say "no" for him. When you are the top dog you have to be able to say no to certain things. Ed didn't want to be the bad guy and say no himself.

Pick your choice of long-term sustained successful people in the world. They all have a "no" person with them at all times. Someone to run interference. Coach O's demise is centered around the fact that too many were afraid to challenge him and not enough people to tell others no.

No matter what, he remains a title-winning Coach at the highest level. That fact can never be taken away.

My hope for Coach O now? That he's learned to say no.

Every time LSU has had any success teams and people around the country steal the coaches and players from LSU! When Coach O lost his offensive coordinator to the Panthers it was just a matter of time! The school has to share blame for his demise because if they would have made legitimate offers to these people maybe O wouldn't have failed! The school can keep passing the buck but they are absolutely responsible for his failure!

well there is truth to the fact that you should at least surround yourself with someone close to keep you in check because success can really go to your head and make you do things you wouldn't normally do.

Where is Ed Orgeron going now he’s left LSU? What the former Tigers head coach has said, and potential coaching jobs explored. Back in October, Ed Orgeron and LSU agreed that he would step aside after the season was done. The initial announcement came after the Tigers upset No. 20 Florida, and it was revealed LSU would pay Orgeron the remaining $16.95 million on his contract.
NFL・5 DAYS AGO
USA TODAY

Ed Orgeron will not coach LSU in bowl game: 'I’m packing to go to Destin'

Ed Orgeron and the LSU administration have already agreed to part ways, so the he's heading to the beach rather than coach any bowl game.
COLLEGE SPORTS・10 DAYS AGO
neworleanssun.com

Ed Orgeron will coach final home game with LSU vs. No. 15 Texas AM

Ed Orgeron's last home game as LSU's head coach will be against No. 15 Texas AM on Saturday. It also will be his final game overall unless the Tigers (5-6, 2-5 SEC) win and receive a bowl bid. "I don't think it's going to hit me until the end, and...
TEXAS STATE・12 DAYS AGO
The Daily Advertiser

Ed Orgeron never had a bad day as LSU's football coach. Saturday could be his last.

When Ed Orgeron agreed to step down as LSU’s football coach in October, he was adamant about staying with the Tigers through a potential bowl game. That possibility has become less certain over the past month. Orgeron would like to stick around, but LSU President William Tate IV and athletics...
COLLEGE SPORTS・12 DAYS AGO

LSU head coach Ed Orgeron made a special announcement following his team’s stunning come from behind 27-24 victory against Texas A&M on Saturday night. He told reporters after Saturday night’s game that it would be his last game with the school. Offensive line coach Brad Davis will be the interim head coach for LSU for their bowl game.
10 DAYS AGO
On3.com

Ed Orgeron: LSU linebacker has developed into an NFL prospect

In his six years at LSU at Orgeron has seen a lot of NFL talent enter and exit his program, and he sees plenty of NFL-caliber players on his team right now. One of which is senior linebacker Micah Baskerville, and on Monday, the Tigers head man spoke on the maturation of his linebacker.
NFL・14 DAYS AGO
saturdaydownsouth.com

Ed Orgeron's final game a celebration of LSU at its best

This LSU season has been Ed Orgeron’s last one as head coach because it showed how far the program has slipped during the past 2 seasons. But the regular-season finale against Texas A&M on Saturday night in Tiger Stadium was something very different. The Tigers’ dramatic 27-24, last-minute victory against...
COLLEGE SPORTS・10 DAYS AGO
saturdaydownsouth.com

Ed Orgeron is going out a winner at LSU. The 2019 national championship-winning coach watched as his team scored in the final minute of Saturday night’s game to upset No. 15 Texas A&M 27-24. And, with that win, Coach O will ride off into the sunset. Even though the Tigers...
COLLEGE SPORTS・10 DAYS AGO

Ed Orgeron commended his LSU Tigers for their effort Saturday, which resulted in an upset win over Texas A&M to clinch bowl eligibility. They left it on the field, Orgeron said, which allowed him to leave LSU a winner. “We just kept on fighting and the guys kept on practicing,”...
COLLEGE SPORTS・9 DAYS AGO
AL.com

LSU knocked off 15th-ranked Texas A&M 27-24 in Baton Rouge on Saturday night in what turned out to be coach Ed Orgeron’s final game. The Tigers improved to 6-6 overall (3-5 in the SEC) with the win and are now bowl-eligible, but Orgeron said afterward he’s done as head coach. Offensive line coach Brad Davis will serve as interim coach for LSU’s bowl game.
COLLEGE SPORTS・10 DAYS AGO
On3.com

Ed Orgeron reflects on LSU career: 'We did what we were supposed to'

Ed Orgeron’s meteoric rise to stardom at LSU can be matched only by his spectacular collapse, as the Tigers’ head coach has worked his last game in Baton Rouge — just two years after winning the national title. Orgeron in 2019 went 15-0, putting together one of the greatest single-season...
COLLEGE SPORTS・10 DAYS AGO

Ed Orgeron won't coach LSU in bowl game: 'I wish them all the luck in the world'

The Ed Orgeron era at LSU is over. Orgeron, whose firing was announced in mid-October, has coached his final game for the Tigers, a 27-24 win over Jimbo Fisher and No. 15 Texas A&M in College Station. He announced after the game that he will not lead the Tigers (6-6) in their bowl game, instead heading to Destin, Fla., with his girlfriend.
COLLEGE STATION, TX・10 DAYS AGO
AL.com

A prominent college football beat writer is reporting tonight that LSU has found its replacement for Ed Orgeron. Pete Thamel with Yahoo Sports is reporting that the Tigers are set to hire Brian Kelly from Notre Dame – a move that Thamel said could be formally announced as soon as tomorrow.
COLLEGE SPORTS・8 DAYS AGO
WWL-AMFM

It was a movie we’ve all seen before. LSU led the first three quarters and entered but needed to mount a comeback in the final moments. But this time, they did just that. Here are three quick takeaways from the regular season finale.
COLLEGE SPORTS・10 DAYS AGO

BATON ROUGE, La. — When Texas A&M defensive end Micheal Clemons collected the last of his 3½ sacks late Saturday night, he figured the Aggies finally would celebrate a win at LSU as an SEC member. “I was hoping so,” a dismayed Clemons said, drawing out his words. “I was...
BATON ROUGE, LA・10 DAYS AGO
USA TODAY Sports Media Group

The magic has not run out for the LSU Tigers and Ed Orgeron. Facing a four-point deficit with under two minutes remaining in the game, Max Johnson engineered the comeback. After taking multiple sacks on the night, he found a way. The team faced a second and five from their own 20 when the lefty was sacked and the Tigers had a third and 11. It came down to a fourth and six when the offense really got rolling.
COLLEGE SPORTS・10 DAYS AGO
Gonzales Weekly Citizen

College football: LSU sends Orgeron out with a win