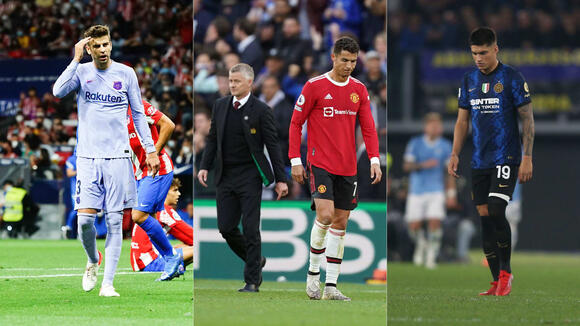 For a select few desperate to cling to elite status, the halfway mark of the group stage brings about potential inflection points in their respective seasons.

It's still early in the UEFA Champions League group stage, but it's not too early for clubs and individuals with big expectations and lofty mandates to start sweating.

With an opening phase that has already featured some surprising results—Young Boys over Man United, Club Brugge over Leipzig, Sheriff Tiraspol over Real Madrid—the potential for some shocks with longer-lasting implications is both significant and very real.

The irony for some of those facing the most early pressure in the Champions League currently is that if they had gotten their way last spring, the same kind of scenarios wouldn't be so daunting. For those original Super League dozen , their place in the premier European competition would have been guaranteed in perpetuity, and while there would be disappointment about failing to perform well in it, there wouldn't be any concern about returning next season with the chance to do it again. The financial windfall they all so desperately would love to keep receiving and the place among the elite they would love to keep in their grasp still need to be earned in the current setup, though, which means the upcoming matches carry an extra layer of weight.

For a third of that Super League dozen, this week represents a significant marker in the season with their Champions League ambitions and outlooks hanging in the balance.

The good vibes surrounding Man United after its summer transfer window and sudden reunion with Cristiano Ronaldo are wearing away. The Red Devils are now winless in three straight league matches and tumbling into sixth place, albeit in a very tight, congested top half of the table. If not for Ronaldo's stoppage-time heroics in the last Champions League match vs. Villarreal, they'd be winless in five matches in all competitions.

Given the summer expenditure and expectation that came along with it, there's the potential for some genuine trouble if manager Ole Gunnar Solskjaer can't right the ship Wednesday at Old Trafford against group-leading Atalanta. A defeat would keep United out of the top two in the group—and, if Villarreal can beat Young Boys on Wednesday in conjunction with a United defeat, it would send the club into last place.

With Raphaël Varane out injured, United's weaknesses being exposed more regularly and with a hellish schedule through next month's international break, it feels like yet another definitive time for Solskjaer on the Man United bench. He's often responded when facing the heat in the past, coaxing the results necessary to stay the course, but failing to beat Atalanta at home would push things close to the brink, especially with the resources that have been dedicated to reinforcing the squad.

Inter and AC Milan's resurgence in Serie A has not translated to the Champions League, where they have a combined one point through four games played and a combined three defeats compared to their one combined loss in domestic play. As the halfway point of the group stage hits, both already have to be feeling a sense of urgency.

With Liverpool and Atletico Madrid predictably in control of AC Milan's group, a defeat to a Porto team that's still unbeaten in Portugal's top flight, would spell doom. Milan would be without a point and four points out of third, with its hopes of reaching the knockout stage all but over.

For Inter, things are not as dire, especially considering the makeup of its quartet. But Sheriff Tiraspol's storybook-adjacent run to the top of its group has been a genuine curveball, and Inter's failure to score vs. Real Madrid and Shakhtar Donetsk coupled with its weekend defeat to Lazio have planted some seeds of doubt. If Inter becomes Sheriff's latest victim, then it, too, could be looking at a genuine possibility of a third-place finish becoming its best-case scenario. It's not exactly the return to European glory both sides envisioned, but it's still early enough to correct the course.

Despite El Clásico looming this weekend, Barcelona cannot afford to be at anything but its best Wednesday at home vs. Dynamo Kiev, and the reasons go beyond the ignominy of residing in last place in the group. After a pair of 3–0 defeats to Bayern Munich and Benfica, Barcelona is staring at the very real possibility of failing to get out of the group stage for the first time since 2000–01.

This would prove costly both in terms of ego and the balance sheet. According to Spanish outlet Sport , Barcelona is banking on the revenue that comes with getting out of the group stage. Clubs receive a windfall for each round through which they progress, and club vice president Eduard Romeu claims that "our budgets expect that the first team will reach the Champions League quarterfinals.” Approximately 20 million euros ($23 million) are on the line if Barcelona cannot progress to the final eight, and as of now, it looks bleak.

There is a pathway forward: If Bayern Munich runs away with the group and Barcelona can sweep Dynamo Kiev and exact retribution on Benfica in the return match, then a second-place finish is in play. But anything less than resounding results in the two upcoming matches vs. the Ukrainian side would spell doom, quell the optimism surrounding the young core that's being cultivated and deliver a further blow to the club's bleak financial situation.

Matchday five of champions league play begins today on Paramount+ and depending on how things go, Villarreal or Manchester United, Barcelona, and Red Bull Salzburg could all punch their tickets to the next round of play. Each of these teams needs a win to guarantee they're through but with a draw and a little help, they can still likely still get things done.
UEFA・13 DAYS AGO
firstsportz.com

UEFA Champions League: Villarreal vs Manchester United player ratings as Ronaldo and Sancho earn a 2-0 win for the Reds

Villarreal had no response what-so-ever to the likes of Manchester United at their own home ground. The Villarreal supporters at Estadio de la Ceramica had nothing to cheer about for their side as the Reds drilled two goals in the back of their net. The first-half was a rough one...
UEFA・13 DAYS AGO
CBS Sports

Matchday five of Champions League play wraps up today on Paramount+ as more teams look to join Bayern Munich, Liverpool, Ajax, Juventus, Manchester United, and Chelsea in the knockout stages. Spots are being locked up left and right as more teams look to get the job done. The day is headlined by Manchester City hosting PSG and the winner of Group A could be decided if City emerges from the fray.
UEFA・13 DAYS AGO

For Benfica to stand any chance of overtaking Barcelona in the Group E standings of the 2021 UEFA Champions League, the club needs a win on Tuesday. Barcelona has a cushion in second place after back-to-back wins against Dynamo Kyiv, but the two goals that it scored in those matches are the only ones Barca has in group play. Benfica has scored five times in the group stage, three of which came in its last match with Barcelona. You can stream the match live on Paramount+.
UEFA・14 DAYS AGO
CBS Sports

Matchday five of champions league play begins today on Paramount+ and depending on how things go, Villarreal or Manchester United, Barcelona, and Red Bull Salzburg could all punch their tickets to the next round of play. Each of these teams needs a win to guarantee they're through but with a draw and a little help, they can still likely still get things done.
UEFA・13 DAYS AGO
firstsportz.com

Barcelona played out a 0-0 draw against Benfica, and the second match of the Xavi-era has failed to bring out the desired result for the Catalan club. The result also means, that their chances of qualifying in the knockout stages of the Champions League depend on their result on the final match-day which is against German giants Bayern Munich.
UEFA・13 DAYS AGO
LFCTransferRoom

AC Milan travel to the Wanda Metropolitano to face Atletico Madrid knowing that they must win to keep alive their slim hopes of reaching the Champions League knockout stages. They have taken just one point in the first four games with Liverpool already confirmed as group winners. Milan come in...
UEFA・13 DAYS AGO

This content was produced in partnership with Gambler Media. Are you one of the soccer bettors, and fans, that are glad to see the back of the international breaks until March?. If you are, please join me: I am sick of all the breaks this season. I just want to...
UEFA・13 DAYS AGO
okcheartandsoul.com

Real Madrid vs. Sevilla a salve for LaLiga’s struggles in the UEFA Champions League

I always liked the Europa League more, anyway. Ahem. It hasn’t been a good week for Spanish football in the Champions League. Barcelona drew 0-0 with Benfica. Villarreal and Manchester United did what Villarreal and Manchester United do, and so did Cristiano Ronaldo: a late(ish) goal opening the way to a 2-0 away win at the Ceramica, which allows Michael Carrick to step down as interim manager to the interim manager with a 100% record. And Atletico Madrid conceded an 87th-minute goal to lose against Milan, just about the time when they decided that what they had to do was just not lose.
UEFA・10 DAYS AGO
CBS Sports

The Champions League group stage reaches its conclusion next week on Paramount+. With 11 places in the knockout stages already secured here's how European football's great powers are ranking right now:. The top tier: Title or bust. These teams should be disappointed with anything less than a semi final berth...
UEFA・7 DAYS AGO
fourfourtwo.com

It was on the last Saturday before Christmas back in 1998 that a late-night TV interview is said to have changed the course of German football and the modern game with it. It most certainly changed the course of Ralf Rangnick’s career, propelling him on the long road that would eventually lead to Old Trafford.Conducting the interview was Michael Steinbrecher, a presenter on the late-night ZDF Sportstudio, which first aired in 1963 to coincide with the opening day of the inaugural Bundesliga season. But during his 21 years co-hosting the programme, the intention was to be more than a mere...
PREMIER LEAGUE・4 DAYS AGO
BBC

We're now less than an hour away from kick-off between Manchester United and Crystal Palace at Old Trafford. You'll be able to catch up with all the post-match reaction on this page after full-time.
PREMIER LEAGUE・2 DAYS AGO
The Independent

Manchester United interim manager Ralf Rangnick will make his first appearance on the touchline at Old Trafford today with the visit of Crystal Palace.After watching the 3-2 win over Arsenal in the stands, Rangnick was unveiled on Friday and said he was looking to instill more "balance" to a team prone to conceding goals.That aim will get a stern first test from Crystal Palace, who have been a strong attacking unit with Conor Gallagher particularly impressing so far this season. FOLLOW LIVE - Manchester United vs Crystal Palace: Team news, line-ups and build-up for Premier League fixture todayUnited came...
PREMIER LEAGUE・2 DAYS AGO
San Diego Union-Tribune

Ralf Rangnick has started his tenure as Manchester United manager with a 1-0 win over Crystal Palace in the Premier League thanks to a rare goal from Fred at Old Trafford
SAN DIEGO, CA・1 DAY AGO
Sports Illustrated

Chris Armas was fired as Toronto FC coach after just 11 games, but he is headed to Manchester United to serve as an assistant.
MLS・1 DAY AGO
FanSided