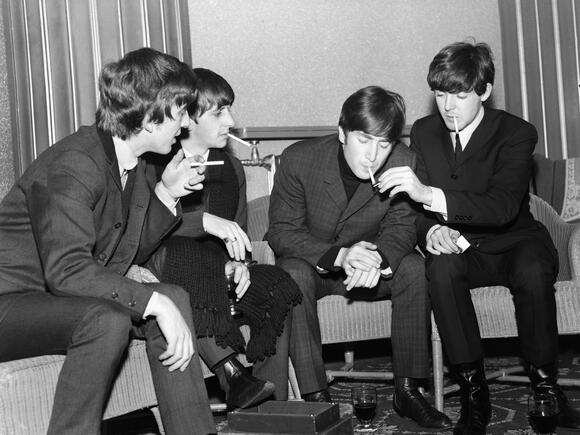 Paul McCartney broke down the time he and The Beatles were introduced to weed for the first time in a New York hotel room by fellow musician Bob Dylan in an excerpt of his forthcoming memoir published in The Times of London .

"​​What happened is that we were in a hotel suite, maybe in New York around the summer of 1964, and Bob Dylan turned up with his roadie. He'd just released 'Another Side of Bob Dylan,'" McCartney begins the story. "We were just drinking, as usual, having a little party. We'd ordered drinks from room service - scotch and Coke and French wine were our thing back then - and Bob had disappeared into a back room."

"He said, 'I've just been with Bob, and he's got some pot,' or whatever you called it then," McCartney recalls. "And we said, 'Oh, what's it like?' and he said, 'Well, the ceiling is kind of moving; it's sort of coming down.' And that was enough. After Ringo said that, the other three of us all leapt into the back room where Dylan was, and he gave us a puff on the joint."

McCartney continued to write that he and his bandmates "kept puffing away" after their first hit because they didn't feel any reaction, which ultimately enhanced their experience.

"Suddenly it was working. And we were giggling, laughing at each other. I remember George trying to get away, and I was sort of running after him. It was hilarious, like a cartoon chase. We thought, 'Wow, this is pretty amazing, this stuff.' And so it became part of our repertoire from then on."

McCartney concluded by explaining how he and the band acquired their own weed thereafter.

"To tell you the truth, it just showed up," he said. "There were certain people you could get it from. You just had to know who had some."

Throughout the years, McCartney has been one of the most prominent weed smokers. In the 1980s, for example, he was notably arrested while touring in Japan after customs officials discovered nearly half a pound of marijuana in his luggage. McCartney spent 10 nights in a Japanese prison before being released and deported from the country.

In 2015, however, McCartney told The Mirror that he has stopped smoking because of his role as a grandfather.

"I don't do it anymore. Why? The truth is I don't really want to set an example to my kids and grandkids. It's now a parent thing," he said. "Back then I was just some guy around London having a ball, and the kids were little so I'd just try and keep it out of their faces."

Paul McCartney and his daughter Mary had a father-daughter date night at the premiere of the upcoming docuseries ‘The Beatles: Get Back’ in London. It was a family affair at the London premiere of The Beatles: Get Back, an upcoming three-part documentary series that will offer Beatles fans an intimate glimpse of the band’s most pivotal recording sessions. Former Beatle Paul McCartney attended the premiere on Tuesday, Nov. 16 with daughter Mary, 52. The 79-year-old musician was all smiles as he posed with his photographer daughter on the red carpet, wearing a sharp navy blue suit.
MUSIC・20 DAYS AGO
iheart.com

Last weekend, Julian Lennon and his brother Sean attended a screening of The Beatles: Get Back documentary, followed by a special event hosted by Paul McCartney's wife Stella. After the festivities, Julian took to Instagram to share his amazement about the film and divulge that it made him feel even closer to his dad, the late John Lennon.
MOVIES・12 DAYS AGO
Outsider.com

John Lennon met Yoko Ono in November 1966 at a London art gallery as she worked on her exhibit. There was an immediate connection, and they rarely left each other’s sides after that. That meant if The Beatles were in the studio, so was Yoko. Paul McCartney said the rest of the band didn’t like this new dynamic.
CELEBRITIES・9 DAYS AGO
94.3 Jack FM

So, The Beatles are the greatest band of all time, right? Not if you ask Paul McCartney. Sir Paul himself feels that The Everly Brothers deserve the honor. British newspaper the Daily Mail reports that, according to a passage in his new book ﻿The Lyrics, the former Beatle says he and band mate John Lennon were plenty inspired by the pioneering American rock ‘n’ roll duo.
MUSIC・28 DAYS AGO

Great notices came in late tonight from LA for the premiere of Peter Jackson’s “Get Back” documentary about the Beatles. Disney Plus screened 100 minutes at El Capitan Theater in Hollywood for a wildly enthusiastic crowd. Stella McCartney represented Paul, Julian and Sean Lennon repped for John Lennon and Yoko Ono. Ringo Starr stayed away reportedly because of fears of COVID (no one blames him).
NEW YORK CITY, NY・18 DAYS AGO
DesignerzCentral

Is Mick Jagger about to physically fight Paul McCartney? Rock royalty’s been sniping each other for the last month, and one report says they’re ready to drop gloves. Gossip Cop investigates.
CELEBRITIES・13 DAYS AGO
iHeartRadio

George Harrison lets out a yawn just as McCartney latches onto an idea for one of the Beatles' biggest singles.
MOVIES・5 DAYS AGO
Cinema Blend

The Beatles are, quite simply, one of the biggest bands that has ever existed. Considering their popularity, it’s no surprise that an endless amount has been written about them and multiple documentaries and even dramatic films have been made about them. And while we unfortunately lost John Lennon far too early, the rest of the Beatles have been more than willing to talk about their time making music when they’ve been asked. But for the new Disney+ documentary series The Beatles: Get Back, Peter Jackson decided he did not want to ask. While he could have brought Paul McCartney and Ringo Starr in for modern interviews, Jackson says that’s not the way he wanted to tell the story.
CELEBRITIES・14 DAYS AGO

Paul McCartney is a legendary musician and composer who skyrocketed to fame when he joined The Beatles in 1957. Back then, the group was known as the Quarrymen and had no idea how much their lives were about to change. More than six decades later, Paul is one of the wealthiest artists in the entire world with a jaw-dropping net worth.
CELEBRITIES・6 DAYS AGO
Upworthy

Beatle George Harrison was pigeon-holed as the "Quiet Beatle," but the youngest member of the Fab Four had an acerbic, dry sense of humor that was as sharp as the rest of his bandmates.
CELEBRITIES・5 DAYS AGO
NME

Paul McCartney and Ringo Starr have shared tributes to late The Beatles bandmate George Harrison on the 20th anniversary of the latter’s passing. Harrison, died of lung cancer on November 29, 2001 at the age of 58. McCartney took to Twitter to share an old image of himself and Harrison...
CELEBRITIES・7 DAYS AGO
Parade

'Penny Lane?' More Like Dollars! Paul McCartney's Net Worth and How He Earned It, From the Beatles to Wings and More

Paul McCartney is the rock star with the highest net worth ever thanks to the beloved Beatle’s knack for timeless tunes and his unrivaled business savvy. That stems from growing up decidedly not wealthy. The “Love Me Do” singer once explained to The New York Times, “When I was in...
CELEBRITIES・12 DAYS AGO

Paul McCartney has opened up about The Beatles’ outlook on money, revealing that it was the driving force behind their early musical careers. While speaking to B&N CEO James Daunt (via Ultimate Guitar), McCartney was asked about a rumour that The Beatles “would sit around and say stuff like, ‘I’m going to write myself a new swimming pool,’ thinking of what you could buy with the money a hit record could make.”
CELEBRITIES・2 DAYS AGO
Closer Weekly

Paul McCartney and Ringo Starr Have a Lifelong Friendship! Check Out Photos of the Pair From The Beatles to Now

Paul McCartney and Ringo Starr are two of the biggest musicians in the entire world who rose to fame in the iconic British rock group The Beatles. They both went on to have successful solo careers when the band went their separate ways in 1970. After everything Paul and Ringo have been through together, they have a friendship that will last a lifetime.
CELEBRITIES・3 DAYS AGO
openculture.com

In its nearly eight-hour runtime Peter Jackson’s new documentary series The Beatles: Get Back offers numerous minor revelations about the world’s favorite band. Among the filmmaker’s avowed aims was to show that, even on the verge of acrimonious dissolution, John, Paul, George, and Ringo enjoyed stretches of productiveness and conviviality. Much else comes out besides, including that the catering at Apple Corps headquarters was miserable (amounting most days to toast and digestive biscuits) and that, even amid the excesses of the late 1960s, the Beatles dressed more or less respectably (apart, that is, from George’s occasionally outlandish choices of outer- and footwear). But it also lays bare exactly how they created a song.
MUSIC・6 DAYS AGO
Closer Weekly

Who Is Paul McCartney’s Wife Nancy Shevell? Get to Know the Multimillionaire Businesswoman

Paul McCartney got lucky in love for a second time in his life with his marriage to third wife, Nancy Shevell. The pair lead a low-key lifestyle, but the powerful businesswoman is a force to be reckoned with. Nancy was born in New York City on November 20, 1959. Her...
CELEBRITIES・10 DAYS AGO

(Jewish Press of Pinellas County via JTA) — Bobby Entel didn’t watch The Beatles’ Feb. 9, 1964 performance on the Ed Sullivan Show. He was seven years old at the time and in bed. Nor did he ever see them in person, visit their hometown of Liverpool, or cross Abbey Road.
MUSEUMS・11 DAYS AGO
MusicRadar.com

It's the most hyped music documentary for years and with eight hours of previously unseen, candid and restored footage of the Beatles working on their Let It Be album, it's not surprising Get Back has everyone talking. That footage was locked in a vault for over over half a century...
MOVIES・8 DAYS AGO
MusicRadar.com

"Now anything goes" – Paul McCartney looks back on the Beatles' Sgt. Pepper's era

Paul McCartney's interview with National Public Radio's Terry Gross has already unearthed some interesting insights on the Let It Be and his thoughts on Peter Jackson's Get Back film. But the interview also contains some fascinating reflections from McCartney on the Sgt. Pepper's Lonely Hearts Club Band and his insider perspective.
MUSIC・11 DAYS AGO
Indy100