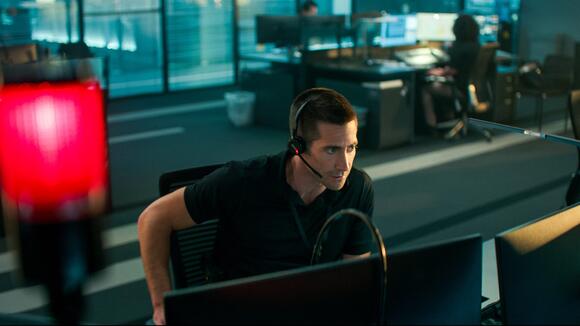 Netflix selectively reveals viewing information when the results are good. More and more stars are pressing the issue, like Kevin Hart did on Fatherhood and Ryan Murphy on Ratched . Such is the case this morning with Jake Gyllenhaal , divulging the stats on The Guilty , the movie he made in lockdown with his Southpaw director Antoine Fuqua .

According to Gyllenhaal, the film — shot over 11 days, with Fuqua working from a trailer after someone in his circle tested positive for Covid — will be seen in 69 million households in its first four weeks, and has been the streamer’s top movie in 91 countries. Gyllenhaal plays a 911 dispatcher with a sketchy past who tries to help a woman kidnapped by her husband, leaving her children in danger.

Being the Ricardos writer-director Aaron Sorkin and stars Nicole Kidman, Javier Bardem, J.K. Simmons and Nina Arianda joined Deadline’s Contenders Film: New York showcase to discuss the Amazon Studios biopic of sorts about Lucille Ball and Desi Arnez, played by Kidman and Bardem, respectively. For the film, Sorkin chose to compress a series of true events in the lives of the iconic married TV stars into one production week of making I Love Lucy — the Monday table read through Friday audience filming. Those plot points include Ball being accused at the time of being a Communist, a crisis that could...
MOVIES・1 DAY AGO
Deadline

Antoine Fuqua has entered into a first-look partnership with Netflix, continuing his relationship with the studio after the successful drama The Guilty starring Jake Gyllenhaal. The deal will focus primarily on films and documentary features. Fuqua also announced Friday the renaming of his production company to Hill District Media, from the previously titled Fuqua Films. The new name emphasizes his background and roots that translate to his work on the screen. “Working with Netflix on The Guilty was such a rewarding experience, both from an artistic and collaborative point of view,” said Fuqua. “I’m beyond excited to continue this relationship and expand...
MOVIES・2 DAYS AGO
IndieWire

“King Richard” star and Oscar contender Will Smith opened up his wallet for his cast members amid a reported $40-million payday, The Hollywood Reporter says. Smith produces and stars in the film as the father of Venus and Serena Williams, and per reports, after WarnerMedia shifted its Warner Bros. slate to day-and-date for 2021, he opted to give money to his fellow co-stars. The idea was to compensate the actors for lost theatrical returns. “Smith enjoyed a hefty payday — according to reports, as much as $40 million — and then personally wrote checks to the cast which includes Saniyya Sidney...
CELEBRITIES・29 DAYS AGO

Who Has Jake Gyllenhaal Dated? Here’s A Look At All His Past Loves

Long before there was Red (Taylor’s Version), Jake Gyllenhaal was busy breaking Gyllen-hearts left and right. Over the years, the 41-year-old actor has had several notable romances — from fellow actors Kirsten Dunst and Reese Witherspoon to pop icon Taylor Swift — some of whom have been co-stars, musicians, or models.
CELEBRITIES・5 DAYS AGO
digitalspy.com

The first trailer for the upcoming DC League of Super-Pets has finally been released, and it's the news we never knew we needed. The new animated feature has a star-studded cast, which includes The Office US's John Krasinski as Superman, Red Notice's Dwayne Johnson as Krypto the Super-Dog, and Jumanji's Kevin Hart as Ace the Bat-hound.
MOVIES・12 DAYS AGO
Ok Magazine

Not so well: Jake Gyllenhaal is staying mum about the new version of Taylor Swift’s song alleged to be about their relationship, but a source says he’s privately stewing. The 10-minute version of “All Too Well,” a bitter breakup ballad believed to recall their brief 2010 romance, “is even more damning than the original she put out nine years ago,” dishes the insider. “Jake can’t believe that she’s dredging up the past.”
CELEBRITIES・3 DAYS AGO
ComicBook

Production on Netflix's highly anticipated Extraction sequel is officially underway! An action-thriller starring Chris Hemsworth, Extraction was an instant hit when it was first released on Netflix last year. It didn't take long for the streamer to green light a sequel, with Hemsworth returning to reprise the role and director Sam Hargrave returning to take the helm. There is still very little information about Extraction 2 out in the wild, but we at least know that production on the sequel has finally begun.
TV & VIDEOS・6 DAYS AGO

Dionne Warwick still wants to make sure that Taylor Swift gets her scarf back. On Wednesday, the 80-year-old music icon appeared on the Drew Barrymore Show, where she discussed her hilarious tweets following the release of Red (Taylor's Version) when she learned that Swift's ex-boyfriend Jake Gyllenhaal still allegedly had the infamous scarf.
CELEBRITIES・4 DAYS AGO
The Hollywood Reporter

Cam Gigandet has signed with APA in all areas. Most recently with ICM Partners, Gigandet starred opposite Michael B. Jordan and Guy Pearce in writer Taylor Sheridan’s Amazon action thriller Without Remorse, based on Tom Clancy’s bestselling novel. Other major film credits include the original Twilight vampire movie, playing Peter Sarsgaard’s right-hand henchman in Antoine Fuqua’s MGM remake of The Magnificent Seven, and starring in the sports action drama Never Back Down. Gigandet’s movie appearances include the fantasy action drama Priest, starring opposite Cher and Christina Aguilera in the musical drama Burlesque, The Roommate and appearing opposite Emma Stone in the romantic comedy Easy A. On the TV front, he appeared in the Audience Network crime drama Ice, the CBS crime drama series Reckless, and a break out role on The O.C. as Volchok, Marissa Cooper’s bad-news boyfriend. Gigandet got his start with recurring roles on The Young and the Restless and Greg Berlanti’s WB drama Jack & Bobby.  He joins an APA roster that includes Melissa Leo, Kate Bosworth, Gary Oldman, Mel Gibson, Mary J. Blige, Curtis ’50 Cent’ Jackson, Tyrese Gibson, Ronny Chieng and Eddie Izzard. Gigandet is also repped by Lena Roklin at Luber Roklin Entertainment and Joey Stanton at Vybe Trybe.
CELEBRITIES・3 DAYS AGO
The Hollywood Reporter

Having just debuted her directorial debut Bruised on the service, Halle Berry is putting down roots at Netflix. Berry has entered into a multi-picture partnership with the streaming service, that will see her star in and produce Netflix feature films. The news comes the week after Berry’s Bruised debuted on the service, where, according to Netflix, it became the No. 1 film of the week in the U.S., and  No. 2 film, globally. The movie was streamed for 47.7 million hours in its first five days of release, according to the company. Says Berry, “The Netflix team has not only been collaborative...
CELEBRITIES・5 DAYS AGO
KQED

For two weeks now, Taylor Swift fans have been obsessing over her new, 10-minute version of “All Too Well,” and its gorgeous accompanying short film starring Sadie Sink and Dylan O’Brien. Online analysis has mostly revolved around reveling in the video’s many Easter eggs (the red scarf! the 1989 car!...
SAN FRANCISCO, CA・11 DAYS AGO

A Gorillaz Film Is in the Works at Netflix

A Gorillaz film is in the works at Netflix, confirms frontman Damon Albarn in an interview with Apple Music. He said:. "I'm at Netflix because we’re making a full-length Gorillaz film with Netflix. We’re having a writing session in Malibu this afternoon. It’s really exciting to do that. It’s something we’ve been wanting to do for a very long time. It’s been through so many incarnations…this Gorillaz doing a movie. Honestly.”
MOVIES・11 DAYS AGO
The Hollywood Reporter

No Time to Die star Ana de Armas is in and Scarlett Johansson is out in Apple Original Films’ adventure pic Ghosted, to be directed by Dexter Fletcher and produced by Skydance Media. De Armas will now star opposite Chris Evans in the romantic action-adventure film and executive produce; Evans produces alongside David Ellison, Dana Goldberg, Don Granger and Jules Daly. Evans and Johansson, known for playing Captain America and Black Widow, respectively, in the Marvel Cinematic Universe, had originally teamed up for Ghosted. The deal for the Apple film was the second Johansson signed after filing her lawsuit against Disney over...
MOVIES・2 DAYS AGO
uticaphoenix.net

‘Red Notice’ Becomes the Most Watched Film on Netflix –

What do you get when you pair a top FBI profiler, a renowned art thief and an infamous criminal? The #1 film for the third week in a row. And, Rawson Marshall Thurber’s Red Notice starring Dwayne Johnson, Gal Gadot and Ryan Reynolds has become Netflix’s most popular film with 328.80M total hours viewed after only 17 days. Heist complete (for now).
TV & VIDEOS・4 DAYS AGO
Fox 32 Chicago

CHICAGO - Her character may be "unforgivable" in her new Netflix film, but Sandra Bullock says she’s done an unforgivable film in the past: "Speed 2." The Oscar-winning actress sat down with FOX 32 Entertainment Reporter Jake Hamilton to talk about her new Netflix film "The Unforgivable," about a woman recently released from prison who finds no forgiveness from people on the outside or herself.
CHICAGO, IL・5 DAYS AGO
NME

Riz Ahmed on his most iconic film scenes: “Jake Gyllenhaal was such a weirdo!”

The scene: In his new sci-fi thriller, young father Malik (who believes the world is in danger from aliens) scolds his son about he walks off in a supermarket. Watch it on Amazon Prime Video from this Friday (December 3) “These are two amazing young actors – Aditya Geddada, who...
MOVIES・4 DAYS AGO
The Spokesman-Review

Taylor Swift released the rerecording of her album “Red” on Nov. 12, evoking tears from Swifties everywhere and probably Jake Gyllenhaal. “Red” marks Swift’s second rerecorded album after “Fearless.” In 2019, she vowed to rerecord her first seven albums after revealing that Big Machine Records owned the rights to her music.
MUSIC・10 DAYS AGO
imdb.com

Antoine Fuqua has entered a new creative partnership with Netflix, focusing on feature and documentary films. The multi-project agreement comes on the heels of the streaming premiere of “The Guilty,” for which star Jake Gyllenhaal is currently making awards rounds. As both a director and producer, Fuqua will execute the agreement under his newly renamed production banner Hill District Media.
MOVIES・3 DAYS AGO
Shropshire Star