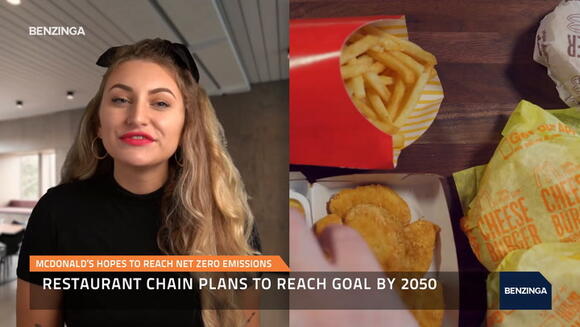 A McDonald’s worker has shared three little-known facts about the fast food chain in a viral TikTok.

New Zealand McDonald’s worker @charlton.a ’s video will make you think again before saying anything private in your car while you’re waiting for your food at a drive-thru.

The TikToker revealed that, when you’re in the drive-thru, the workers can apparently “hear everything”, even when their microphones are off.

He also said that their cameras take a “mugshot” of you so they know which order is yours. You can also apparently order a recipe book.

McDonald’s clarified the claims to indy100 , and said although microphones are necessary to clearly pick up audio, the conversations are not recorded.

To assist the crew in matching the order to the correct customer when they approach the pay window, a shot of the car, not the customer, is used along with a verbal confirmation of the order. These photos are not retained.

Although the TikToker mentioned a recipe book, this isn’t a book on how to make McDonald’s at home. Rather, it is a fundraising item created for Ronald McDonald House Charities three years ago, featuring recipes from the menu of restaurants that participate in the Supper Club events of the charity.

Since uploading the video the TikToker has received almost 30,000 likes and the video has been viewed over 320,000 times.

The comments were dominated by people asking if the workers can “hear everything”, why are the orders sometimes wrong?

A different McDonald’s employee replied and said: “Because we’re overworked minimum wage workers who are constantly pressured by managers to work Usain Bolt speed.” The original uploader also replied and said: “What she said but it depends on the Maccas too to be honest”.

One commenter asked him to clarify how well the microphones work. “We can hear quite a bit but we can definitely hear all the passengers in the car too,” he replied along with a laughing emoji.

One TikToker admitted: “I do the orders wrong on purpose when the customers rude to me HAHH.” [sic]

Another wrote: “I had my first shift at Maccas the other day and they put me on drive-thru, that went from scary to just infuriating fast lmao”.

A different employee wrote: “I get we will mess up your order anyway but please actually know what you’re gonna order before going through” along with a crossing-finger emoji.

Despite the claim that customers can get a McDonald’s recipe book, we’re not entirely convinced.

One commenter said: “Now you’re gonna have people asking for recipe books at my store and we don’t have them.” The uploader replied: “I just gained Maccas 100% more sales on recipe books.”

Indy100 has reached out to McDonald’s for verification.

to know what you want to order bf4 going thru would require a menu screen added before the microphones, not beside it. i dont care if they listen in as im usually by myself

A video which shows earthworms inside a McDonald's soft drinks machine has disgusted many online.
BEHIND VIRAL VIDEOS・4 DAYS AGO
EatThis

This Local Fast-Food Chain Is Opening Up Inside Walmart

McDonald's started closing down its locations inside of America's largest retail chain about 10 years ago, which subsequently left about 700 empty retail spaces inside of Walmart stores. Now, other fast-food chains are moving in—including Wendy's. America's second-largest burger chain recently opened up its first Hamburger Stand inside a Walmart...
GROCERY & SUPERMAKET・26 DAYS AGO
Mashed

This Is The Most Popular Fried Chicken Chain In The US, According To New Report

Do you love fried chicken? We know we sure do. An exemplary fried chicken will feature juicy meat with a crispy, well-seasoned crust: Something we enjoy making at home when we have the time and space to deal with a bunch of hot oil, and something we'll order out when we don't. Luckily, when we want to eat fried chicken out, there are tons of restaurants and fast food spots where we can find tasty versions of the dish, ranging from upscale interpretations at sit-down restaurants like Jean-George Vongerichten's NYC spot Perry St. to of, course, old standby chains such as Popeyes, Chick-fil-A, and Church's (via Food & Wine).
FOOD & DRINKS・23 DAYS AGO
Sunderland Echo

McDonald’s has unveiled its Christmas menu and it includes two new burgers to get you in the festive spirit. The new menu items will be available from 17 November for around six weeks. What’s on the Festive Menu?. The fast-food chain is launching a new Festive Stack and Festive Crispy...
RESTAURANTS・20 DAYS AGO

Video of McDonald's Workers Berated Over Splenda Packet at Drive-Thru Gets 3.8 Million Hits

"I'll f**k your ass up, girl," the man screamed at a female McDonald's employee after being told the restaurant had run out of Splenda, police said.
ATLANTA, GA・1 DAY AGO
11Alive

LOCUST GROVE, Ga. — A video of a violent fight is quickly going viral on Twitter. The brawl broke out at a McDonald's in Locust Grove, allegedly over a Splenda packet for a customer's cup of coffee. The incident happened at the McDonald's on Bill Gardner Parkway right off of...
LOCUST GROVE, GA・4 DAYS AGO
95.5 KLAQ

A guy and his horse casually strolled down to a McDonald's drive-thru over the weekend in Horizon City. Thanksgiving weekend was a busy one for many folks around town, from family gatherings to Friendsgiving to Black Friday shopping and, of course, the occasional odd occurrence of a man on a horse ordering drive-thru at a McDonald's.
HORIZON CITY, TX・2 DAYS AGO
EatThis

9 Fast-Food Chains That Are Phasing Out Dining Rooms

In order to make room for more drive-thru lanes and areas for curbside pickups, fast-food chains have been rethinking the concept of a modern-day restaurant with new design prototypes. And one element, in particular, seems to be taking up less and less real estate in a modern fast-food joint—the dining room.
RESTAURANTS・5 DAYS AGO

28 Secrets Popular Fast-Food Chains Are Hiding From You

Dear fast-food fans, there are some things you should know. The biggest, most popular restaurant chains are all keeping secrets from you—and we're talking things way juicier than just secret menu items. From what goes on at the food prep stations to secret freebies you can score any day of the year, take a peek behind the curtain of how major chains operate.
RESTAURANTS・6 DAYS AGO
Newsweek

Comments were split over whether the server or the TikToker's husband was responsible for ensuring the drink did not contain alcohol.
BEHIND VIRAL VIDEOS・1 DAY AGO
Mashed

While the frequent inability to order McDonald's creamy and elusive soft serve has long been a shared struggle of ice cream fans everywhere, the fast food juggernaut may be facing more than just customer backlash over its failing ice cream machines. It now finds itself in the center of a soft serve-fueled legal battle.
LAW・1 DAY AGO
Mashed

By now, we already know that a lot of what happens in fast food restaurants is usually less than ideal in terms of general cleanliness and hygiene. While most of America remains willfully ignorant (or simply do not care) of these conditions and continues to chow down on fast food burgers, shakes, fries, and nuggets, some of us are starting to get a little suspicious of just about anything that comes from one of these establishments. However, many of these scandals involve food items — like when multiple people alleged Dairy Queen was serving raw chicken — so that means drinks might be a safe bet, right?
BEHIND VIRAL VIDEOS・4 DAYS AGO
abc17news.com

Drive-thrus are all screwed up. Here’s what it’ll take to fix them

Late this summer, drive-thru times slowed by about 26 seconds compared to last year, according to a study. That may not seem like much — but in the world of fast food, every moment counts. “Mere seconds can be a make-it or break-it in terms of where a consumer decides...
RESTAURANTS・10 DAYS AGO
CNBC

Burger King will cut menu items to speed up its drive-thru lanes as part of U.S. turnaround

Burger King will cut menu items in the U.S. to speed up its drive-thru service. The burger chain's U.S. performance has been lagging behind that of its peers, pushing the company to revamp that business. Jose Cil, CEO of parent company Restaurant Brands International, said cutting down service times is...
RESTAURANTS・6 HOURS AGO
The Independent

Costa Coffee is collaborating with Marks & Spencer to serve food and drink items from the latter in Costa Coffee stores and drive-thru lanes from next year.The partnership is set to launch in spring 2022 in more than 2,500 Costa Coffee stores across the UK.Customers will be able to choose from more than 30 M&S menu items, which will include lunch options, hot meal boxes and children’s food.The selection will also include products from M&S’s Plant Kitchen and Made Without ranges in order to meet the a wide range of dietary requirements.Stuart Machine, chief operating officer of M&S, said the...
RESTAURANTS・13 DAYS AGO
soyacincau.com

Have you ever wandered across a story online and just ask yourself “why?”. Well, today, I came across one of those stories and honestly, I still haven’t gotten the “why” out of my head. So I thought, what better way than to just share this little “slice of Malaysia” with you. It’s about horses, McDonald‘s and US television.
PETS・10 DAYS AGO
107.9 LITE FM

An Open Letter to the Singing Wendy’s Drive-Thru Worker

In a video, a man and a woman are seen at the drive-thru window yelling, banging on the window, and throwing things at workers inside. The fight quickly escalates.
LOCUST GROVE, GA・4 DAYS AGO
Best Life

If You Bought Any of These 4 Drinks at Walmart, Throw Them Out, FDA Warns

No matter where you live in the U.S., there's almost no escaping the popularity of Walmart. 220 million people shop there every week for everything from groceries and beauty products to electronics and clothing. But if you recently purchased certain drinks at a Walmart location, you should get rid of them immediately due to a serious health risk they could pose. Read on to see which beverages should go into the bin.
ELECTRONICS・7 DAYS AGO
The Independent

People are appalled by video of millennials trying Cracker Barrel for the first time: ‘This is blasphemy’

A group of millennial journalists have sparked outrage on social media after compiling a video of their less-than-impressed reactions to trying Cracker Barrel menu items for the first time.On Thursday, Insider’s food section posted a video to Twitter titled: “Millennials try Cracker Barrel for the first time,” in which the New York City-based journalists revealed that they would be travelling to New Jersey to try the Southern-style restaurant chain’s most popular dishes.In the clip, the millennials then shared their first impressions of some of Cracker Barrel’s staples, such as the chicken ‘n dumplins, country fried steak, loaded hash brown...
RESTAURANTS・19 DAYS AGO