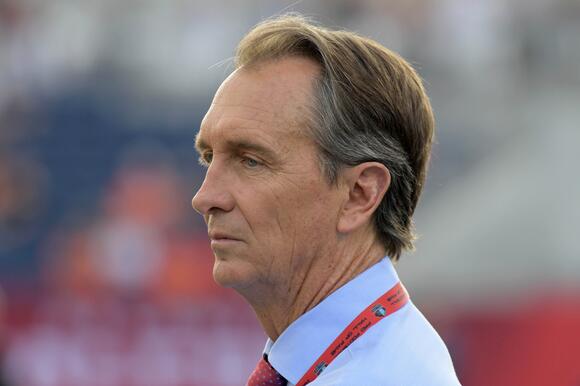 Once upon a time, Cris Collinsworth was maybe the best analyst in the NFL. His detailed breakdowns of schemes were a welcome respite from the cliches that usually permeate throughout NFL telecasts, and it’s apparent he prepared for every broadcast.

But just like players, broadcasters have their primes, too. Collinsworth is past his.

The longtime analyst made some puzzling statements during the Steelers’ 23-20 overtime win Sunday over the Seahawks, but few were more questionable than his proclamation about Cam Heyward. After the Steelers’ stalwart pass-rusher brought down Geno Smith with a sack in the second quarter, Collinsworth guaranteed Heyward will be enshrined in Canton.

“Cam Heyward — a no-question Hall of Famer, in my mind,” Collinsworth said.

His partner, Mike Tirico, followed up with more reasonable praise, calling a Heyward a “good player.”

While it’s great to see Heyward garner the respect he deserves, it was a bit overzealous for Collinsworth to declare he’s a surefire Hall of Famer. Heyward is a two-time first-team All-Pro and fifth in Steelers history with 60 sacks. With a couple of more productive seasons, he could be in the conversation for Canton.

But it’s too soon to say that now. Color analysts dampen their credibility with unnecessarily grandiose statements about players. It’s a trap that Collinsworth has fallen into as the years progress. I mean, he called Geno Smith a “veteran presence.”

The now-journeyman QB is about as reassuring as a three-alarm fire — despite his respectable effort Sunday.

Though Smith played well in the second half, he struggled in the first two quarters, and the Steelers were leading 14-0 at halftime. That prompted Collinsworth to make his strangest statement of the evening: he says he didn’t realize how important Russell Wilson was to the Seahawks.

“My first thought is, ‘How much do they miss Russell Wilson?,’” Collinsworth said. “I didn’t know he was quite as significant to this team as what he’s actually proving to be so far for a half of football.”

Basically, Collinsworth called Wilson a replacement quarterback. That’s about as silly as Jamal Adams declaring he’s the “best in the nation.”

It’s apparent that Collinsworth has lost his observational zip in recent years. He was confused at the end of regulation, wrongly declaring the Seahawks wouldn’t have been able to spike the football with one second remaining, even though that’s exactly what they did before the officials reviewed DK Metcalf’s catch. The stoppage in play helped the Seahawks, because it gifted them time to properly set up for their game-tying field goal.

The time on the clock was irrelevant.

And no, Cris, the mind-numbing sequence at the end of the game wasn’t “fantastic.”

At this point, Collinsworth is more NFL shill than analyst. He seldom criticizes officials and overpraises players. His performance was about as frustrating as watching Smith and Alex Collins carve up the Steelers’ defense.

they are not nor never were essential to the football experience! no real lifelong football fan needs two men telling us what's going on! I can follow the game perfectly with volume on MUTE

I don't see anything wrong with his opinion. Many share his opinions. I believe Cam Heywood is a Hall of Famer. Many would agree with him on Russell Wilson. Seattle has weapons around Wilson so how significant is Wison? Fair question. Wilson is no Mahomes, Murray or Allen. He has better skilled players than these quarterbacks. If you play fantasy football then you can easily back up what Collinsworth said. It is just an opinion. One of several that people have. The debate should be respected by all whether you agree or disagree.

agreed. his praise seems insincere and trite. the rabbit trails he takes often distract from the game

The Geno Smith Show is coming to an end for the Seattle Seahawks. Quarterback Russell Wilson was activated from injured reserve on Friday, the Seahawks announced. Wilson suffered two injures in his middle finger on Oct. 7 and hasn’t played since. He had a tendon rupture and a dislocation, and the initial recovery timeline was six weeks.
NFL・15 DAYS AGO
The Spun

Few NFL games this season, if any, featured more questionable officiating calls than last Monday’s game between the Pittsburgh Steelers and the Chicago Bears. There were several highly questionable calls in that Monday contest, when the Steelers beat the Bears, 29-27. Bears quarterback Justin Fields was on the receiving end...
NFL・14 DAYS AGO
The Spun

The Seattle Seahawks waived quarterback Jake Luton from their practice squad on Monday, making room for tight end Tyler Mabry. Luton had been with the Seahawks since early September. He was briefly promoted to the active roster last month as a backup to Geno Smith when Russell Wilson missed time with an injury.
NFL・12 DAYS AGO
Sporting News

Steelers linebacker Melvin Ingram was traded to the Chiefs on Tuesday in return for a sixth-round draft pick ahead of the NFL trade deadline. The Steelers had just signed 32-year-old Ingram in the offseason. What sparked the trade, though, was Ingram reportedly wanting more playing time on the Steelers. Through seven games, he was only a starting player in one Steelers game and he played in six total games.
NFL・25 DAYS AGO

There was a time when the Ravens would have celebrated holding Le’Veon Bell to 48 yards on 11 carries. Not so long ago, he lived in their nightmares — those outside runs on which he’d wait and wait, then snap off a double-digit gain, or the pass routes on which he’d toy with some poor linebacker. As an All-Pro for the Pittsburgh Steelers, he played a starring role in some of the most painful ...
NFL・18 DAYS AGO
Fox News

Tony Romo was criticized on social media Sunday after seemingly defending Aaron Rodgers over the fallout from his vaccine status during CBS’ broadcast of the Green Bay Packers-Seattle Seahawks game. The former Dallas Cowboys quarterback applauded Rodgers for taking "responsibility" over "misleading" fans about his vaccine status when he told...
NFL・12 DAYS AGO
The Spun

The Packers announced just moments ago they’ve activated Rodgers off the reserve/COVID-19 list. Rodgers missed Green Bay’s Week 9 game against the Kansas City Chiefs. Jordan Love got the start in his place, but didn’t have much success in a 13-7 loss to Patrick Mahomes and company. Rodgers, the 2020-21...
NFL・14 DAYS AGO
ClutchPoints

Seattle Seahawks quarterback Russell Wilson is nearing his return, and if his latest post is any indication, the rest of the NFL should be scared. Wilson has been sidelined after their Week 5 loss to the Los Angeles Rams after badly injuring his middle finger in his throwing hand. He had to undergo surgery to repair the issue, keeping him out of commission from Week 6 to their latest Week 8 outing.
NFL・26 DAYS AGO

After almost a year-long break, veteran running back Adrian Peterson found his way back to the league once again after being signed by the Tennessee Titans in early November. Due to the season-ending injury of star rusher Derrick Henry, Mike Vrabel needed the contribution of the 36-year-old who eventually saw action in three games.
NFL・4 DAYS AGO
93.7 The Fan

Pittsburgh Steelers linebacker Delontae Scott may have only played seven snaps on Sunday when the Steelers took on the Los Angeles Chargers, but he caught the attention of Vernon Shazier, the father of former linebacker Ryan Shazier.
NFL・4 DAYS AGO
93.7 The Fan

Officially activating Ben Roethlisberger, the Steelers also had a trio of players from the practice squad–all on defense before playing at Los Angeles
NFL・7 DAYS AGO
The Spun

It’ll be another week without star quarterback Kyler Murray for the Arizona Cardinals. Murray, who’s been dealing with an ankle injury, has missed multiple games for the NFC West franchise. He’ll miss another one on Sunday afternoon. The Cardinals announced on Sunday that Murray is officially inactive for this afternoon’s...
NFL・6 DAYS AGO

Former Saints quarterback Drew Brees made his broadcasting debut on Thursday night and had to do his best imitation of the “Collinsworth slide.”. Cris Collinsworth always does his famous slide after Al Michaels is done talking and Brees tried the same thing after Mike Tirico was done. After Collinsworth saw...
NFL・2 DAYS AGO
ClutchPoints

The Pittsburgh Steelers expected a lot from their rookie Najee Harris. However, what he’s done for the franchise has exceeded everyone’s expectation. Shouldering a workload comparable to some of the best running backs in the league, Harris has carried this ailing Steelers offense to a 5-3-1 record entering Week 11.
NFL・6 DAYS AGO
93.7 The Fan

Watt, Haden and others OUT for Steelers Sunday

A number of key players will indeed miss the Steelers game at Los Angeles with news still out on Ben Roethlisberger & Minkah Fitzpatrick. A couple are back, though.
NFL・8 DAYS AGO
The Spun

Longtime NBC analyst Cris Collinsworth shared some interesting information on Pittsburgh Steelers quarterback Ben Roethlisberger during tonight’s broadcast. Roethlisberger has been out for nearly two weeks after landing on the COVID-19 list. However, he bounced back in time to play on Sunday night. According to Collinsworth, Roethlisberger mainly kept in...
NFL・6 DAYS AGO
93.7 The Fan

Could Ben Roethlisberger actually play for another team in 2022?

Pittsburgh Steelers quarterback Ben Roethlisberger may want to play next season, but he’s not guaranteed to come back. Could Roethlisberger play for another contender?
NFL・9 DAYS AGO
Field Gulls

NFL boots Seahawks vs. 49ers off of Sunday Night Football

The Seattle Seahawks have been the kings of primetime throughout the Pete Carroll era, but not only are they just 1-3 in night games this season, they have been just excruciatingly boring to watch in general while also being a bad football team. At 3-7 and with a minuscule chance...
NFL・4 DAYS AGO
93.7 The Fan

Cris Collinsworth Says One Browns Position Needs To Step Up

The Cleveland Browns have a huge Week 12 game on Sunday night football against their division rival, the Baltimore Ravens. The Browns have not been able to crack the code to beat the Ravens since September 2019 during Freddie Kitchens’ tenure. Cris Collinsworth will be in the booth for the...
NFL・3 DAYS AGO