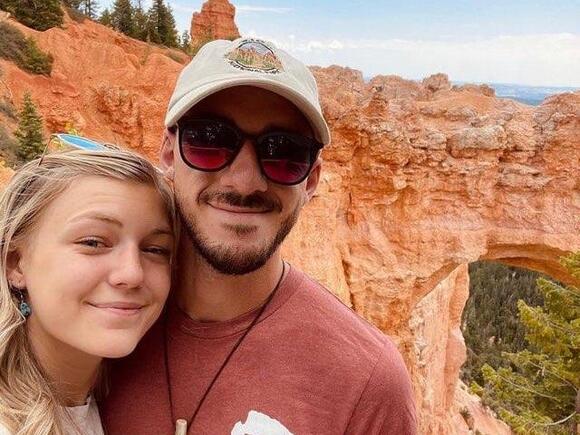 Gabby Petito's mother said she thinks Brian Laundrie's family "knows most of the information" about her daughter's disappearance and death.

"I believe they know probably, if not everything, they know most of the information," she added. "I would love to just face to face ask why are you doing this, just tell me the truth."

Petito and Laundrie - who were engaged - embarked on a cross-country road trip in July and were documenting all of their stops online. In the interview, Petito's mother recalled getting calls, texts, and FaceTime calls every day from the road.

On September 1, Laundrie returned home to North Port, Florida - but without Petito.

Her parents reported her missing on September 11 .

Laundrie was then reported missing on September 17 , when his parents claimed after he went out for a hike in the Carlton Reserve in Florida, later changing the date that they claimed they last saw him.

Petito's body was found in Wyoming on September 21 in Grand Teton National Park. Her death was ruled a homicide .

Petito's stepfather, Joe Schmidt, said he didn't understand why the Laundries didn't contact them when something appeared wrong.

"If Brian was staying at my house and Gabby returned to my house without him in his vehicle I'd be on the phone with his parents saying 'we've got an issue. We've got some stuff we gotta talk about, like, now. Call me back,'" he continued.

"It's torturous, if they're withholding something, and they don't want to let us know. Yeah, that's cruel," he added.

Laundrie remains the only person of interest in the case of Petito's death and a manhunt to find him remains active.

This is how responsible people act:"If Brian was staying at my house and Gabby returned to my house without him in his vehicle I'd be on the phone with his parents saying 'we've got an issue..."

The Laundries definitely know what happened to Gabby, that's why they immediately retained a lawyer. Unfortunately they'll probably never admit the truth because they're afraid they'll be charged for not turning in Brian when they had the chance

NORTH PORT, Florida — The family attorney for Brian Laundrie says an autopsy shows the man took his own life in the midst of a massive manhunt. Laundrie became the center of a police investigation after police found the body of his fiancée, Gabby Petito, in rural western Wyoming. Laundrie had returned home to North Port, Florida, without Petito.
PUBLIC SAFETY・12 DAYS AGO
AL.com

Gabby Petito’s family: ‘Additional individuals’ could be charged in her death

The lawyer for Gabby Petito’s family suggested there may soon be charges filed against “additional individuals” after authorities confirmed Brian Laundrie, her fiancé and the lone person of interest in her strangulation slaying, died by suicide. Attorney Richard Stafford floated the possibility in a press release late Tuesday, which also...
PUBLIC SAFETY・10 DAYS AGO
HollywoodLife

Brian Laundrie, the sole person of interest in the killing of his fiancée, Gabby Petito, died by suicide, a Florida medical examiner said.
PUBLIC SAFETY・12 DAYS AGO

Brian Laundrie died by suicide, according to the attorney representing his family. Laundrie, 23, was a person of interest in the death of his fiancee 22-year-old Gabby Petito. “Chris and Roberta Laundrie have been informed that the cause of death was a gunshot wound to the head and the manner of death was suicide,” said the Laundrie attorney Steven Bertolino.
LEE COUNTY, FL・12 DAYS AGO
WTRF- 7News

Some legal experts are saying that even though Laundrie was the lone suspect in Gabby Petito's death, it’s possible other people could be charged in the case.
PUBLIC SAFETY・6 DAYS AGO
CNN

(CNN) — Brian Laundrie's parents discovered a handgun was missing when they voluntarily surrendered their firearms to law enforcement the same day they informed authorities that their son was missing, according to the family's attorney, Steven Bertolino. Bertolino's comments come days after a Florida medical examiner confirmed Laundrie, who was...
NORTH PORT, FL・9 DAYS AGO
americanmilitarynews.com

Brian Laundrie, who made headlines as a person of interest in the disappearance of his fiancée Gabby Petito, died of gunshot wound to the head, according to a statement from the Laundrie family attorney Steven Bertolino. Autopsy results confirm the manner of death is suicide, Brian Entin, a reporter for...
PUBLIC SAFETY・12 DAYS AGO

Thanksgiving was an emotional holiday for the family of Gabby Petito. Yesterday was the first holiday that her parents spent without their 22-year-old daughter, and though they focused on what they were grateful for, they also still mourned the loss of their outdoor enthusiast. In honor of Petito, her loved ones took to social media and shared touching messages.
FAMILY RELATIONSHIPS・9 DAYS AGO
HuffingtonPost

An autopsy report on Brian Laundrie found he died from a self-inflicted gunshot wound to the head, a lawyer for his family told media outlets Tuesday. His parents, Chris and Roberta Laundrie, “have been informed that the cause of death was a gunshot wound to the head and the manner of death was suicide,” the family’s lawyer, Steven Bertolino, said. “Chris and Roberta are still mourning the loss of their son and are hopeful that these findings bring closure to both families.”
PUBLIC SAFETY・12 DAYS AGO
104.1 WIKY

(NEW YORK) — The death of Brian Laundrie, the boyfriend of murdered travel blogger Gabby Petito, has been ruled a suicide, according to the Laundrie family attorney. Laundrie’s remains were found Oct. 21 at the Carlton Reserve in North Port, Florida, in an area that had been submerged in water during a month-long search. The Sarasota County medical examiner did not conclude a manner or cause of death, so Laundrie’s remains were brought to a forensic anthropologist for analysis.
SARASOTA COUNTY, FL・12 DAYS AGO
Popculture

Gabby Petito's parents are not sitting idly by while others face similar situations to their late daughter. That's why they reached out and tried to help when another young girl went missing on a cross-country trip to visit her boyfriend. Lateche Norris last spoke to her parents after arriving in California. A phone call to her mother on Nov. 5 indicated she'd been fighting with her boyfriend and promised to call her back the next day.
PUBLIC SAFETY・1 DAY AGO

Gabby Petito’s family launched new social media platforms dedicated to finding missing people. “We have converted our original #findgabby page on FB into a missing persons page,” stepdad Jim Schmidt tweeted Wednesday. “We are expanding it to Twitter and Instagram too. A work in progress, but we are committed to help find the missing.”
PUBLIC SAFETY・4 DAYS AGO
Outsider.com

An Indiana mother is desperately searching for her 20-year-old daughter, who vanished in California three weeks ago after getting into a fight with her boyfriend. Lateche Norris hasn’t been heard from since she frantically called her mother, Cheryl Walker, on a stranger’s phone Nov. 5 in San Diego seeking help tracking down her wayward beau.
SAN DIEGO, CA・6 DAYS AGO
Wave 3

SARASOTA, Fla. (WWSB) - Nichole Schmidt has described herself as a mom on a mission, following the tragic death of her daughter Gabby Petito. On this Thanksgiving, she tweeted in memory of her daughter, saying she was thankful to have had her in her life. “Gabby will forever remind me...
SOCIETY・10 DAYS AGO

TAMPA, Fla. (WFLA) — For the parents of Gabby Petito, Thursday was the first Thanksgiving that their daughter would never be able to pay a visit again. According to authorities, Gabby Petito was strangled to death while at Wyoming’s Grand Teton National Park. Her body was was found at a campsite in the park on Sept. 19, weeks after her death.
TAMPA, FL・10 DAYS AGO
News 12

The Blue Point native mother's says things could have gone differently if police in Utah had done more.
PUBLIC SAFETY・3 DAYS AGO
Insider

A Texas man was convicted of killing his wife who asked to get a divorce the day after they got married: officials

Tareq Alkayyali, 39, was sentenced to 23 years behind bars for killing his wife who he got married to in his home country of Jordan in 2018.
TEXAS STATE・19 HOURS AGO
BBC

The father of Ava White, who was stabbed to death in Liverpool, has said his family is "completely devastated and heartbroken" and thanked people for their ongoing support. The 12-year-old was out with friends in Liverpool city centre when she was attacked on 25 November. A 14-year-old boy has been...
PUBLIC SAFETY・2 DAYS AGO