Immigration news as it matters to New Yorkers. 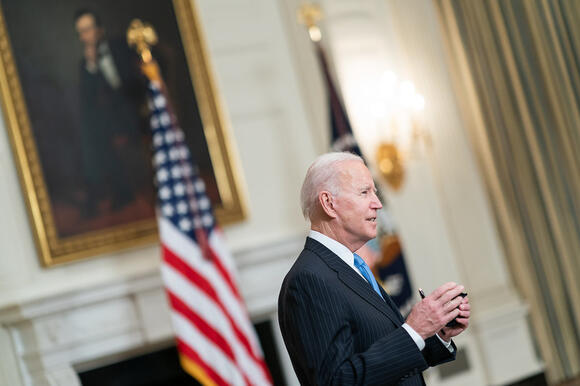 This summary was featured in Documented’s Early Arrival newsletter. You can subscribe to receive it in your inbox three times per week here .

In other federal immigration news…

According to several people who attended a virtual meeting with Biden officials on Saturday, dozens of immigration advocates clicked out of the meeting to protest the administration’s reintroduction of Remain in Mexico. Before the meeting started, activists read a statement accusing the administration of “playing politics with human lives” and said they couldn’t “come into these conversations in good conscience.” “I cannot stand one more meeting of them pretending,” said Ariana Saludares, an advocate from the New Mexico-based Colores United. A White House official told Politico that “the Biden Administration has been very clear that MPP is not an immigration policy we agree with or support.” The official added that they have to comply with the law and plan on restoring the program. Politico

President Joe Biden tasked Vice President Kamala Harris months ago with addressing the reasons Central Americans migrate to the southern border. But seven months later, migrants from farther away in South America are overwhelming the Biden administration. Efforts were launched in the Northern Triangle countries to set up internet access and invest in farmers, but then more Haitian migrants began traveling to the U.S. through South America. The Biden administration is still looking for ways to approach causes of migration. A spokesperson told CNN that the State Department funded Creole and Spanish digital advertisements targeting Haitian migrants to advise them on U.S. border and immigration policies. CNN

U.S. and Mexico Reach Deal for “Remain in Mexico”

This summary was featured in Documented’s Early Arrival newsletter. You can subscribe to receive it in your inbox three times per week here. U.S. officials told reporters Thursday that the Biden administration has finally come to an agreement with the Mexican government to bring back the Trump-era program “Remain in Mexico.” As mentioned in Monday’s […] The post U.S. and Mexico Reach Deal for “Remain in Mexico” appeared first on Documented.
FOREIGN POLICY・18 HOURS AGO
The Guardian

Sparks flew on the set of ABC's "The View" Friday as co-hosts clashed over President Biden's decision to restart the Trump-era "Remain in Mexico" policy. During a segment discussing Biden's decision, co-host Ana Navarro butted heads with Sunny Hostin and guest host America Ferrera over the policy, with the latter two excoriating Biden for breaking his campaign promise to end it, and the former arguing that the policy discouraged people from attempting to make the dangerous journey to the southern U.S. border.
PRESIDENTIAL ELECTION・2 DAYS AGO
US News and World Report

WASHINGTON (Reuters) - The U.S. Treasury Department will impose a series of sanctions next week to mark the U.S. Summit for Democracy, targeting people engaged in corruption, serious human rights abuse and who undermine democracy, among others, a Treasury Department spokesperson said on Friday. The Treasury declined to provide specifics...
U.S. POLITICS・2 DAYS AGO

Will President Joe Biden's $2 trillion social-spending and climate package actually get the Senate's OK this month, as that chamber's leader has promised? Two analysts from opposite ends of the political spectrum say that looks likely.
PRESIDENTIAL ELECTION・2 DAYS AGO
The Guardian

The Biden administration’s move to revive Donald Trump’s “Remain in Mexico” policy will subject thousands of people to “enormous suffering” and leave them vulnerable to kidnap and rape as they languish in dangerous Mexican border cities, migration advocates have warned. After reaching a deal with Mexico, the US will by...
PRESIDENTIAL ELECTION・2 DAYS AGO
Reuters

Coughing Biden says he has a cold

WASHINGTON, Dec 3 (Reuters) - A hoarse-sounding U.S. President Joe Biden said on Friday he has a cold, possibly contracted from a grandson. After a speech about the U.S. economy in which he sounded congested and coughed several times, reporters asked Biden if he was okay. "I'm OK," Biden said....
U.S. POLITICS・2 DAYS AGO
Washington Post

Biden is right that global democracy is at risk. But the threat isn’t China.

If the Biden administration has a foreign policy doctrine, it’s surely the president’s oft-stated vision that democracies are locked in a must-win historic battle with autocracies. “I predict to you your children or grandchildren are going to be doing their doctoral thesis on the issue of who succeeded, autocracy or democracy, because that is what is at stake,”Joe Biden intoned in his first news conference as president.
PRESIDENTIAL ELECTION・2 DAYS AGO

US announces deal with Mexico to restart Trump-era asylum policy

The Biden administration will resume the “Remain in Mexico” policy next week after reaching an agreement with the Mexican government, according to the Department of Homeland Security. “Following the Government of Mexico’s independent decision to accept individuals returned pursuant to MPP, the Departments of Homeland Security and Justice will work...
POTUS・3 DAYS AGO
wlsam.com

Due to court order, ‘Remain in Mexico’ rules for migrants are likely to restart Monday

The Biden administration plans to relaunch the Trump-era border program known as “Remain in Mexico” on Monday due to a court order, meaning the US will again send migrants to Mexico to await their immigration court hearings, administration officials announced Thursday. Restarting the program is still pending final approval from...
IMMIGRATION・3 DAYS AGO
KYMA News 11

The U.S. and Mexican governments have agreed to once again send asylum seekers to Mexico as they await their court hearings. The post ‘Remain in Mexico’ policy to be reinstated appeared first on KYMA.
YUMA, AZ・3 DAYS AGO

If the president needs to sweat the details before he can end the program, as courts have ruled, he must do so
SAN DIEGO, CA・3 DAYS AGO
Washington Times

Mexico said Thursday that it will allow the restart of a Trump-era border policy that immediately sends illegal immigrants back across the boundary after the Department of Homeland Security announced it would speed up court hearings, offer vaccinations and help improve conditions for the migrants. The Biden administration made clear...
POTUS・3 DAYS AGO
San Diego Union-Tribune

A controversial policy that forced many migrants seeking asylum to stay in Mexico while awaiting the processing of their asylum claims by US authorities will reportedly resume soon.The so-called “Remain in Mexico” policy was halted in January after President Joe Biden promised to do so during his 2020 campaign. Begun by the Department of Homeland Security (DHS) under former President Donald Trump’s administration in 2019, the policy applies to “[c]ertain aliens attempting to enter the US illegally or without documentation” including asylum seekers who arrive on land via Mexico, and dictates that they will be returned to Mexico with the...
IMMIGRATION・10 DAYS AGO
Reuters

MEXICO CITY (Reuters) - The Biden administration and Mexico’s government have still not come to an agreement on the reinstatement of a Trump-era program that forced asylum seekers to wait in Mexico for U.S. court hearings, two Mexican government officials said Wednesday. The news outlet Axios reported earlier Wednesday that...
U.S. POLITICS・11 DAYS AGO
thefreshtoast.com

Can The Biden Administration Deschedule Cannabis?

Just because Joe Biden’s administration has the power to deschedule, it does not mean that the administration will deschedule. Last month, Senators Elizabeth Warren and Cory Booker requested that the U.S. Attorney General, Merrick Garland, initiate proceedings under the Controlled Substances Act (CSA) to deschedule cannabis. This would, as the letter to Garland says, “decriminalize” marijuana.
U.S. POLITICS・14 DAYS AGO

Immigration news as it matters to New Yorkers.