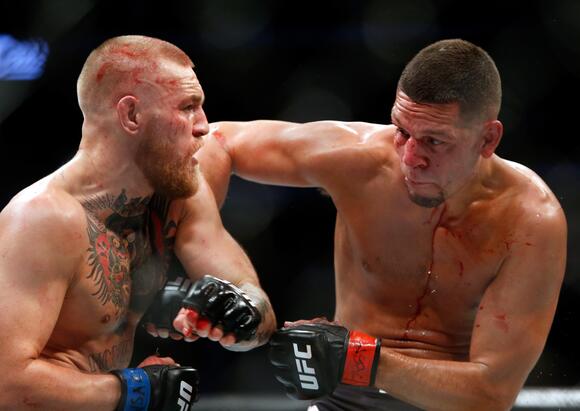 Nate Diaz has been advised by Dominic Cummings , the former chief adviser to Prime Minister Boris Johnson , to resist signing a new UFC contract to gain more “leverage” in pursuit of a third fight with Conor McGregor .

Cummings made headlines at the height of the Covid-19 pandemic in the UK after a 260-mile trip to Durham during lockdown.

The Prime Minister eventually dismissed his chief advisor six months later, before Cummings would publicly criticise him for his handling of the Covid-19 pandemic.

And he has now revealed a passion for MMA by reaching out to Diaz surrounding his uncertain future in the octagon.

Diaz has one fight remaining on his UFC contract, with talks to fight UFC welterweight Vicente Luque failing to progress towards a conclusion, leaving open the possibility of a third fight with McGregor, once he has recovered from injury.

Cummings wrote: “Do not sign new UFC contract, you will make more cash outside and Dana White will come do a deal at some point for trilogy Conor McGregor fight.

“But outside you’ll have much more leverage and make more $. Look how they screwed Georges St-Pierre, now waiting for contract to expire.”

Cummings made reference to the UFC blocking St-Pierre from boxing Oscar De La Hoya in September, with UFC president Dana White holding the Canadian to his contract.

Abdelaziz told MMA Fighting : “I believe Nate Diaz has one fight left on his contract. I like the fight. I think it’s a great fight. I think the UFC, it’s a business, they want to make money and I think Nate and Conor [McGregor] will make them so much money.

“I think the only way the UFC will agree to make this fight happen [is] if Nate re-signs with the UFC. But I don’t know if this is good for Nate to re-sign with the UFC.

“I can push as much as I can but I don’t know what they want to do. Vicente, 100 percent will fight Nate or Nick [Diaz].”

Conor McGregor has shown off his new jacked physique ahead of his anticipated UFC return, with fans joking he's set to come back as a heavyweight. McGregor is on the mend after undergoing surgery on his broken leg that he suffered against Dustin Poirier last July. He has been keeping...
UFC・7 DAYS AGO
ClutchPoints

2021 wasn’t the greatest year in terms of fighting for Conor McGregor, getting knocked out by Dustin Poirier in January then breaking his leg against his UFC rival in July. However, the Irishman is on the mend now and according to his coach, looking more jacked than ever. Via The...
UFC・8 DAYS AGO
ClutchPoints

Nate Diaz is an active MMA fighter for the UFC, and he is the younger brother of fellow UFC fighter and MMA great Nick Diaz. In this article, however, we will focus on Nate Diaz’s net worth in 2021. Nate Diaz’s Net Worth in 2021 (estimate): $8 million. Nate Diaz’s...
STOCKTON, CA・8 DAYS AGO
The Independent

Khabib Nurmagomedov insists Justin Gaethje is the hardest puncher he has ever faced in the UFC.Having mixed it with Conor McGregor and Dustin Poirier, The Eagle then called it a day after his next fight, which saw him knock off Gaethje on Fight Island, concluding a glittering career with a 29-0 record.But the October 2020 meeting was memorable for the Russian, who maintains the American “hit like a truck”.“This guy [Justin Gaethje] hit like a truck, you know,” Nurmagomedov told Mike Tyson on his Hotboxin’ podcast.“Nobody hit me harder than Justin Gaethje. His kick, his punch, his left hook, right...
UFC・9 DAYS AGO

Conor McGregor has some explaining to do. The former UFC lightweight champion went to war with Khabib Nurmagomedov back in late 2018 and the nasty, pre-fight buildup was considered the “darkest” in the history of the promotion, with “Notorious” taking personal potshots at all things “Eagle.”. Including Dagestan. That didn’t...
UFC・9 DAYS AGO
SPORTbible

Khabib Nurmagomedov and his team jokingly asked Herb Dean how much he was paid to allow Conor McGregor's cheating antics at UFC 229. Khabib defended his lightweight title by forcing bitter rival McGregor to tap out to a neck crack in the fourth round of the bout at the T-Mobile Arena in Las Vegas.
UFC・13 DAYS AGO
dexerto.com

Jake Paul has clapped back at UFC superstar Nate Diaz after the Stockton fighter played down his victory over Ben Askren by pointing out that he’s lost six times more fights than Askren. Jake Paul’s boxing career started picking up in momentum after he knocked out Ben Askren in the...
UFC・10 DAYS AGO
MMA Fighting

Don’t expect Nate Diaz to get on the Jake Paul bandwagon anytime soon. On Tuesday, the no-nonsense Diaz fired back at Paul for comparing him to Ben Askren, continuing a conversation that stemmed from Askren suggesting that the infamous YouTuber is better at boxing than some are giving him credit for. Paul has become one of the most divisive names in combat sports after parleying his social media fame into a professional boxing career, which has included wins over former ONE Championship titleholder Askren and former UFC champion Tyron Woodley.
COMBAT SPORTS・10 DAYS AGO

“Conor McGregor, now his stock is going down,” Georges St Pierre advises McGregor to bring some changes in his lifestyle

Anthony Smith has had a strange beef with Conor McGregor. The former UFC champion has been firing shots at Smith for a long time. The UFC light heavyweight had trouble figuring out what the Irishman’s problem was. He now believes he has figured it out. Anthony Smith took to his...
UFC・14 DAYS AGO
The Independent

Michael Chandler has said he is not intimidated by Conor McGregor’s trash-talking abilities, as the American attempts to set up a fight with the Irishman in 2022.Chandler debuted in the UFC in January, on the undercard of McGregor’s second fight against Dustin Poirier.On that night, Chandler knocked out Dan Hooker in the first round, but he has since suffered back-to-back losses. In his second UFC fight, the 35-year-old almost stopped Charles Oliveira in the first round but was finished early in the second with the vacant lightweight title on the line. Then, in early November, Chandler lost to Justin...
UFC・2 DAYS AGO
The Independent

Conor McGregor’s coach John Kavanagh has provided an update on his fighter’s return to the Octagon, following the former UFC champion’s leg break against Dustin Poirier.McGregor has lost twice to Poirier in 2021, knocked out by the American in the second round in January before suffering a broken leg at the end of the first round in July.The Irishman is expected back in the ring in the first half of 2022, and coach Kavanagh spoke to Submission Radio about his compatriot’s recovery and impending return.“He’s going to be back in the gym, he’s going to be back on the...
UFC・8 DAYS AGO

Ben Askren calls out Nate Diaz for UFC fight: “Would be happy to be the last fight on his contract”

Former UFC welterweight Ben Askren called out Nate Diaz for a UFC fight, saying he “would be happy to be the last fight on his contract.”. Askren retired from the UFC after losing to Jorge Masvidal and Demian Maia citing lingering injury issues. Following his retirement, Askren returned to combat sports in boxing, having been knocked out by Jake Paul earlier this year. Since then, we have not heard much from Askren in regards to fighting again. But it appears as though “Funky” is interested in a return to combat sports, only this time in the UFC, and he has a specific opponent in mind.
UFC・10 DAYS AGO
boxingnewsandviews.com

Recently we covered Amir Khan building a new hospital and a large number of homes in Pakistan. A country the English fighter has heritage of. Now one time pro boxer and UFC star Conor McGregor has followed suit in his country of Ireland it appears. In some positive news surely...
COMBAT SPORTS・7 DAYS AGO
Insider

It drives Conor McGregor 'crazy' that he's no longer one of the boys, and never will be again, UFC fighter says

UFC light heavyweight Anthony Smith believes he knows why Conor McGregor has been lashing out on Twitter at other athletes on the UFC roster.
UFC・11 DAYS AGO
bjpenndotcom

Conor McGregor believes he will be first in line for a 155-pound title shot when he makes his Octagon return in late 2022, and despite the fact that “Notorious” is just 1-3 in the lightweight division, UFC would have no trouble rubber stamping that request. It would probably help if...
UFC・10 DAYS AGO
fcfighter.com

Conor McGregor is coming off back-to-back losses to Dustin Poirier, but that hasn’t stopped the polarizing star from calling for a title shot. The former UFC featherweight and lightweight champ continues to recover from the broken leg he incurred in his rubber match with Poirier, back in July. The injury resulted in McGregor losing the bout via TKO, which followed his stoppage loss to Poirier in January.
UFC・11 DAYS AGO
Yardbarker

Conor McGregor is Looking Huge in his Latest Pics

The former double UFC Champion Conor McGregor is looking absolutely massive as he’s been put through his paces over in Dubai where he is currently training. The Notorious is getting ready to take on rival Dustin Poirier for the fourth time, their last fight was stopped early due to an injury the Dubliner picked up.
UFC・7 DAYS AGO
The Independent

Many fighters mentally visualise key moments in their career, but it is rare for those moments to materialise just as conceived.Ian Garry had a clear design for his UFC debut, so specific that the room for error could have been excruciatingly claustrophobic.But the 24-year-old Irishman displayed precocious composure all throughout fight week this month – still just 23 at the time – both in his expert navigation of interviews and when he stepped foot in the Octagon for the first time. A wave of hype crested on 6 November at Madison Square Garden in New York City, as Garry’s...
UFC・7 DAYS AGO