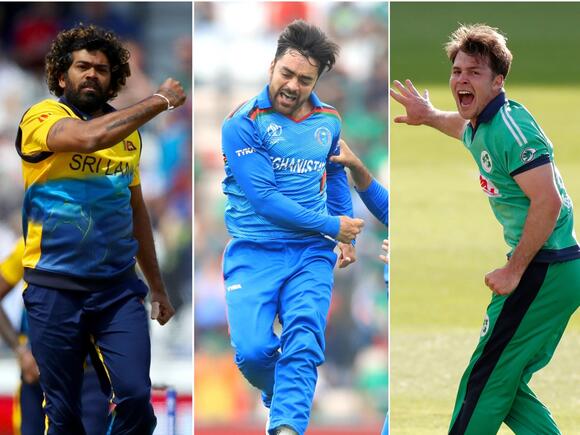 Ireland’s little-known 22-year-old seamer wrote his name into a sport quiz question for years to come when he joined illustrious company with four wickets in successive balls against Holland at the T20 World Cup .

Here, we look at the only three times that feat has been achieved in Twenty20 internationals.

Ireland were on the receiving end of the first four in four when Khan, then the world’s number one-ranked T20 bowler, put paid to their chase of 210 in Dehradun.

Kevin O’Brien was leading Ireland’s reply with 74 until Khan had him caught behind from the final ball of the 16th over, and George Dockrell’s big-hitting cameo was ended by a brilliant boundary catch by Mohammad Nabi from the first ball of the leg-spinner’s next over.

Shane Getkate was stumped next ball and tailender Simi Singh was pinned lbw by a googly as Khan ran riot on his way to final figures of five for 27 in a 32-run win.

Another of the most feared operators of a white ball, Malinga ensured the Black Caps’ pursuit of just 126 in Pallekele was effectively doomed inside three overs.

Having conceded only two runs off his first eight balls, Malinga then bowled Colin Munro with an inswinger for his 100th T20 international wicket – but he was just getting started.

At 15 for four, the game was up and Malinga had Tim Seifert caught at slip in his next over to finish with five for six as New Zealand were dismissed for 88.

Holland had limped to 50 for two from nine overs before South African-born Campher took centre stage in the 10th in Abu Dhabi.

An opening leg-side wide, curiously, gave some indication of the drama to come as Campher’s first wicket required a review, the ball initially signalled wide by Rod Tucker before a DRS review showed the ball had taken the splice of Colin Ackermann’s bat.

Roelof van der Merwe then chopped on to give Campher, in just his fifth T20 international, more wickets than in his previous four combined and another piece of history.

Scotland international Siobhan Cattigan has died aged 26, Scottish Rugby has announced. The back row, who won 19 caps for her country, died on Friday, with her club Stirling describing it as a “tragic passing”. A statement from the governing body read: “Scottish Rugby is deeply saddened to hear Scotland...
WORLD・2 DAYS AGO
Telegraph

The past may be a foreign country but it cannot be as brushed aside, as Azeem Rafiq has discovered. Having given harrowing testimony of the racism he has suffered he has been forced to apologise for his anti-Semitic comments made more than a decade ago. Nevertheless, Rafiq’s testimony to the DCMS still stands and struck many chords with me.
SOCIETY・12 DAYS AGO
The Guardian

Matildas score late to share spoils with US women

A late goal by Kyah Simon has earned Australia a fortunate 1-1 draw against the world champion United States in Newcastle and denied the American women a second win in the two-game series
SAN DIEGO, CA・2 DAYS AGO

Arsenal and Republic of Ireland star Katie McCabe has become the first global athlete for women’s football brand Miss Kick. The company was founded in 2018 when former Manchester City and Liverpool player Grace Vella realised that kit, culture, confidence and credibility were lacking in female sport. Vella spoke to...
SOCCER・10 DAYS AGO
BBC

Kevin O'Brien has been omitted from Ireland's T20 squad for upcoming series against the USA and West Indies. The 37-year-old batter opened for the team during their disappointing World Cup campaign in which they failed to qualify for the Super 12s. Shane Getkate and William McClintock are recalled to the...
PREMIER LEAGUE・7 DAYS AGO
punditarena.com

A brilliant night for UCD. UCD’s Ireland U21 duo Colm Whelan and Liam Kerrigan revelled in their own playoff glory on Friday evening as they condemned Waterford to a stint in the First Division. While Kerrigan grabbed a goal and an assist between them, it was the contribution of the...
SOCCER・5 DAYS AGO
The Independent

The performances of the “very impressive” Nathan Lyon have formed part of Jack Leach’s preparation for the upcoming Ashes series.But the left-arm orthodox spinner, speaking after the second day of England’s warm-up match against England Lions in Brisbane was washed out, has vowed to rely on his own strengths if selected to take on Australia as his side prepares for the first Test at the Gabba.“For years I’ve watched Nathan Lyon and he’s very impressive,” Leach told reporters on Wednesday from the Queensland capital.“Just how strong his stock ball is and on wickets that don’t necessarily offer a lot spin-wise...
SPORTS・1 DAY AGO

Abid Ali fell just shy of back-to-back centuries as Pakistan cruised to an eight-wicket win over Bangladesh in the first Test in Chittagong on Tuesday. "We came back well... and that's what Test cricket is all about," said Babar.
SPORTS・2 DAYS AGO
AFP

England spinner Jack Leach admitted Wednesday that Australian counterpart Nathan Lyon was "impressive" and he had been studying how he deals with local conditions ahead of the first Ashes Test next week. Leach also spotlighted Ravindra Jadeja as an inspiration after the Indian's exploits during a Test series in Australia last summer. "For years I've watched Nathan Lyon and he's very impressive," said Leach, who memorably shared in a final-wicket stand of 76 with Ben Stokes at Leeds in 2019 as England snatched victory from Australia. "Just how strong his stock ball is and on wickets that don't necessarily offer a lot spin wise he's found ways to extract extra bounce, dip and all the other things," he told journalists.
SPORTS・1 DAY AGO
The Independent

Jos Buttler has said the team which best deals with the distractions around the Ashes will win the series as he arrived in England’s camp in Brisbane ahead of the opening Test.The wicketkeeper-batsman joined his team-mates on Tuesday following a period of quarantine on the Gold Coast after the T20 World Cup, with no play expected on day one of the side’s second planned warm-up match against England Lions due to consistent rain in Queensland.Buttler was direct when asked about the difficulties in preparation for both an Australia side recovering from the shock resignation of former skipper Tim Paine and...
SPORTS・2 DAYS AGO
Tennis World Usa

Indian Wells Masters Champion Cameron Norrie has made it clear that his goal is to win the Davis Cup Finals with Great Britain. For the first time in his career, Norrie is Great Britain's No. 1 players at a Davis Cup event. "That is the goal at the end of...
TENNIS・5 DAYS AGO

Can anybody catch Mohamed Salah in PFA Player of the Year race?

Mohamed Salah’s irresistible form rolls on after a sumptuous performance in the derby as Liverpool ran riot against Everton. A runaway leader now for the PFA Players’ Player of the Year, there is now an inevitability about what comes next when the Egyptian forward scampers away from his opponents. Everton...
PREMIER LEAGUE・9 HOURS AGO
The Independent

Ellen White spoke of her pride after breaking England Women’s all-time scoring record in the remarkable 20-0 victory over Latvia in Doncaster.White scored twice early on in the World Cup qualifier at the Keepmoat Stadium to take her level with and then past Kelly Smith’s mark of 46 goals, before adding another effort shortly after the break to complete her hat-trick.The 32-year-old forward, who was making her 101st England appearance, told a press conference after the match: “It feels very nice. I don’t know if you could see it, but it was very emotional on the pitch. I feel very...
UEFA・1 DAY AGO
The Independent

Sports stars and clubs across the world continue to provide an insight into their lives on social media.Here, the PA news agency looks at some of the best examples from December 2.FootballMohamed Salah enjoyed the Merseyside derby pic.twitter.com/HjMrAMKyQa— Mohamed Salah (@MoSalah) December 2, 2021Jordan Henderson sent a message.Merseyside is red. 🔴 pic.twitter.com/Dgh3WW7zfd— Jordan Henderson (@JHenderson) December 1, 2021The excitement was off the chart for James Milner Four goals at Goodison in the derby…and still have my advent calendar to open when I get home 🍫🤤 Carlsberg don’t do Wednesday nights but… 🙌❤️ #Magicmo #whatagoaljots #YNWA pic.twitter.com/TkrbLtNJsf— James Milner (@JamesMilner) December...
PREMIER LEAGUE・7 HOURS AGO
The Independent

Dai Young says Cardiff will “do everything in our power” to play their Heineken Champions Cup games against Toulouse and HarlequinsCardiff have confirmed that a travelling party of 42 players and staff are due to fly out of Cape Town on Thursday.All of that group have returned negative coronavirus tests, but an additional six individuals who tested positive for Covid-19 have been transferred to a South African quarantine hotel.A 10-day period of quarantine on arrival in the United Kingdom means that the 28 players and 14 staff members leaving South Africa can play no part in the European fixtures.Rugby director...
RUGBY・1 DAY AGO
The Independent

Jack Lisowski is taking nothing for granted as he targets a first Triple Crown title at the UK Championship.Tumbling top seeds have left the draw in York wide open, although six-times world champion Ronnie O’Sullivan is safely through to the quarter-finals to leave Lisowski optimistic, but cautious after joining him.Asked if he could go all the way after completing a 6-4 victory over Iran’s Hossein Vafaei to book a last-eight showdown with Zhao Xintong, the world number 15 told BBC2: “Why not?“Every final I’ve had when I’ve done well in tournaments, I’ve had [Mark] Selby [Neil] Robertson, Judd [Trump],...
SPORTS・3 HOURS AGO
The Independent

European Professional Club Rugby has relaxed player registration rules in response to the plight of four sides who found themselves stranded in South Africa but has stressed that there are no spare weekends to accommodate postponements. CardiffMunster the Scarlets and Zebre Parma have all faced difficulties leaving the country after...
RUGBY・8 HOURS AGO