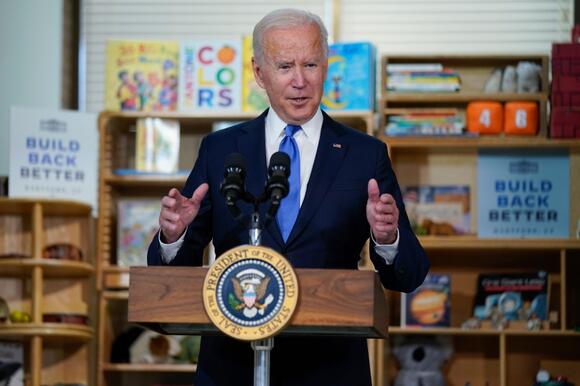 WASHINGTON (AP) — President Joe Biden is entering a crucial two weeks for his ambitious agenda, racing to conclude contentious congressional negotiations ahead of both domestic deadlines and a chance to showcase his administration’s accomplishments on a global stage.

Biden and his fellow Democrats are struggling to bridge intraparty divides by month’s end to pass a bipartisan infrastructure bill and a larger social services package . The president hopes to nail down both before Air Force One lifts off for Europe on Oct. 28 for a pair of world leader summits, including the most ambitious climate change meeting in years.

But that goal has been jeopardized by fractures among Democrats, imperiling the fate of promised sweeping new efforts to grapple with climate change . There’s also rising anxiety within the party about a bellwether gubernatorial contest in Virginia and looming Senate fights over the federal debt limit and government funding that could distract from getting the president’s agenda across the finish line.

Biden is trying to stabilize his presidency after a difficult stretch marked by the tumultuous end of the Afghanistan war , a diplomatic spat with a longtime ally and a surge in COVID-19 cases that rattled the nation’s economic recovery and sent his poll numbers tumbling .

His team has continued its strategy — one that served it well during the campaign and earlier this year — of blocking out the outside noise to stay focused on a singular mission, this time to pass the two-part package that will give Democrats a platform on which to run in next year’s midterm elections.

“These bills, in my view, are literally about competitiveness versus complacency, about opportunity versus decay, and about leading the world or continuing to let the world move by us,” Biden said Friday while pushing the legislation in Connecticut.

Yet beneath the White House’s pleas for patience — reminding people that hard things take time — is a bubbling sense of urgency that a deal needs to be struck rapidly.

For the White House, there are the explicit target dates, including an end-of-month deadline on transportation funding and Biden’s upcoming foreign trip. But there are also more abstract imperatives: proving Democrats can deliver on their promises to voters and protecting Biden’s waning political capital.

With new urgency, the administration has sent signals to Capitol Hill in recent days that it is time to wrap up negotiations, that a deal needs to be reached, according to two White House officials who spoke on condition of anonymity because they were not authorized to publicly discuss private conversations. Biden himself has expressed impatience and will be increasing his own personal outreach this week to push lawmakers to find a compromise and bring the bills to a vote, the officials said.

West Wing officials are still optimistic that an agreement will ultimately be struck, but there are also fears that the messy, drawn-out negotiation has clouded the tangible benefits of what Biden aims to deliver to voters.

Biden sought to address some of that when he traveled to Hartford, Connecticut, last week to showcase initiatives to sharply reduce the cost of early childhood care — perhaps one of the only pieces of the legislation that is a lock to make the final package.

Even Democratic leaders are divided on the best way to shrink the overall price tag of the package in order to win over more votes. Biden said Friday he prefers including all of the wish-list proposals, but trimming down the length of the programs to cut costs. His thinking is that a future Congress can vote later to extend programs that the American people will find popular.

But days earlier, House Speaker Nancy Pelosi suggested the opposite tack — approving a narrower set of programs to last for a longer time period.

Some Democrats have pushed for passing the bipartisan infrastructure deal by Oct. 31 even if the larger social services package is not settled, a move many progressives dislike because they could lose leverage for the latter bill.

The fate of climate change provisions is particularly perilous.

West Virginia Sen. Joe Manchin’s objections to a program aimed at speeding the nation’s transition away from fossil fuels threatens the heart of Biden’s plans to combat climate change just before he tries to assert American leadership on the issue at the upcoming global conference in Scotland.

The Democrats’ razor-thin margins in both houses of Congress have empowered individual lawmakers like Manchin and Arizona Sen. Kyrsten Sinema, vexing fellow lawmakers and the White House. White House aides have not abandoned the clean energy program but are exploring alternate means to string together a mix of policies to cut emissions, officials said.

Abandoning the provisions could wound Biden in Glasgow, at a summit that the administration has held out as a vital opportunity not just to combat climate change but to reassert U.S. leadership on the issue after four years of retrenchment under President Donald Trump. The United States will be bringing a major footprint to the gathering — including former President Barack Obama — but it risks falling behind European nations that have taken more concrete steps to cut emissions.

Biden’s stop in Scotland early in November will follow his participation in a summit of world leaders in Rome. But Chinese President Xi Jinping’s decision to skip the gatherings — delaying the first meeting between the leaders of the two superpowers — could diminish their relevance. Still, Biden is expected to meet in Italy with French President Emmanuel Macron as the men look to repair relations after a U.S. submarine deal with Australia scuttled a French contract and led the French to briefly withdraw their ambassador from Washington.

Also looming is the Nov. 2 gubernatorial election in Virginia, which is regarded as a referendum on Biden and the Democrats’ chances of retraining control over Congress next year.

Terry McAuliffe, who previously served as the state’s governor, is locked in a closer-than-expected race with Republican businessman Glenn Youngkin in a state that Biden won by 10 points last year.

McAuliffe has been surprisingly public in his criticism of the administration’s legislative strategy, urging Democrats to pass the infrastructure bill before Election Day to give him something to show voters. White House officials privately expect McAuliffe to emerge with a narrow win and believe they can ignore worries about a smaller-than-expected margin of victory.

But a tight outcome, or a Youngkin win, could rattle Democrats uncertain about Biden’s political coattails — potentially making them less likely to take risky votes for his agenda — and would buoy Republicans heading into the midterms.

A photo of a billboard insulting the President and Vice President has left the internet divided.
PRESIDENTIAL ELECTION・20 HOURS AGO
Newsweek

At the current COVID-19 death rate, the number of American lives lost under Biden could exceed those under Trump in a few weeks.
PRESIDENTIAL ELECTION・17 HOURS AGO
Markets Insider

President Joe Biden’s job approval rating is in free fall – and it’s not just Republicans saying so. A recent USA TODAY/Suffolk Poll found 59% of voters disapprove of Biden’s job performance, while Vice President Kamala Harris’ approval rating sits at an embarrassing 28%. A stunning 46% of those surveyed believe Biden is doing a worse job as president than expected, including 16% who supported him at the ballot box last year.
PRESIDENTIAL ELECTION・23 HOURS AGO
POLITICO

The party's own polling has the president in the red. Lawmakers know they need to get better at selling his agenda to avert midterm disaster.
PRESIDENTIAL ELECTION・20 HOURS AGO
UPI News

Dec. 6 (UPI) -- Senate Democrats pushing President Joe Biden's nearly $2 trillion spending bill began negotiations with Parliamentarian Elizabeth MacDonough on what can be considered under budget reconciliation. In an effort to escape a Republican filibuster over the massive social spending and climate bill, Democrats must convince MacDonoough that...
CONGRESS & COURTS・15 HOURS AGO

If Congress fails to step in, 9 million kids could either slip below poverty line or fall deeper into poverty.
PRESIDENTIAL ELECTION・12 HOURS AGO
POLITICO

Biden’s plan for a ‘no drama’ December

It’s a long December and Biden wants reason to believe that maybe this month will have less drama than the last.
PRESIDENTIAL ELECTION・18 HOURS AGO
The Guardian

Despite every effort of the Biden administration, the Justice Department, the congressional Democrats and the propaganda media, Hunter Biden is going to end up being investigated – and the impact on President Joe Biden, his administration and his legacy is going to be enormous. As more stories about Hunter Biden’s...
U.S. POLITICS・1 DAY AGO
WashingtonExaminer

To Josh Mandel, 'squishy RINOs' bigger problem than Biden and the Democrats

Republican Josh Mandel’s strategy for restoring America from the supposed malaise of President Joe Biden has little to do with purging Democrats from power.
U.S. POLITICS・23 HOURS AGO
WFLA

Democrats still must solve other disagreements, including over how to let people deduct more state and local taxes without making the provision a giveaway to the richest Americans. And there are other factors running out the clock.
PRESIDENTIAL ELECTION・14 HOURS AGO
WashingtonExaminer

A fight to block the Biden administration’s COVID-19 vaccine mandates is far from over in the Senate even though lawmakers voted against a measure that would have stopped the mandate.
U.S. POLITICS・1 DAY AGO

The former president's statement prompted sarcastic comments on social media from a range of his detractors.
PRESIDENTIAL ELECTION・2 DAYS AGO
Denton Record-Chronicle

WASHINGTON — Congress struck a deal Thursday night to keep the government open through February, after overcoming a threat from Sen. Ted Cruz and a few allies to force a shutdown unless funds for a vaccine mandate were cut off. Federal courts have blocked the mandate, which is aimed at...
CONGRESS & COURTS・3 DAYS AGO
Fox News

Sparks flew on the set of ABC's "The View" Friday as co-hosts clashed over President Biden's decision to restart the Trump-era "Remain in Mexico" policy. During a segment discussing Biden's decision, co-host Ana Navarro butted heads with Sunny Hostin and guest host America Ferrera over the policy, with the latter two excoriating Biden for breaking his campaign promise to end it, and the former arguing that the policy discouraged people from attempting to make the dangerous journey to the southern U.S. border.
PRESIDENTIAL ELECTION・3 DAYS AGO
The Independent

‘This is getting ridiculous’: AOC and progressive lawmakers urge Biden to act on ‘crushing’ student debt

Progressive lawmakers took to the floor of the House of Representatives on Thursday to demand President Joe Biden cancel student loan debt, which has ballooned to more than $1.8 trillion held among 45 million Americans.Payments on federal student loans have been paused with interest rates set to zero per cent with passage of coronavirus relief legislation in March 2020. That pause was repeatedly extended, but it will come to an end in January 2022, following nearly two years of dramatic financial relief for millions of Americans during the public health crisis and its economic fallout.Most of that outstanding debt...
EDUCATION・3 DAYS AGO