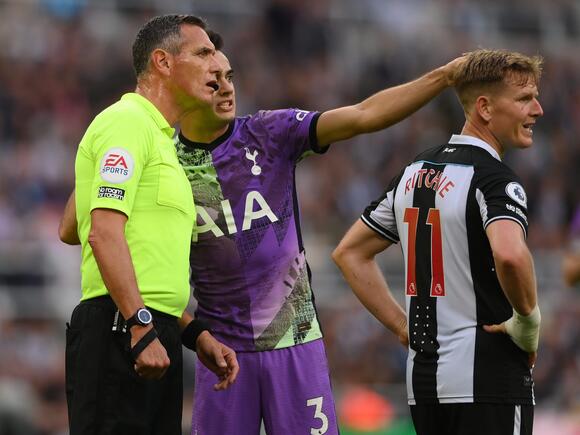 Two Tottenham Hotspur players may have helped save a fan's life after the supporter collapsed in the stands.

Spurs were away at Newcastle United when in the 40th minute, fans started calling for help amid a medical emergency in the crowd.

The calls were heard by Tottenham full back Sergio Reguilón, who got the attention of referee Andre Marriner.

Another Spurs player, Eric Dier, also sprang into action and rushed to the benches so that a defibrillator could be brought to the fan.

The match was suspended for 20 minutes while the supporter received help. He regained consciousness before being taken to hospital nearby.

Reguilón said he spotted fans waving and a man lying down.

"I saw something wrong had happened. I looked at the gaffer and he stopped the match," he told BBC Sport.

"I think now everything is OK and 100% happiness.

"It was very strange. We went to the dressing room and I was looking at the man lying down.

"I was nervous because I don't like to watch that."

In a statement , Newcastle thanked the fans who performed life-saving CPR.

"The club would like to thank fans for their swift actions in raising the alarm and praise those who provided immediate chest compressions, as well as thanking the on-site medical professionals who swiftly administered emergency treatment using a defibrillator located close to the incident.

"Our best wishes go to the supporter and their loved ones and we hope for a swift and full recovery."

One of the fans who helped save the man's life was an accident and emergency doctor who was called from his seat to help.

"It's something you see at work fairly often but I haven't really had this outside of the hospital before," Tom Prichard told BBC Breakfast.

"There was an elderly gentlemen lying on the seats in cardiac arrest with CPR ongoing. Luckily St John [Ambulance] were fairly quick. We got the [defibrillator] pads on quickly.

"We gave the guy a shock. He was quite fortunate, this guy, because very quickly an intensive care doctor arrived, a cardiologist arrived and we were able to bring him back again."

The incident came during the first match since Newcastle's takeover by a consortium led by Saudi Arabia's state investment fund, a deal that has raised questions about elite soccer's moral and ethical responsibilities.

The home side's Callum Wilson opened the scoring in the second minute but Tottenham hit back three times before half time to gain control of the match.

Spurs' third, scored by Son Heung-min, came after the resumption of play following the supporter's collapse.

Newcastle's Jonjo Shelvey was sent off in the 83rd minute, before an Eric Dier own goal in the 89th minute gave Newcastle some hope. The game, however, ended 3-2 to Tottenham.

The result leaves Newcastle as one of three teams without a win in the Premier League this season. The team sits 19th out of 20.

Clockwatch: There were wins for Arsenal, Liverpool and Aston Villa, while Norwich and Wolves play out scoreless draw at Carrow Road
PREMIER LEAGUE・5 HOURS AGO
The Guardian

Eddie Howe will be in the Newcastle United dugout for the first time when they head for Arsenal on Saturday after recovering from his bout of Covid-19.The 43-year-old, who tested positive for coronavirus on the eve of his first game in charge against Brentford, returned a negative test on Friday morning.He will be allowed to resume his role as the Magpies’ new head coach with his symptoms having been traced back to earlier last week.Assistant Jason Tindall has revealed his long-time friend was unwell at the beginning of this week, but has improved significantly since.Tindall said: “You’re always worried when...
SOCCER・1 DAY AGO
The Independent

Tottenham boss Antonio Conte is enjoying being back in the Premier League despite the situation he inherited at his new club.Conte laid bare just how big a job he has on his hands after Spurs’ European embarrassment in midweek, where they lost to Slovenian minnows NS Mura – the lowest ranked team in the Europa Conference League.Conte was forced to admit after the humiliation that the level of his squad is “for sure not so high” and that he has reservations over its limitations.The Italian chose to return to the Premier League four years after he was sacked at Chelsea...
PREMIER LEAGUE・12 HOURS AGO

Liverpool crushed Southampton 4-0 on Saturday to put pressure on Premier League leaders Chelsea as Arsenal got back on track with victory over Newcastle to hand Eddie Howe his first defeat as Magpies manager. Steven Gerrard made it two wins out of two as Aston Villa boss with a 2-1 win at Crystal Palace while the matches between Norwich and Wolves and Brighton and Leeds both ended goalless. Diogo Jota scored twice for Jurgen Klopp's Liverpool -- including one goal after just 97 seconds -- to warm the Anfield faithful on a bitterly cold afternoon on Merseyside. Liverpool's third consecutive victory in all competitions since losing at West Ham lifted them to second in the table, one point behind Chelsea, who host Manchester United on Sunday.
PREMIER LEAGUE・2 HOURS AGO
The Guardian

Minute-by-minute report: Brighton created plenty of chances, but a lack of cutting edge cost them yet again, the same old story at the Amex. Scott Murray was watching.
PREMIER LEAGUE・3 HOURS AGO
The Guardian

West Ham, Leicester and Rangers all secured victories but Celtic went out of the Europa League
PREMIER LEAGUE・2 DAYS AGO
Yardbarker

A Ligue 1 football game between Lyon and Marseille was abandoned after former West Ham player Dimitri Payet was hit on the head by a water bottle thrown from the stands. Footage filmed by a fan in the stand captured the Marseille forward preparing to take a corner in the fifth minute when a bottle is thrown towards him, hitting him on the head.
SOCCER・5 DAYS AGO
SPORTbible

"I Haven’t Had A Call Yet!" - Manchester United Legend Confirms He Will NOT Be New Manager

Former Manchester United ace Mark Hughes has ruled himself out of taking over at Old Trafford, following the sacking of Ole Gunnar Solskjaer. The former Manchester City and Blackburn Rovers manager hasn't had a job in football since his ill-fated nine-month spell at Southampton back in 2018. Prior to that,...
PREMIER LEAGUE・4 DAYS AGO
Channel 3000

Bryan Habana: Springboks great says he would have taken the knee as a player if he had the opportunity

While South Africa’s rugby team has decided not to take a knee before games, former Springbok Bryan Habana says he would have done so if he had the opportunity during his playing days. Male and female rugby players at club and international level chose to take a knee in support...
NFL・8 DAYS AGO
Daily Mail

Wigan striker Charlie Wyke, 28, is in a stable condition after he was rushed to hospital having collapsed in training ahead of Tuesday's trip to Cambridge

Wigan striker Charlie Wyke is in hospital after collapsing during training earlier this week. The 28-year-old was taking part in a session ahead of the League One side’s 2-2 draw at Cambridge United and continues to be monitored. Wyke is the third player in recent days to have problems while...
SOCCER・2 DAYS AGO

Premier League clubs should pay a transfer “stamp duty” to support the English pyramid, the fan-led review of football governance has recommended.The wide-ranging review commissioned by the government has, as expected, called for the creation of an Independent Regulator for English Football (IREF).It says this should be created via an Act of Parliament to ensure the financial sustainability of the men’s professional game.The review has also recommended the granting of “golden share” veto powers to supporters’ groups on key issues such as clubs attempting to enter breakaway competitions, moving stadium or changing club colours.However, arguably the most surprising and eye-catching...
UEFA・2 DAYS AGO
The Independent

Sheffield United are set to announce the departure of manager Slavisa Jokanovic after just six months in the role, the PA news agency understands.The Blades, relegated from the Premier League last season, sit 16th in the Sky Bet Championship table and Jokanovic’s exit is expected to be confirmed on Thursday.Jokanovic, 53, became the Blades’ first overseas manager in May when installed as Chris Wilder’s permanent replacement.The Serbian won promotion to the top flight with his previous English clubs Watford and Fulham, but has won only six of his 19 league games since taking over at Bramall Lane.The Blades won their...
PREMIER LEAGUE・2 DAYS AGO
The Independent

West Ham waltzed into the last 16 of the Europa League with a game to spare after a 2-0 victory at Rapid Vienna.First-half goals from Andriy Yarmolenko and Mark Noble wrapped up top spot in Group H for David Moyes’ side.It was an important victory for the Hammers as they are now straight through to the knockout stage having avoided a play-off in February against a team dropping down from the Champions League.Moyes was even able to make eight changes to his side, resting the likes of Declan Rice and Michail Antonio, and still comfortably get the job done.With Vienna...
UEFA・2 DAYS AGO
The Guardian

A new documentary captured the moment Cristiano Ronaldo berated his teammates at half time during a game. Annoyed that his team was losing, Ronaldo yelled "what the fuck," and said they "played shit." Ronaldo then got involved in an argument with a teammate and had to be calmed down by...
PREMIER LEAGUE・1 DAY AGO
San Diego Union-Tribune

Imposing a transfer levy on Premier League clubs to further support the football pyramid risks “killing the golden goose”, according to Aston Villa chief executive Christian Purslow The fan-led review of football governance, among other recommendations, proposed a “stamp duty” of up to 10 per cent on deals between top-flight clubs or signings from overseas to help safeguard the financial stability of the lower divisions.The Premier League broadly welcomed the review and will examine all the proposals moving forward – but also issued a warning over any wide-sweeping reforms which ultimately damage the game’s standing.The PL welcomes the publication of...
PREMIER LEAGUE・2 DAYS AGO