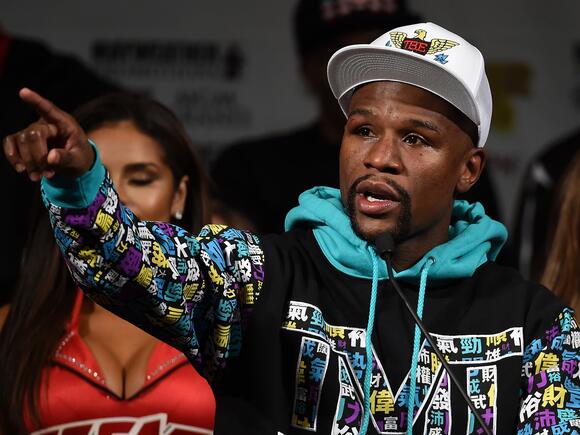 A former welterweight world champion and Olympic champion, Breland was made the fall guy following Fury’s seventh-round knockout win over Wilder in 2020.

The Bronze Bomber was furious at Breland for throwing in the towel to end the contest, though many leaped to the support of the 58-year-old for prioritising his fighter’s wellbeing.

Mayweather wrote on Instagram: “Please hit the follow button if you want to follow a humble student, teacher, mentor, and coach in the sport of boxing.

“He has all the credentials and qualifications to support why I recognise him as an elite boxing coach, something that nowadays many unqualified people claim to be.” 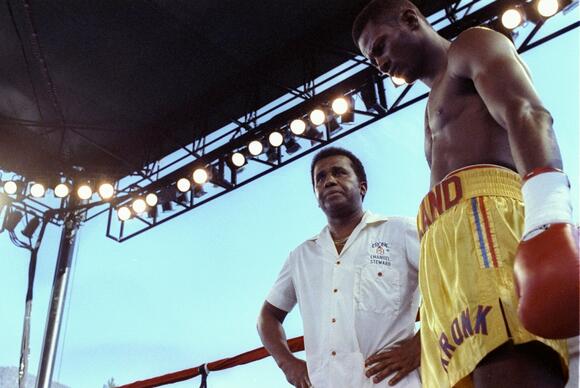 While the legendary Sugar Ray Leonard concurred with Mayweather’s praise, adding: “Mark, I wish you well my man as I’ve always been proud of you as a fighter, boxing trainer and man!”

Wilder also publicly criticised Breland’s training methods in the build-up to the third fight, praising his new trainer Malik Scott in the process.

“It’s just amazing to have Malik in the camp with me. We just bring the best out of me,” Wilder told 78SPORTSTV .

“Before, having my other trainer, all he worked on was the one-two.

“We never emphasised on anything else. He always said, ‘That’s all you need, one-two, one-two.’

“But with Malik, he brings everything out of me. It’s not that I didn’t have the skill and ability to do certain things, I just didn’t have no-one to bring that out of me.”

Breland appeared to mock those comments following the third fight, where Wilder was knocked out in the 11th round, posting a video of himself shadow boxing, demonstrating a series of one-twos alongside smooth footwork.

1,2 1,2 well that's all Wilder was capable of doing, when you swing for the fences every time, this will be the end results.

Floyd Mayweather Jr. is back with his ex girlfriend Gallienne Nabila, and the couple were spotted enjoying a date night in Los Angeles at a Lakers game. Floyd Mayweather proved his rekindled romance with model girlfriend Gallienne Nabila was going strong when the pair sat courtside at the Houston Rockets and Los Angeles Lakers game on November 2. The boxer, 44, put his unique fashion sense on display in a black sweater featuring a white graphic print, along with ripped black jeans and black leather boots. His on again/off again girlfriend Gallienne, 24, stunned in a black, scoop-neck long sleeved top along with tight leather pants and strappy gold pumps. She accessorized her fit with gold necklaces and rings, as she styled her raven tresses in loose waves.
LOS ANGELES, CA・29 DAYS AGO
dexerto.com

Boxing legend Floyd Mayweather has revealed new details about his fight with Logan Paul that may cast doubt on the YouTuber’s real ability in the ring. The exhibition match between Logan Paul and Floyd Mayweather was quite the spectacle. With neither combatant scoring a KO, the fight went the distance and no winner was declared.
COMBAT SPORTS・13 DAYS AGO
punditarena.com

Tyson Fury has said that it is ironic that Anthony Joshua believes Deontay Wilder was unable to beat him as he lacks fighting intelligence. Wilder was unsuccessful in his attempt to beat Fury at the third time of asking last month, as the British heavyweight scored a knock out victory in the 11th round.
COMBAT SPORTS・6 DAYS AGO
Boxing Insider

Back in 2013, Floyd Mayweather battled Canelo Alvarez in what was one of the most lucrative fights in history. Mayweather was already a legend. Canelo, on the other hand, was a fighter on the rise. And, while Canelo was certainly game, his lack of experience – coupled with Mayweather’s iconic skill set – led to his first and only defeat. Since that time, of course, Mayweather has – professionally, at least – ridden off into the sunset while Canelo has taken the mantel as the sport of boxing’s biggest name. Now the red haired star is in line to shockingly gun for a cruiserweight title after just having unified the super middleweight division. Mayweather weighed in on his former foe this week in Mexico for the WBC’s 2021 Convention.
COMBAT SPORTS・14 DAYS AGO

Though he hasn’t officially fought in roughly five years, Floyd Mayweather still pays close attention to the current group of fighters. During his prime, Mayweather found his name at the very top of virtually every pound for pound list. As the newly inducted Hall of Famer gazes upon every weight class and every current world champion, he believes he knows who has usurped him as the best fighter in the world.
COMBAT SPORTS・8 DAYS AGO
worldboxingnews.net

Gilberto Ramirez stands just eight wins from the exceptional Floyd Mayweather record of 50-0, but the dangerous Mexican can’t land a world title fight. “Zurdo” is on the path to greatness. That’s if he can land the correct opponents. However, it’s not that easy. Now, he’s frustrated by light-heavyweight ruler Dmitry Bivol’s silence.
COMBAT SPORTS・14 DAYS AGO
worldboxingnews.net

Deontay Wilder was in good enough form against Tyson Fury last month to go straight into a high-profile Pay Per View with Andy Ruiz Jr. That’s the view in the aftermath of witnessing one of the best heavyweight battles of recent years at the T-Mobile Arena in Las Vegas. WBN...
LAS VEGAS, NV・3 DAYS AGO
SkySports

Tommy Fletcher 'has Deontay Wilder's power but with more in-ring IQ' and says: 'My power is natural. You can't teach power'

Tommy Fletcher has been touted as having the same punch power as Deontay Wilder and has insisted "I can’t argue with that". The 6'7'' teenage southpaw has developed a reputation for his hard-hitting style ahead of his professional debut. "He's got the power of Deontay Wilder, but he's got the...
COMBAT SPORTS・1 DAY AGO

While we approach the Christmas season, Thanksgiving offers everyone a chance to get together with their families, enjoy a nice meal, and a couple of drinks. It's an excellent break from everyone's busy schedule, especially as the holidays come around. Floyd Mayweather appears to be having an excellent time this...
NBA・5 DAYS AGO
Sportsnaut

Tyson Fury has revealed he drank two pints of beer before fighting Deontay Wilder in their first clash back in 2018.The Brit agreed to fight the concussive puncher just six months after returning to the ring following three years out.But prior to the heavyweight showdown - which would end in a controversial draw - Fury has admitted he allowed himself to relax with some alcohol at the bar.Speaking to JOE, he said: “I’ve got that old school mentality. Before Wilder 1 I went downstairs and two pints because I felt like it. It didn’t do me any harm, did...
COMBAT SPORTS・3 DAYS AGO
Boxing Scene

A battle between two former heavyweight champions could be on the horizon. Andy Ruiz Jr. is open to fighting Deontay Wilder, he told The Last Stand with Brian Custer. “Yes, I do, and I think that would be an amazing fight,” said Ruiz in regard to a future fight. “We’re both part of the same team [with Al Haymon’s Premier Boxing Champions], and it’s all business. I wouldn’t mind getting in the ring with him, and I feel I could beat him. We got to get it on.”
COMBAT SPORTS・10 DAYS AGO

Former long-reigning champion Deontay Wilder has retained his place at the top of the WBC heavyweight rankings for a further month. The latest list, confirmed after the WBC Convention, sees Wilder top of the pile despite losing to current ruler Tyson Fury a second time. DEONTAY WILDER. Wilder put on...
DEONTAY WILDER・1 DAY AGO
fightsports.tv

Floyd Mayweather knows who Saul “Canelo” Alvarez’s next test could be. Mayweather, a five-division world champion, said David Benavidez is “a helluva fighter” and thinks that matchup would be good. “We like Canelo Alvarez, but Gervonta Davis, Errol Spence, Terence Crawford – there are so many other great fighters out...
COMBAT SPORTS・8 DAYS AGO
ClutchPoints

Boxing legend Floyd Mayweather Jr. is certain that WBO welterweight champion Terence Crawford is the best there is at the moment. Saul “Canelo” Alvarez has had a remarkable run this year, having made himself an undisputed champion after stopping Caleb Plant. However, for his former foe Floyd Mayweather Jr., it wasn’t enough to be hailed “pound-for-pound” best.
COMBAT SPORTS・8 DAYS AGO
worldboxingnews.net

Gilberto Ramirez wants to win a light-heavyweight title on the way to breaking boxing legend Floyd Mayweather’s coveted 50-0 record. The Golden Boy star, who is eight wins from equalling the benchmark, faces Yunieski Gonalez later this month. A victory will mean a potential shot at WBA ruler Dmitry Bivol in the first half of 2022.
COMBAT SPORTS・7 HOURS AGO
hotnewhiphop.com

Iyanna "Yaya" Mayweather is currently facing a potential 20 years behind bars for her alleged stabbing of NBA YoungBoy's baby mother Lapattra Jacob, but that isn't stopping her from spending precious time with her and NBA YoungBoy's newborn baby, Kentrell Jr. The young couple welcomed their first child together at...
NBA・8 DAYS AGO
fightsports.tv

Deontay Wilder Speaks For The First Time Since Knockout Loss Vs. Tyson Fury

Deontay Wilder doesn’t plan on stepping away from boxing, he’s just waiting for his broken hand to heal. Last Wednesday, Wilder sat down with his fiancé, Telli Swift, and gave an update for the first time since his trilogy loss to WBC heavyweight champion Tyson Fury. “Once this is over,...
COMBAT SPORTS・5 HOURS AGO
worldboxingnews.net

Talk of the United Kingdom’s version of Floyd Mayweather vs. Manny Pacquiao in the first quarter of 2022 is filling the air this weekend. Amir Khan vs. Kell Brook, the most prolonged drawn-out fight in recent British boxing history, may finally be on the cards for February. Talks have taken...
COMBAT SPORTS・5 DAYS AGO
BoxingNews24.com

Deontay Wilder upbeat about loss to Tyson Fury: “The best is yet to come”

By Charles Brun: Former WBC heavyweight champion Deontay ‘Bronze Bomber’ Wilder remains upbeat about his future despite getting stopped for the second consecutive time by ‘The Gypsy King’ Tyson Fury on October 9th. What’s disappointing about Deontay’s latest loss to Fury is that he arguably should have won the fight.
COMBAT SPORTS・6 HOURS AGO