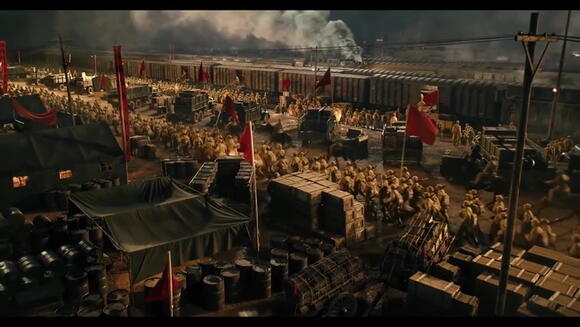 The film has also surpassed the box office earnings of Daniel Craig ’s last Bond film, No Time To Die.

The Chinese film showcases the Battle of Chosin Reservoir during the Korean War and is set to become China ’s highest-grossing film ever.

The film’s success is great news for China’s film sector, which took a hit during the pandemic.

Earlier this year, the Chinese authorities ordered the country’s cinemas to utilise the power of the box office to promote positive messages about the ruling Communist Party.

It comes as part of a drive from Beijing to inspire a younger generation to “grow their affections” for the Party and for socialism as their parents did – by watching the same old propaganda films.

A Chinese propaganda movie depicting the defeat of the US Army has become the country’s highest-grossing film of all time. The three-hour-long war epic, “The Battle at Lake Changjin,” has made a whopping $892 million in the communist country since it was released there on Sept. 30. It has now...
MOVIES・2 DAYS AGO
411mania.com

It was a second weekend in a row atop the box office for Marvel’s Eternals, which posted a fairly solid hold all things considered. The latest MCU film brought in $27.5 million in its second frame to win the weekend. That number is down 61% from its $71.3 million opening weekend.
MOVIES・13 DAYS AGO
Showbiz411

More good news, bad news, this time for Warner Bros. “Dune,” which I think is a Best Picture nominee with many more nods as well, has finally reached Nirvana. Denis Villeneuve’s sci-fi opera hit $100 million overnight and is at $100,877,000. Everyone can relax now. Total time was 36 days. And it was a nail biter. But “Dune” has persevered especially since it was shown on HBO Max for much of that time. Bravo to all involved.
MOVIES・19 HOURS AGO
flickeringmyth.com

Clifford nips at the heels of Eternals at the U.S. box office as Bond passes $700 million worldwide

Following the Day and Date success of Halloween Kills, it was another pedigree performance for Paramount+ with their dual release strategy at the U.S. box-office as Clifford the Big Red Dog snapped at the heels of Marvel’s Eternals solid sophomore frame. We might have called it “a brown stinker” in...
MOVIES・13 DAYS AGO

Venom: Let There Be Carnage overtakes Shang-Chi at box office to be 1st superhero movie of the year (so far)

If the context of the health crisis surrounding the release of comic book adaptations in 2021 prevents reasonable comparisons of the box office figures of the “world before”, since it seems clear that many films will no longer be able to make the 800 M $ (or even 1 billion) as easily as before, the race between the long films released this year were quite tight for some.
MOVIES・13 DAYS AGO
epicstream.com

Shang-Chi and the Legend of the Ten Rings is notably absent in the Chinese theatrical market due to star Simu Liu's past comments that criticized the country. Due to the controversy, the film is not expected to be released in the country anytime soon (or ever). With the film now being available on Disney+, it sparked yet again another major controversy in the country.
MOVIES・11 DAYS AGO
Showbiz411

Good news for “Belfast.” Kenneth Branagh’s Oscar buzzed film started its Oscar March with $1.8 million in limited release. Word of mouth must be excellent since the poignant memoir of Northern Ireland’s “troubles” had a per theater average of over $3,000. “Belfast” boasts stand out performances from all its stars...
MOVIES・13 DAYS AGO
sfrichmondreview.com

‘I feel represented’: What San Francisco-based “Shang-Chi” means for Asian Americans of the City. Beginning with its Sept. 3 opening, “Shang-Chi and the Legend of the Ten Rings” earned the attention of audiences, grossing nearly $250 million in its first two weeks and setting Labor Day opening records during the debut weekend. A landmark in mainstream American media, the film also boasted a nearly all-Asian cast.
SAN FRANCISCO, CA・9 DAYS AGO

It’s official, James Bond’s latest film, “No Time To Die,” has become the highest grossing film of 2021. It surpassed “F9” by adding $2.7 million to its nearly $730 million dollar gross over the weekend. A sure sign of the franchise’s healthy prospects as it turns its page on the Daniel Craig era.
MOVIES・5 DAYS AGO
Den of Geek

Someone at Sony today could quite possibly be ringing a bell and shouting, “We got one!” because Ghostbusters: Afterlife’s opening weekend suggests there’s life in the old franchise yet. Indeed, the fourth movie about ghosts and the people who catch them, and third picture set in the original 1984 movie’s continuity, has beaten both Sony and competitors’ expectations, and looks poised to open at a respectable $44 million.
MOVIES・6 DAYS AGO
Gamespot

With Shang-Chi and the Legend of the Ten Rings now digitally released, a few features have been released as well. And in one of the deleted scenes for the film, Razor Fist (Florian Munteanu) dies. This is a bit of a contradiction as to what happens in the post-credit sequence as he stands by Xialing's side.
MOVIES・5 DAYS AGO
Polygon

Daniel Craig is leaving James Bond on top. Audiences have poured into theaters for Craig’s fifth and final performance as the super-spy in No Time to Die, which over the weekend became the highest-grossing Hollywood movie of 2021 with a total of $734,091,693, according to industry tracking site The Numbers. Currently, it’s outgrossed by two Chinese movies: the war epic The Battle at Lake Changjin and Hi, Mom, a time-traveling family comedy, but still stands as the biggest new release at the North American box office since the beginning of the COVID-19 pandemic.
MOVIES・5 DAYS AGO

While the Thanksgiving box office will wind up totaling far less than previous years’ holidays, there were still plenty of viewers to go around between the weekend’s offerings. Disney’s “Encanto” will top the domestic box office for the weekend, while MGM’s “House of Gucci” has become one of the first adult dramas to draw a substantial theatrical audience during the pandemic era. Disney’s “Encanto” had been projected to lead the box office heading into the holiday weekend. The animated adventure took in $11 million on Black Friday from 3,980 locations and is headed towards a $43.3 million five-day total. That’s a far...
MOVIES・19 HOURS AGO
Fortune

Subscribe to Fortune Daily to get essential business stories straight to your inbox each morning. A Chinese war epic, The Battle at Lake Changjin, has topped global box office rankings as the highest-grossing film of 2021, collecting $890 million in ticket sales since its release on Sept. 30 and, according to Global Times, has ousted 2017’s Wolf Warrior 2 as the highest grossing film in China ever.
MOVIES・3 DAYS AGO
Variety

‘Revolution of Our Times,’ ‘The Falls’ Triumph at Golden Horse Film Awards

“The Falls,” Taiwan’s Oscar contender and a timely drama about the trauma of home quarantine, emerged as the unsurprising winner at the Golden Horse Film Awards in Taipei on Saturday. And, in a bold decision that has the potential to enrage Mainland Chinese authorities, the prize for best documentary feature was awarded to “Revolution of Our Times.” The film chronicles the brutality of the political crackdown on the streets of Hong Kong in 2019 and 2020. “The Falls,” which debuted at the Venice Film Festival in September, tells the tale of a mother and daughter cooped up in an apartment during a...
MOVIES・9 HOURS AGO