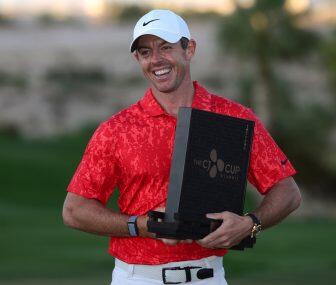 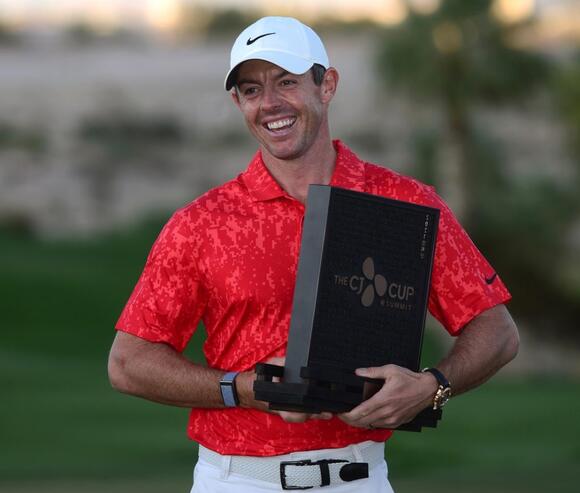 Rory McIlroy converted an eagle putt from off the 14th green Sunday and held on for a one-stroke win at the CJ Cup at Summit in Las Vegas.

The four-time major champion from Northern Ireland posted a final-round 6-under 66 to go 25 under over four days. Collin Morikawa eagled the last hole for a 10-under 62, coming up just shy for second place at 24 under.

It was McIlroy’s second win of the calendar year and his 20th career PGA Tour victory.

“To get to 20 wins out here is a big achievement,” McIlroy said. “Yeah, I mean, I didn’t know if it was going to be this week, but I knew if I just kept my head down and kept playing well and doing the right things, eventually I’d get there.”

Playing in the final pairing with 54-hole leader Rickie Fowler, McIlroy made five birdies and one bogey before reaching No. 14, a par 5. His second shot landed short of the green, but he used his putter to sink an uphill 35-footer.

“I never really saw it as a chip, I saw it as a putt,” McIlroy said. “There wasn’t much break in it actually. The only thing I needed to do was get the speed right and just try and judge what it was going to do coming through that first little bit of fairway. And it came out really nice. It grabbed the hole, or the hole grabbed the ball maybe is a better way of putting it.”

McIlroy — who posted a 62 Saturday to shoot up the leaderboard — was playing his first competitive golf since last month’s Ryder Cup, where Team USA spanked his European side 19-9. He said he had done some reflecting since that week.

“I felt like I started to work on the right things on my game,” he said. “I didn’t think that it would translate into a win this quickly, but I’m thankful that it did.”

Morikawa, the No. 3 player in the world, was considered the favorite entering the week because The Summit Club is his home course. That local knowledge proved useful Sunday, as he made seven birdies on the front nine to go out in 29 and made eagle on the par-5 18th by landing his second shot inside 7 feet of the pin.

“I was actually trying to land it just short of the ridge, but we knew if I flushed a 4-iron and I got some height on it, it would stop,” Morikawa said. “It was just exactly pretty much how we planned out. Always nice to finish on a couple good swings.”

Fowler slipped out of the lead with a double bogey at the par-5 seventh en route to a 1-under 71. He had to take an unplayable lie after his second shot at No. 7 and eventually three-putted.

Fowler finished T3 with Keith Mitchell (67), which he called “a big step in the right direction” after failing to qualify for the FedEx Cup Playoffs last season. It’s his best finish since March 2019, when he tied for second at the Honda Classic.

“It felt good to finally hit the golf ball properly, at least most of the time, for 72 holes,” Fowler said. “A lot of quality shots, a lot of good swings this week.”

Normally played in South Korea as part of the tour’s Asian swing, the CJ Cup was held in the Las Vegas area for the second straight year due to COVID-19 pandemic travel restrictions.

In his almighty fury, Rory McIlroy acted more like Hulk Hogan than Ben Hogan. These were unprecedented shirt-ripping scenes more befitting to World Wrestling Entertainment than the European Tour, as the raging Northern Irishman tore apart his Nike top when his desert meltdown handed America a piece of golfing history.
GOLF・14 DAYS AGO
golfmagic.com

As we saw at the weekend, Rory McIlroy showed his passion for golf as he was pictured with his shirt torn to pieces after he finished tied sixth at the DP World Tour Championship. The four-time major champion made three bogeys in his final four holes. Collin Morikawa went on...
GOLF・11 DAYS AGO
dallassun.com

Collin Morikawa and Rory McIlroy have committed to the Abu Dhabi HSBC Championship, the season-opening event for the 2022 DP World Tour season on Jan. 20-23. Morikawa is coming off a victory at the DP World Tour Championship, where he overtook McIlroy on the weekend en route to a three-shot victory.
GOLF・8 DAYS AGO
Golf Digest

This Rory McIlroy putt is not safe for public consumption

Despite the low scores at the Hero World Challenge, Albany has proven to be surprisingly frisky over the first 36 holes. That's bound to happen if the wind picks up even slightly in the Bahamas , especially with lightning-quick greens. Rory McIlroy found this out the hard way on Friday,...
GOLF・1 DAY AGO

Rory McIlroy ripped shirt in anger after bad final round

Rory McIlroy entered the final round of the DP World Tour Championship in Dubai on Sunday as the 54-hole leader, but he finished five shots back of winner Collin Morikawa followed a brutal collapse. It would be an understatement to say the four-time major champion was unhappy with his performance.
GOLF・14 DAYS AGO
InsideHook

Rory McIlroy Shreds His Shirt After Melting Down at Tour Championship

As detailed by The Telegraph, star golfer Rory McIlroy ripped his shirt to threads after falling apart down the stretch during the final round at the DP World Tour Championship in Dubai after entering the day with a one-shot lead. A poor chip shot on the 14th hole cost the...
GOLF・13 DAYS AGO
The Independent

Rory McIlroy’s frustrations boiled over in remarkable fashion after Open champion Collin Morikawa became the first American to win the Race to Dubai in emphatic style with victory in the DP World Tour Championship.Morikawa carded a closing 66 at Jumeirah Golf Estates to finish 17 under par, three shots clear of defending champion Matt Fitzpatrick and Sweden’s Alexander Bjork.McIlroy held a two-shot lead when he birdied the second but eventually slipped to a tie for a sixth with a disappointing 74, the Northern Irishman appearing to rip his shirt open in the recording area behind the 18th green.McIlroy had suffered...
GOLF・14 DAYS AGO
Tennis World Usa

In Dubai, a double bogey on hole 18 (the last of the day, a par 5) costs dearly to Rory McIlroy who loses the leadership of the DP World Tour Championship and slips to fourth place with a score of 135 (-9). In the United Arab Emirates, halfway through the race, with a total of 134 (-10), Irish Shane Lowry, American John Catlin and English Sam Horsfield lead the standings.
GOLF・14 DAYS AGO

Rory McIlroy lost his lead. In a bizarre scene on Sunday during the DP World Tour Championship, McIlroy tore apart his golf shirt following a final round in which he lost his one-shot lead entering the day and tumbled to a tie for sixth. The incident was first reported by the Telegraph’s James Corrigan, and you can read his report here.
GOLF・14 DAYS AGO
BBC

Golf can be a stressful game at the best of times and, on Sunday at the DP World Tour Championship, that was clear to see, as four-time Major champion Rory McIlroy ripped his shirt following a disappointing finish to his tournament. With only a handful of holes left to play...
GOLF・14 DAYS AGO
Golf.com

NEW PROVIDENCE, Bahamas — If you, dear golf reader, felt curious about Tiger Woods’ first public reappearance, take solace in knowing that other PGA Tour pros were keyed in too. Dressed in a red shirt with a Nike swoosh (a sartorial coincidence, though an unintentional nod to the tournament host)...
GOLF・3 DAYS AGO

Rory McIlroy: "I have many happy memories"

Rory McIlroy returns for a 12th appearance as he chases a maiden Abu Dhabi HSBC Championship victory, having come close on numerous occasions – the 32-year-old boasts four runner-up finishes as well as four third-placed finishes. The four-time Major winner wrapped up his 2021 campaign with a tied sixth place...
GOLF・9 DAYS AGO
SkySports

Rory McIlroy has confirmed he will play back-to-back Rolex Series event in January after adding the Slync.io Dubai Desert Classic to his early 2022 schedule. The former world No 1 is a two-time winner on the Majlis Course, having claimed his first professional title at the event in 2009 and registered a three-shot victory in the 2015 contest.
GOLF・5 DAYS AGO
golfmagic.com

Rory McIlroy has drawn comparisons with his beloved Manchester United where his golf game has been concerned in recent times. McIlroy was speaking to the media ahead of his final event of 2021 at this week's Tiger Woods-hosted Hero World Challenge event at Albany in the Bahamas. rory7899.png. The Northern...
PREMIER LEAGUE・3 DAYS AGO
Golf.com

Rory McIlroy addressed his shirt-tearing rage. Here’s why all golfers can relate

There are many words that can be used to describe Rory McIlroy when he sits down to meet the press: thoughtful, smart, honest, engaged, funny. On Wednesday, he was annoyed, for a moment or two, anyway. His frustration, in his Hero World Challenge pre-tournament presser, came after the third time...
GOLF・3 DAYS AGO
thelines.com

Coming off of a victory at THE CJ CUP @ SUMMIT, Rory McIlroy, the No. 13 player in the Official World Golf Rankings, is listed at +350 to win the 2021 Hero World Challenge at Albany. This article references betting data current as of December 2, 2021 at 7:20 PM...
GOLF・5 DAYS AGO
Herald-Palladium

NASSAU, Bahamas (AP) — Rory McIlroy has gone from tears at the Ryder Cup to some of his best golf of the year, and right now his only complaint is the calendar. “I wish it was the end of March,” McIlroy said Thursday after a 6-under 66 to share the lead with Daniel Berger and Abraham Ancer in the Hero World Challenge.
GOLF・2 DAYS AGO
The Guardian

Rory McIlroy shot a six-under-par 66 to share the first-round lead with Daniel Berger and Abraham Ancer at the Hero World Challenge in the Bahamas.McIlroy – who had missed an opportunity to clinch victory at the DP World Tour Championship after holding a 54-hole lead – recovered from a double-bogey seven on the ninth to sink two quick birdies followed by an eagle at the 14th to help set the early pace.Berger could also have seen a better round, starting with four birdies and then an eagle on the par-five 11th, only for bogeys at the next and on the...
GOLF・2 DAYS AGO