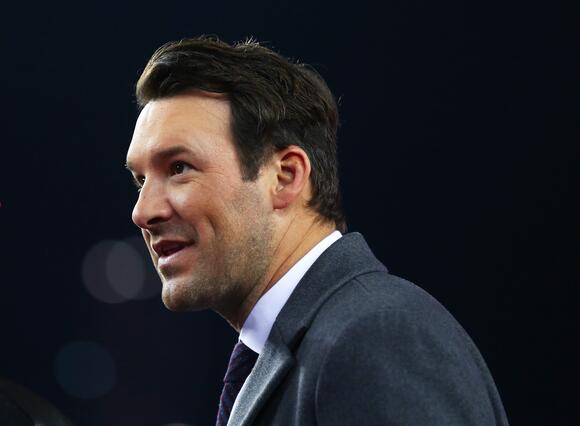 Bill Belichick wasn’t the only previously immortal football character who lost his luster Sunday night during the Cowboys’ thrilling overtime win over the Patriots.

Tony Romo did as well.

For the last three seasons, Romo was widely lauded as the best color analyst in pro sports, including by this humble blogger. He was on top of the action and more cognizant of game situations than most coaches. His penchant for predicting plays even earned him a monicker: “Romostradamus.”

But those days are gone. The Tony Romo who showed up to Foxborough Sunday was loud, confused and bordering on offensive. His gabfest with Jim Nantz following a segment about cancer patients enjoying a spa day at Gillette Stadium was downright cringeworthy.

Does anybody know what these two golf buddies were getting at?

“I’d like to enjoy a day of manicures, yoga, candle lighting. Maybe a little relax …,” Romo said before abruptly cutting himself for the first time.

Then his awkward ribbing of Nantz continued.

“You’re big into candle-making. Don’t lie!,” Romo shouted. “That’s your favorite thing on the side. Tell the people.”

Nantz countered with a line about how Romo enjoys pedicures (how girly)! The ex-quarterback tried to respond with another retort, but seemed to combust mid-sentence — or stop himself from saying something career-ending. One of the two.

His verbal panting while CBS showed video of Jerry Jones and Robert Kraft embracing before the game was just as uncomfortable.

Those weren’t the only times Romo didn’t make any sense at all. His breakdown of the first half consisted of the following: “I have not seen a game like this where it’s just shocking thing after shocking thing over and over — with high-level play,” he said. “Everything I’m like, ‘Woah! They do that? No. That can’t happen, can it?’

After realizing it was 4th-and-1, Romo reversed course.

The early fawning over Romo was probably more reflective on the sorry state of NFL broadcasts than his ability to analyze games. He enjoyed the good fortune of replacing Phil Simms, who was dreadful.

But at this point, Romo is more about presentation than substance. He’s also fallen into the trap of repeating his talking points endlessly. It seemed like Romo told viewers dozens of times the Cowboys are Super Bowl contenders — even as McCarthy bungled his late-game timeouts and clock management.

Oh, and don’t forget about Kellen Moore. If he’s not a head coach by next season, then something is wrong.

In a way, the brilliance of the ManningCast has exposed Romo. Peyton Manning knows everything about quarterback play and is funny as hell. By comparison, Romo seems boorish.

Now, it’s probably wrong to judge Romo on just one game. Since the Patriots are a losing team, we’ve been stuck with CBS’ “D-team” this season, and it’s probably only going to get worse.

Who’s ready for James Lofton to call next week’s thriller against the Jets?

On second thought, that might not be much of a downgrade. Romo is not a revolutionary analyst. He just plays one on TV.

Romo is easily the best color commentator in the biz right now. Lots of insight, enthusiasm and humor. Whats not to like?!

What he's a football Player. what do want or expect. I actually find him very knowlegable about commentating football games. But yur but in a booth and try to keep things moving for the length of a game can't be easy...

Tony Romo was criticized on social media Sunday after seemingly defending Aaron Rodgers over the fallout from his vaccine status during CBS’ broadcast of the Green Bay Packers-Seattle Seahawks game. The former Dallas Cowboys quarterback applauded Rodgers for taking "responsibility" over "misleading" fans about his vaccine status when he told...
NFL・13 DAYS AGO
The Spun

With two losses in just five days, a lot of the luster has come off the Dallas Cowboys. But Cowboys owner Jerry Jones doesn’t plan on hitting the panic button anytime soon. In an interview with 105.3 The Fan on Friday, Jones lamented that his team couldn’t put enough pressure on Las Vegas Raiders quarterback Derek Carr yesterday. But he made it clear that the defense will improve and “the sky is not falling.”
NFL・3 DAYS AGO
The Spun

Dallas Cowboys fans have had growing concerns about the injury status of running back Ezekiel Elliott. Elliott has been playing through some knee pain. Earlier on Sunday, head coach Mike McCarthy was asked about Elliott’s status. “I haven’t seen Zeke since Thursday, so we’ll just go through the normal process....
NFL・21 HOURS AGO
thespun.com

There were a lot of rough moments for the Dallas Cowboys in yesterday’s game against the Las Vegas Raiders. But the low point might have been seeing one of their players ejected for a fight. Cowboys special teams player Kelvin Joseph got into a scuffle with Raiders special teams player...
NFL・3 DAYS AGO

Who is CeeDee Lamb’s Girlfriend? Know all about Crymson Rose

Cedarian Lamb, popularly known as “CeeDee,” is a star wide receiver who features for the Dallas Cowboys of the National Football League. Born on April 8, 1999, CeeDee played college football at Oklahoma where he achieved great laurels. In the 2017 season, he featured in all 14 games, posting 46 receptions for 807 yards and seven touchdowns.
NFL・2 DAYS AGO
bleachernation.com

Nagy’s Flops After the Bye, Making a Fool of Romo, Big Money on the Bench, and Other Bears Bullets

If you put yourself through that Bears game as a fan, then this is your reminder that you should treat yourself to something nice today. • And to think. About 24 hours ago, things were looking bright for the Chicago Bears:. • Again, no one does tongue-in-cheek tweets like the...
NFL・7 DAYS AGO
mediaite.com

Tony Romo Commends Aaron Rodgers for ‘Taking Responsibility’ After Anti-Vax Interview: ‘He Felt the Weight of it’

The NFL quarterback brotherhood held strong Sunday afternoon when CBS analyst and former Cowboys signal caller Tony Romo commended Aaron Rodgers’ second attempt at explaining why he lied about his vaccination status. Rodgers has been widely criticized for telling people he was immunized against Covid-19 earlier this year, despite refusing...
NFL・14 DAYS AGO
The Spun

Jerry Jones made his opinion on the officiating in Thursday afternoon’s Dallas Cowboys vs. Las Vegas Raiders game extremely clear. The Cowboys fell to the Raiders, 36-33, in overtime on Thursday. Dallas dropped to 7-4 on the season with the loss, while Las Vegas improved to 6-5. The game was...
NFL・3 DAYS AGO

Another week, another big game for Tony Romo. The former Dallas Cowboys quarterback, who played in several big games over the course of his NFL career, now calls one each week for CBS. Romo, Jim Nantz and Tracy Wolfson are on the call for Sunday afternoon’s game between the Packers...
NFL・14 DAYS AGO
Fort Worth Star-Telegram

When it comes to history of Dallas Cowboys QBs, Dak Prescott is better than Tony Romo

One week after playing one of the worst games of his NFL career, quarterback Dak Prescott played like the MVP candidate that he is in the Cowboys’ 43-3 win over the Atlanta Falcons on Sunday. Whatever concerns, or fears, you may have had that Jerry Jones and the Dallas Cowboys...
NFL・14 DAYS AGO
99.9 KTDY

The Las Vegas Raiders defeated the Dallas Cowboys on Thanksgiving Day and like a lot of Cowboys fans across the country, this guy wanted none of it.
NFL・2 DAYS AGO
USA Today

Is this the best Cowboys team of the last 25 years? Tony Romo weighs in

While the Cowboys haven’t made the Super Bowl in the last 25 years they had pretty special teams in 2007 and 2014, both teams Romo was QB for. Romo compares those teams to this current Cowboys squad.
NFL・11 DAYS AGO

Setting your fantasy football flex rankings for Week 11 will involve some extremely tough decisions. With injuries and bye weeks removing some intriguing options, what does the depth look like when it comes to those final roster spots?. The below rankings are intended as a guide for half-PPR formats. They...
NFL・8 DAYS AGO
670 The Score

Tony Romo's optimism about the Bears had Twitter really confused

The Bears lost in an embarrassing fashion to the Ravens on Sunday, and optimism in Chicago is as low as it’s been all season – unless you’re CBS analyst Tony Romo, apparently.
NFL・7 DAYS AGO
HollywoodLife

Could Tom Brady really have a never-ending football career? Former Dallas Cowboys QB Tony Romo seems to think so! He dished to HL his thoughts on the GOAT!. Tony Romo knows good football, and the former Dallas Cowboys quarterback and current CBS Sports lead color analyst told HollywoodLife.com in an EXCLUSIVE interview that he believes Tom Brady‘s career is “never going to end.” “I think it’s going to go on forever!” he said, while promoting his current (and hilarious) ad-spot with Tostitos. “I think he actually out a while ago, how to almost make his body come back every day, as if he’s young. In other words, he found a formula that I truly believe, is the formula to have longevity.”
NFL・6 DAYS AGO
USA TODAY Sports Media Group

Thanksgiving was apparently a day of coin toss drama. Earlier on Thursday there was a ridiculous Lions-Bears coin toss in which Chicago tried to defer after Detroit did so. But then there was overtime in the Dallas Cowboys and Las Vegas Raiders game, and Vegas tight end Foster Moreau hesitated with his coin toss call: “Gonna be … heads!”
NFL・3 DAYS AGO
CBS Sports

The Ravens received some pretty devastating news when it came down that Lamar Jackson couldn’t go today due to illness. But all is not lost, according to CBS TV analyst Tony Romo. The former Cowboys QB actually thinks the Ravens offense won’t look too different than it does when Lamar...
NFL・8 DAYS AGO
profootballnetwork.com

My top-three RB handcuffs have remained the same the past two seasons: AJ Dillon, Alexander Mattison, and Tony Pollard. The combination of talent and offensive prowess has made these guys must-roster assets in every fantasy football league. Heading into the Cowboys’ Week 12 Thanksgiving game against the Lions, should fantasy managers start Pollard as a top-24 RB?
NFL・4 DAYS AGO
NESN

Tony Romo has had some memorable calls of NFL games during his time in the booth, and the latest came Thursday night. Romo’s former Dallas Cowboys team went to overtime against the Las Vegas Raiders, and tight end Foster Moreau hesitated before saying heads. The call ended up being tails and Dallas got the ball, and Romo had a field day with how Moreau handled the coin toss.
NFL・3 DAYS AGO