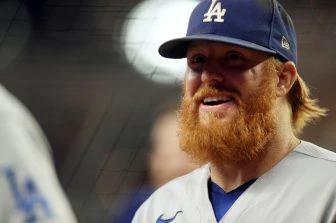 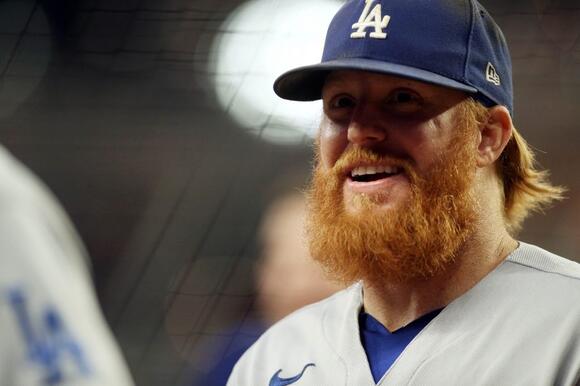 The veteran third baseman has a stinger in the right side of his neck and was not in the lineup for Game 2 of the National League Championship Series in Atlanta.

Chris Taylor was scheduled to start at the hot corner for Los Angeles.

Manager Dave Roberts said Turner’s injury occurred during batting practice before the Dodgers’ 3-2 loss to the Braves in Game 1 on Saturday night.

“We did treat it, and he felt he wanted to give it a go and try to play through it,” Roberts said. “He couldn’t turn his head to the right. And got through the game, woke up feeling very similar.” 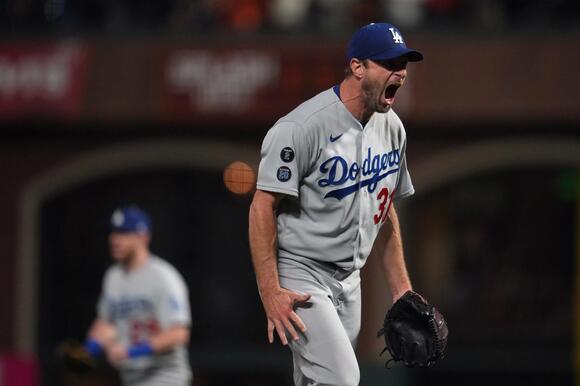 Roberts said Turner could come off the bench for an at-bat on Sunday. He is expected to be back in the lineup for Game 3 in Los Angeles on Tuesday afternoon.

Turner, who singled and struck out twice in four at-bats in Game 1, has started every playoff game for the Dodgers since Game 4 of the 2014 National League Division Series against the St. Louis Cardinals.

Turner batted .278 with 27 homers and 87 RBIs in 151 games during the regular season, but he is hitting just .107 with one homer and one RBI in seven postseason games.

A familiar name is back on the market. The Orange County Register reports the Los Angeles Dodgers designated outfielder Billy McKinney for assignment last week. MLB clubs faced a Friday deadline to set their 40-man rosters ahead of next month’s Rule 5 Draft. If McKinney passes through waivers, he could...
MLB・5 DAYS AGO
FanSided

The Texas Rangers are trying to become the Los Angeles Dodgers

There’s only one Los Angeles Dodgers baseball team, but it seems like the Texas Rangers are trying their hardest to emulate them. The Dodgers are one of MLB’s success stories of the last half-decade or so, having made the playoffs every year since 2013 and winning a World Series in 2020. Their strong player development has churned out diamonds in the rough like Chris Taylor and Max Muncy while also promoting multiple top prospects to the highest level. But they’re also not afraid to be aggressive with money when necessary, finding ways to constantly upgrade their roster (i.e. the Trea Turner/Max Scherzer deal this past season).
MLB・5 DAYS AGO
audacy.com

Seven years after signing a $210 million deal with the Washington Nationals in free agency -- which we ranked as one of the greatest deals in MLB history -- Max Scherzer is again a free agent. And even as he prepares for his age-37 season, Scherzer remains among the best...
MLB・22 DAYS AGO
FanSided

The Los Angeles Dodgers, possessors of a Super Rotation and unparalleled depth at the start of the 2021 season, somehow have a lot of work to do to maintain continuity out west. After all, they were already humbled this fall when the San Francisco Giants ended their streak of NL...
MLB・11 DAYS AGO

The Dodgers acquired Turner along with Max Scherzer from Washington at the July 30 trade deadline, and both were at the top of their game with the Dodgers. Scherzer led the National League in pitching fWAR starting with July 31, while Turner was sixth among position players. Turner joining the Dodgers required a sacrifice.
MLB・12 DAYS AGO
Dodgers Nation

With Clayton Kershaw and Max Scherzer hitting free agency this season, Dustin May out until at least next August as he recovers from Tommy John surgery, and Trevor Bauer’s future with the team up in the air, the Dodgers have holes to fill in the starting rotation. Walker Buehler and Julio Urías are the only sure locks as of right now.
MLB・13 DAYS AGO
MLive.com

Beau Burrows is headed to Los Angeles. The 2015 first-round draft pick of the Detroit Tigers announced on his personal Twitter account Tuesday evening that he has agreed to a minor-league contract with the Los Angeles Dodgers, which will likely include a Spring Training invitation in March of 2022. Burrow...
MLB・3 DAYS AGO
FanSided

Of all of the free agent shortstops on the market this offseason, the Los Angeles Dodgers reportedly have their eyes on one of them and only one of them. It’s the one they know best: Corey Seager. According to Jon Heyman of MLB Network on Twitter, the Dodgers are looking...
NFL・4 DAYS AGO

ARLINGTON, Texas -- The Texas Rangers acquired outfielders Billy McKinney and Zach Reks from the Los Angeles Dodgers for cash in a deal announced Monday. McKinney is a Dallas native who was Oakland's first-round amateur draft pick in 2013. He has appeared in the majors in each of the past four seasons and played at least 37 games for three different teams in 2021.
MLB・5 DAYS AGO
FanSided

The last time Joe Kelly walked off the mound as a Los Angeles Dodgers pitcher, it was due to an injury to his pitching arm that sidelined him for the rest of the 2021 postseason. It was a fitting end for a pitcher who was brought in to be the perfect setup man for closer Kenley Jansen, but either because he was too injured or too wild, expectations never met reality.
MLB・6 DAYS AGO
dodgerblue.com

The Los Angeles Dodgers extended the $18.4 million qualifying offer for the 2022 season to Corey Seager and Chris Taylor ahead of the deadline but as expected, both players declined it in favor of proceeding with free agency. Since the qualifying offer was implemented in 2012, only 11 of 110...
MLB・4 DAYS AGO

The Los Angeles Dodgers saw several key contributors from their bullpen reach free agency the morning after the World Series concluded, including Kenley Jansen and Corey Knebel. Joe Kelly later joined the group after his $12 million team option for the 2022 season was declined in favor of a $4 million buyout.
MLB・1 DAY AGO
dodgerblue.com

The Los Angeles Dodgers Foundation (LADF) and several players, including Mookie Betts, Tony Gonsolin and Justin Turner, among others, were active in the community over the past week to help give back to those in need for the Thanksgiving holiday. Betts, his fiancé Brianna Hammonds, mother and other family members...
LOS ANGELES, CA・2 DAYS AGO
Dodgers Nation

Dodgers: Justin Turner Talks Where He’s at with his Hamstring Injury

As we settle into the long, cold offseason, it gives players much needed time to rest, recharge, and importantly, recover from any injuries suffered last season. And Dodgers’ third baseman Justin Turner is fully taking advantage of the opportunity. Turner’s postseason ended early after he suffered a grade 2 hamstring...
MLB・1 DAY AGO
Sportsnaut

As the 2021 season concludes, baseball fans and teams are excited for the exciting crop of MLB free agents who
NFL・4 HOURS AGO
NJ.com

That’s how some teams approach MLB free agency, including the New York Yankees, who are just two years removed from handing ace Gerrit Cole a record-setting nine-year, $324 million contract. Expect general manager Brian Cashman to do some more spending this winter, according to SNY MLB insider John Harper, who...
MLB・19 DAYS AGO
Boston

One of MLB’s fastest players — if not the fastest — is coming to Boston. The Red Sox announced Friday afternoon that they had claimed speedster outfielder Tim Locastro off waivers from the New York Yankees. Locastro, a 29-year-old who has played with Los Angeles Dodgers, Arizona Diamondbacks, and Yankees,...
MLB・22 DAYS AGO
The Spun

Former Mets pitcher Pedro Feliciano reportedly passed away in his sleep on Sunday night. ESPN’s Eduardo Perez first had the news on his Twitter account on Monday morning. Feliciano was just 45 years old and was reportedly jet skiing on Sunday with his family. Feliciano played nine seasons in the...
MLB・19 DAYS AGO
wesb.com