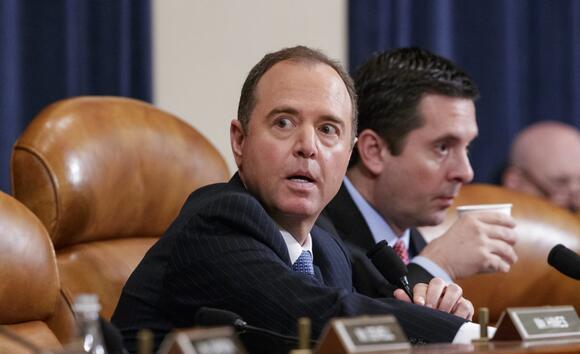 FBI Director Christopher Wray assured Rep. Adam Schiff he would resign before being pressured into "something that wasn't right" under former President Donald Trump, the congressman claims in a new book.

The conversation happened during one of their early meetings, according to Midnight in Washington: How We Almost Lost Our Democracy and Still Could , Schiff's book released last week.

"In one of our first meetings, I had warned him about how many good people the president had chewed up and spat out," the California Democrat wrote, Insider reported .

"I don't need this job," Wray told Schiff, according to the book. "And I would leave it before I ever felt the need to do something that wasn't right."

Wray, a former Justice Department official and private practice lawyer, was nominated and confirmed in 2017 to become the eighth director of the FBI for a 10-year term after Trump fired Director James Comey . Trump called Wray “a man of impeccable credentials," and in 2018, he said Comey had sullied the FBI’s reputation but Wray would "bring it proudly back.”

But that admiration appeared to fade over time. Trump and conservative allies also criticized Wray, whose job seemed to be in jeopardy toward the end of the prior administration. "He has been disappointing," Trump said in October 2020 , reacting to Wray dismissing voter fraud concerns.

Schiff, the top Democrat on the House Intelligence Committee, who became chairman in 2019, wrote that Wray was "one of the few remaining agency heads appointed by Trump who was still willing to speak truth to power."

President Joe Biden decided to keep Wray , which earned plaudits from Schiff in early January after the inauguration.

“Christopher Wray became FBI Director at a moment of tremendous turmoil for the Bureau and the country, and he has served with great professionalism and integrity," said Schiff , who cited investigations into "the intelligence and security failures that led to the January 6th assault on the Capitol, and the need to dramatically expand the focus and resources devoted to the threat of domestic terrorism."

Adam Schiff has propitiated so many lies & propaganda that was used to impeach President Trump and if he & Wray doesn’t get indicted by the Durham Report they’ll not be any true justice!

Ummm…. Have you seen what is happening NOW! We already are losing our democracy! We have a President dictating with an or else you don’t eat. Stalin did that!

Assurances that President Joe Biden will seek reelection in 2024 have done little to silence speculation among Democrats over his potential successor.
PRESIDENTIAL ELECTION・17 HOURS AGO
WashingtonExaminer

Following the jury's acquittal of Kyle Rittenhouse, the teenager who beat felony homicide charges over the deaths of two protesters in Kenosha, Wisconsin, legal analysts contend any follow-up civil rights case "will fail" if prosecutors push for one.
PUBLIC SAFETY・17 HOURS AGO

President Joe Biden’s decision to impose additional air travel restrictions on South Africa and seven other countries in response to a new COVID-19 strain is being contrasted with his response to similar policies under former President Donald Trump.
WASHINGTON, DC・15 HOURS AGO
WashingtonExaminer

Ukraine claims that it has found evidence of Russia helping an unidentified group plan a coup in the immediate future.
POLITICS・1 DAY AGO
WashingtonExaminer

Rep. Lauren Boebert, a Colorado Republican, is under fire for a story she told about Rep. Ilhan Omar, a Minnesota Democrat, while speaking at a Thursday campaign event.
PUBLIC SAFETY・1 DAY AGO
WashingtonExaminer

The Debrief with Byron York — Nov. 27

Chief Political Correspondent Byron York joins Sarah Westwood for "The Debrief," a look at the top stories of the week and what to expect moving forward.
POLITICS・19 HOURS AGO
WashingtonExaminer

Beto O'Rourke raises $2M in 24 hours for long-shot gubernatorial bid. Will it help?

Texas Democratic gubernatorial candidate Beto O'Rourke raised $2 million dollars in the first 24 hours of his bid, his campaign told the Texas Tribune. The former congressman has previously reported impressive fundraising numbers in unsuccessful bids for the Senate and the White House, leaving some asking if this race is any different.
PRESIDENTIAL ELECTION・1 DAY AGO

The Debrief with David Drucker — Nov. 27

Senior Political Correspondent David Drucker joins Sarah Westwood for "The Debrief," a look at the top stories of the week and what to expect moving forward.
POLITICS・19 HOURS AGO
WashingtonExaminer

Hillary Clinton had a coughing fit during an appearance on the Rachel Maddow Show on Tuesday.
CELEBRITIES・3 DAYS AGO
WashingtonExaminer

The polyp removed during President Joe Biden's first colonoscopy in office was identified as a "tubular adenoma" that requires no further action, according to the White House physician.
POTUS・3 DAYS AGO
WashingtonExaminer

A day after the Biden administration filed documents seeking to reinstate its workplace vaccine-or-test mandate, court battles over its legality rage on as new suits continue to accumulate.
U.S. POLITICS・3 DAYS AGO

Is it time for cancel culture to be canceled?
WASHINGTON, DC・13 HOURS AGO
WashingtonExaminer

When the story of the 2022 midterm elections is finally told, it could be that it motivated a generation of military veterans horrified by the botched withdrawal from Afghanistan to enter politics.
FLORIDA STATE・2 DAYS AGO
WashingtonExaminer

President Joe Biden released a statement following the conclusion of the Ahmaud Arbery case, praising the guilty verdicts while adding they were "not enough."
PUBLIC SAFETY・3 DAYS AGO