Netflix and Tesla will look to buck the earnings-slowdown trend 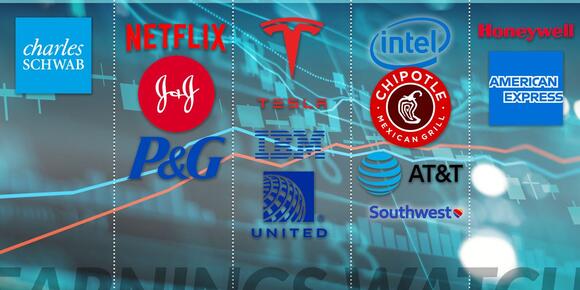 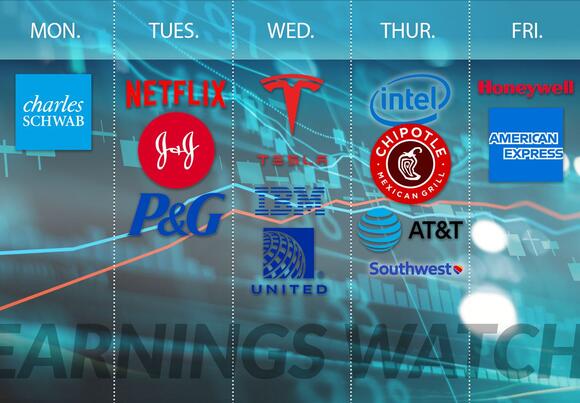 While earnings growth is expected to slow down appreciably for many companies from a record-breaking first half, two prominent companies are projected to put up big numbers this week.

Netflix Inc. (NFLX) and Tesla Inc. (TSLA) are scheduled to report earnings on back-to-back afternoons in the coming week, Tuesday and Wednesday respectively, and face big expectations. Their performances could help push the overall earnings trajectory for the S&P 500 index higher, with early reports already pushing initial projections for 27.5% growth higher than 30% heading into the busiest week yet of earnings season.

Netflix’s stock was in the penalty box for much of the past year, after a huge surge in subscriptions early in the COVID-19 pandemic petered out in the third quarter last year. After treading water for roughly 10 months after last September’s report, shares have jumped in recent months, adding more than 15%, as analysts expect nearly 50% earnings growth for the third quarter.

Optimism stems from some big original-content releases, including the biggest hit yet from the streaming-media pioneer. “Squid Games” has already surpassed all other Netflix originals in terms of first-month viewership, the company says, and there is much more on the way as the pandemic-related slowdown in content production loosens and a flood of new shows arrives in the fourth quarter, making the forecast as important as the completed numbers.

Full earnings preview: Can ‘Squid Game’ and videogames be game-changers for Netflix?

“We believe Netflix has entered a favorable setup following the sub-add pull-forward-induced trough,” Stifel analyst Scott Devitt wrote last week, after increasing his price target on the stock to $650 from $580 in September. “We forecast accelerating sub additions through the balance of the year supported by compelling new and original releases, continued international penetration, and seasonally favorable periods for sub adds.”

Tesla is expected to grow earnings by more than 85% in the third quarter, as it also finds success in Asia. After a rough start to 2021 in China, Tesla reported strong sales there in September, and continued demand in foreign markets is expected to keep the electric-car company rolling through the rest of 2021.

Tesla production had been held back by the semiconductor shortage that is affecting the entire automotive industry, but Tesla still managed to deliver more than 240,000 cars in the quarter, up from less than 140,000 in the same quarter last year. And Wedbush analyst Daniel Ives believes that the big surge in China sales in September portends big things to come.

“We believe in the month of September alone, Tesla delivered roughly 150k vehicles and is a clear indicator of this green tidal wave taking hold for Musk & Co. across the board,” the analyst wrote last week.

Those two will be among 80 S&P 500 companies expected to report in the week ahead, the busiest week so far this young earnings season. Here are some other results to check:

Eight of the 30 Dow Jones Industrial Average (DJIA) components are on the schedule in the coming week, while FactSet reports 80 S&P 500 (SPX) companies are expected to report. Outside the major indexes, keep an eye on Snap Inc.’s (SNAP) report on Thursday, as it should provide some insight into the online-advertising market that also drives Facebook Inc. (FB) and Alphabet Inc. (GOOGL) (GOOG)

Don’t miss: The biggest risk facing investors this earnings season is lurking just beneath the surface

Marvell will be ‘in the same camp’ as AMD, Nvidia after ‘one of the best’ semiconductor earnings calls

Shares of Marvell Technology Inc. are soaring toward their best trading day since 2008 after the chipmaker posted an earnings report that drew cheers over the company's bullish growth expectations and its ascension in the world of hot semiconductors names.
MARKETS・2 DAYS AGO
MarketWatch

The question for markets is less about when the Fed will hike and more about, how high.
BUSINESS・2 DAYS AGO
MarketWatch

The Dow has shed over 2,000 points over past month as blue-chip, stock-market index heads for 4th weekly tumble

The Dow Jones Industrial Average has shed about 2,000 points since the middle of November to this Friday, as bullish momentum unwinds. At last check, the Dow was down 360 points Friday afternoon, bringing the weekly drop to nearly 630 points, or 1.8%, and marking the fourth consecutive weekly decline for the benchmark of 30 blue-chip stocks, if the decline holds. From the weekly period started Nov. 12 to Dec. 3, the index has lost about 2,054 points. U.S. stock benchmarks were down Friday, as investors reassessed weaker-than-expected November jobs report as unlikely to stay the hand of a Federal Reserve that seems intent on tamping down inflation. Worries about the spread of the omicron variant of the coronavirus that causes COVID-19 and fears about the Federal Reserve's monetary policy plans, was helping to undercut bullish momentum on Wall Street.
STOCKS・2 DAYS AGO
KXLY

Volatility has been the name of the game lately in the stock market. Thanks to the rise of the new COVID-19 variant omicron, inflation, and the threat that the Federal Reserve may start raising interest rates, anxiety has gripped many investors. Can a market crash be coming soon?. No one...
STOCKS・20 HOURS AGO

Bargains aren't bargains if there's not much hope for a strong rebound move.
STOCKS・19 HOURS AGO
The Motley Fool

Costco is one of several widely followed stocks set to announce earnings results over the next few days.
STOCKS・13 HOURS AGO
The Motley Fool

The market may have recently lost its taste for tech companies, but the long-term outlooks for MercadoLibre, United Microelectronics, and DocuSign remain impressive.
STOCKS・18 HOURS AGO

After a tumultuous 2020, the year 2021 has been more or less straight up for the market as a whole. Barring a few selloffs throughout the year, none of which reached the double-digit percentage level, the S&P 500 has had smooth sailing. ...
STOCKS・7 HOURS AGO
24/7 Wall St.

These are five stocks for aggressive investors looking to get share count leverage on companies that have sizable upside potential. While not suited for all investors, they are not penny stocks with absolutely no track record or liquidity, and Wall Street firms do have research coverage.
STOCKS・1 DAY AGO
The Motley Fool

Crashes and corrections are the price of admission to take part in one of the world's greatest wealth creators.
STOCKS・1 DAY AGO
The Motley Fool

New to the Stock Market? 3 Investments You Can't Go Wrong With.

Start with reliable names that you know aren't going to throw you any curveballs.
STOCKS・1 DAY AGO
The Motley Fool

Why Alibaba Fell Another 22.7% in November

Shares of the Chinese internet leader fell again after it reported soft earnings.
STOCKS・1 DAY AGO
The Motley Fool

Riding the Oracle of Omaha's coattails is often a moneymaking proposition.
STOCKS・2 DAYS AGO
The Motley Fool

Which tech giant has a brighter future?
ECONOMY・1 DAY AGO
Motley Fool

Inovio's future hinges on its potential coronavirus vaccine as well as lesser-known candidates. Pinterest has been losing users, but it's likely a temporary phase that won't affect long-term plans. As we're getting close to the end of the year, it's safe to say that the stock market has performed pretty...
STOCKS・2 DAYS AGO
Markets Insider

Tesla CEO Elon Musk has sold another 934,091 shares of the electric-vehicle maker worth $1.01 billion to meet his tax obligations related to the exercise of options to buy 2.1 million shares, regulatory filings showed Thursday. In early November, the world's richest person tweeted that he would sell 10% of...
STOCKS・2 DAYS AGO
Investor's Business Daily

The Dow Jones Industrial Average slipped lower, but the Nasdaq was the major index that plunged hardest. Tesla (TSLA) took a tumble following an Elon Musk move. Boeing (BA), Microsoft (MSFT) and Apple (AAPL) were among the worst blue chips. But it was DocuSign (DOCU) investors who were most badly hurt as the stock cratered on earnings.
STOCKS・2 DAYS AGO
The Motley Fool

2 Curious Stock Winners on a Frightful Friday on Wall Street

It was interesting to see which stocks managed to post advances.
STOCKS・2 DAYS AGO