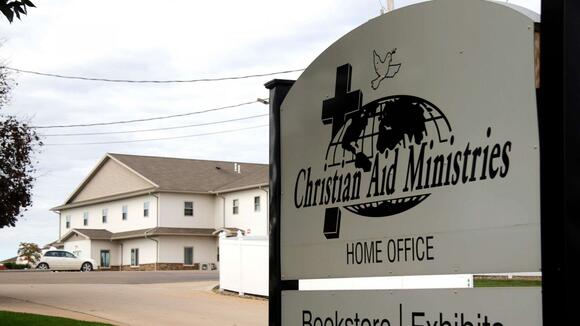 A Haitian gang has been blamed for kidnapping a group at a Haitian airport that included 17 missionaries, five of them children, according to officials.

Included in the group are 17 missionaries -- 16 Americans and one Canadian -- and two Haitian citizens, according to the U.S. Embassy. Two French priests were also kidnapped in a separate attack at the same location earlier in the day, the source said.

The Haitian government suspects the gang known as 400 Mawozo to be responsible for the abductions, the source said.

It is unclear where the victims were taken.

The FBI made contact with the 400 Mawozoa on Monday, the agency told ABC News.

"This is something that we have treated as ... with the utmost priority since Saturday," he said.

Price added that the U.S. embassy in Port-au-Prince has been in "constant contact" with Haitian national police, the missionary group Christian Aid Ministries and the victims' families.

The Ohio-based ministry Christian Aid Ministries confirmed in a statement that a group of 17 people were "abducted" while on a trip to an orphanage on Saturday. They added in a statement Monday that, "civil authorities in Haiti and the United States are aware of what has happened and are offering assistance."

"We greatly appreciate the prayers of believers around the world, including our many Amish and Mennonite supporters. The Bible says, 'The effective, fervent prayer of a righteous man avails much,' (James 5:16)," the ministry said in a statement Monday.

Five men, seven women and five children are among those abducted, according to the ministry.

Haitian police inspector Frantz Champagne told The Associated Press that the 400 Mawozo gang kidnapped the group while they were in Ganthier, about 17 miles east of Port Au Prince.

The gang has also been blamed for kidnapping five priests and two nuns earlier this year, according to The Associated Press. The country is experiencing a rise in gang-related kidnappings, many demanding ransom, that quelled after the assassination of President Jovenel Moïse on July 7 and a 7.2-magnitude earthquake on Aug. 14 that killed more than 2,200 people.

The U.S. State Department told ABC News in a statement that it is "in regular contact with senior Haitian authorities and will continue to work with them and interagency partners."

"The welfare and safety of U.S. citizens abroad is one of the highest priorities of the Department of State," the statement read.

The FBI is expected to assist in negotiations, ABC News has learned.

Additional information on the kidnapping was not immediately available.

They need to close the boarder to these people !!! Or we are going to have so many more crimes !!! If isn’t bad enough already!!! We are Americans and we have rights too!!!! Close the dam boarder!!!!! We all need to get together and get it closed!!! They say it’s closed the Vp said it was closed and that other guy with the name I can’t pronounce !!!

PORT-AU-PRINCE, Haiti — Two of the 17 foreign missionaries who were kidnapped by a notorious street gang in Haiti last month have been released, a U.S. aid group said Sunday. “Only limited information can be provided, but we are able to report that the two hostages who were released are...
PUBLIC SAFETY・10 DAYS AGO
mycolumbuspower.com

LISTEN LIVE. LIKE US ON FACEBOOK. FOLLOW US ON TWITTER. According to NBC4i, an Ohio-based church organization says two of 17 abducted members of a missionary group have been freed in Haiti. Christian Aid Ministries issued a statement Sunday saying the two “are safe, in good spirits and being cared...
OHIO STATE・10 DAYS AGO
92.7 The Block

Even though Haiti can’t seem to get a break there is a victory that has to be acknowledged. Two missionaries have been freed after being held hostage over a month. As spotted on CNN two Americans have been let go after being captured. The Christian Aid Ministries confirmed the great news after days of speculation. “We have […]
PUBLIC SAFETY・9 DAYS AGO
The Daily Record

Two of the 17 people being held hostage in Haiti have been released, according to a statement posted Sunday on the Christian Aid Ministries website. "Only limited information can be provided, but we are able to report that the two hostages who were released are safe, in good spirits, and being cared for," the post, which was time-stamped 12:15 p.m., reads.
HOLMES COUNTY, OH・10 DAYS AGO

WASHINGTON, D. C. -- The Assistant Secretary of State for Western Hemisphere Affairs told U.S. Sen. Rob Portman earlier this week that he’s been personally involved in trying to recover 15 Christian missionaries from an Ohio organization who were kidnapped in Haiti six weeks ago. During a Senate Foreign Relations...
OHIO STATE・1 DAY AGO
AOL Corp

By the time the FBI showed up to his mom’s house in Southern California to arrest him in late March, 38-year-old Donald Trump supporter Danny Rodriguez knew he was in trouble. You’d be hard-pressed to find a bigger Trump fan than Rodriguez: He even tried to join the Army when Trump became president, showing up to a recruiting office with a Trump shirt on. So when Trump said that the election had been stolen, Rodriguez actually believed him, and when the president tweeted “Be there, will be wild!” about a protest in D.C. on Jan. 6, Rodriguez started making plans.
PUBLIC SAFETY・23 HOURS AGO
Newsweek

The girl was allegedly punished for wetting the bed and was chained to a barred window in direct sunlight where temperatures reached 122 Fahrenheit.
PUBLIC SAFETY・2 DAYS AGO
Daily Beast

The family of Sativa Transue, a 26-year-old American woman from Spokane, Washington who was found dead in her Cancun hotel room while on vacation with her boyfriend, said she looked like she had been “beaten to a bloody pulp” when Mexican authorities discovered her body on Saturday. “I received a...
PUBLIC SAFETY・20 HOURS AGO

I Saw Firsthand Why Jeffrey Epstein Killed Himself

Thanks to some intrepid reporting by The New York Times, which sued the Bureau of Prisons to release documents related to Jeffrey Epstein, I woke up on Tuesday to find that my real-time observations about him were now public records, “news fit to print.”. I’m actually quoted as two different...
PUBLIC SAFETY・8 DAYS AGO
The Independent

A transgender woman was badly beaten after being forced to share a jail cell with three men last year, leaving her with a jaw fractured in two places, according to a lawsuit.Kristina Frost is suing San Diego County and its sheriff’s department for damages, accusing them of negligence and failure to protect or deliberate indifference to safety risks and needs.According to the lawsuit, Ms Frost’s driver’s licence and other paperwork said she was a woman, and she had been wearing “feminine” clothes at the time of her booking.However, she was placed against her wishes in a “minimally monitored” cell with...
PUBLIC SAFETY・16 DAYS AGO
USA Today

Fact check: Kyle Rittenhouse visited Mar-a-Lago, but not for a paid two-week vacation

The claim: Kyle Rittenhouse went to Mar-a-Lago for a 'two-week, all-expenses-paid vacation'. Immediately after the acquittal of Kyle Rittenhouse, who faced charges for killing two people and injuring another during a 2020 protest in Kenosha, Wisconsin, misinformation spread quickly on social media. Now, some online claim Rittenhouse is enjoying a sunny vacation away from the courtroom where he spent three weeks.
POLITICS・1 DAY AGO
WashingtonExaminer

Brian Laundrie's parents have put up their Florida home for sale and seem to be looking to move away weeks after the discovery of their son's remains were found in an alleged suicide case. The couple has put up "for sale" signs in the front yard of their North Port,...
NORTH PORT, FL・1 DAY AGO
Newsweek

"The world will decide who is doing nuclear madness," China's embassy spokesperson told Newsweek. "By smearing China and playing the trick of thief crying 'stop thief,' the US can only amuse itself and deceive the world."
MILITARY・28 DAYS AGO
hngn.com

The Peoples Republic of China increases Chinese hypersonic missiles to deter the US and its allies in the Indo-Pacific. As these deterrents go, these weapons could turn the tide in Beijing's favor. But the mainland government said they would not use nukes first and wanted assurance from Washington if they...
MILITARY・4 DAYS AGO
USA Today

Bodies hanging from Mexico overpasses: Powerful drug cartels are back to their old tactics

Mexico's notorious drug cartels appear to have resumed some of its bloodiest tactics, after nine half-naked and tortured bodies recently were found hanging from a bridge on a federal highway in the Mexican state of Zacatecas. Mexican authorities said a tenth body was found on the ground, apparently falling before...
PUBLIC SAFETY・3 DAYS AGO

A public health expert who gave America early warnings about Covid-19 has said that there are probably around 2,000 cases of the new omicron variant already in the US.Dr Charity Dean, a former official at the California Department of Public Health, was among the first to warn in February last year that coronavirus was almost certainly circulating among Americans who had not travelled to China.Now she believes that a similar thing is happening with omicron despite the US government’s claim that no cases yet exist in the country, according to an interview with Business Insider."I have no doubt that...
PUBLIC HEALTH・1 DAY AGO
Indy100

A new viral video is making just about everyone cringe.In the clip, an emotional alleged MAGA rioter is seen starting to cry in front of FBI interrogators as he is being questioned. When asked about former President Donald Trump calling him to Washington D.C the waterworks NBC journalist Scott MacFarlane shared the clip on Twitter. He wrote, “NEW: Court orders release of video of FBI questioning US Capitol breach defendant Daniel Rodriguez. This is a first listen in the interrogation room. He questions election, cites Biden’s rallies and says he’s long been an InfoWars fan.”NEW: Court...
PUBLIC SAFETY・23 HOURS AGO
The Associated Press

Feds: Backyard fentanyl operation could have made 2.5M pills

Alice Sebold apologizes to man wrongfully convicted for her rape: 'I will forever be sorry'

Author Alice Sebold has apologized to Anthony Broadwater, the man who was convicted of the rape at the center of her memoir Lucky in 1982, and who was exonerated of the crime last week. Broadwater served 16 years in prison after he was found guilty of raping Sebold when she...
PUBLIC SAFETY・1 DAY AGO